Fox to NC; Erceg and Pickett to Louisville: Which team got the better of the big NWSL trade? 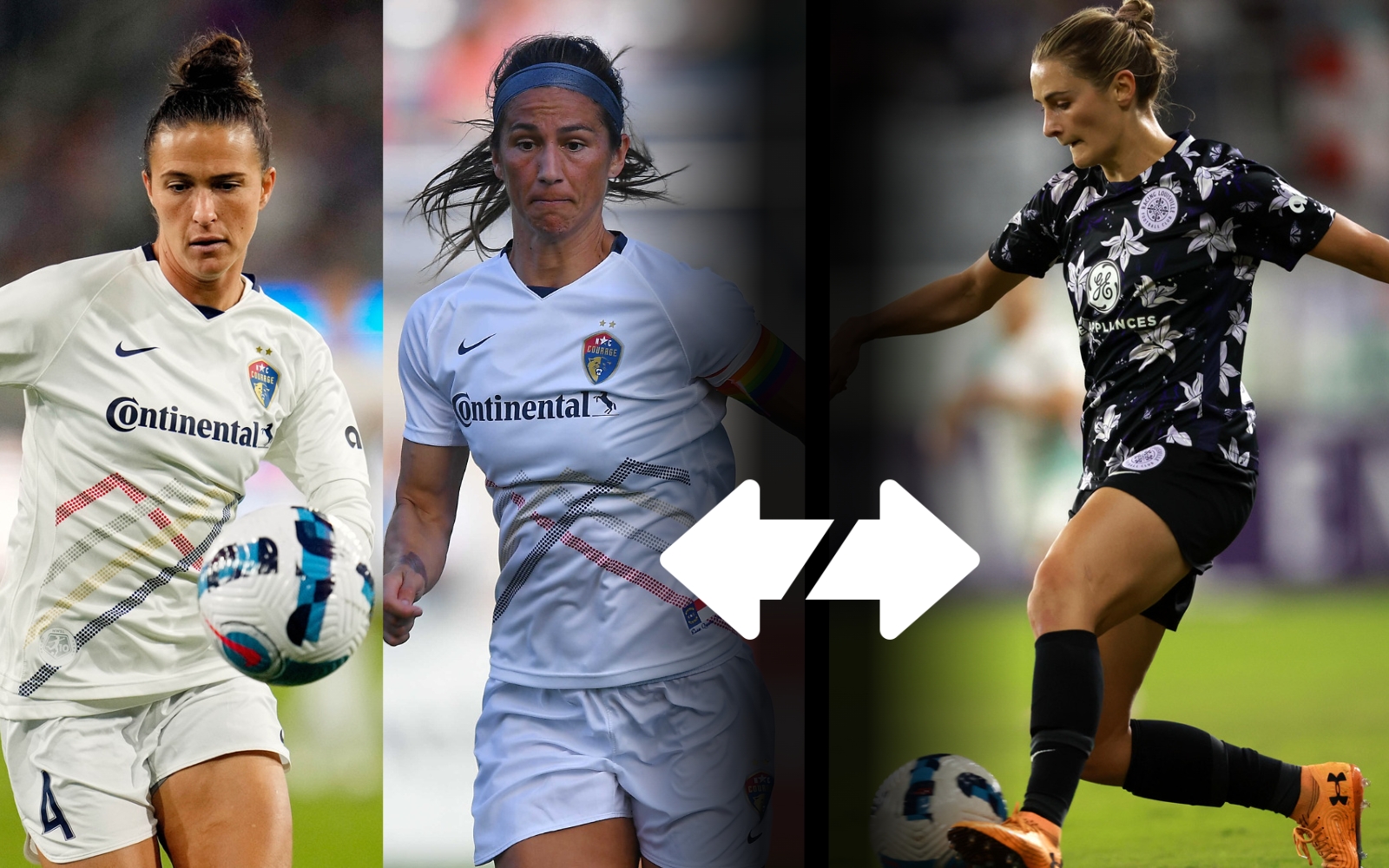 A big trade was announced on Monday to kick off the reopening of the NWSL trade window. Racing Louisville sent fullback Emily Fox to the North Carolina Courage in exchange for center back Abby Erceg and fullback Carson Pickett.

All three players are key starters for both teams, so here’s a breakdown of the upsides and the downsides of the trade, and what it means for both teams.

It was practically inevitable that one of two scenarios would play out with Emily Fox and Racing Louisville this offseason: One, she’d sign an extension, or, two, she’d be traded.

She’s a U.S. national team player who is virtually guaranteed a slot on the 2023 World Cup roster and her contract only runs through 2023. If she wasn’t going to extend, it makes the most sense to trade her now when she’s arguably at her most valuable.

The fact that she has been traded strongly implies that she wasn’t going to extend with Racing. Fox was the No. 1 pick of the 2021 college draft and an extremely popular player in Louisville. She’s one of the most dynamic fullbacks in the league with a good deal of positional versatility, and is only going to get better over time. Already,Fox is a regular with the United States national team. She’s also been a quiet leader who had been integral to locker room chemistry behind the scenes on Louisville.

In short, losing Fox after only two years is definitely painful for Racing Louisville. It could have even been catastrophic without a solid return. Luckily for Racing, a solid return is exactly what they got, although it is arguably a short-term solution.

Even before Gemma Bonner departed Louisville to return to Liverpool this offseason, Racing was in desperate need of defensive support. They gave up 35 goals last season and as talented as Fox is, she’s not able to cover the entire defense on her own, so Racing needed to add solid defenders. So, as painful as it is to lose Fox, getting two experienced veteran starters in exchange for one can be seen as a positive.

If Fox is an up-and-coming star, Pickett and Erceg are already established ones. Erceg has 160 NWSL regular-season and Challenge Cup appearances and won three NWSL Shields and three NWSL Championships with the Western New York Flash and the Courage. She’s a tough, experienced center back who’s also good in the air on set pieces. Pickett has 130 NWSL appearances, was a back-to-back Best XI selection the past two seasons, and was the 2022 assist leader. On a team that is extremely thin on players with NWSL experience, this is even more important to Racing Louisville.

Even better, they’ve played together on the same team for the last couple of years so they have built-in chemistry already. Chemistry along the back line is something Racing lacked through much of last year, so this is important. They also both have experience playing with Jessica McDonald, which may translate to better chemistry across the lines as well. Pickett has even played for Racing head coach Kim Björkegren before, during a 2020 loan to Apollon Ladies in Cyprus.

What’s more, Fox will likely be gone for a large duration of the season to play in the World Cup. Although Pickett has received recent call-ups to the U.S., she’s more of a long shot to make the 23-player roster. Erceg is a legend of the New Zealand national team, but recently announced her retirement from international play. This means both will likely be available for the whole season for Racing.

With the recent departures of Debhina and Diana Ordóñez this offseason, in addition to Erceg and Pickett, North Carolina will need to rebuild their team. Luckily for them, Fox is exactly the kind of player teams would like to build around.

At only 24, she’s likely only going to get better over time. She was a runner-up for rookie of the year in 2021 when she led the entire league in interceptions with 115. Her ability to play both sides of the field with an equal level of skill, and also move into the midfield, provides a level of versatility that is extremely desirable.

Fox also comes with some strong ties to North Carolina. As a past star of the University of North Carolina, she’s spent a lot of time in the region and likely has ties to Courage head coach Sean Nahas, whose brother Damon Nahas is an assistant at UNC. The UNC connection also spreads to midfielder Brianna Pinto, who was Fox’s teammate for all four years in college.

Just as Fox was popular in Louisville, Erceg and Pickett were extremely popular in North Carolina. Erceg had been part of this franchise in one form or another for the last seven years. In 2015, she was part of the Western New York Flash who then became the Courage when they were sold and moved to North Carolina.

On Twitter, Erceg said she intended “to see [her] career out” with the Courage and was “shocked and disappointed” by the trade. Even though she said she’s looking forward to starting in Louisville, this is not a comforting sentiment from a player departing North Carolina after they’ve already lost or traded more than five players in the offseason.

North Carolina still has some solid defenders on their squad with Kaleigh Kurtz and Ryan Williams recently re-signed, but it’ll be hard to lose Pickett and Erceg, who have become such staples of the club’s starting lineup.

Overall, this is a fairly even trade for both teams. Racing needed veteran defenders with NWSL experience and got them. North Carolina needed a dynamic young player to help rebuild around and got her.

The real question that might tip the scale in the favor of one team over the other is contract length. As it stands, no contract extensions were announced with this trade. This means Emily Fox will be a restricted free agent at the end of the 2023 season. Carson Pickett is in the same boat and will become an unrestricted free agent at the end of 2023 when her contract expires. While Erceg’s contract ends in 2023, her contract has an option for 2024.

Both teams have the chance to work out extensions with players now that their trades are final. If Fox doesn’t stay in North Carolina and both Erceg and Pickett do stay in Louisville, that would be a clear win for Racing because it’s fairly clear that Fox wasn’t going to extend anyway and stay for the long-term. And the Courage will have given up at least one player who had planned on staying in North Carolina in Erceg.

If Erceg and Pickett don’t extend, however, Racing will be the loser because they’d be back in the same boat they started in.

No matter how it pans out, however, this is a bombshell trade that drastically alters the look of both teams’ defenses. With preseason just beginning, there are undoubtedly more shakeups to come.