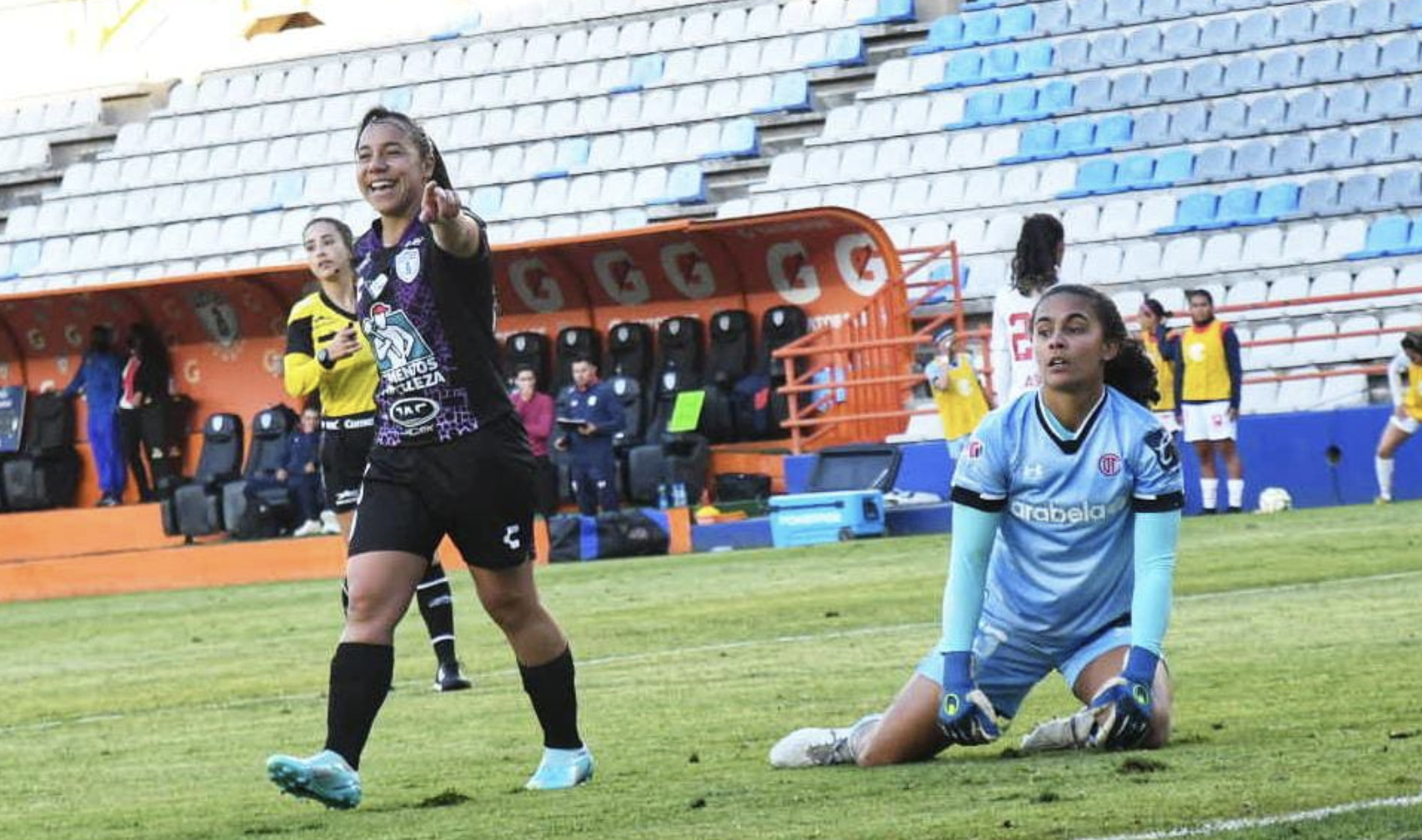 Week 1 may have produced some big score lines in Liga MX Femenil — which you can read about here — but Week 2 raised the bar. The Mexican league kicked off Week 2 with a double-digit goal performance from Pachuca, including four goals from Charlyn Corral.

Needless to say, there’s a new leader in the Golden Boot race.

However, there’s tight competition behind her, already. Uchenna Kanu and Alicia Cervantes added to their goal-tallies this week, after scoring three apiece last week. Each player tallied one goal in Week 2 to give them four. Myra Delgadillo, who has been a secret star already to start the Clausura with FC Juárez, scored in the team’s 1-0 victory over Querétaro.

Take a look at what happened in Mexico and preview the matches for Week 3.

If we went through each goal, play-by-play, this would be a long article. In league history, the biggest loss was Club América handing the former side Morelia a 12-1 thrashing. This came pretty close, and Charlyn Corral didn’t waste anytime steamrolling her opponents — particularly the Toluca backline and goalkeeper.

Six goals were scored in the first half — four of them coming from Corral — while four were scored in the second half. Pachuca also saw players Mónica Ocampo, Spanish international Jennifer Hermoso (x2), Lizbeth Ángeles, Vanessa Millsaps and Alice Soto find the back of the net.

Let’s take you through Corral’s goals. Her first, in the 13th minute, came off a simple tap-in inside the box. The second tally, in the 17th minute, was struck with her left foot after dribbling into the box, and firing from almost exactly the same spot as the first. To give herself a hat-trick, Corral faked out goalkeeper Kayla Thompson and dribbled up, looking to shoot toward the lower right side, but instead cut the ball back and fired to the left. It was a brilliant piece of playing mind-games on the goalkeeper.

Corral linked up with Hermoso on the fourth and final tally, as the Spaniard crossed inside the box and found the Mexican international, who ended the play by leaping over Thompson, who came off her line to try to block the shot. After a rough ending to the 2022 Apertura campaign, Pachuca watching their star player go on a goal-scoring spree was exactly what Tuzos needed.

They face a red-hot FC Juárez side next that held their own in Week 2 and absolutely thrashed Mazatlán in Week 1.

Ángel Villacampa and Club América kicked off their Clausura campaign in lackluster fashion in Week 1, tying with Cruz Azul, 1-1. However, in Week 2, América showed once again why they are a regular contender in the Liguilla and Liga MX Femenil.

Kiana Palacios and Scarlet Camberos each scored a brace to help lift América over a struggling Puebla side. Also finding the back of the net were María Mauleon, Sarah Luebbert and an own goal from Puebla midfielder Viridiana López. Luebbert returned to the team after a turbulent 2022. She began the year in Mexico with Club América, scoring and playing regular minutes. She struggled in Chicago, and spent the latter part of the season coming off the bench. Out of contract, she elected to sign with Club América, making a grand return. América placed their trust in the young striker, giving her the reins to step up for a penalty kick and slotting it past goalkeeper Karla Morales.

It was Camberos’ first goal, though, in the 59th minute, that was highlight-reel worthy. Camberos got her shot off before falling to the ground after a cut back, sending it to the top right corner of the net.

América will have a much tougher task in Week 3, facing off with Club Tijuana, who tied with Cruz Azul in Week 2.

Why is a 1-1 draw being highlighted? Well, it’s mainly because of who the two sides are. Club Tijuana and Cruz Azul have battled it out in the middle of the table since the beginning of Liga MX Femenil. In the recent Apertura, Tijuana sat in a nice fifth place spot, while Cruz Azul took eighth place by the skin of their teeth — and with a lot of help.

Cruz Azul, currently, sits in the middle of the pack with two draws, while Tijuana earned a Week 1 win over Toluca — albeit, not by the same scoreline that Pachuca won. However, both teams have something in common too: when they win, they don’t win by much. Usually, it comes down to goal differential, rather than points, for Cruz Azul and Tijuana.

Daniela Flores gave Cruz Azul hope of finally getting over Tijuana with an early goal. Flores scored off a corner kick, but not directly off the cross sent in by teammate Daniela Monroy. Instead, the ball found multiple feet inside the box before popping out to Flores at the top of the penalty area and she fired over the crowded box and past goalkeeper Alejandra Gutiérrez.

However, Renae Cuéllar saved the day — and a point — for Tijuana once again. The reliable striker, who has been with Xolos since 2019, scored the equalizer in the 35th minute. Cuéllar picked up the ball just inches away from the goal line after miscommunication from the defense and Cruz Azul goalkeeper Silvia Machuca.

Tijuana, as mentioned, has a tough task in Week 3, going on the road to face Club América. Meanwhile, Cruz Azul will look for their first win in the current Clausura campaign against Atlético San Luis, who beat Club León, 3-1, in Week 2.