USWNT 2022 Year in Review: A changing of the guard 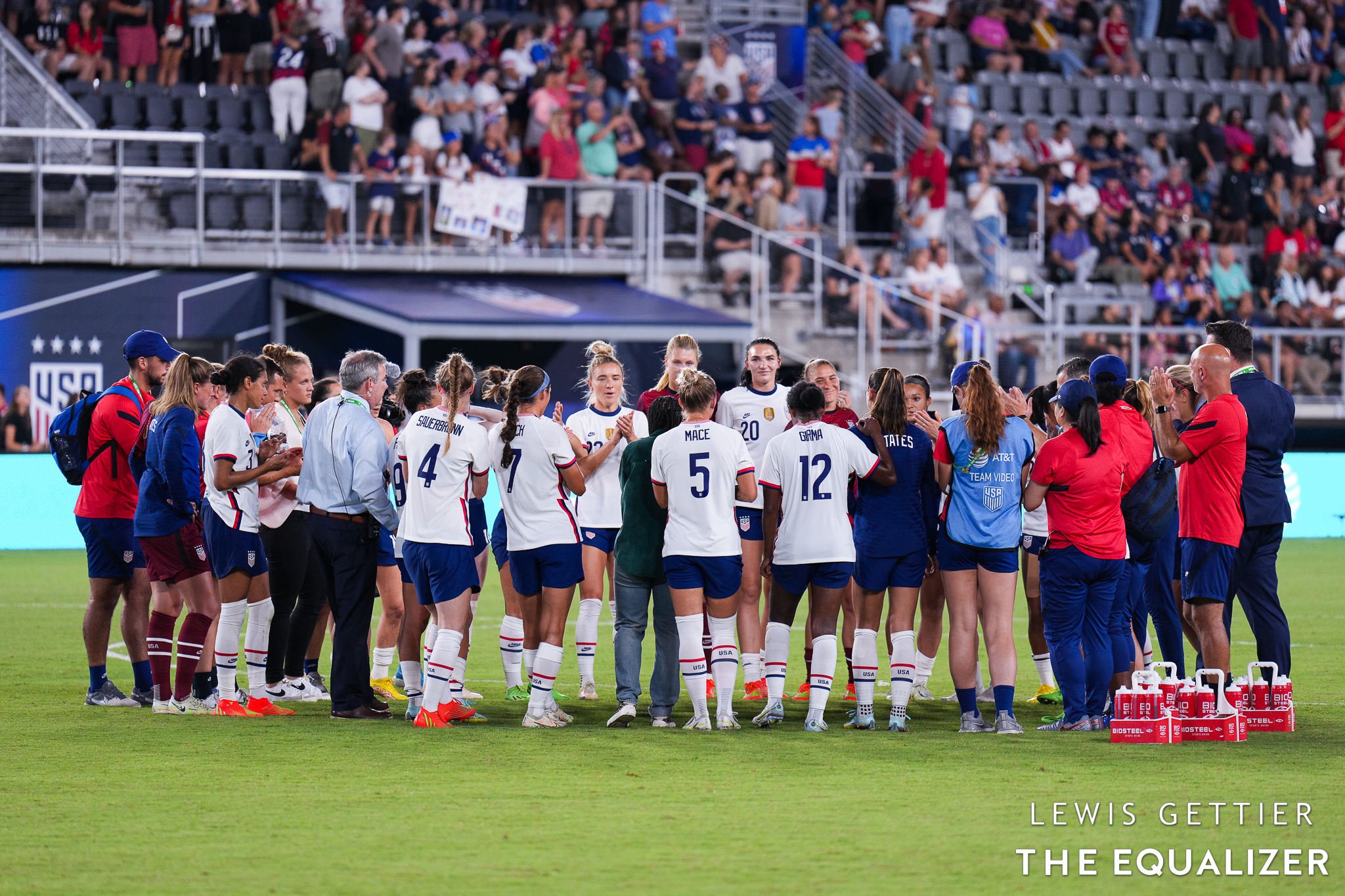 Transition was the operative word for the United States women’s national team in 2022. It is not an exhaustive description for one of the most challenging years in the illustrious program’s recent history, but it is the overarching theme.

A new generation of players was ushered into the picture to rather abruptly replace the old guard that had helped the U.S. win the two previous World Cups. A few veterans remain, but 2022 was about change.

Not all that change brought success. There were individuals who made clear cases to be at the 2023 World Cup and part of the program’s foreseeable future, and there was a collective struggle for all those new pieces to mesh. A continental triumph at the Concacaf W Championship clinched both World Cup and 2024 Olympics qualification, but it was sandwiched by an underwhelming SheBelieves Cup to start the year and a much more concerning three-game losing streak at the end of 2022.

The World Cup awaits in 2023. Much time will be spent looking ahead to that, but for now, let’s look back at the major talking points for the U.S. in 2022.

The changing of the guard

U.S. head coach Vlatko Andonovski laid out his plans to The Equalizer in late 2021: The veteran group, which had just settled for a bronze medal at the Tokyo Olympics, would not be called into camp at the start of 2022. New players would be evaluated and tested at the international level to get (at least some of) them ready for the 2023 World Cup.

Andonovski largely stuck with his new group throughout 2022, even through some difficult stretches of play and amid some controversy, none more so than when he declined to call in an in-form Christen Press prior to her tearing her ACL that same weekend in June.

Seventeen players have earned their first senior caps under Andonovski. Seven of those debuts occurred in 2022, most recently by 17-year-old forward Alyssa Thompson, whose appearance in a 2-1 loss at England in October made her the youngest player to debut for the U.S. since 2016.

Beyond debuts, 2022 was the year when previously inexperienced international players became central figures to the team, from forward Sophia Smith’s breakout to starting roles for defenders Alana Cook and Emily Fox and midfielder Andi Sullivan.

A false start to the Catarina Macario era

The focal point of the team’s generational change was and is Catarina Macario. That was made clear in the early months of 2022.

Macario played as a withdrawn No. 9 for the U.S. at the SheBelieves Cup and in a pair of friendlies against Uzbekistan. Andonovski praised Macario, who was 22 at the time, for her ability to dictate the game and bring other players into the game. The U.S. coach explicitly spoke about other players starting to figure out how to play with Macario and how beneficial those predictive relationships would be.

Then came the injury: Macario tore her ACL in the season finale for Lyon on June 1, a useless game that came after Lyon had already wrapped up the European and French titles. The start of the Macario era would have to wait.

Macario is expected back on the field in the spring. Assuming she is healthy enough in time for the World Cup, which starts in July, she’s a lock for a roster spot barring a horrible dip in form post-injury. The timing creates some uncertainty for Andonovski. Macario’s talent is undeniable, but reintegrating her into the lineup and making her the focal point with such little preparation time before the World Cup could be a gamble, especially with how well the front three of Smith, Mallory Pugh and Alex Morgan played in Macario’s absence.

Will Macario be the No. 9 or No. 10? And will she start? We’ll soon find out. In 2022, for the five games we got to see from her, she showed glimpses of why the U.S. is planning its next decade around her.

There were plenty of struggles for the U.S. this year, including at times during the Concacaf W Championship, but the fact remains: the Americans won the only competition of consequence in which they played in 2022.

A July 18 triumph over Canada — a 1-0 result behind a penalty-kick goal from Morgan — clinched the U.S. the region’s only automatic berth to the 2024 Olympics thanks to Concacaf’s new double-jeopardy setup. The U.S. had already clinched a spot at the 2023 World Cup by making the tournament’s semifinals.

There was more at stake in the Concacaf W final, of course. Bragging rights are overrated, and revenge is not the right word for a regional-tournament victory after Canada had defeated the U.S. at the Olympics en route to the gold medal less than a year prior.

What the U.S. needed from that match was a confidence-boosting result, a convincing showing to go with a positive result, to prove that everything was on track for World Cup preparations. The Americans briefly weathered pressure from Canada before largely dictating the flow of the game.

The victory did not erase some of the weaknesses exposed earlier in the tournament against Haiti, such as midfield disconnection and some uncertainties on the back line. Beating Canada did, however, allow the U.S. to celebrate the victory it came to the tournament for and to put together the complete performance many had been awaiting.

Many of the concerns about the U.S. that existed in the early part of the year came with caveats: The group was new and still learning to play with each other. The struggles against ostensibly inferior opponents were excusable given the squad’s lack of experience.

But as 2022 neared its end, and it became clear that Andonovski had identified the core group he will take to the World Cup, a three-game losing streak — which was precariously close to becoming the first four-game losing streak in the program’s history — brought to the fore so many questions about whether the group is ready to contend on the big stage.

A 2-1 loss to England at Wembley Stadium in October snapped a 13-game winning streak. The European champions completely outplayed the U.S. in the middle of the park, but the Americans managed to stay in the game and could have argued they deserved a draw if not for a questionable offside call on a would-be goal by Trinity Rodman. Even if that tally had stood, the game would have left questions.

Four days later, reality set in. The U.S. lost 2-0 to a second-choice, inexperienced Spain side in Pamplona, conceding on a free kick and a lost mark and looking listless along the way. It was one of the flattest U.S. performances in recent memory and a serious alarm bell for what was not working in midfield and defense.

Little changed in the November window, which began with a 2-1 loss to Germany. Even as the U.S. showed some mettle to fight for a late equalizer — a Megan Rapinoe tally assisted by Morgan, as if to suggest the veterans might save the day again — the U.S. conceded the winner four minutes later, in the 89th minute.

It looked like more of the same four days later when Jule Brand put Germany ahead in the 18th minute of their second meeting. Sophia Smith and Mallory Pugh then scored about 90 seconds apart early in the second half, and the U.S. held on for a moral victory, if nothing else.

Whether and how much the Americans learned from that relatively brutal, four-game stretch will likely go a long way in determining their success at the World Cup.

Injuries (and absences) pile up

Amid all the questions about personnel, lineups, optimal formations and individual form, there was a constant: injuries. Combined with some extended absences, they don’t fully explain or solve everything, but they do offer hypothetical solutions.

The U.S. could field a very talented starting lineup with players who were injured or otherwise absent from the team for large stretches of 2022.

Up top, Macario missed the back half of the year. Lynn Williams, one of Andonovski’s go-to wingers, missed most of the year with a hamstring injury. Press tore her ACL amid a strong stretch of form that should have (but ultimately did not) put her return to the team on the table.

Sam Mewis’ knee injury went from precautionary and minor to season-ending; she never suited up for the U.S. in 2022. Of all the absences, hers was among the most glaring given the midfield issues.

Defensively, the U.S. lost Tierna Davidson to a torn ACL early in the year. Abby Dahlkemper struggled through multiple injuries and subsequent dips in form, ending the season with back surgery. Kelley O’Hara and Emily Sonnett also ended the year injured.

Crystal Dunn, Julie Ertz and Casey Krueger missed most or all of the year due to pregnancy. Replacing Ertz in midfield remains an impossible task. She is a two-time World Cup champion with the bite that the U.S. really lacks. It’s unclear whether Ertz plans to return to play.

Focusing too much on who isn’t with the squad can quickly become counterproductive, but the rolling injury list in 2022 was too long to ignore. It leaves a whole lot of “what ifs” heading into the home stretch for the World Cup.

2022 NWSL Year in Review: A season of incredible performances
Catarina Macario the playmaker, not strictly the striker, will benefit the USWNT