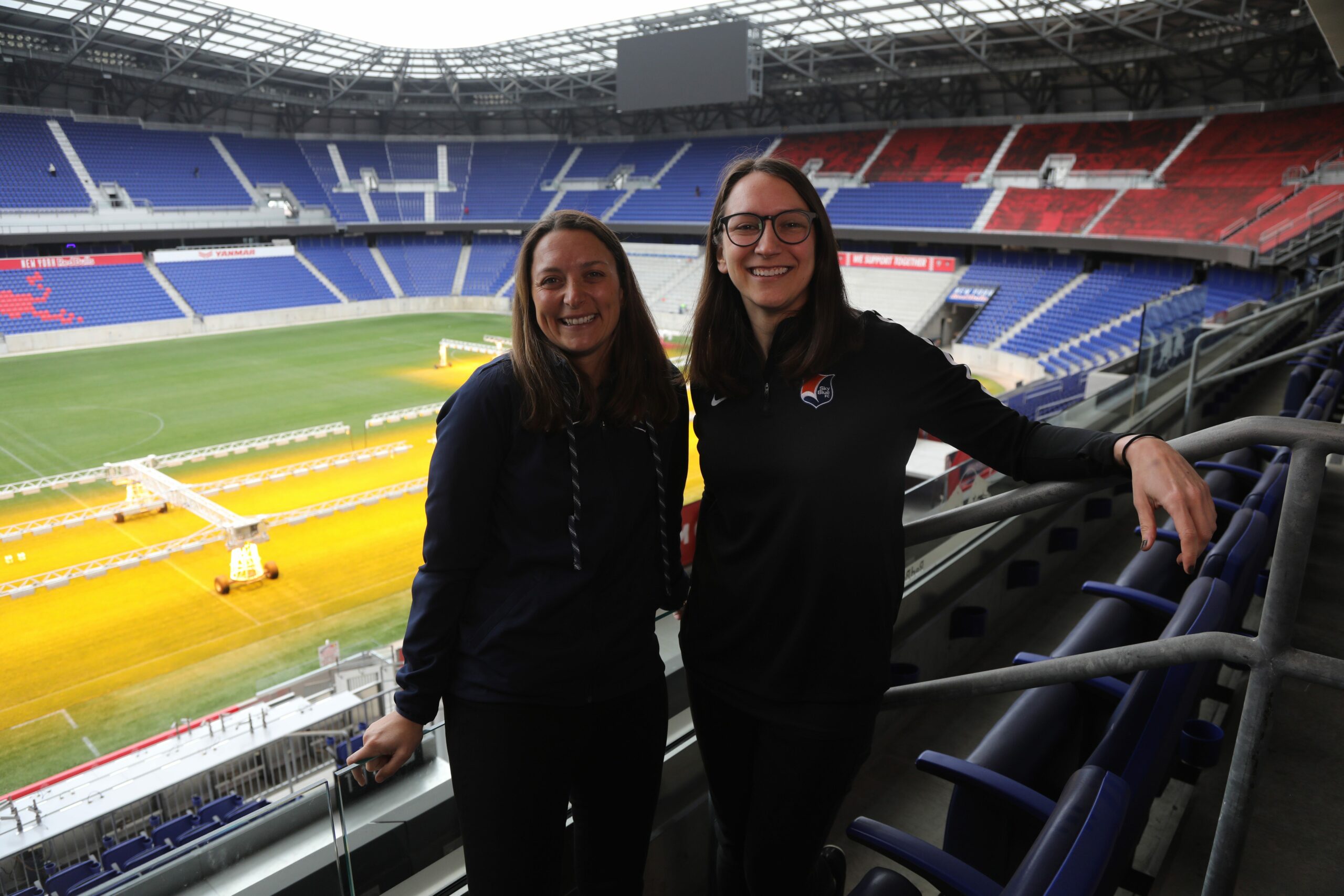 As Equalizer has reported, the highly-anticipated report contained detailed findings of an investigation into numerous allegations of misconduct across the league. The findings included information on what led to the firing of former Sky Blue/Gotham FC General Manager Alyse LaHue in July 2021.

At the time of LaHue’s firing, limited information was provided to the public. The club put out a statement via Twitter stating that LaHue had been let go following an investigation by the league. The Equalizer later reported that the investigation stemmed from a complaint filed with the league under its anti-harassment policy.

On the evening of the announcement of LaHue’s firing from Gotham, a statement was provided by Kelly Hoffman, attorney for Alyse LaHue via Meg Linehan of The Athletic on Twitter reading: “Ms. LaHue denies the allegations made against her and will make no further comment.”

No further information was made public until October 2022. In the investigation commissioned by U.S. Soccer and led by Sally Yates, the former U.S. attorney general, one small reference was made regarding LaHue, which read as follows:

Our investigation also uncovered examples of inappropriate conduct by club personnel. In June 2021, on behalf of a Gotham FC player, the Club’s Director of Operations submitted to the NWSL a complaint alleging that Gotham’s General Manager Alyse LaHue had harassed a player. A third-party investigator conducted an investigation, and on July 8, 2021, the League concluded that “Ms. LaHue’s behavior in connection with [the player] was improper and inappropriate, and a violation of league policies . . . .” Gotham subsequently terminated the GM’s employment.

Multiple players voiced concerns to the Joint Investigative Team regarding vague public statements that obscured the reason for departures, mainly for coaches. The report states that vague public statements contributed to the failure to adequately share information. Regarding Gotham’s announcement of LaHue’s termination, the report states that although the club did specify that she had violated “League policy,” it did not specify that she violated the League’s prohibition of harassment. However, there have historically been no established processes at the NWSL for sharing information about misconduct on any level.

When LaHue’s termination was announced in June 2021, an NWSL spokesperson put out a statement via Meg Linehan on Twitter stating: “Following a complaint, the league conducted an investigation and shared the findings of that investigation with Gotham FC. Those findings will remain confidential and the league will not comment further on individual club personnel matters.”

Now, further details have come to light. As the report summarizes, LaHue’s alleged misconduct included “sending the player inappropriate text messages that continued even after the player told LaHue to accept that they were ‘working together and nothing more.’ LaHue expressed an emotional reliance on the player, repeatedly questioned the player’s interactions with another individual, and pressed the player for more attention.”

The investigative team’s evidence included inappropriate and suggestive text messages along with accounts of unwanted attention, even following pushback from the player. The report indicates that others at Gotham perceived LaHue to give the unnamed player “preferential treatment” and that there had “always been a high interest and attention” by LaHue towards this player.

A spokesperson for Gotham FC provided Equalizer with the following statement regarding the handling of the complaint made against LaHue:

“NJ/NY Gotham FC ownership acted immediately upon learning of a confidential player complaint against former General Manager Alyse LaHue. Within one day of learning of the player’s complaint, the matter was escalated to the NWSL pursuant to league policy. Ms. LaHue was placed on unpaid administrative leave while the NWSL’s third-party investigator reviewed the matter. Gotham FC cooperated in all respects with the NWSL investigation.

On July 8, 2021, the Club was advised that the investigation determined that Ms. LaHue violated the league’s policy on harassment, discrimination, and retaliation. Ownership terminated Ms. LaHue’s employment on July 9 and stands by that decision.”

Additionally, the club put out a statement via Twitter addressing the report as a whole.

The Philadelphia Inquirer published a statement they received from LaHue’s lawyer, Kelly Hoffman following the release of the Joint Investigative Report on Wednesday. The statement reads in part, “Ms. LaHue is supportive of the ongoing reforms that are taking place in the NWSL. Accordingly, she cooperated in the first, second, and third investigations into alleged conduct from April 2020 reported in June 2021. Ms. LaHue has sat for approximately seventeen (17) hours of interviews and continually requested access to materials related to her case.”

According to the joint investigative report, LaHue participated in an initial interview but later canceled another scheduled interview through her counsel and declined repeated requests to reschedule. The report indicates that LaHue’s counsel described the allegations as “false claims.”

The report explains that the Joint Investigative Team found discrepancies in versions of an email exchange involving LaHue that was part of the file from the initial investigation done by the league in 2021. As The Philadelphia Inquirer reported, the statement from LaHue’s lawyer claimed that investigators “provided Ms. LaHue a few documents that contained alterations. Ms. LaHue immediately hired a top digital forensic company, which provided the JIT metadata and evidence of alterations in documents used against her.”

However, the joint investigative team indicated in the report that “based on the totality of the evidence,” misconduct did occur, notwithstanding these discrepancies, which are not described in any detail. No further mentions of LaHue are made in the report.

With the new details from the joint investigation along with the previous report released in October, it has become apparent that significant policy changes must be made to the league to ensure this behavior is discouraged and, if it does occur, reported and handled properly. Non-fraternization policies need to extend beyond just head coaches as demonstrated within the report with very critical language regarding relationships between players and staff. Misconduct on any level cannot be tolerated, and clear reporting lines along with proper vetting must be enshrined in NWSL policies.

The report makes a number of suggestions on guidelines that can create this stability moving forward for the league. In fact, for much of the NWSL’s existence, background checks on coaches and player-facing staff were not required. It was not until August 2021 that the league implemented a process requiring clubs to submit head coaching candidates to the league for vetting and approval. In September 2021, this requirement was updated to include assistant coaches and other club staff who would regularly interact with players. In November 2021, the league established an additional “temporary protocol” mandating all coaches, general managers, and president hires be approved by the league and complete a New Hire Certification, including background checks.

Although these measures are a significant improvement from prior years, the joint report noted significant gaps in the vetting protocols, including a lack of a “reputational check.” Such a check would require additional research including reference interviews from former players at the youth and professional levels as well as other contacts. The report states, “Multiple individuals emphasized the critical insight that can be gained by speaking with persons knowledgeable about the candidate.”

While it appears Gotham and the NWSL handled the complaint made regarding LaHue in a timely and appropriate manner once it was reported, there must be steps taken to prevent misconduct from occurring in the first place, and ensure that players feel comfortable reporting it if and when it does occur.

As the report states, there is a clear lack of guidance provided to players regarding what constitutes misconduct. With inconsistent anti-harassment policies between the league and various clubs and a lack of uniform training on how to identify and respond to inappropriate conduct, players lacked a clear structure in how to report.

According to the report, Gotham was one of two clubs in the league that even references the NWSL Anti-Harassment policy in their policies, stating that the club “will also adhere to the National Women’s Soccer League’s Anti-Harassment Policy.” However, Gotham’s own anti-harassment policy contained a provision stating that “employees who witness offensive behavior in the workplace – whether directed at them or another employee – are encouraged, though not required, to immediately address it with the employee whose behavior they found offensive.” The report states that this provision puts an unfair burden on employees experiencing misconduct by suggesting they should confront the employee engaging in the misconduct.

The Equalizer is teaming up with The Next

The Equalizer is partnering with The Next to bring more women’s sports stories to your inbox. Subscribers to The Equalizer now receive 50% off their subscription to The Next for 24/7 coverage of women’s basketball.

The report also indicated that Gotham was one of seven clubs where players indicated to the Joint Investigative Team that they were unaware of whether the club had HR personnel or otherwise did not know to whom they could report concerns at their club. A source familiar with the situation at Gotham explained to The Equalizer that in early 2022 the team brought in an HR consultant and has recently brought in an HR Executive as an additional resource for the team.

As for the players, there is a hope that with this report finally coming out, all eyes can turn toward the future of the league. McCall Zerboni, Gotham FC’s captain and NWSL Players Association representative in 2022, is ready to move towards a place where the mistakes from the past can be turned into creating a strong future for the NWSL, a young league that is still growing.

“Like any league or business in its infant stages, we learn from experience and mistakes. This trial and error process is what highlights need and in turn creates important policies and guidelines for stability in our infrastructure,” Zerboni told Equalizer. “Recently we have absolutely discovered and uncovered the areas [where the] NWSL lacked and the harm it has caused. We must make the necessary changes based on the unprofessionalism and carelessness in the past in order to pave [the way for] a more mature and harmless future.”

Zerboni is hopeful for the building process currently underway within the league, and looks forward to seeing positive improvements implemented at the league and club levels.

The recommendations set forth by the report were extensive, and can be found in the final pages of the report. With the details of LaHue’s termination from Gotham finally coming to light along with a multitude of other issues across the NWSL, the league and the players association make one thing clear: systemic failures in league policy made it possible for such behavior to occur, and the time for change is now.