Kassouf: NWSL for the fans, by the fans 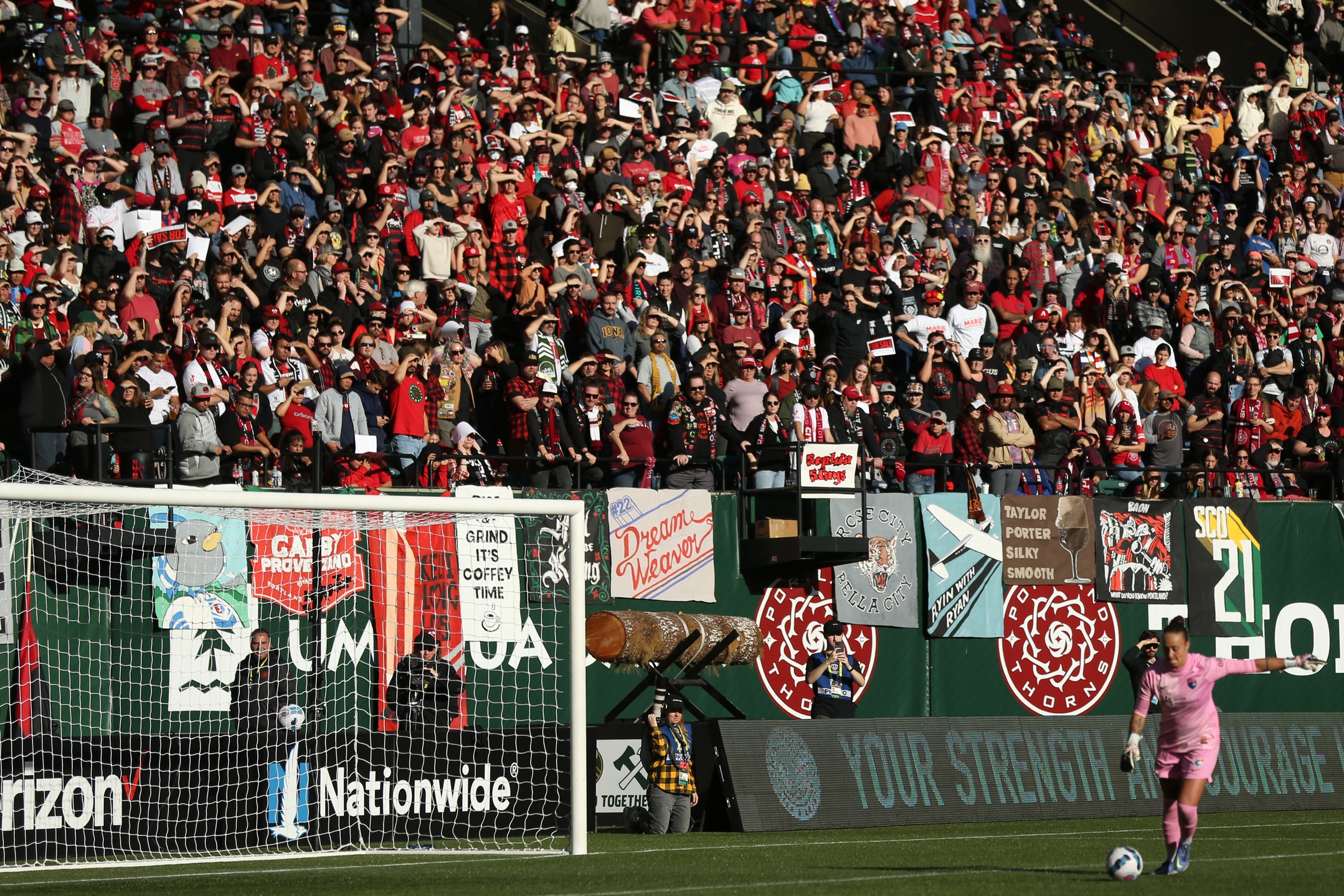 This column is for the fans.

Sunday was a day unlike one I’ve experienced in the National Women’s Soccer League. This entire playoff campaign so far has been unprecedented, from the record-setting crowds to the game-winning goals that keep coming in the last possible moments.

I’ve covered this league since it was just a twinkle in the eye of a few prospective investors in 2012 and, at times along the way, it was easy to lose hope of moments like these finally coming to fruition.

Crystal Dunn’s goal in second-half stoppage time on Sunday, to send the Portland Thorns to the 2022 NWSL Championship, will be burned into my brain for a long time.

Dunn alone is an incredible story: a superstar who is five months postpartum and returning to play, stepping into a high-stakes game in midfield and smashing a shot of her dreams. Her story is exceptional, but her goal does not tell an exhaustive tale.

The moment in Portland was also made special by the 22,035 fans in attendance. I’ve been to Providence Park several times, including for an NWSL Championship. I was not there in person on Sunday, but even from a few thousand miles away, I heard and felt every cathartic scream that erupted out of that crowd in a way I have not experienced before.

Maybe we had taken for granted that atmosphere in Portland. It was long the standard-bearer for a league desperate to add more well-supported — and appropriately funded — teams. But the last few weeks — the last 13 months — have been hard. Really hard. Especially for people in Portland.

The NWSL’s reckoning remains ongoing as more bad actors are exposed for their roles in enabling systemic abuse. Whereas in Chicago, an ownership change might be a necessary restart for a Red Stars franchise that has toiled in anonymity for too long, in Portland, it ostensibly threatened to tear down the NWSL’s golden franchise.

That would be short-sighted, however, and view the Portland Thorns through the lens of a business built in a vacuum by owner/operator Merritt Paulson. Over the past few weeks, we’ve been reminded of something we never should have forgotten: supporters are the pulse of the team, the reason Portland is, well… Portland. They were there for the Timbers before Paulson, and they will be there for both teams well after Paulson.

Everything about Dunn’s goal was amplified by the crowd. And despite all of Portland’s historical business success, there were no guarantees a few weeks ago that this crowd would show up in the way that it did. Thorns attendance this season remained relatively strong, but still well below the team’s pre-pandemic height of 20,000 fans per game. For the first time in NWSL history, the Thorns did not lead the league in attendance. They finished second to expansion side Angel City FC, some 3,000 fans per game their superior.

Numbers only tell part of that story. Supporters in Portland have since last year wrestled with whether to renew season tickets or continue attending games, having been armed with the knowledge that Thorns executives — including Paulson — played prominent roles in allowing former head coach Paul Riley to continue coaching in the NWSL after alleged sexual coercion of former players. Some fans, understandably, felt like they had to walk away for now, unsure of how they could financially separate player support from further funding ownership that they no longer trust.

These past few weeks, though, players have asked for fans to show up now more than ever. Thorns forward and NWSL MVP candidate Sophia Smith was the first to call for the support, saying that fan support is “one of the positive things we have left in Portland.” Other players followed, asking that fans back them as a sign that they, the players, are not in this trauma alone.

Last week, (in addition to another reported group interested in purchashing the Timbers and Thorns) a group of local supporters proposed the idea of making both the Thorns and MLS’ Timbers (who share ownership) supporter-owned teams. As of this writing, the group claims on its website to have over $7 million in pledges to purchase a stake in the club from Paulson.

A statement on the group’s website reads: “We believe that community ownership of our Timbers and Thorns is the best path to have our teams live up to our ideals. It will build a positive culture and give us all a sense of committed connection.”

The concept already exists in soccer in the United States, including for a women’s team. The Minnesota Aurora debuted in 2022 as an amateur team in the USL W-League, which plays a two-month season. A group of club founders helped raise over $1 million among 3,000 community owners, with the idea being that community members help hold each other accountable more than any millionaire or billionaire ever would. It is a model that offers hope for a better kind of club, one that goes against the grain of the “broken system of soccer” run by rich white men, as Wes Burdine, one of the founding owners said.

“We all know what NWSL, what women’s soccer went through this past year, and I think there is a real frustration at just feeling kind of hopeless,” Burdine told The Equalizer earlier this year. “You put your heart into this thing, and you support these teams or this sport and there’s this hopelessness that we can’t affect the systems of power that are creating all of these problems over and over again and not protecting people. I think that this project comes around at a time when it allows people to break from that cynicism.”

Minnesota outperformed several NWSL teams this year in average attendance, and the Aurora sold merchandise at a rate — and with a buzz — that some NWSL teams with larger budgets could only dream of. On Monday, the founders of Aurora announced that they “have begun conversations with investors as part of the next steps to move to a professional league.” The NWSL, as it contemplates expansion, would be wise to recognize what is happening in Minnesota.

There seems no better place in the U.S. for a community model than Portland, the self-proclaimed ‘Soccer City USA.’ Portland fans have made the Thorns what they are today. Players have navigated difficult questions about their employers for weeks now, questions that will not soon go away. And players have been clear about one thing: they need the fans. That, and they want their work to be celebrated.

How could the excitement of these playoff games not be celebrated? From Dunn’s game-winner, to Kate Del Fava’s game-winning goal in the 10th minute of second-half stoppage time in the opening round (the latest regulation goal in NWSL history), to Alex Morgan’s 110th-minute game-winner last week, the NWSL continues to produce the kind of entertainment that other global leagues could only dream about.

This entire NWSL playoff campaign is a reminder that without fans, there is no league. The same can be said for players — quite obviously the workers who make the league an actual product — and, indeed, owners, but the tide has shifted on that last group. Even a few years ago, the league lacked enough outside business interest to see ownership turnover. Or, perhaps, the new surge in investment interest is further confirmation that the league just lacked vision. Now, there are literally dozens of prospective ownership groups who have signed non-disclosure agreements in the expansion bidding process.

With options come ideas. A supporter-owned team faces untenable red tape as the rules currently stand, including a rewriting of U.S. Soccer’s professional league standards, which require certain, high-threshold minimums in various categories. For a top-flight women’s league, which the NWSL is, that means each team having a principal owner (35% or more) with a net worth of at least $15 million. A way around that might be a prominent, wealthy member of the community investors taking on the principal role, although that feels more like a half-step forward.

All that speaks to financial ownership. These playoffs, from Houston to San Diego, Seattle to Portland and even the fans watching from the Power and Light District in Kansas City, remind us that teams and leagues ultimately — in the long-term — belong to the fans.