NWSL semifinal primer: What’s on the line for each team 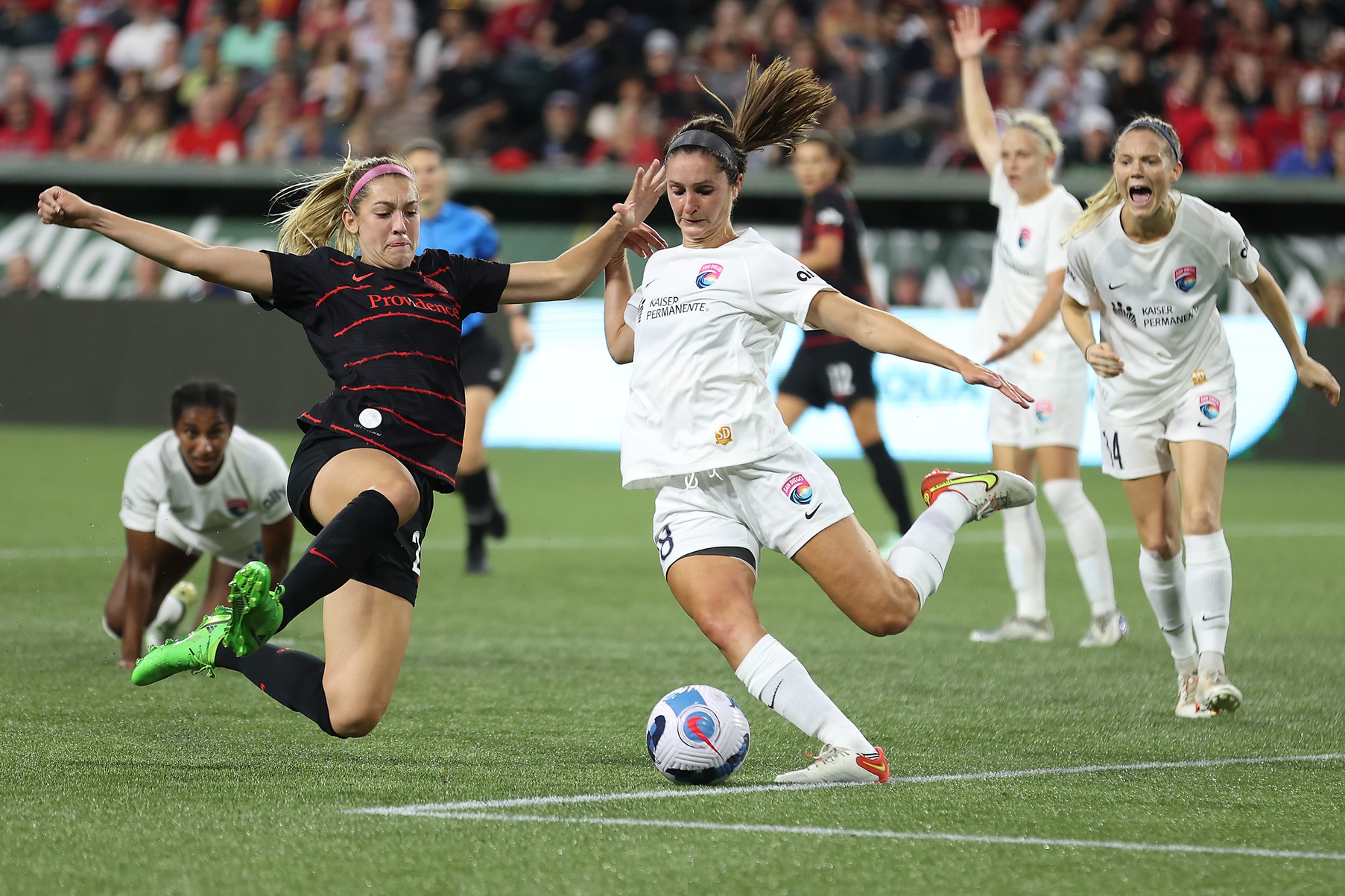 For the second year in a row, the Pacific Northwest will house both National Women’s Soccer League semifinals.

A year ago, visions of the blood rivals meeting in the NWSL Championship were dashed when the Washington Spirit rallied to defeat OL Reign and the Chicago Red Stars bunkered-and-countered their way past the Portland Thorns. This yea.r two new shooters stand in the way of that Portland-Seattle final (which will be played in Washington, D.C.). The expansion side San Diego Wave FC will be in Portland while the Kansas City Current head to Seattle to grapple with the Shield-winning Reign.

Here’s a look at each team heading into the weekend, including what’s on the line (besides the obvious) and who might make the difference.

Pressure – moderate to high:  This is the Reign’s third Shield and the first two ended with losses in the NWSL Championship to FC Kansas City. This time, they get a shot at the latest iteration of the NWSL in Kansas City, the Current.

On one hand, only two of the previous eight Shield winners won the title, and a season with a trophy is rarely an unsuccessful season. On the other, running down the Thorns for the Shield was a major blow in the Cascadia rivalry and it would be a massive letdown to cede the big trophy to their I-5 rivals. Megan Rapinoe, one of three players (Lauren Barnes, Jess Fishlock) remaining from the 2014-2015 Shield teams, said after the season that they remember those losses and that an NWSL Championship remains the ultimate goal.

The X-Factor – Rose Lavelle:  The oft-injured Lavelle has enjoyed her most durable season and scored three goals in four games at the start of the seven-game unbeaten run that Reign finished the season on. Her speed and off-ball movement has the potential to neutralize Kansas City holding midfielder Desiree Scott and pull apart the Current defense.

We need to be talking about – Phallon Tullis-Joyce: The Reign entered 2020 with exactly 1 minute of NWSL experience among the goalkeeping corps. Tullis-Joyce, who made 41 appearances in France for Reims, put a stranglehold on the position this season. The Long Island native played every minute of the Challenge Cup and regular season and was named a finalist for Goalkeeper of the Year. A position that was a major question mark in Seattle during preseason is now considered a strength heading into the playoffs.

Pressure – high:  The last time we saw the Thorns they were kicking away a 3-1 lead at Gotham that would have sewn up the Shield. Later that night, they watched their northern rivals take down the trophy in one of the more stinging developments in the 10-year history between the clubs. Throw in last year’s frustrating playoff loss to the Red Stars, in which the Thorns dominated just about every statistical category in a 2-0 loss, and Portland should be feeling the pressure to get back to and win the NWSL Championship.

The X-Factor – Morgan Weaver:  We all know about the brilliant season Sophia Smith had and how stingy the Thorns can be defending when they’re on their game. But they seem to be truly at their best when Weaver gets involved and on the scoresheet. Ever since she netted the goal to spring the upset on the Courage at the 2020 Challenge Cup, Weaver has proven she can live up to the moment. If she contributes on Sunday, it’s hard to see the Thorns not prevailing.

We need to be talking about – Bella Bixby: Bixby did not have a strong playoff game in 2021 and was visibly distraught afterwards. We then learned that she had lost her father earlier in the week. Now, she has a chance to stand tall behind a very good back line and backstop the Thorns to the title match. Despite nine shutouts and a 1.00 goals against, Bixby has been slightly more error prone in 2022 but the slate is clean ahead of Sunday’s kickoff.

Pressure – simmering:  It would seem logical for a first-year expansion side not to feel any pressure having already hosted and won a playoff game, but the fact is it is sometimes hard to think of this club as one that didn’t even exist in any tangible form at this time last year. If the Wave’s season ends in Portland, it will certainly be remembered as a positive one. Yet, the Wave spent a good portion of the season atop the table and played the Thorns tough enough during the year that it is not unreasonable to throw some expectations on them. Even Thorns captain Christine Sinclair admitted this week her side has struggled against the Wave.

The X-Factor – Taylor Kornieck:  Kailen Sheridan keeps things tight in back and Alex Morgan took down the Golden Boot, but it was Kornieck in the middle of the park who helped Casey Stoney’s direct style click for the Wave. If Kornieck can bridge the gap between back to front on Sunday, that could spell the difference. Honorable mention here to Sofia Jakobsson, who has put a slow start to the season behind her and was sensational against the Red Stars last weekend.

We need to be talking about – the Wave’s young players: The Wave surprised many when they used the No. 1 pick on Naomi Girma instead of Jaelin Howell. All Girma did was play every regular-season minute besides those that conflicted with her U.S. callups, and she could end up as both Rookie of the Year and Defender of the Year. Belle Briede was selected No. 27 and was on for all 120 minutes of last week’s playoff win. Marleen Schimmer (No. 9) also contributed this season. The Wave also grabbed 2021 picks Kelsey Turnbow and Amirah Ali from the Red Stars and Thorns, respectively, and integrated them into their system and culture.

Pressure – low:  The expression “nothing to lose” is badly misplaced around sports, but the Current are about as close to that as you can get heading into a semifinal. When they started the regular season 0-4-1 it made them 3-18-8 since 2021. Then, they suddenly turned it around by going 9-0-4 over their next 13. A side that did not win away from home last season not only got into the playoffs but won away to Houston with the latest regulation goal in league history, in the 100th minute. Don’t tell the players the pressure is so low, because they all want to win, but it’s hard not to look at the 2022 Current as a major success story regardless of how Sunday turns out.

The X-Factor – Lo’eau LaBonta:  LaBonta started in the NWSL at Sky Blue FC (now Gotham FC) but was waived early in 2015 before joining an FC Kansas City retooling in 2016 after they won titles the two previous seasons. She toiled there for two years and then went to Utah for two and back to Kansas City, all while making subtle improvements to her game and fighting off injuries. In 2022, she emerged as the midfield engine for the Current and her cool head from the penalty spot (5-for-6 and also made one in the playoff game) was a major influence on the club all season. The Reign will be looking to slow her down.

We need to be talking about – Desiree Scott: An NWSL original, Scott was at FC Kansas City before the title years but left for Notts County and did not get soaked in championship glory, coming back one year too late. She played in the first playoff game in league history, a crushing, 3-2 loss (after leading 2-0) to the Thorns in extra time. Last weekend would have been her first postseason match since but for being sent off in the last regular-season game. Scott gave an impassioned talk to the team after they pulled the match out in the 10th minute of second-half stoppage time and now will finally get her a return to playoff soccer.

Jordyn Huitema is just getting started
NWSL semifinals tale of the tape: Thorns-Wave, Reign-Current, and what previous meetings tell us