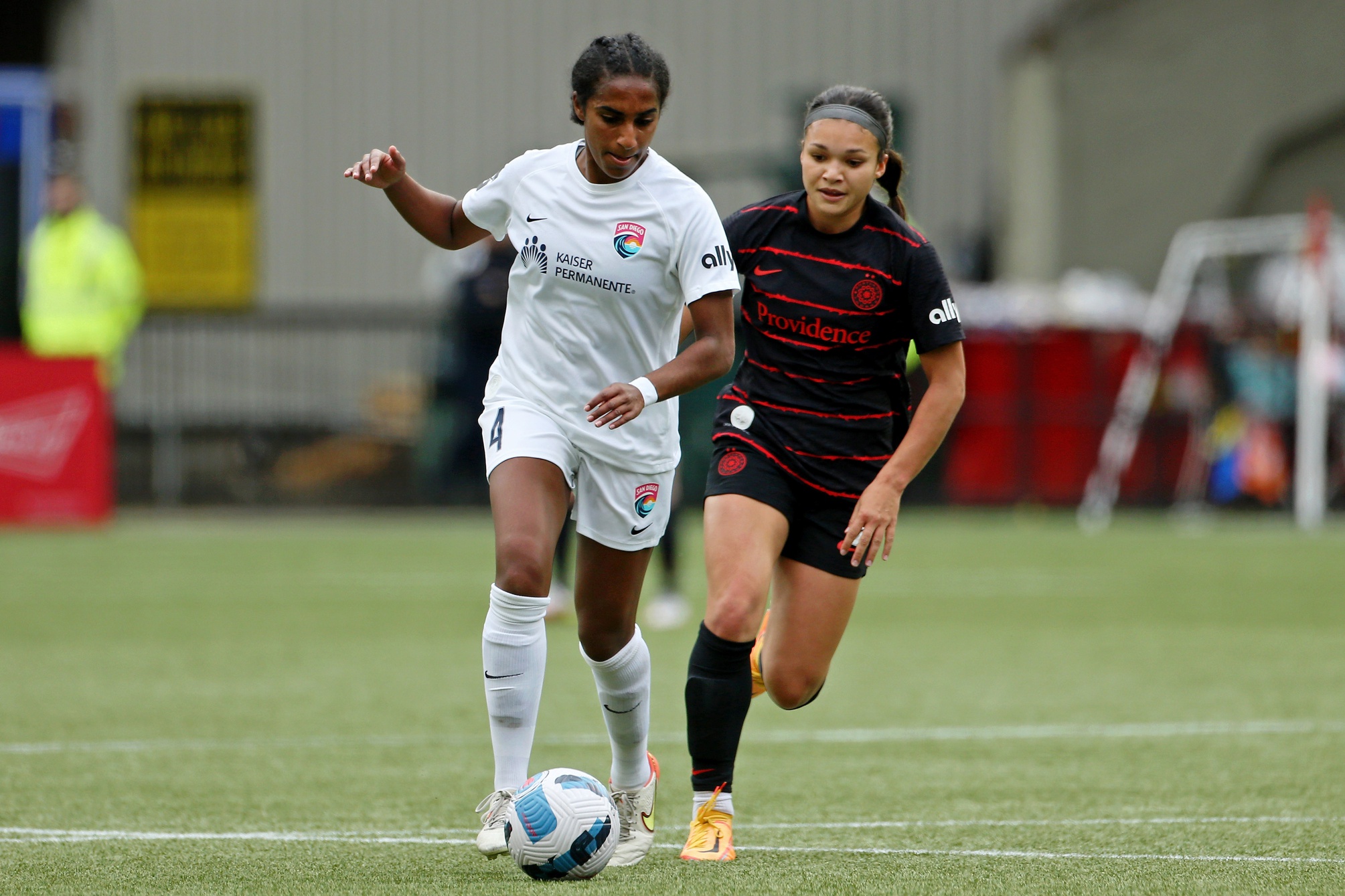 With our NWSL Best Players of 2022 series concluded, now it’s time to announce our Best XI.

Before we get to that, a quick breakdown of our Best Player rankings, showing representation by club and by national team.

The only clubs not represented this year were Washington Spirit and NJ/NY Gotham FC, who both endured disappointing campaigns.

And here are our comments on all 11 players to make the Best XI this year:

Since moving from Gotham to San Diego, Sheridan has had a little less goalkeeping to do, but that hasn’t prevented her from standing out. Her reactions have been on point, leading to multiple jaw-dropping saves beneath a more proactive defensive line. Incredibly, she’s stopped three penalty kicks – half of the total she faced in the regular season.

On top of those critical moments, the 27-year-old’s distribution has been fundamental to San Diego’s style of play, her willingness to receive well off her line and long-range passing initiating attacks. The team’s head coach, Casey Stoney, described Sheridan as “the best goalkeeper in the world.” After yet another exceptional campaign, it’s a viewpoint many outside of the Wave may agree with.

If ever there were doubts, this year they have been vanquished: Huerta is officially a fullback. And she’s one of the best around, too. Operating on the right side of OL Reign’s back four, she has arguably been the team’s most important player. The Reign places a lot of emphasis on balls into the box, and few in the world can supply them with the quality and variety of Huerta.

The 29-year-old has four assists to her name this season, and according to Wyscout created more scoring opportunities than anyone else in the NWSL. Formerly an attacking midfielder or winger, her early cross is among the most dangerous weapons in the league right now.

Ball came into her own at the heart of the Kansas City defense in 2022. After the team’s move to a back three, the 26-year-old shone in the center during the Current’s astonishing 13-game unbeaten run. Proactive and well-positioned, she intercepted opposition attacks, covered her teammates diligently, and denied strikers in 1-v-1s. A true competitor, this has been her best season of professional soccer, and she was recognized with a place in August’s NWSL team of the month.

In a season full of eye-catching rookie players, Girma has fit right in. Selected by San Diego as the first pick in 2022’s NWSL draft, the 22-year-old took no time at all to assert herself upon the professional game. Combining speed with a secure reading of play, she is already one of the league’s finest 1-v-1 defenders.

Girma’s ability to carry the ball forward and pass accurately off either foot also makes her a key driver of San Diego’s possession game. She made the NWSL team of the month three times and nailed down a place in the U.S. national team squad. If that form continues, she may well start at next year’s World Cup.

Pickett followed up a strong debut year at the North Carolina Courage with an even better second campaign. During regular-season play, she led the NWSL in assists, alongside Mallory Pugh on six.

Pickett also made the league team of the month three times; the only other player recognised so consistently was Naomi Girma, the top center back on our list. On top of that, Pickett made her U.S. national team debut, and forced her way into the conversation around the selection for next year’s World Cup. Dynamic and a competitive defender, she is also the best left-footed crosser in the league today.

Coffey settled instantly to professional soccer, enjoying a stunning first season in the NWSL. Naturally more at home in a more attacking role, she adapted seamlessly to the holding midfield position in Portland, displaying a maturity beyond her 23 years. Constantly available to the center-backs, always looking for the ball, keeping possession ticking, and with a fine range of passing, three months separated her Thorns debut and her first national team call-up.

On paper, it was going to be difficult for anyone to succeed Angela Salem as Portland’s midfield orchestrator, but Coffey did just that and made the process appear simple. Salem was an NWSL Most Valuable Player nominee in 2021, and US head coach Vlatko Andonovski believes Coffey should be one this year. It’s hard for anyone following the league in 2022 to disagree with that sentiment.

With 12 goals and four assists, 2022 was another banner year for Debinha. She played in just about every attacking role possible, but always found a way to impact the game.

Combining her change of pace, clever runs and tight control with unique flair, she set up and scored goals in ways only she could, while her partnership with fellow Brazil international Kerolin produced some of the best combination play seen in the NWSL. After her hat trick against Gotham in September, North Carolina coach Sean Nahas said that he wasn’t sure there was a better player in the world right now.

LaBonta has been the driving force behind Kansas City’s season, propelling the team forward with her runs from midfield and non-stop desire to close opponents down. Her clinical finishing from the penalty spot has produced five goals, and she has two more from open play, one of which was a stunning strike from outside the box in a rampant home win over the Washington Spirit.

The 29-year-old’s goal celebrations have encapsulated the team spirit underlying the Current’s success. When she hasn’t been scoring and celebrating, she’s been setting up others; only four players in the league have assisted more than her. Attack-minded and in perpetual motion, LaBonta has been at her most impactful in 2022.

There were times in 2022 when it felt like Pugh could do just about anything on a soccer field. Only three players scored more goals than her 11 in the NWSL regular season, and nobody set up more than her six. She was the most productive attacking player in the league, and one of the most entertaining to watch. The numbers alone don’t do her justice; some of her solo goals were sublime.

The 24-year-old has always been one of the most devastating dribblers in the game. Now, she matches that with a consistent end product. It was fitting that she scored the opener in Chicago’s win over Angel City to seal a playoff place, given how many times before she had single-handedly transformed steady possession into effective offense. Crucial for her club, this was the year she also became virtually irreplaceable to the United States national team.

Smith led the way in the NWSL for non-penalty goals this year, joining Debinha on 11. Including penalty kicks, she found the net 14 times, and set up a further three for her teammates. Her 1.06 goals-plus-assists per 90 minutes was by far the most of any Portland player. Now a regular for the U.S. national team at just 22 years old, Smith is growing into one of the finest strikers in world soccer. She’s able to create her own opportunities off the dribble — nobody dribbled more in the league this year — and score from surprising angles. “With Soph, you just let her play on instinct,” said Thorns head coach Rhian Wilkinson.

Morgan enjoyed her best club campaign to date in 2022, scoring 15 goals in 17 regular-season appearances. With two assists also to her name, she was directly involved in 53 percent of San Diego’s goal total. Five of Morgan’s goals came from the penalty spot, but that takes nothing away from their importance. The Wave were well-organized by head coach Casey Stoney, but without their star striker they would have had a much tougher time making the playoffs.

Not only did the 33-year-old score for fun, but she led the press, offered a threat in behind and linked play effectively, prompting Stoney to say that “we are very lucky she’s on our roster.” This level of performance paved the way for Morgan to reassert herself with the national team, and on current form she’s all but certain to play a key role at next year’s World Cup.