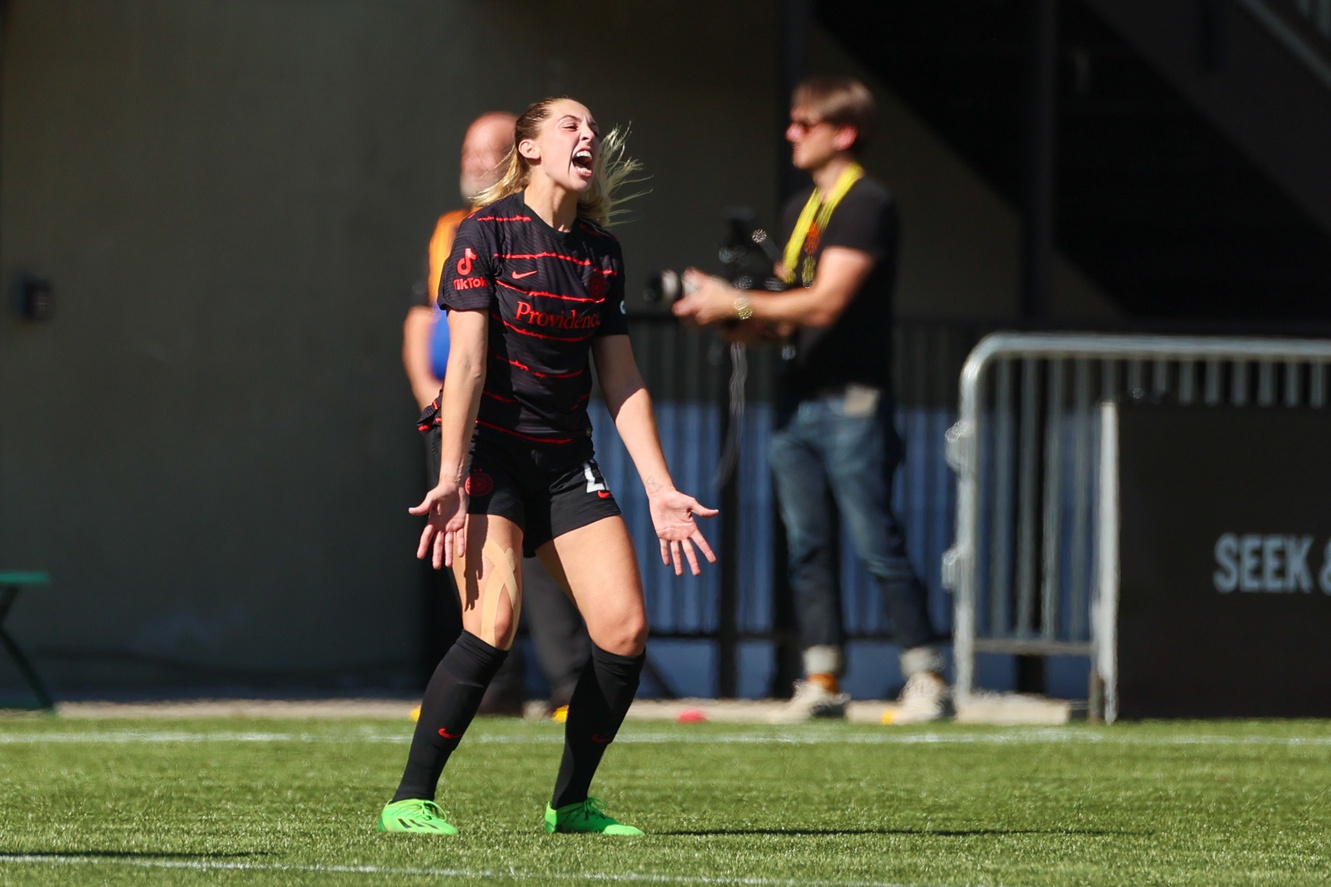 There is one week to go in the National Women’s Soccer League regular season and there is much to play for. The playoff picture began to sort itself out over the penultimate weekend but not much is settled heading into the final match day for all 12 clubs. Let’s take a look at how things stand.

One note: For practicality purposes I am going to ignore scenarios that are only possible if a team overcomes a goal difference deficit of 10 or more. If any of them happen, I will likely write a different column next week and will look forward to everyone berating me for the oversight. But alas, here’s the rundown of truly realistic situations.

The Thorns blitzed the Red Stars on Sunday to put themselves in reach of the Shield. A win this weekend at Gotham would wrap it up, as would draws or losses by both OL Reign and the Current.  If the Thorns play to a draw, then only a Reign win would keep Portland from a second straight top-of-table finish.

A Thorns draw will also secure passage to the semifinals (and the possible issue of having two weeks off with a dark weekend right after the regular season ends) as will a loss or draw by the Current OR a loss by the Reign. The worst the Thorns can do is finish third, which means there will be NWSL playoff soccer at Providence Park for the fifth time since 2016. That was the year the Thorns won their first Shield, and they wrapped it up with an away win at Sky Blue, who are now Gotham.

The Reign will finish the regular season Saturday night hosting the Orlando Pride, but exactly what impact the match will have won’t be known until two hours before kickoff. The Thorns are at Gotham earlier in the day and if they win, the Reign’s hopes for a Shield will be extinguished. But if Gotham can sneak a surprise result, the Reign will claim the Shield with a win.

All of this means that no matter what happens, the Reign will be hosting a playoff game for the fourth different season as they continue their pursuit of an elusive NWSL Championship. A Shield would be their third after they went back-to-back in 2014 and 2015.

First a tip of the cap to Matt Potter, Huw Williams, and the entire organization on reaching the playoffs, which became official when they drubbed the Washington Spirit in front of 9,593 at Children’s Mercy Park on Sunday. The Current won three games total in 2021 and started this season 0-4-1 (after a strong Challenge Cup). They are 10-1-5 since, and they did it all without Samantha Mewis and Lynn Williams, their two major offseason additions.

The next step will be trying to get a playoff game at home, and it’s in their hands. All they need is a draw at Louisville on Saturday. But the only way for the Current not to play at home in the playoffs is to lose and have the Dash win and the Wave at least draw.

There is also the pie-in-the-sky scenario for the weekend which is a Current win combined with a Thorns loss and Reign loss or draw, and the Current will win the Shield. There are bigger goals at hand in Kansas City, but 2022 has to be considered a success no matter what happens in October.

The Wave will kick off the weekend hosting the Courage on Friday night. The Wave are already in the playoffs and are officially the best regular-season expansion side in NWSL history. Now, they have a chance to play their first postseason game at home. A win will do the trick, as will a draw as long as the Dash don’t win by five goals. Even if they lose, only a Dash win will spoil the San Diego playoff party.

On the flip side, if the Wave win, they can backdoor a bye to the semifinals if the Reign and Current then both lose or draw over the weekend.

Like the Current, 2022 already has to be considered a successful season for the Wave, and their second-half rally to snag a point in Orlando and put them in the playoffs will be one of the enduring achievements if their expansion season.

Things are looking pretty good for the Dash, but a 1-2-2 stretch means the playoff spot that has been so elusive will have to wait one more weekend. So, how do they get there? And what are the stumbling blocks?

From there, if the Red Stars win, it will bring the teams level on points and things will get interesting. The first tiebreaker is goal difference, which the Dash lead by +3 over the Red Stars. If that winds up even, total wins will be a wash and next up in the tiebreaker list is total goals, which the Dash currently lead by +1. If none of those metrics can split them, the Dash will get the spot by virtue of having swept the season series from the Red Stars.

On the other end, the Dash can still host a first-round playoff game if they win, and the Current OR Wave lose. They can also catch the Wave with a win by four or more goals and a Wave draw.

A week after it looked like the Courage threw away their path to the playoffs, they rocked the Pride and Gotham for a six-point week and then watched the Red Stars and Angel City fall by the wayside. There is still work to be done, but for most of the season, it sure didn’t seem like the Courage would hit the final week in control of their playoff lives. And if they beat the Wave Friday night, it’s mission accomplished. If they don’t, they’ll be holding their collective breaths until Sunday.

The Red Stars have not sat out the playoffs since 2014, and for the first time since then it is out of their hands after a disastrous 3-0 loss in Portland. They’ll be watching the Courage result on Friday and hoping for a loss or draw, which will set up the Red Stars for a win-and-in game at home to Angel City on Sunday. They can also get in with a win and a Dash loss on Saturday, the details of which are covered above.

Not only did the Red Stars lose in Portland, they finished with nine players and Bianca St-Georges and Zoe Morse were sent off. That means neither will be available against Angel City.

The Red Stars have contested, and lost, finals each of the last three years so missing the playoffs would be a bit of a crusher. They have locked up a .500 record which they have done every NWSL regular season.

Angel City sold out Banc of California Stadium on Sunday and even took an early lead against Racing Louisville. But in the end, Racing ran right by them for a 3-1 win which has to go down as the most disappointing single result of this NWSL season. It leaves them needing the Courage to lose Friday night, which will set them up with a chance to get into the playoffs if they can beat the Red Stars on Sunday.

As more around the NWSL clamor for all matches in the final weekend to kick at the same time, this standalone Sunday match could still be a winner-take-all for the playoffs finale. But if the Courage (and Dash) don’t cooperate, expect the calls to get louder.

The queens of the two-goal swing did it again over the weekend, giving up two late ones to San Diego and allowing the Wave to clinch a playoff berth. The Reign represent a challenging final opponent and depending on earlier results, the Pride could spoil a few things for the playoff-bound Reign.

Is Racing finally turning a corner or are they just picking up some random, end-of-season results? Dealing Angel City’s playoff hopes a blow over the weekend probably doesn’t make up for what was a mostly miserable season, but it has to feel good nonetheless. Now, they’ll try to send their home fans home for the offseason happy against the Current. The club also learned that Nadia Nadim has another torn ACL and will miss most if not all of the 2023 season.

The Albertin Montoya momentum has stalled with consecutive losses, including a lopsided loss in Kansas City over the weekend. This remains a talented roster and it will be interesting to see what tweaks the new regime makes to try and return to title contention in 2023.

The disaster that is the Gotham season continued last week with losses to the Reign and Courage. They now own the longest losing streak in NWSL history, 12, and their 17 losses tie a league record they already held (shared with the Spirit). Can they sneak a result against the Thorns and possibly spoil the Shield party? Can they even score a goal, something they did not manage to do in five September matches? However it goes, Gotham are on the clock with the No. 1 pick for 2023.