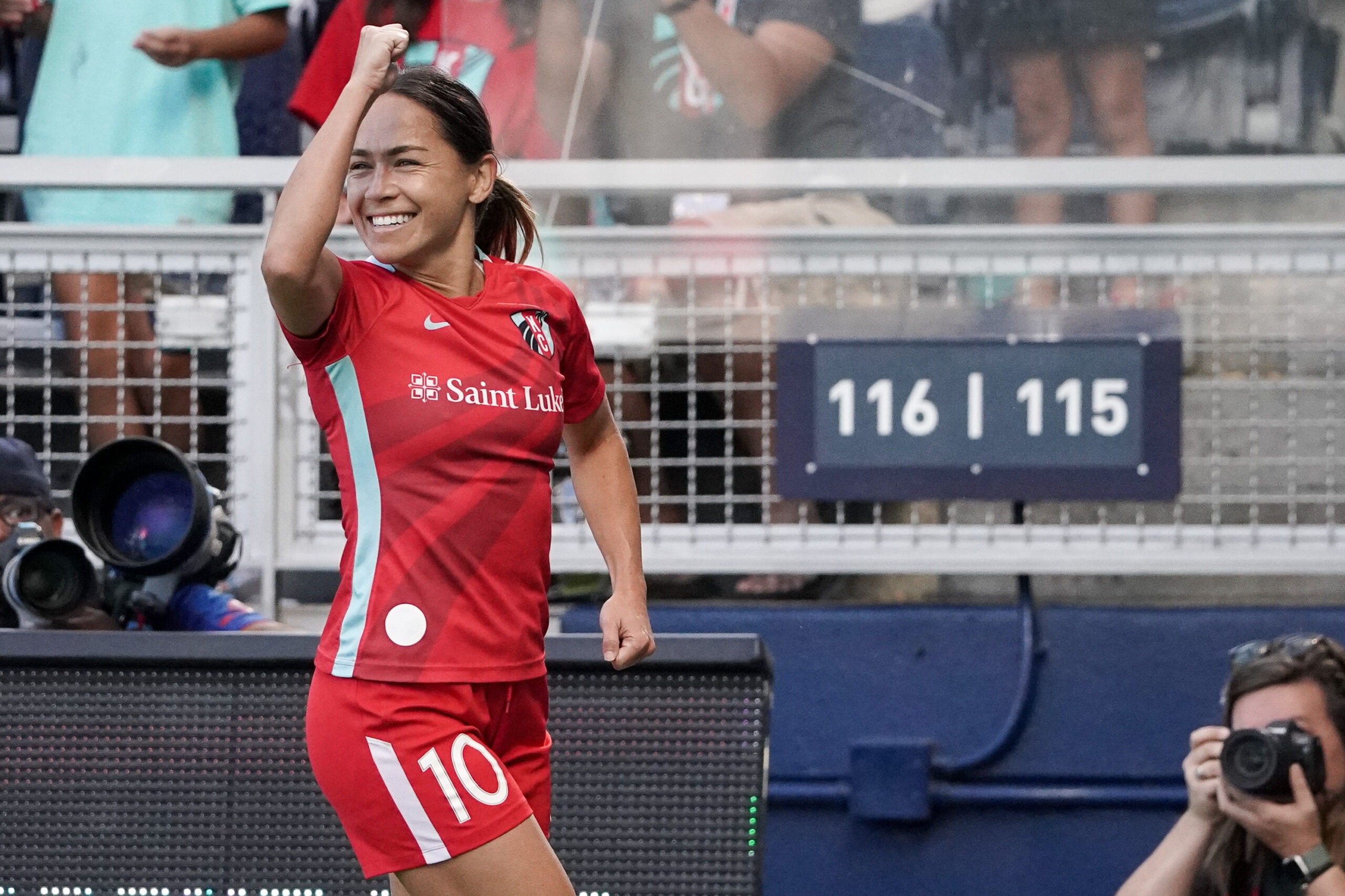 The Skinny: What started as an even-handed match between the Portland Thorns and Chicago Red Stars devolved towards the end, as Chicago suffered from red cards and struggled with missed opportunities in a game with huge implications for their potential playoff spot.

One Key Moment: After a goalless first half, Portland’s Morgan Weaver opened the scoring with a goal in the 48th minute. A 1-0 score would have been manageable for Chicago if not for Bianca St. Georges, who, minutes later, flashed two middle fingers at the referee, earning both a red card and a suspension for the next game. Portland went on to take advantage of Chicago’s reduced size (which went down to nine after Zoe Morse got booked in the 91st) and scored twice more to solidify their win.

But to put it simply, on Sunday, the Chicago Red Stars needed a win. A win for the Portland Thorns would be nice, too, but they already clinched their spot on Wednesday, September 21st against Racing Louisville.

For the first half of the match, a win for Chicago was still viable, and the game remained scoreless by the half, with the Red Stars holding slightly more possession. But the second half turned into both a storm of goals from the Thorns and a chaotic unraveling for the Red Stars, two series of events that seemed to catalyze one another. As Portland’s Morgan Weaver scored one goal in the 48th and another in the 61st, Chicago’s Bianca St. Georges and Zoe Morse both earned red cards, leaving the team to finish with just nine on the field as Taylor Porter scored Portland’s third and final goal in stoppage time. A loss of this size was exactly what Chicago did not need, and their hopes of making it to their eighth straight playoff rest on both their ability to beat Angel City on Sunday, October 2nd and the San Diego Wave’s capacity to beat the North Carolina Courage on September 30th as well.

The Skinny: With three goals in the first half of the match, the Kansas City Current cruised to a dominant victory over the Washington Spirit on Sunday evening, earning their first ever playoff berth in the process.

One Key Moment: It was neither the first nor second goal from Kansas City, but the third, that truly secured their dominance in Sunday night’s game. A shot deflected into the Spirit’s goal by Claire Lavogez, just three minutes after her teammate CeCe Kizer scored, proved just how dangerous the Current could be, and though their third goal was their final of the evening, it was more than enough to clinch their playoff spot.

Inside the Game: The Current and the Spirit faced off in the second NWSL game of Sunday night, which also included major playoff implications. Kansas City, who finished in last place in the league in 2021, completely transformed in 2022, and a win on Sunday would send them to the playoffs and continue what has been one of the best season-to-season turnarounds in NWSL history.

And the Current did exactly what they needed to do. The victory was theirs from the start, and three first-half goals by three different players – Lo’eau LaBonta, Kizer, and Lavogez – showcased the skill and strength of the Current’s roster. At halftime, it was clear that unless the Spirit figured out something new, the Current would coast to victory.

The game’s speed picked up in the second half, but the Current still maintained relative dominance of the game despite a few chances from the Spirit – Trinity Rodman in particular. When defender Addisyn Merrick came on for goal-scorer Lavogez in the 79th minute, the Current sent a subtle message that they were shoring up their defense, likely in response to increased second-half aggression from the Spirit. The Spirit, however, never managed to create real danger, and the Current both secured a win and became the third team in the league to secure a playoff spot.

The Skinny: San Diego came back late from a deficit to finish with a 2-2 draw, which was all they needed to secure their playoff spot. After Sunday night’s victory against the Pride, the Wave also became the first expansion team in NWSL history to qualify for the playoffs in its inaugural season.

One Key Moment: When San Diego first got on the board in the 76th, they proved that they still had a rally left in them after a relatively lackluster performance for the first 75 minutes. But it was Taylor Kornieck’s goal in the 87th minute that both secured the win and the playoff spot for the Wave, and gave the team an injection of confidence that they can carry with them to the postseason.

Inside the Game: Entering Sunday evening’s game, it was the San Diego Wave who really had something to lose. The Orlando Pride, who were eliminated from playoff contention some number of games ago, were already focusing on rebuilding for next season, while the Wave were fighting for a win or a draw in order to clinch a playoff berth.

The Wave, however, were quickly dealt a difficult hand. Star striker Alex Morgan started the game on the bench, and though she was technically listed as available, the fact that she sat in street clothes on the sidelines instead of her uniform implied she would not see action. Then, just twenty-or-so minutes into the game, defender and captain Abby Dahlkemper went down with an injury, and the Pride jumped on the Wave’s defensive gap with a goal just minutes later. With no Morgan and no Dahlkemper, the Wave would be forced to adapt.

The match was 1-0 Orlando by the half, and became 2-0 Orlando in the 68th, when Gunny Jónsdóttir found the back of the net. It looked like a spoil was in the works, until the Wave staged a comeback with only 13 minutes to go, earning a 2-2 draw and saving themselves from a much more difficult path to playoff qualification. While the Wave were likely caught off guard by the genuine challenge they faced from the Pride on Sunday night, they can breathe a big sigh of relief and focus on the postseason.

The Skinny: What started out as an easy opportunity for Angel City FC to put themselves in playoff position ended in disappointment, as Racing Louisville took home a surprising win and left Angel City with far less control over their playoff destiny.

One Key Moment: Although Angel City wanted a win on Sunday night, a draw would have been enough to preserve a path to a postseason. Their hopes of even a draw were crushed, however, by Emina Ekic’s goal in the 90th minute, after a lapse in the Angel City defense left her wide open. Ekic’s goal secured Louisville’s win and minimized Angel City’s playoff dreams simultaneously.

Inside the Game: Angel City FC entered Sunday night’s match against Racing Louisville FC in a tricky spot. Just one point behind the Chicago Red Stars and two points behind the North Carolina Courage (and thus, a playoff spot), the Los Angeles footballers needed a win pretty desperately. And a win seemed likely, after Angel City’s strong start paid off with a goal in the 14th minute.

Racing Louisville – who have spent the majority of the 2022 season at the bottom of the table – responded in earnest, equalizing in the 37th and going up 2-1 by the end of the first half after a foul in the box led to a penalty kick. The game still belonged to anyone for the majority of the second half, but as time ticked by, a draw seemed to be a more likely, yet still optimal outcome for Angel City. Fans on the sidelines likely did the mental math in their heads, figuring that if Angel City manages to tie with Louisville, and San Diego beats North Carolina on Friday, Los Angeles enters their next match against Chicago with a decent chance of qualifying.

Unfortunately, even the draw most fans would settle for did not come to fruition. Angel City lost 3-1 to Racing Louisville, who looked better than they have all season – perhaps because they have nothing left to play for. In order for Angel City to have a fighting chance at the playoffs, San Diego must beat North Carolina; therefore, expect to see a lot of Angel City fans rooting for the enemy on Friday.