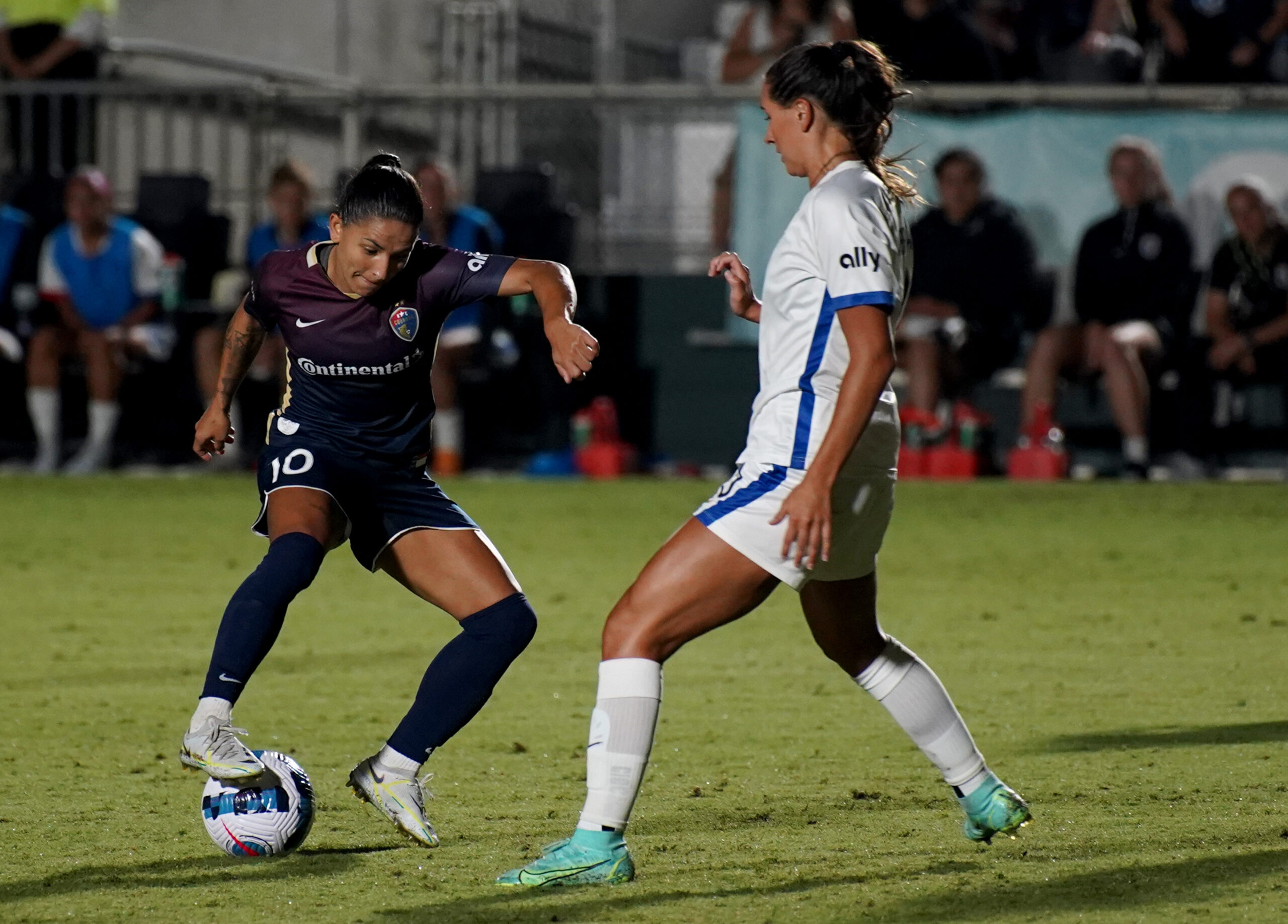 For five minutes on Saturday evening, the North Carolina Courage were above the playoff line on the live table.

Then the relentless attack that put them ahead of OL Reign early in the match gave way to some defensive mistakes. After surrendering the lead, and their ‘pro tem’ playoff position, the Courage gave up another goal and dropped a 2-1 decision. Instead of entering their final three games in the top six, the Courage are instead five points off the pace.

As the week begins, the table has a line of demarcation right below the playoff line where the Red Stars now occupy the final playoff position. Angel City are four points adrift, one ahead of the Courage. Those gaps are slightly misleading, though. Angel City and the Courage are among eight teams in action Wednesday night, after which all National Women’s Soccer League sides will have played 20 times, leaving them two to play.

OL Reign are in the opposite boat from the Courage. Had they lost on Saturday, they would have trailed the Courage on goal difference and sat in seventh. In rallying to win, they vaulted all the way to fifth. The Reign also play Wednesday night and a win would put them level on points with the Shield-leading Wave. The Thorns, though, are in fourth and play Wednesday as well. A Thorns win would send them atop the table with two matches to play.

So, the wildest Shield race since 2013 sees the fourth-place team as the only one with an unabated path to the Shield with two-and-a-half weeks left in the regular season. And the playoff race is so tight that no one is yet assured of being part of the festivities. Here’s where each team stands.

The first-year expansion side is no longer a quick starter. The Wave are now legitimate contenders for the Shield and nearly certain to be in the playoffs. In fact, if neither Angel City nor the Courage win midweek, the Wave will be officially in before taking the field Sunday in Orlando. It has already been a season full of highlights with Alex Morgan leading the Golden Boot race and Jaedyn Shaw scoring in all three appearances at 17 years old, including Saturday’s spectacular opening of Snapdragon Stadium. Now, it’s time too see just how far they can take it.

Raise your hand if you had the Dash beginning the regular season with coaching turmoil followed by an opening-night home loss to the Wave, not getting Rachel Daly back from the EUROs and still entering the final weeks with an inside track on hosting a playoff game. But that’s where we are. The Dash entered the NWSL in 2014 and have yet to see a playoff game played anywhere. All they need to secure one is one more victory. The club has already secured a .500 record for the first time ever and a 10th win would be a visit to double figures for the first time.

The Wave are carrying the torch for expansion sides, but it’s possible that the turnaround of the Current is even more impressive. The Wave built from scratch while the Current inherited the roster from the 2020 Utah Royals and stumbled to a 3-14-7 season in 2021 (a record which sunk to 3-18-8 after a slow start to this regular season). And the turnaround comes despite their two prized off-season acquisitions, Sam Mewis and Lynn Williams, playing a grand total of zero regular-season minutes. Like the Dash, the Current need one more win to assure a playoff spot and stand a good chance of returning playoff soccer to Kansas City for the first time on the women’s side in eight years.

The Thorns appeared on their way into first place with a stranglehold on the Shield until the Current snatched away 2 points with a stoppage-time goal on Sunday. As stated above, the Thorns still have the highest points ceiling of any team, meaning they will win the Shield if they win out. If they get there, it will mean back-to-back top-of-table finishes. It would also extend joint dominance of the trophy with the Courage that dates back to 2016.

OL Reign are having an interesting season. Most thought they were the best team at the Challenge Cup but they went out on penalties in the semifinals. There have been times when they have been the best in the regular season yet there were those tenuous five minutes on Saturday night. So what gives? And at what point is Laura Harvey’s long-term coaching legacy on the line after losing two finals and a home playoff game last season? On the flip side, the Reign have the ability to be really good on all three lines and in goal, have the extra game to work with, and could still conceivably win the Shield.

Kudos to the Red Stars, who have assured themselves of finishing at least .500, something they have now done in all nine NWSL regular seasons. If they can finish the deal and get back to the playoffs, that will be a record-extending seventh straight appearance. This year, they have done it with a new coach and a variety of contributions from various youngsters and role players. But perhaps most importantly, they have kept Vanessa DiBernardo and Danielle Colaprico on the field and off the availability report. Of the six teams above the line, the Red Stars feel like the outlier who would be a true surprise to be standing in Audi Field with the trophy, but stranger things have happened.

One thing is for sure: Angel City are tough to beat. They grind and battle and have squeaked out points they barely deserved on multiple occasions this season. Losing Christen Press crushed the soul of the attack and the attempt to add Sydney Leroux to get it back has been hampered by her injury. If it were not for the Wave, this would be a very impressive showing for a first-year side. That said, the playoffs are still very much in play. If they can beat the Spirit on Wednesday night, they’ll be breathing down the necks of the Red Stars and Reign.

The Courage have the extra game and are playing their best soccer of the season — probably even a bit better than during the Challenge Cup, a tournament they won. But is it too little too late? And are defensive issue still too plentiful to overcome with enough consistency to be a top-six side? Grabbing the early lead only to hand it back almost immediately against OL Reign seems to suggest yes on both fronts. If they don’t make it, Courage fans will look back on that first half and wonder what could have been. If they do make it, it will likely mean they beat Orlando on Wednesday. And after that is a visit from last-place Gotham…

It would take something akin to a miracle for the Pride to make the playoffs, only part of which would be making up a goal differential deficit of 24 on the Red Stars. So 2022 will be another season of no playoffs in Orlando. A young side that has had a lot thrown at them this season made a midseason push to join the conversation, but the momentum predictably petered out. Time will tell if they have built a core capable of eventually contending.

The Spirit are now in the books alongside 2016 FC Kansas City as defending NWSL Champions that failed to return to back it up with a playoff appearance. They are, however, 2-0-0 under interim head coach Albertin Montoya, loaded with talent, and a reasonable bet to bounce back in a big way in 2023.

Racing ended their skid after beating Orlando on Friday night for their first win since May 22. Katie Lund kept a clean sheet against the Pride which is a far cry from the absentee defensive performance the previous game against North Carolina. There is some obvious talent inside Lynn Family Stadium, but the final product seems far away from fruition.

This Gotham season is a contender for most disappointing in NWSL history. They are 0-7-0 under interim head coach Hue Menzies and their 10 straight losses overall is tied for the league record (2018 Spirit). If they lose or draw to OL Reign on Wednesday, and Racing upsets the Thorns in Portland, Gotham will clinch the No. 1 pick for 2023. Is that a bright side?