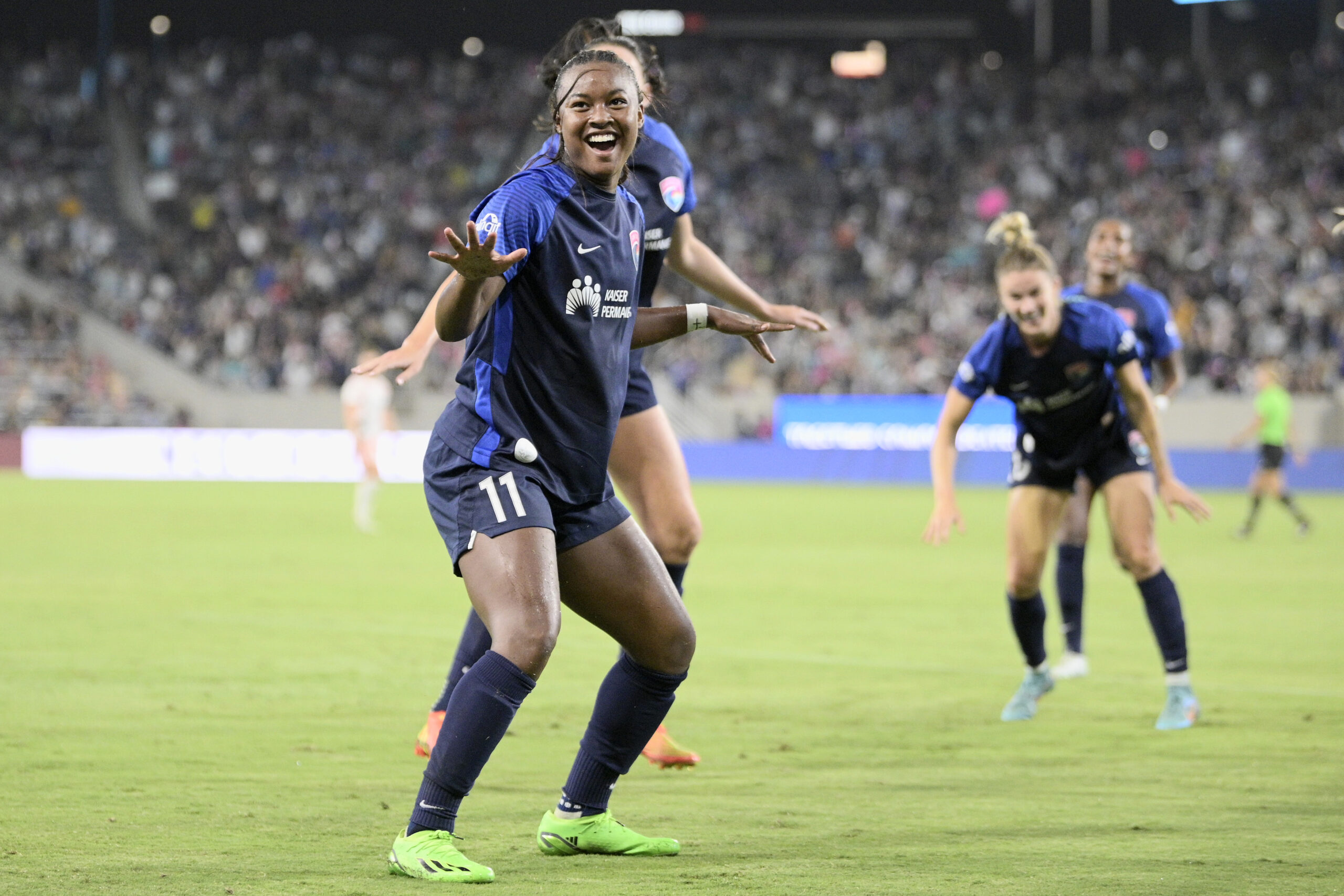 It was a busy night in the National Women’s Soccer League on Saturday night as eight different teams played, with all but one of them still working to secure a spot in the playoffs.

The Skinny: In their home-opener at the brand new Snapdragon Stadium, in front of a record crowd, they defeated Angel City, putting themselves atop the table while making LA’s playoff push more difficult.

One Key Moment: Kailen Sheridan may just be the most influential signing San Diego made in their first year as she saved her third penalty kick of the season. It wasn’t particularly well taken by Savannah McCaskill but it was a huge chance for the visitors that Sheridan squashed in front of some 32,000 fans who cheered louder for the save than they did the goal.

Inside the Game: For Angel City, the chances were there with 13 shots and control of possession, but the finishing was majorly lacking and cost them a result. On the other side, the Wave may not have had much flow in their offense but they took their chances, specifically 17-year-old Jaedyn Shaw who scored the game-winner with a very mature header. The young player has been fantastic since joining the Wave, scoring in all three of her starts and otherwise contributing to the attack.

The Skinny: In a game with massive implications for the playoffs OL Reign came out victorious over the Courage, getting their first-ever win in Cary, North Carolina, and a massive three points. This result makes getting into the top six an even greater challenge for the Courage now with just three games left to play, but not impossible. Goals from Megan Rapinoe and Rose Lavelle earned the comeback victory for the visitors.

One Key Moment: This set piece goal from Megan Rapinoe 25 minutes in turned out to be the game-winner and boy was it a stunner. She shouldn’t have been able to score from that far out but with perfect placement, an imperfect wall, and an awkward bounce for the keeper she was able to squeak it in the near post.

Inside the Game: North Carolina came out firing and forced an own goal just five minutes into the match. The initial work from Kerolin drawing and then losing her defender leaves acres of space for Ryan Williams whose cross is deflected in by Alana Cook. But it was a quality cross and had Cook not deflected it it very likely could’ve been a tap in.

In what must feel like a nice change for OL Reign they managed to get this win despite fewer chances because they actually converted. In a scramble in front of the goal after a shot from Rapinoe was saved Rose Lavelle managed to get the ball in the back of the net. It wasn’t a particularly creative chance nor did it come from a flowing offense, but it was a goal and a crucial quick equalizer at that.

There would be no more goals in this game after Rapinoe’s but there was no lack of chances for the home side. They controlled possession and created dangerous chances but Phallon Tullis-Joyce came up with several big saves. Alana Cook as well, after conceding the own goal, had a fantastic match defensively, shutting down the Courage attack and getting in blocks. These were close to goal, high percentage chances, that weren’t converted. Unfortunately for North Carolina as well their attack suffered greatly after Kerolin had to leave the match 20 minutes into the second half. After an initial spurt of energy brought by the Courage subs, the Reign killed off the last 20 minutes of the match, controlling possession and seeing out a crucial victory.

The Skinny: Thanks to their first-ever away victory in Chicago, Houston Dash now only need one win to secure their first-ever postseason! For Chicago, losses by Angel City and North Carolina, firmed their hold on the sixth spot so they are safe for now. It was a tight match that could’ve gone either way but in the end Houston created a few more chances and Ebony Salmon was ruthless.

One Key Moment: This goal starts with Jane Campbell’s distribution, is flicked on to Nichelle Prince who finds Ebony Salmon in behind, and Salmon’s finish is brilliant for the only goal of the match.

Inside the Game: This game was battled out in the midfield and very close but Houston were able to take advantage of a moment in transition, typically their specialty. Houston’s backline did well to continuously catch Chicago offside while also frustrating their play out of the back with a high press. It was a disciplined performance from the Dash that has them looking in top form.

The Skinny: This result marks the 14th straight loss for Gotham while Washington earned their second win in a row but are now officially out of playoff contention regardless.

One Key Moment: It took a while for the breakthrough to come but it finally did five minutes into the second half through Tara McKeown. It’s a bummer that McKeown didn’t score on the first attempt because that ball in from Ashley Sanchez deserved to go down as an assist but it is a good effort from McKeown to follow up her attempted cross and go for placement over power with the keeper out of her goal.

Inside the Game: To say that Trinity Rodman was everywhere in this game feels like an understatement but it’s true, she was everywhere affecting the play. In the first half, it felt like she should’ve had multiple assists or goals but saves from Michelle Betos and Ashley Hatch hitting the bar kept the Spirit off the scoresheet in the first half. Gotham created a couple of first-half chances, including one very good one, but Washington had the more consistent opportunities, and neither found a goal in that first 45.

In the second half, Betos continued to keep her side in the game with great saves but made a major error with five minutes left to go that killed off any chance Gotham had of getting their first draw of the season. Ashley Sanchez was the one to pick her pocket and consequentially score with ease.