With new signings and tactical flexibility, can Chelsea conquer Europe? 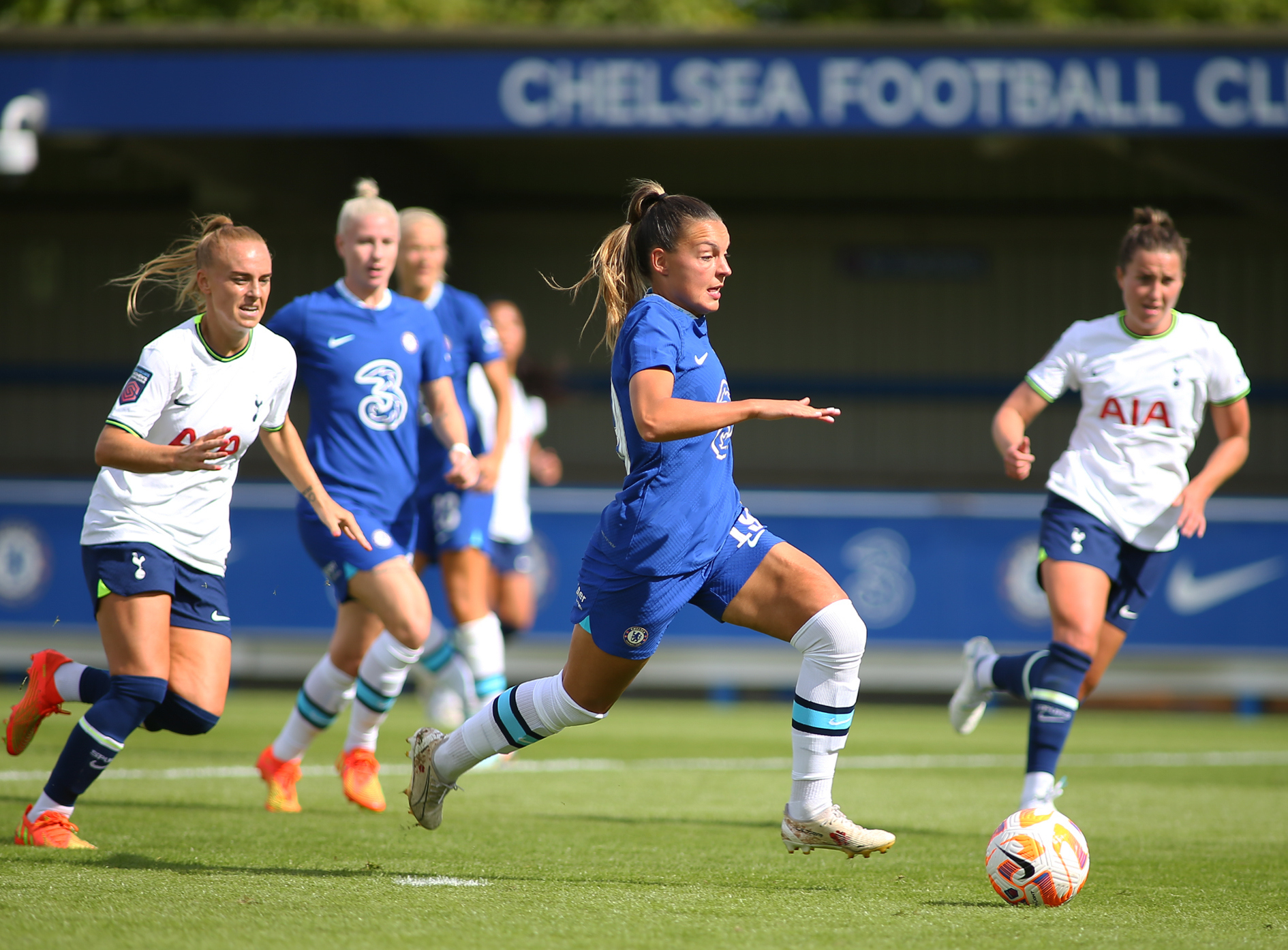 Preseason is in full swing and Chelsea will hope to replicate last season’s domestic achievements. Winning the Women’s Super League (WSL) and F.A. Cup double meant Chelsea had yet another successful season under the tutelage of Emma Hayes, but there remained an incomplete feeling due to the team’s performance in Europe..

As we enter the 2022/23 season, it’s there where the Blues will be looking to improve their standing extensively. After reaching the final of the UEFA Women’s Champions League two seasons ago, Chelsea was humbled in the group stages last season, going out behind Wolfsburg and Juventus. Such an early and unexpected exit gave Chelsea the focus to claim the domestic titles. With three straight WSL titles in hand, the onus is now on Hayes to improve in Europe.

Chelsea has returned from a preseason tour of the United States participating in the ICC tournament where the Blues played alongside defending European champions Olympique Lyonnais, Portland Thorns, and Monterrey. They lost once and won one game but the performances in both matches give fans much more optimism going into the new season. They ended their preseason with a home game against Tottenham Hotspur.

A penalty-shootout loss to Lyon in the semifinal after giving up a 2-0 lead was hard to swallow but their performance for 80 minutes was full of energy and vigour. Their win over Portland Thorns in the third-place match was hard fought and showed resilience. There was a good array of displays from different personnel and Hayes will have been happy with what she saw tactically.

Compared to last season, there is some wonder how much Hayes would adapt her tactical identity to create a more cohesive and ruthless Chelsea. Those two games saw Chelsea persist with what looked like a 3-4-3 once again, but the main takeaway is the flexibility in switching from a three- and four-player defensive line.

The team switched between the 3-4-3 and 4-4-2 systems that saw one of the wing-backs push up into a winger position. What makes this intriguing is Chelsea will be able to adapt to different circumstances within games. As a result, Lyon struggled to deal with the midfield movement that enabled the forwards to operate in more advanced positions.

What stood out the most was the space Pernille Harder had to play. In some regard, she played as the second striker alongside Sam Kerr, which meant she was playing much more centrally next to a player that was willing to make direct runs in behind. Maximizing Harder will be at the forefront of Hayes’ plans and if Harder can fire on all cylinders then it gives Chelsea a very good chance in the UEFA Women’s Champions League.

Subscribers-only reading you can’t get anywhere else

Another standout tactical change was moving Erin Cuthbert into a No. 6 role. Playing her as a deeper lying midfielder caught the eye and her ability to control play from the back and spray passes into the forward areas with marauding wingers and wing-backs meant she could play riskier passes. Coupled with her tenacious tackling and improved positional awareness, Cuthbert could be the long-term solution to becoming Chelsea’s defensive midfielder of choice given the number of new signings made in this area. Ji So-yun’s departure after nearly a decade with the team cannot be understated.

A lot of the issues with Chelsea’s games last season came when trying to break down low-block teams and it seemed as though Chelsea would make like-for-like changes under the same system. Hayes did look to make more drastic changes in certain games as they went down to the wire, but there seemingly wasn’t trust in moving to a back-four system regularly. It isn’t all down to trust; rather, it was the make-up of the squad that contributed to Hayes persisting with a back three. However, this seems to have changed given she’s made some excellent new additions over the summer.

Chelsea was busy in the transfer market, bringing in seven new players. Two of those are academy prospects but it shows the level of competition Hayes wants in her squad.

In truth, the team needed reinforcements in certain positions; Eve Perisset, the French international fullback brings depth and experience to a back line crying for a natural fullback while Kadeisha Buchanan, signed from Lyon, offers superstar pedigree and a winning mentality at center back. Johanna Rytting Kaneryd, Kateřina Svitková, and Jelena Čanković, all represent high quality options that are capable first-team starters or squad players.

Svitková has WSL experience from her tenure at West Ham so adaptation shouldn’t be much of an issue. Kaneryd and Čanković bring flair and excitement from the Damallsvenskan and many experts of Scandinavian football are eager to see their impact. Čanković comes with a lot of praise and is thought to be Ji’s replacement. Having such variety and excellence allows Chelsea to rotate their squad more.

January signing Lauren James looks ready to play a full season and given her start to these preseason games, there is reason to be optimistic. She played well and her goal against Lyon was extremely well taken. James’ profile is distinctive and something Chelsea doesn’t currently have in its squad. The talented forward can now show her skills with a full preseason behind her.

What’s important is Hayes has options now. Every game becomes much harder to predict and the level of tactical versatility that these new profiles bring means Chelsea can potentially adapt from game to game. The question is: How do you fit some of these high-profile players into the same team? There’s a thought of playing a 4-2-3-1 or 4-4-2 with Magdalena Eriksson, Millie Bright, and Buchanan in the same side. Using Eriksson as the nominal left back, there is a way to bring all three players in whilst transforming between the 3-4-3 and 4-4-2. Given Eriksson has played as a left back for Sweden, the concept could become a reality and represents another show of strength.

Ultimately, being one step ahead and having the resources and tactical versatility is key. Having a squad to maintain their charge domestically and in Europe has been the secret to success for Barcelona and Lyon in recent years. Just the example of using Eriksson at left back is a tactical plan that could be as unpredictable as playing with Maren Mjelde, Buchanan, and Aniek Nouwen as a back three. The point is that Chelsea can head into most games and find solutions to problems they might have not had the tools for in the past.

Chelsea’s start to the season against West Ham at Stamford Bridge will be met with elation and excitement to see new faces in action. What’s even more interesting is how Hayes intends to start the season tactically and whether they can get the better of their opponents much more easily than before.

One thing is for certain, Chelsea and Emma Hayes are going into this season much better prepared and look ready to tackle Europe to achieve the coveted Champions League title.

Which league is the best in Europe? A data-driven approach to the endless argument
Rapinoe, Huerta, and the 2022 Reign’s reliance on crossing