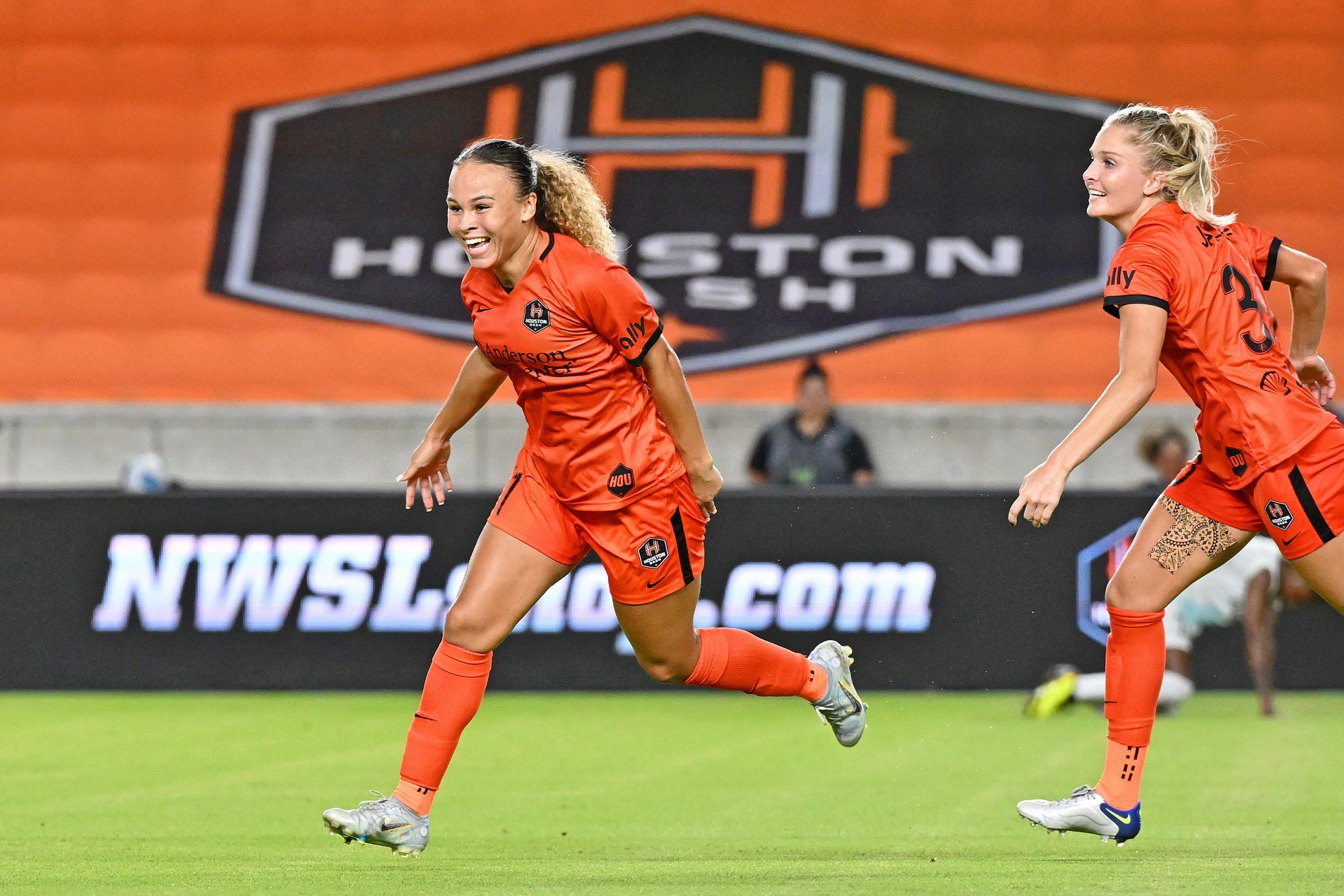 The National Women’s Soccer League’s roster freeze deadline passed quietly on Thursday, but the last few weeks saw a flurry of movement sure to reshape the autumn playoff push.

The Houston Dash and NJ/NY Gotham FC have been at the center of the action including the one between the clubs that saw reigning NWSL Defender of the Year Caprice Dydasco packing for the Houston heat.

Dydasco becomes the third player to be traded during or after the season she won a major award. The others were Sam Kerr, who asked out of then Sky Blue FC, and Ashley Hatch, who was part of a package the North Carolina Courage used to acquire Crystal Dunn.

Dydasco had appeared in a club-record 54 consecutive regular-season matches for Sky Blue/Gotham (a streak that, oddly enough, survived an ACL tear thanks to the COVID-induced lack of a regular season in 2020) before being announced as a late scratch from the team’s August 17 match in Houston due to personal reasons. Two days later, Dydasco was announced as the newest member of the Dash with between $120,000 and $150,000 in allocation money going to Gotham ($120,000 plus $10,000 for each playoff game Dydasco appears in this season).

Neither team made the trade in a vacuum. A day earlier, the Dash shipped Haley Hanson to Orlando for $75,000 in allocation money and a second-round pick in 2023. Meanwhile, Gotham flipped the Dydasco money and a whole lot more — $200,000 in total plus a first-round pick — to Kansas City for Victoria Pickett.

In one sense, Dydasco is Hanson’s replacement in Houston, although Natalie Jacobs was regularly starting ahead of Hanson at right fullback in Houston. Jacobs and Dydasco both represent fullback options who can contribute to the attack. Dydasco is more of an on-the-ball attacker making overlapping runs and taking corner kicks. Jacobs has one of the deadliest long-balls in the NWSL. That said, it was interesting to see the Dash mess around with the back line considering this is the unit’s best year by far since the franchise came into being in 2014.

Dydasco’s Dash debut only lasted 10 minutes in relief of Jacobs in a 3-1 loss in San Diego last weekend. The Dash, however, are 4-2-1 since Jacobs began starting so there is no guarantee Dydasco walks in and starts even after a full week of training.

The 2022 Dash are something of a contradiction. Two years after their 15-minutes-of-fame run through the Challenge Cup knockout stage, the Dash finally appear to be on a collision course with their first playoff appearance. James Clarkson was finally able to put together a roster deep enough to withstand the summer absence of Rachel Daly, which is now a permanent void after Daly was transferred to Aston Villa following the EUROs.

Clarkson also looked to have the culture around the club heading in the right direction. But he was suspended ahead of the regular-season opener for reasons yet to be made public — or even, according to multiple sources, told directly to him — and it is possible his coaching acumen has been exposed a bit. First, Sarah Lowdon, and now Juan Carlos Amoros, have the Dash playing crisp, responsible soccer.

An earlier trade proved to be quite fruitful for the Dash. Near the end of June, they acquired Ebony Salmon from Racing Louisville in exchange for allocation money and performance bonuses that could total just less than $200,000. Salmon has blossomed in Houston, scoring seven goals since her July 1 debut. That includes a hat trick to match Nichelle Prince, who bagged the first three-goal game in Dash history earlier this season.

Salmon, Prince, and Maria Sanchez give the Dash one of the more formidable front lines in the league even without Daly. And they have freed space for Shea Groom to operate at her most effective self in midfield.

We’ll see if Dydasco has enough time to fully integrate herself into the back line. A wrinkle is that she arrived in Houston on four yellow cards, meaning one more before the final match of the season will result in a suspension. A fifth yellow in the final match however, does not carry over into the playoffs.

The Dash emerged from the recent trades in the red on dollars but probably with an upgrade at right back, not to mention that second-round pick in 2022 (which will be OL Reign’s natural pick) which, if utilized well, will swing the Hanson trade heavily in their favor.

The Dydasco news came as a surprise in New Jersey, where she was a stalwart on the club since being acquired on draft day in 2019. But when Gotham used the money to acquire Pickett, it signaled that management was doing more than just changing coaches in an attempt to improve fortunes.

Pickett is a midfielder in her second NWSL season after being selected 15th overall in 2021. She entered the league with a ready-made ability to break lines in possession, and has continued to do so into her sophomore season. But the Current recently signed Claire Lavogez and she has quickly meshed with teammates and scored a worldie to beat the Courage two weeks ago.

Lavogez’s presence allowed the Current to move on from Pickett. The club has shown a penchant for making big splashes so expect the $200,000 to be used for roster upgrades down the road, and the first-round pick will likely be OL Reign’s (traded to Gotham for the No. 8 pick last year) which is currently No. 8. The Current enter the weekend on an 11-match unbeaten run and can only wonder what things would look like had Lynn Williams and Sam Mewis been healthy this season.

As for Gotham, the price for Pickett may prove to be exorbitant, but the 26-year-old has the exact attributes that are missing from the club’s attack. Dating back to the Challenge Cup, Gotham has rarely won the midfield battle. As a result, Midge Purce and Ifeoma Onumonu have not spent enough time on the ball in dangerous areas. Pickett should help remedy that. Her presence should also free up McCall Zerboni to take on a more defensive role, one that has served her incredibly well over the years. Zerboni could also spend more time supporting the back line which has been a bit turnover prone, and will now be without Dydasco.

As for that back line, the most likely replacement for Dydasco is Ellie Jean. The former Eindhoven player spent some time on the left side while Imani Dorsey was in COVID-19 protocol and then switched to the right after the trade. The sample size is small, but Jean has appeared more comfortable on the right.

The 2022 season is probably done and dusted for Gotham in terms of being a playoff side, but they do have seven more games to try and set a course for 2023.

The Orlando Pride, meanwhile, are quietly hanging around the playoff race and they added Hanson. General manager Ian Fleming has touted the club’s stockpile of allocation money and draft picks. Hanson is hardly a showstopper but will make the back line better and add veteran presence of a team that has become much younger since earlier this year. Can they keep up their strong form and claim what would be a shocking playoff spot?