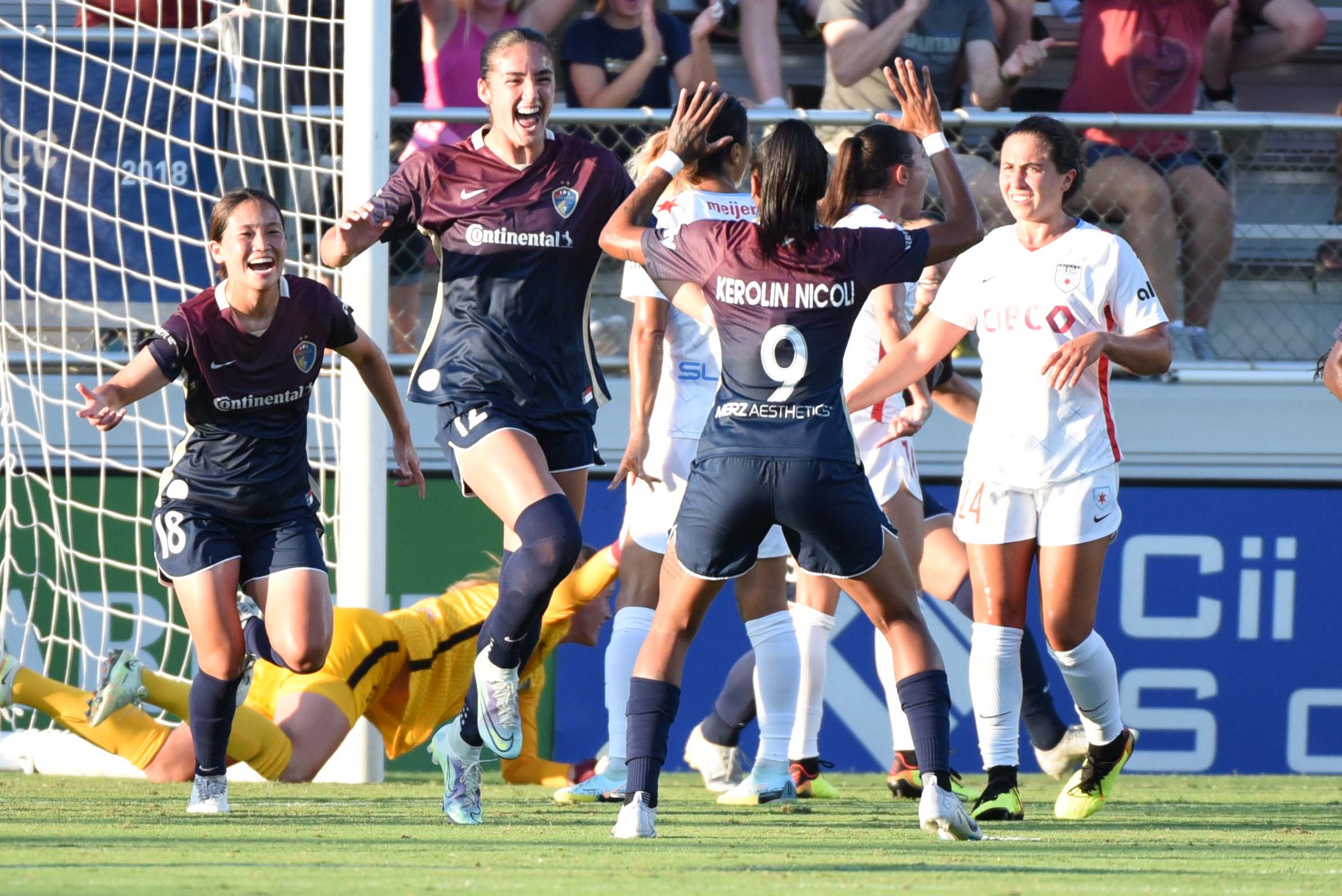 Three matches were played in the National Women’s Soccer League on Saturday night.

The Skinny: Orlando took home the win against NJ/NY and increased their unbeaten streak to seven matches in a row, but consistent pressure and a late goal from Gotham forced the Pride to play hard for the full ninety.

One Key Moment: The Pride’s second goal in the 73rd minute, from new squad member Ally Watt, seemed to solidify their path towards victory. But when Gotham’s Kristie Mewis responded with a goal in the 75th, the Pride’s presumptive lead was drawn into question. Ultimately, Orlando took home the win, but not without a tense and aggressive final 15 minutes from both sides.

Inside the Game: There’s a lot going on for both NJ/NY Gotham FC and the Orlando Pride, who met tonight at Subaru Park in Chester, PA. While Gotham FC’s new interim Coach Hue Menzies tries to find a way to salvage the team’s season of under performances, the Pride has seen a summer of trades and roster changes as they fight for a playoff spot. A lot is evidently on the line for both teams, and the high stakes were present for the entire first half, which ended with solid composure from Orlando, aggressive pressing from Gotham, and yet, no score.

Whatever the Pride heard in their halftime talk seemed to work, however, as they got on the board with a goal from Celia Jimenez only four minutes into the second half. The Pride then ensured their own lead with a goal from Ally Watt, her first for the franchise, in the 73rd. The Pride had Gotham playing on their heels, and the game seemed all but won from there; until, that is, Kristie Mewis found the back of the net in the 75th. The last fifteen minutes of the game were a tense battle, with both sides painfully aware of how desperately they needed those three points. Ultimately, it was Orlando’s for the taking.

The Skinny: After an even-keeled first half between the North Carolina Courage and the Chicago Red Stars that saw one Courage goal, North Carolina trounced Chicago in the second half, taking home a 4-0 win and performing with the cohesion and confidence they have lacked all season.

One Key Moment: When Diana Ordoñez scored in the 10th minute and helped North Carolina take an early lead, it was clear that the Courage were determined to play like the team they know they can be on Saturday night. But when Diana Ordoñez scored again in the 74th minute, it was clear that the Mexican-American footballer may be the major key to the team’s success right now.

Inside the Game: The Courage entered Saturday night’s match against the Red Stars in last place, desperate for a win. The Red Stars, a reliably top-half team all season, have been in a scoring slump and were also on a mission to take home three points. But when Ordoñez scored in the 10th minute to make it 1-0 for North Carolina, the tone of the match was set, and it wouldn’t change until the final whistle blew.

At the half, Chicago still looked alive – the Red Stars made more shots than the Courage in the first half (though less on target), and the possession was split pretty evenly between both sides. But in the second 45, North Carolina simply rained goals on Chicago. Fuka Nagano’s goal in the 64th made it 2-0 for the Courage, and another Ordoñez goal plus a shot from Rylee Baisden that found the back of the net – for the first time in her NWSL career – provided a giddy, lopsided victory for the Courage and a confusing, discouraging loss for the Red Stars.

The Skinny: Despite going down a goal early, the San Diego Wave roared back on Saturday night to defeat the visiting Houston Dash by three goals to one. En route to the win, Alex Morgan scored her milestone 50th NWSL regular season goal.

One Key Moment: A key moment of this match wasn’t when a goal was scored, but it was the Dash’s late second half miss in front of goal. With the Wave leading 2-1, the Dash came within inches of equalizing. But the ball bounced off of the far post at just too wide of an angle for Nichelle Prince to knock in the rebound, and the chance was squandered. Just minutes later, Sofia Jakobsson scored the Wave’s insurance goal at the other end.

Inside the Game: The Dash started well with none other than Ebony Salmon getting on the scoresheet early. Salmon’s goal – her eighth of the season – resulted from a poor clearance attempt from the Wave in front of goal. Despite limited space and incoming defensive pressure, Salmon was able to slot her shot past Wave keeper Carly Telford with a nice bit of skill.

But San Diego didn’t panic, and the equalizer came quickly. Morgan’s 50th was a left footed rocket that sailed past Jane Campbell.

San Diego went ahead through Amirah Ali in the second half, as she was able to beat Campbell to a cross on the Houston goal line. And after the Wave survived the aforementioned scare at the other end deep in the half, some beautiful combination play lead to their third goal on the night, Jakobsson’s first in the NWSL.

With the win, San Diego sit at the top the table, even on points with Portland, who have two games in hand.