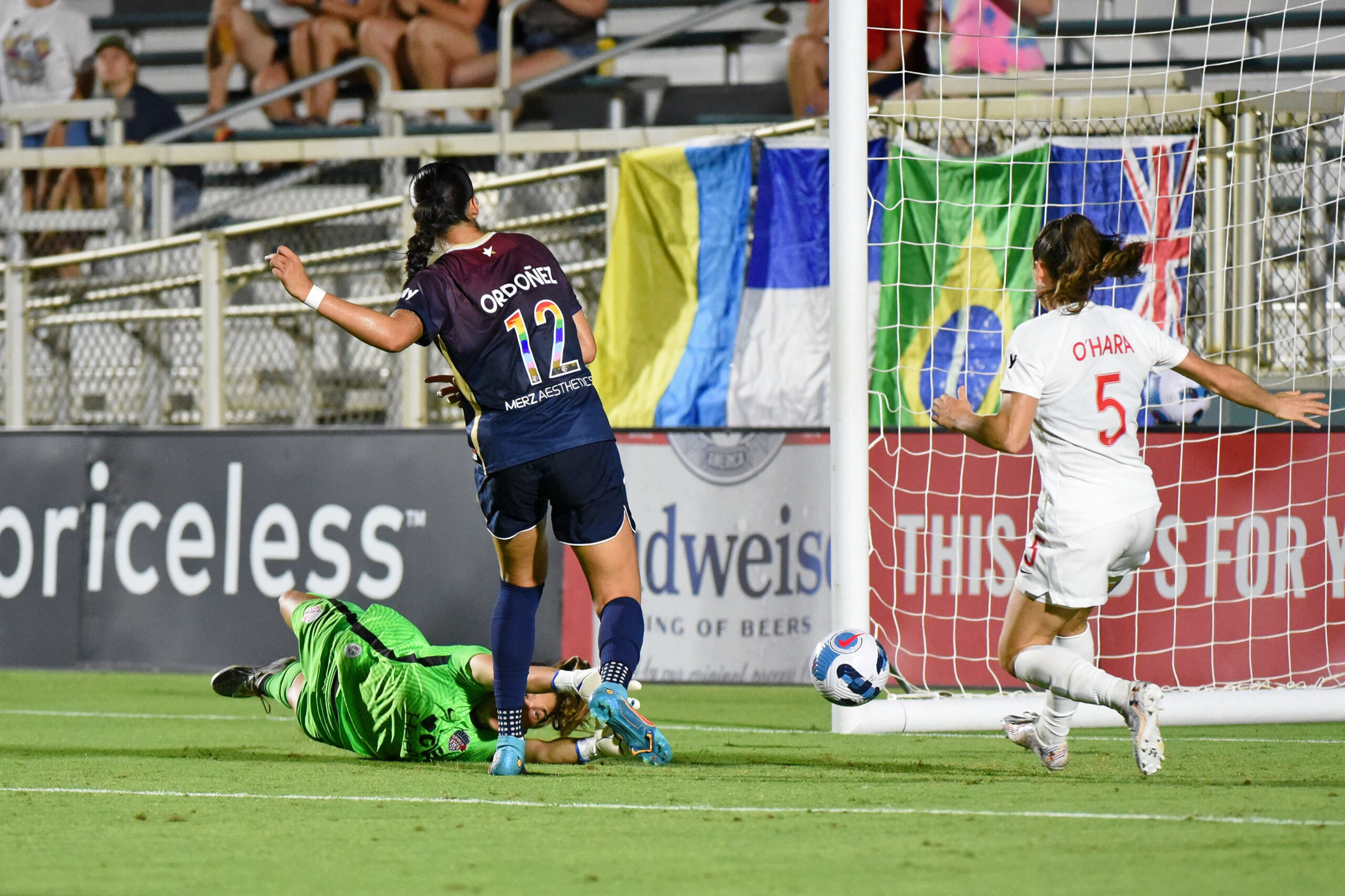 Two matches were played in the National Women’s Soccer League on Friday. The first match kicked off in North Carolina against Washington but a lengthy lightning delay meant Portland and Louisville finished up first after starting second.

The Skinny: Both teams came into this match desperately needing three points to move off the bottom of the table, and both will feel they did enough to earn those points, and in the end, they are only going home with one point each. Washington in particular will be disappointed as they held the lead three separate times in this match and failed to hold on.

One Key Moment: The last goal of this match, which determined the tie, is also the most questionable. The conversion of the penalty kick was perfection from Diana Ordoñez but the foul that gave the Spirit the kick is hard to see at best. Granted the camera angles and quality didn’t give us a great look so it is hard to tell, but the ball isn’t even near the supposed foul. Sam Staab certainly disagreed with the decision and the Spirit will feel they were robbed in that moment.

Inside the Game: The goals in this game were scored in two bunches of three. The first three came at the very end of the first half. Trinity Rodman would go on to score two in this game and she continues to show her ability as well as just how strong her connection with Ashley Sanchez is.

Brittany Ratcliffe provided a near-immediate response for the home team with great strength to beat her defender and get the shot off. It looked, only a minute later, like the Spirit were back on top after Tara McKeown scored Washington’s second goal of the night, assisted by a brilliant cross from Kelley O’Hara.

The second half didn’t take long to provide its batch of three goals and Washington will be upset with how they conceded. The Spirit got caught trying to play out of the back and Aubrey Kingsbury, under pressure from Ordoñez, passed the ball directly to Meredith Speck in the box who then played the perfect cross back to Ordoñez for the tap-in past Kingsbury.

Three minutes later Trinity Rodman would get her second of the match, an absolute banger. Ashley Sanchez provided the terrific quality ball in behind but that rocketed near post finish was all Rodman.

That lead wouldn’t last very long as Ordoñez equalized from the spot just four minutes later. Both teams had some more chances but none provided a winner and the game ended with a wasted Courage free kick just outside the box.

The Skinny: Sophia Smith would open the scoring early in this one but Alex Chidiac would come back with her own moment of individual brilliance to tie things up. Poor defensive marking was Racing’s downfall allowing a second-half winner from the visitors. Louisville put up a good fight in front of their home crowd but didn’t have enough to earn a point in the end.

One Key Moment: Hina Sugita’s game-winner is a bit of a defensive disaster from Louisville. The backline just shut off after Rocky Rodriguez’s shot that forced a save out of Katie Lund but Sugita stayed active and aware, easily getting to the rebound first for an easy finish.

Inside the Game: Portland got on the board early as their leading scorer, Sophia Smith, returned from international duty and immediately got back to where she left off. The opener came from a hit and hope ball by Morgan Weaver but Smith did what she does so brilliantly, make goals out of nothing. Smith controlled the ball perfectly and then drove it into the box from the halfway line, finishing it off with a perfectly placed strike.

After that goal it looked like the Thorns were going to increase their lead, as their constant pressure appeared to have Louisville exhausted from constantly trying to absorb their attacks. The good thing Racing did was get back into the match relatively quickly, equalizing 30 minutes into the first half. Jaelin Howell switched the field of play to find Alex Chidiac isolated on the left side of the box, with just one defender to beat, she used terrific footwork to beat her mark and then finish at the near post on a tight angle.

The second half featured quite a few chances for both sides but the home side, in particular, looked the more likely to score. This makes the goal they gave up particularly frustrating, as it was entirely unforced. Hina Sugita would score the go-ahead goal in the 74th minute but that was not the end of this match. Louisville had the best of the late chances as they forced two brilliant saves in a row out of Bella Bixby in the 83rd minute. The win sends Portland to the top of the NWSL table while Louisville are now winless in 8 consecutive matches.