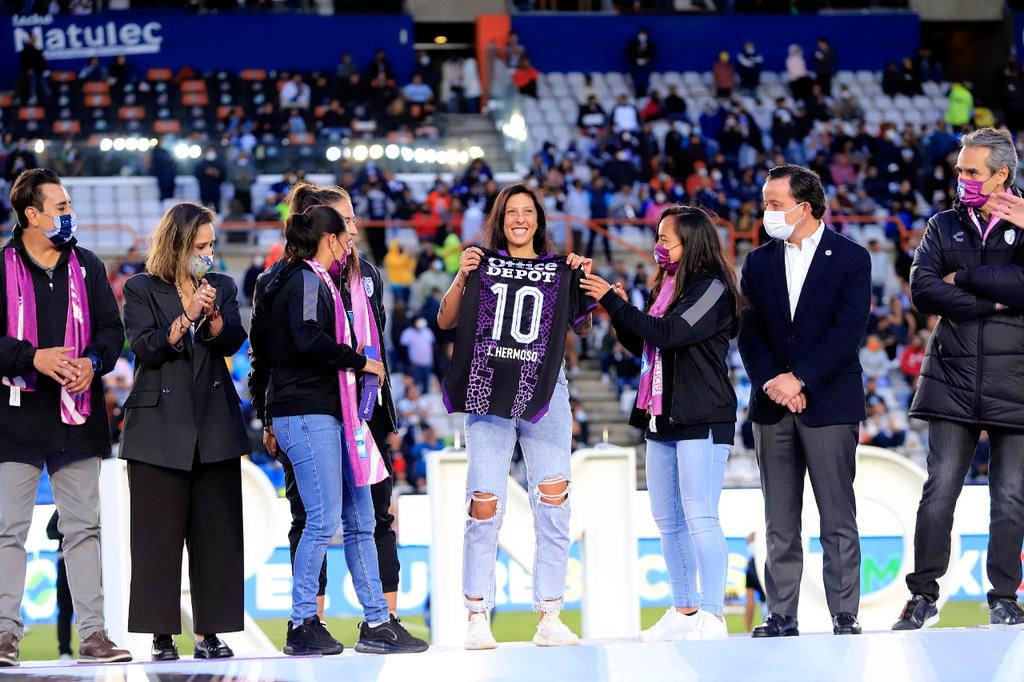 Jenni Hermoso was the biggest signing of the Liga MX Femenil offseason by a mile. The former Barcelona forward, who won the UEFA Women’s Champions League with the club in 2021, signed with Pachuca. That signing showed a growth in Liga MX Femenil’s competitiveness and attractiveness around the world.

Hermoso was introduced to fans at Pachuca’s men’s team during their home match against UNAM Pumas on Sunday, July 24. The women’s team was on the road this week, and fell to Santos Laguna, 3-2.

“I’ve only been here for 24 hours,” Hermoso said on Fox Gol México (Fox Sports). “They have been intense hours. Living here is something I couldn’t have imagined if it wasn’t for me. I’ve dreamed it many times. To be able to have a presentation like this, or to have people receive you with so much affection when you’ve barely given anything, right? It’s unlike anything I’ve ever done in football, and for me it’s a pleasure to be in this family because I believe it’s a real family.”

Hermoso’s debut is still up in the air, as she is recovering from a knee injury that saw her miss the 2022 EURO with Spain. Meanwhile, Pachuca will also enjoy the return of Charlyn Corral, their leading goal scorer last season in the Clausura. Pachuca made it to the Liga MX Femenil final in the spring, but lost to Chivas, repeating history from the very first Liga MX Femenil final.

Hermoso said that her decision to come to Pachuca was to experience playing in another league.

“I have lived many things in Europe in Spain with a team like Barcelona that because for me is the best team in the world. But hey, I think life is to assume power challenges enjoy other experiences. Thanks to what I have trained, I have sacrificed, today I can be living in another country and enjoy another league… This challenge comes with a lot of responsibility.”

Corral, who formerly played in the Spanish league for Levante and Atlético Madrid Femenino, was a big factor in Hermoso’s signing with Pachuca, as well.

“We are lucky to play together and I hope we score many goals,” Hermoso said.

The Spanish international also stated that the decision to come to Pachuca was based on the professionalism of the club and facilities. Hermoso said that the vision of Pachuca is clear: to win championships and be regarded as one of the successful clubs, like Tigres or Monterrey.

“People are not aware of everything that Pachuca has… all of the facilities that I think are in very few places. I’m privileged to be able to be here today and the goal is clear. They have that thorn to make Pachuca a champion.”

While Hermoso’s debut will be on hold while she recovers from her injury, she knows that fans are eagerly awaiting her first match in purple.

“I hope that the knee goes well. I have not been able to train as much as I would have liked. The last few days have been very difficult with many changes, many moves, and I have not had time to recover. But here, I think I have some very good means to be able to recover as soon as possible and be with my colleagues soon.”

Tigres got their first victory of the 2022 Apertura season under head coach Carmelina Moscato, taking down Querétaro, 4-0. The loss for Querétaro comes after a big Week 2 upset, with Gallos defeating C.F. Monterrey.

Tigres got their mojo back with the return of Stephany Mayor, Bianca Sierra and Lizbeth Ovalle from international duty, after failing to qualify for the World Cup with Mexico. Mayor scored twice, while Ovalle and American Mia Fishel added tallies of their own.

In first half stoppage time, Mayor collected the ball off a cross and shot low through a couple Querétaro defenders and past a diving Marta Alemany. Fishel opened up the second half scoring off a breakaway, slipping between two defenders and going one-on-one with goalkeeper Alemany.

Ovalle notched her goal in the 63rd minute, firing from almost 30 yards out to send Alemany flying, with the ball in the back of her net. Mayor got the fourth and final tally in the 76th minute, scoring on a penalty conversion.

How England made the EURO 2022 final, and why it could change everything at home
Record crowds, more teams, new champion: 2022 Africa Women Cup of Nations leaves a legacy