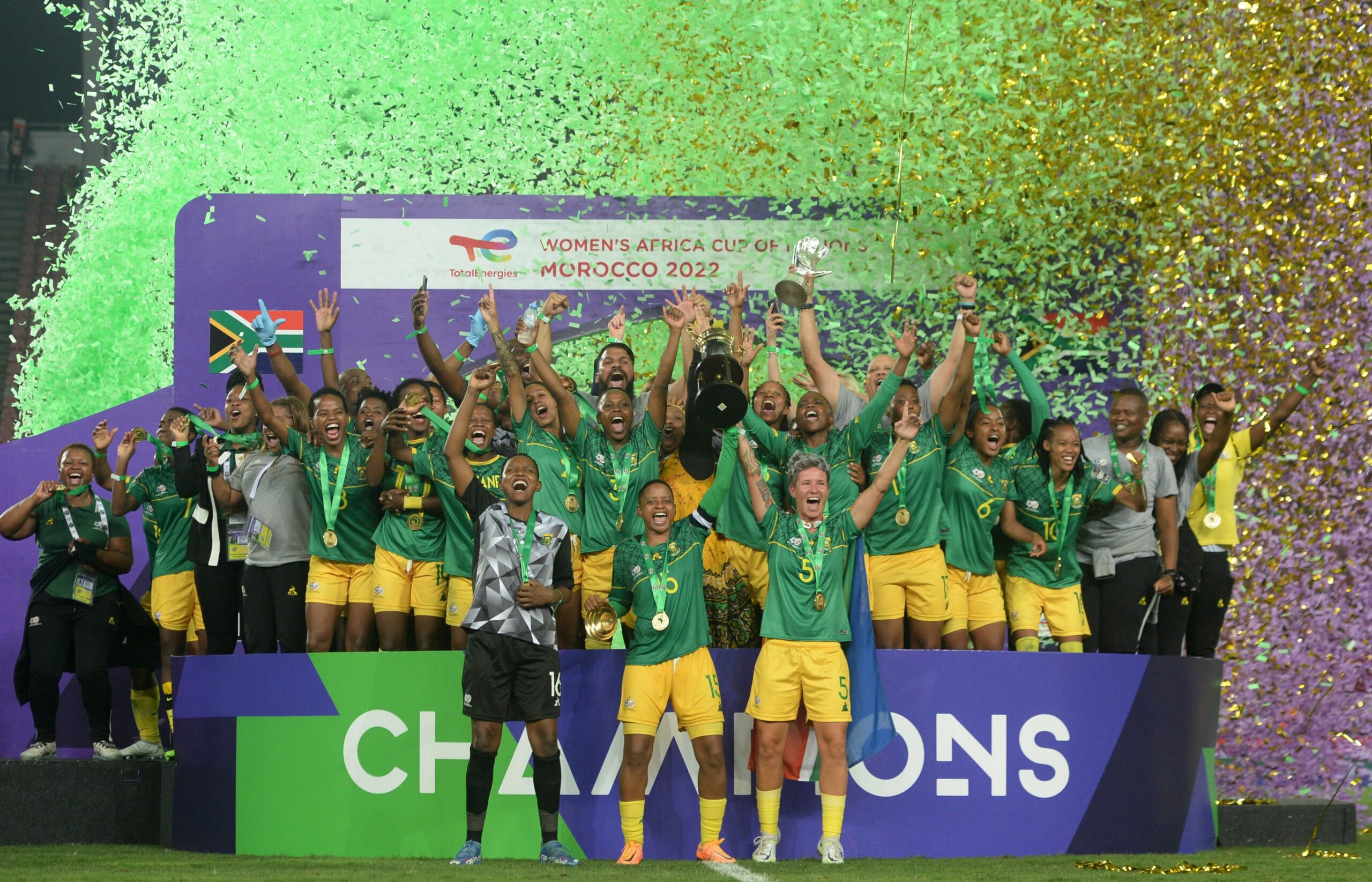 For the first time in 12 years, a different team joined Nigeria and Equatorial Guinea in the elite club of WACON winners and took their seat in the hall of fame. South Africa, led by head coach Desiree Ellis, etched their names in the history books after brilliantly defeating hosts Morocco 2-1 to clinch a title they have tried to win for over two decades. After six finals since 1995, Banyana Banyana have achieved a lifelong dream and goal.

The build-up to Saturday’s final was nothing short of hard work and determination from both teams. South Africa had just narrowly squeezed past Zambia in the semifinal after a penalty was awarded to them in stoppage time. Morocco, on the other hand, had to proffer everything in their arsenal to stumble the Super Falcons of Nigeria to the ground and cruise to the finals. Nigeria, despite being two players down, dragged the game through to a penalty shootout. where NJ/NY Gotham FC forward Ifeoma Onumonu missed her kick to give Morocco an edge over the 11-time champions.

Morocco entered the final with boosted confidence and the immense support of their home fans who just couldn’t get the idea of winning the title out of their minds. For Morocco, qualifying for the World Cup for the first time was second to their main priority which was to win the WACON trophy. The whole idea was to host and win it like previous winners Nigeria and Equatorial Guinea. A crowd of over 45,000 fans turned up for the final to support the home team, as they had all tournament.

Banyana Banyana also beat Nigeria by 2-0 in their Group C opening game. Both finalists had defeated the most titled nation in the WACON to be in the final. The quality of each had made it difficult to predict who might plant their flag on the summit of the WACON.

The first half displayed high tactical prowess by both teams; however, South Africa was lethal with their attack and through Hilda Magaia. Banyana Banyana came probing to break the deadlock when Magaia almost gave them the lead inside the 10th minute.

Morocco’s first attempt at goal came in the 40th minute, when Tottenham Hotspur striker Rosella Ayane’s shot was just inches away from hitting the target.

The second half opened up more, with both teams aiming to break the deadlock. Jermaine Seoposenwe perfectly cut back to Magaia, who slotted the ball home to put South Africa in the lead. Morocco tried to get a quickfire equalizer but Karabo Dhlamini’s left-footed cross into the box was picked up by Magaia again, who calmly lofted it past the goalkeeper to sink the heart of the fans even further in the 71st minute.

Giving up was not written in the playbook of Morocco, though some fans upped and left the stadium when they saw no way out for the team.

Fatima Tagnaout teed up the ball for Ayane who erupted the dejected crowd with embers of hope when she drove it home. With 10 minutes left, the Atlas Lionesses strung all their techniques together in hopes of finding the equalizer which could possibly force the game into extra time, but it proved futile.

Nine minutes of added time was played but Morocco, despite their stellar efforts in the competition had to settle for silver. South Africa swept the competition clean, winning all six of their games in style.

“Pinch me and tell me this isn’t a dream,” Seoposenwe told Super Sports. “This was our goal from the beginning of the tournament and I want to thank our coach, the technical team, and all South Africans who have shown us immense support from the beginning. We appreciate you”

For the captain, Refiloe Jane, lifting the trophy was an emotional turmoil. “When I lifted the trophy, all I could think back to was how long it has been since we began our quest to lift this trophy,”she told Super Sports. “We have tried several times and I am glad we have finally achieved our goal.”

For Ellis, it was all smiles for her having just won the CAF Women’s Coach of the year a record third time. She tried to win this tournament over two decades ago in 2000 against Nigeria as a player but had to console herself with silver at the time. As a coach, she qualified Banyana Banyana to the finals during the 2018 WAFCON in Accra and lost again to her longtime nemesis, Nigeria. With all to play for in this final, she finally brought a dream, which has long been nursed by Banyana Banyana for decades, and turned into reality. She did it in front of a vociferous and fully-packed Prince Moulay Abdellah Stadium on North African soil.  This was after previous attempts in 1995, 2000, 2008, 2012 and 2018.