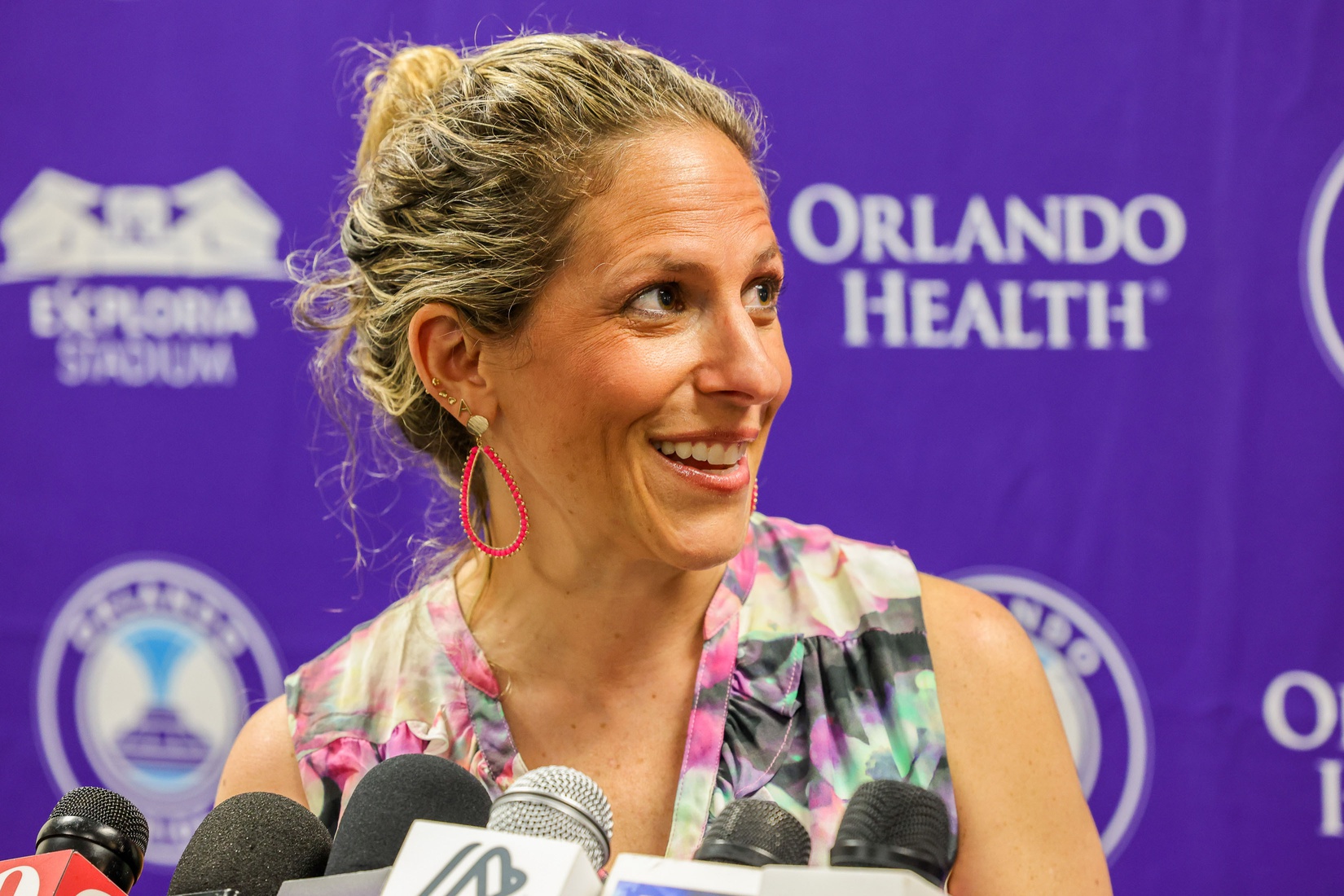 National Women’s Soccer League commissioner Jessica Berman held a media availability on Thursday and touched on a variety of topics impacting the league today and into the future. With constant references to being on a “listening tour,” Berman is clearly spending the early months of her tenure familiarizing herself with the NWSL’s inner workings and establishing relationships with partners current and future.  Here are some key bullet points from the session with my own thoughts included as well.

Berman: “We want to begin to be responsive to what we know has been a historical challenge for us at the league. Based on the data and everything I have learned over the last two and a half months, it’s clear that instituting and implementing VAR is probably the single most important thing that we could do to improve the consistency and the quality of the officiating. So we have the support from our Board to do whatever is necessary to make that happen. We’ve been doing due diligence on that for the last nine months and we felt at the Board meeting that we’ve done enough research and scoping that we’re prepared to make the commitment.”

The commitment appears to be enough to have VAR implemented at all NWSL venues in time for the 2023 season. Berman added that one-off venues like Daytona International Speedway would also need to be outfitted with VAR technology in order to get on the schedule.

Lauletta: My thoughts on VAR are long on the record and not the most popular. There will clearly be times when an obvious call is overturned, and everyone will take a deep breath and thank their lucky stars for the opportunity to have had the play reviewed. There will also be dramatic moments tempered by the VAR review and the inevitable controversy over its use and some of the decisions.

All that said, the investment to make it happen will not be small and it’s always a good sign for a sports league to see clubs investing rather than pulling back. And having VAR will help bring NWSL closer to being in line with the top soccer leagues on the planet.

Berman: “What’s fair to say is we’ve already had many internal meetings and we’ve had discussions at the board level from a planning and processing standpoint how we will approach the next season’s schedule and the areas we know we need to see improvement.”

Berman did not want to comment on particulars but did say the process is underway and that: “We’re ahead of schedule in terms of plotting out the schedule footprint and we hope to be able to share where we’re heading in the not too distant future.”

The league has come under fire recently not only for playing through the Concacaf W Championship and a slew of other international tournaments, but for scheduling the league’s two premier rivalry fixtures last weekend while so many regular players were away from their clubs. Berman did not go into specifics but did acknowledge that she has identified the schedule as one of the league’s “pain points” and that she has solicited many ideas about its future.

The NWSL Championship was also addressed. The Athletic reported that Berman’s appearance at Audi Field this weekend will be to announce the Washington D.C. venue as the site of this year’s title match. If the announcement does come Saturday it will be 105 days until the game. Berman said in a more ideal world she would be talking about the 2023 or 2024 final by now.

“As the league grows into a more established and less of a challenger type property status, we’ll hopefully be able to do that. My hope is that in this offseason we’ll be able to put together some longer-term business planning so we can get ahead of things like this.”

Lauletta: The schedule is tricky during tournaments like Concacaf W or even the World Cup. But with year-round housing now locked in as a collectively-bargained right, expanding the schedule footprint should be more feasible than ever. I do believe that having Reign-Thorns and Angel City-Wave last weekend was a tactical blunder that could have been avoided, but schedule makers have a very difficult task. The Challenge Cup/regular season overlap debacle aside, NWSL scheduling has come a long way from the league’s infant days.

As for the final, the only way to turn the week into anything close to the event we all want it to be is to plan it earlier and promote it better. Venue availability is an issue but a golden opportunity lies ahead when the Kansas City Current venue opens.

Berman: “It is a very wide range in terms of who could think that they are qualified. We have everything from administrators, to icons in the industry who may not have direct experience on the administrative side, to coaches and former players. Part of the interview process is to crystallize for us what is the most important quality for us. I would say for me personally, I want for this person to be someone who could be my personal advisor and coach on the women’s soccer landscape given that I don’t come from this world. Someone who can really help elevate the credibility of the league in the women’s soccer landscape.”

Berman did not give a timeline for when the first NWSL sporting director would be hired.

Lauletta: This has long been a void around the league office. The current setup feels like the reverse of WUSA when Tony DiCicco was commissioner and had the soccer elements in lockstep, but the business model fell flat. Hopefully a sporting director will get out in front of matters involving soccer, which sometimes gets more overlooked than it should. Especially since the NWSL is, after all, a soccer league.

On a partnership with Liga MX Femenil

Berman: “We’re definitely excited and we have had some very preliminary, introductory conversations at least at the enterprise and league level since I’ve been here. We’re excited to explore that given the connectivity and our proximity geographically. More broadly, I would say we are starting to be ready to start to tackle the international landscape and I appreciate all the individuals and organizations who have reached out to say, ‘hey we’d love to partner, we’d love to talk when you’re ready.’ I’ve really been intentional about my process of both the listening tour as well as strategically planning how we’re approaching the international landscape.”

Berman then deferred to the as-yet-unhired sporting director who she said would be vital in figuring out the best paths forward on international partnerships. The commissioner will be in London later this month for the end of the EUROs and said she is looking forward to connecting with some of the global power brokers in the women’s game.

Lauletta: International partnerships are great so long as things at home are kept neat and tidy. Major League Soccer has had years of fits and starts trying to build a formal relationship with Mexico, the latest iteration being the Leagues Cup. Would NWSL be better served trying to latch on there or go it alone? Early returns suggest the ICC and Women’s Cup have done a good job of promoting NWSL and its clubs.

Berman: “We’ve started conversations with CBS about planning for next season. A lot of those conversations are interwoven with out future media rights cycle [the CBS deal expires after 2023; the international agreement with Twitch after 2022].  CBS is extremely committed and interested in supporting the league’s growth. And certainly we all know that the tailwinds going in and coming out of the World Cup are going to be a massive opportunity for all of us, including all of our partners. We are definitely intentionally leaning into that with CBS.”

She added that there will be camera enhancements starting next month and that it was evident that the quality of the league’s broadcasts warranted immediate response.

“I believe that you’ll be able to see those changes for month of August through the second half of the season.”

Lauletta: Due to my position as part of the broadcast team for both Paramount+ (CBS) and Twitch, I do not opine on the NWSL’s broadcasts or broadcast rights.

On status of James Clarkson, Amanda Cromwell, and Sam Greene

Berman: “Those investigations are still underway. It is our hope to conclude those in the not-too-distant future, particularly give the interim steps that we took and that the teams took to protect the process of the investigation[s]. So they are a priority to resolve on a faster time line than the rest of the investigation. I do think it’d important to remember that it was within the broader context of the overall joint investigation that is also underway. We’re doing our best to sort through, in partnership with our Players Association and our joint outside counsel how to navigate those two parallel processes.

Lauletta: This was always going to be a stonewall answer as there are legal limits to what the commissioner can say here. The league is in a tough spot here because they’re damned if they do and damned if they don’t. No one is arguing for a return to a system that allowed a predator to coach in the league for several years, but this seems to be an overcorrection. Somewhere there has to be a reasonable middle ground.

On returning to an office setting and moving to New York

Berman: “That’s probably the thing I’m most excited about. Actually, this morning we met with architects from the facility. Some of the priorities that we’re hoping to effectuate by having a headquarters is to build confidence in the professionalization of this league. While a lot more can get done remotely, I think having a brick-and-mortar space where we can host partners and investors, is commensurate with the respect that we want people to have for the league and our players. To be in the city where all of the other sports leagues are based and housed, I think is very important. I would say more on the qualitative side, I think it’s really important that people have in-person time for informal collaboration. I think a lot has been lost in the last few years. I’m the first to appreciate flexibility and time to be able to manage my own personal life and save time on commuting, but the benefits of being able to pop your head into someone’s office or pull people into a meeting – all of those things are just not happening anymore. I believe in order for the league to maximize and achieve its potential we need to be in position to be able to facilitate those kinds of conversations and collaborations and to build the kind of culture that I want us to have at the league office.”

Lauletta:  Couldn’t have said it better myself!

Expansion and other notes

Berman said a decision on expansion teams for 2024—there are expected to be two teams—should come “in the coming months.” She added the usual platitudes about finding the right owners, in the right markets, with the righ business and stadium plan. She also hinted that states’ positions on reproductive rights could have an impact on which cities are chosen. Berman furthered that narrative by saying the league is pondering what proactive steps to take in existing markets in places where the politics do not align with the league’s vision.

Other notes were about reviewing league policies across the board. Two that were mentioned specifically were the implementation of a homegrown rule and policy on transgender athletes.

‘The team isn’t going anywhere’: How the Orlando Pride hope to finally get it right
NWSL Results: Goalkeepers shine in Wave-Racing draw