As Zambia nears historic first World Cup, its star is absent amid uncertainty 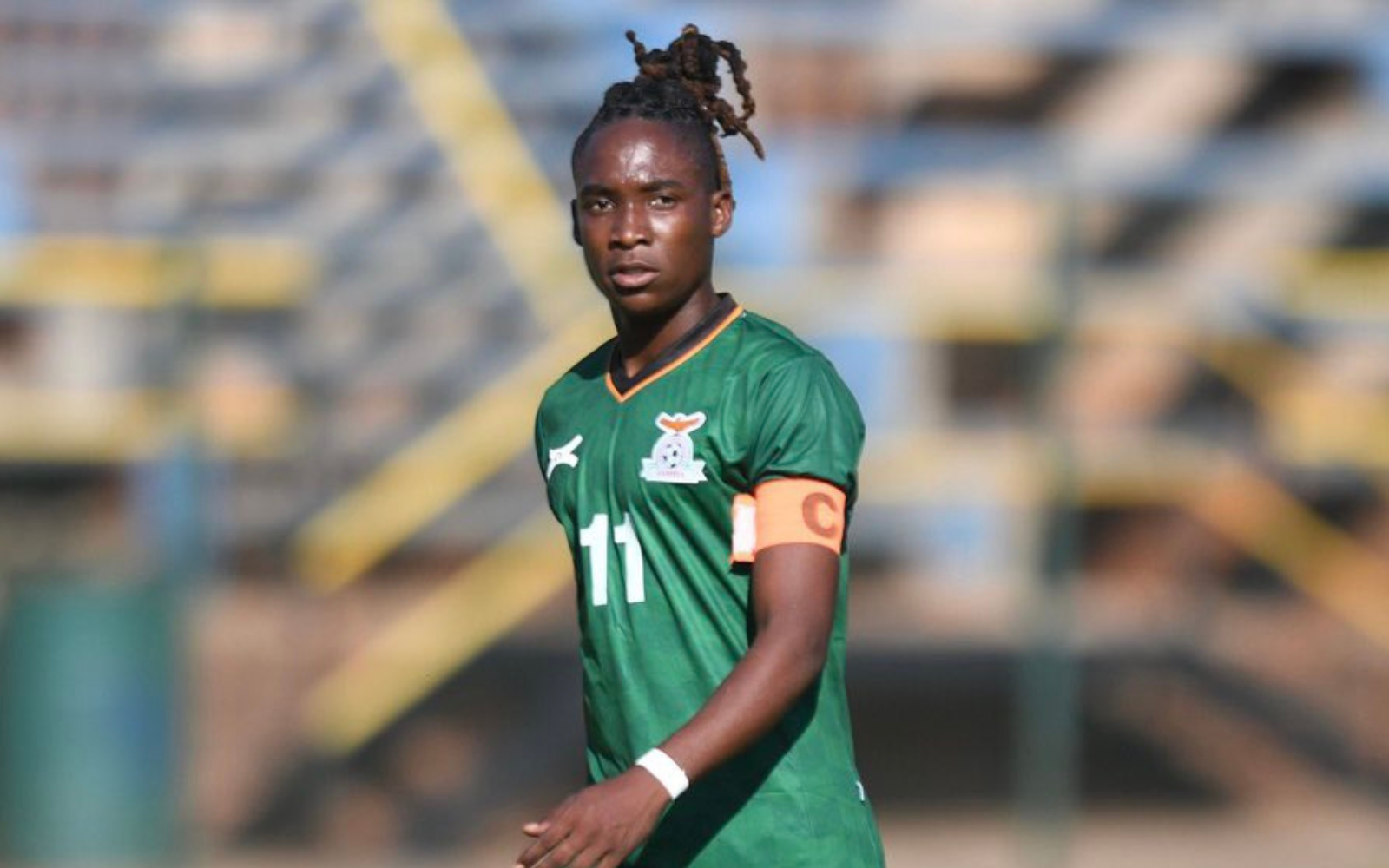 Gender eligibility issues have been a topic of discussion amongst sports fraternities and federations globally for decades. While officials of sports governing bodies ponder on effective ways to implement this policy in women’s sports, a number of women athletes have been scarred and sidelined from participating in the sport they love due to gender eligibility issues.

In Africa, the case of gender eligibility issues have eroded the excitement in one the greatest football tournaments for women on the continent, the Women’s Africa Cup of Nations (WACON). History has repeated itself once again and, just like how Anonman Genoveva was subjected to an inhumane gender eligibility test 12 years ago, Barbra Banda is also going through a similar predicament. Only, this time, she hasn’t been allowed to play in the tournament for two consecutive times since 2018.

The Zambian star inked her name in global women’s football during the Tokyo Olympics last year, becoming the first woman to ever score back-to-back hat tricks at the Games. She did so against China and 2019 World Cup runners-up, the Netherlands.

But Banda is not with Zambia at WACON, which doubles as World Cup qualifying. Zambia rallied without her to qualify for the quarterfinals, putting the team within one victory of its first Women’s World Cup. A victory over Senegal on Wednesday would seal Zambia’s place in the World Cup next year. Even the loser will get a second chance via a playoff.

Yet, questions loom in the absence of the continent’s most talented star. How was Banda allowed to play in the Olympics, a FIFA-sanctioned international event, yet prevented from playing in the WACON with her team?

A day before the tournament, the Zambian Football Association (FAZ) announced Banda’s absence from the team over “medical reasons.” The reason for her absence seemed suspicious and raised concerns over what really transpired.

Per FIFA rules, national teams have to submit the gender eligibility exam of their athletes. This must be done by their respective medical doctors. This, per FIFA’s rules, is meant to serve as evidence should a team blame another team for harboring a male in their team.

Andrew Kamanga, president of the Zambian FA, told the BBC they submitted all the gender eligibility test results of the team to CAF. However, Banda did not pass this test.

Speaking to BBC’s Osasu Obayiwuma anonymously, a CAF online official said Zambia did not submit the name of Banda for selection, nor did they acknowledge to CAF that she was unable to pass the gender eligibility test. “Osasu, everyone is criticizing us for Banda,” the official said. “But I have one question: did [Zambia] submit her name as a member of Team Zambia for the WACON? They never did, at any time. So, how can we talk about a player that was never put forward for registration or registered?”

Hours later, the Zambian Football Federation released an official press release describing CAF’s denial as “gross” and “unfortunate,” Kamanga officially stated in a press release that the team conformed to every requirement set by CAF for the gender testing and did not understand why they blatantly denied rules set by themselves.

Speaking with BBC’s Obayiwuma for the Zambian Football Association, Kamanga further stated that he asked CAF’s secretary general Veron Mosengo-Omba to allow Banda participate but his efforts proved futile. He described the moment as a “deafening silence” amongst the CAF officials.

Sydney Mungala, communications director of the Zambian Football Association told ESPN that Babrbara was offered the option to take hormonal suppression medications but she refused. Three other unfamed Zambian players failed the test as well and like Banda, refused the medication.

It is not the first time CAF’s gender eligibility test has raised questions among federations on the continent. In 2010, Equatorial Guinea star Genoveva Anonman was stripped naked in front of CAF officials to prove her gender. This was exactly a year after FIFA officially released its regulations on gender eligibility issues. FIFA’s rules deal completely with evidence. The opposing team must have feasible evidence that the accused is not female else their complaints will be inadmissible on FIFA’s disciplinary board.

The Connection between Anonman and Banda

History has a funny way of repeating itself with time. In the case of Anonman, she was accused by rival teams like Nigeria and Ghana for being a man. FIFA’s rules require each team to conduct its own independent testing by their national team doctors. These results will serve as proof should teams accuse a team of harboring a male in their team. Zambia’s FA describes FIFA’s rules as less “stringent” compared to that of CAF’s because it is primarily evidence-based.

When the pre-tournament tests were carried out, the Zambian FA probably wanted to prevent an issue similar to Anonman’s case, where rival teams might point fingers questioning Banda’s gender. Again, they had no option but to be transparent with CAF because should the FIFA rules, however long and tedious be applied, the player as well as the FA might face dire sanctions. That, at least, appears to be the ZFA’s line of thinking.

Based on this notion, Kamanga had to make this public because he saw it as unfair and discriminatory. And with Banda’s global prominence, he knew questions would definitely be asked on why she was absent. Banda was in the call-up for the Copper Queens’ squad but on July 1, she was ruled out of the tournament for “medical reasons.”

According to Ghanaian international and Gotham FC midfielder Jennifer Cudjoe, Banda’s case is unfortunate and she hopes for a better condition for her.

“I think there is a big agenda in Morocco,” Cudjoe tells The Equalizer. “We saw this gender testing happen  to the Ghanaian U-17 team during their World Cup qualifiers [in May 2022].”

A close source amongst the Ghanaian Women’s Football officials who decided to speak on anonymity exclusively told The Equalizer that, during qualifiers, teams are not mandated to go through gender testing, hence there was a violation.

African women footballers live under a constant threat which hinders them from showing off their skills. This has made women uncomfortable in the African football setting in which they play. Banda plays for Shanghai FC in China – and is the subject of major transfer rumors – and she has never been accused of being male. Her suspected transfer to Real Madrid is now reportedly in doubt because of questions about her gender.

The International Olympics Committee (IOC) and the International Association of Athletics Federation (IAAF) have been stern with hormonal testing over the years. Per the IAAF rules, an athlete can’t cross the 5 nmol/L testosterone limit. This has affected athletes like Castor Semanya, Francine Niyonsaba and Dutee Chand. Semanya and Chand have challenged the rulings of the IAAF through a litany of court appeals over the years.

Recently, Namibian track and field stars Christine Mboma and Beatrice Masilingi were banned from participating in the Women’s 400m race at the Tokyo Olympics. However, a testosterone study in 2017, proved that testosterone levels do not influence women athletes in many events except in 400m, 800m, 1-mile, hammer and pole vault . This doesn’t affect soccer and other events and that explains why Canada’s Quinn, a transgender and non binary footballer, played in the Olympics.

Banda, who has been sidelined in the competition, still rallies her support behind her team. Her No. 11 jersey has been handed to Siomela Mapepa. Zambia began their Africa Cup of Nations and World Cup qualifiers on a stale note after a scoreless draw with Cameroon. However, Avell Chitundu’s strike in the 92nd minute against Tunisia fired their hopes up. They have rallied to within touching distance of their first World Cup berth without their star. Qualification for the big stage would beg further questions about whether Banda would be eligible for the World Cup.

According to BBC’s Obayiuwana, FIFA is preparing a verdict on Barbara Banda’s issue. Originally, there was talk of a resolution taking place during the tournament, but as of this writing there is none. The BBC’s source claimed that FIFA has issues with CAF’s gender verification document and described it as “discriminatory and at variance with FIFA’s gender verification regulations.” FIFA is reportedly prepared to sanction the CAF official who permitted the use of the document.