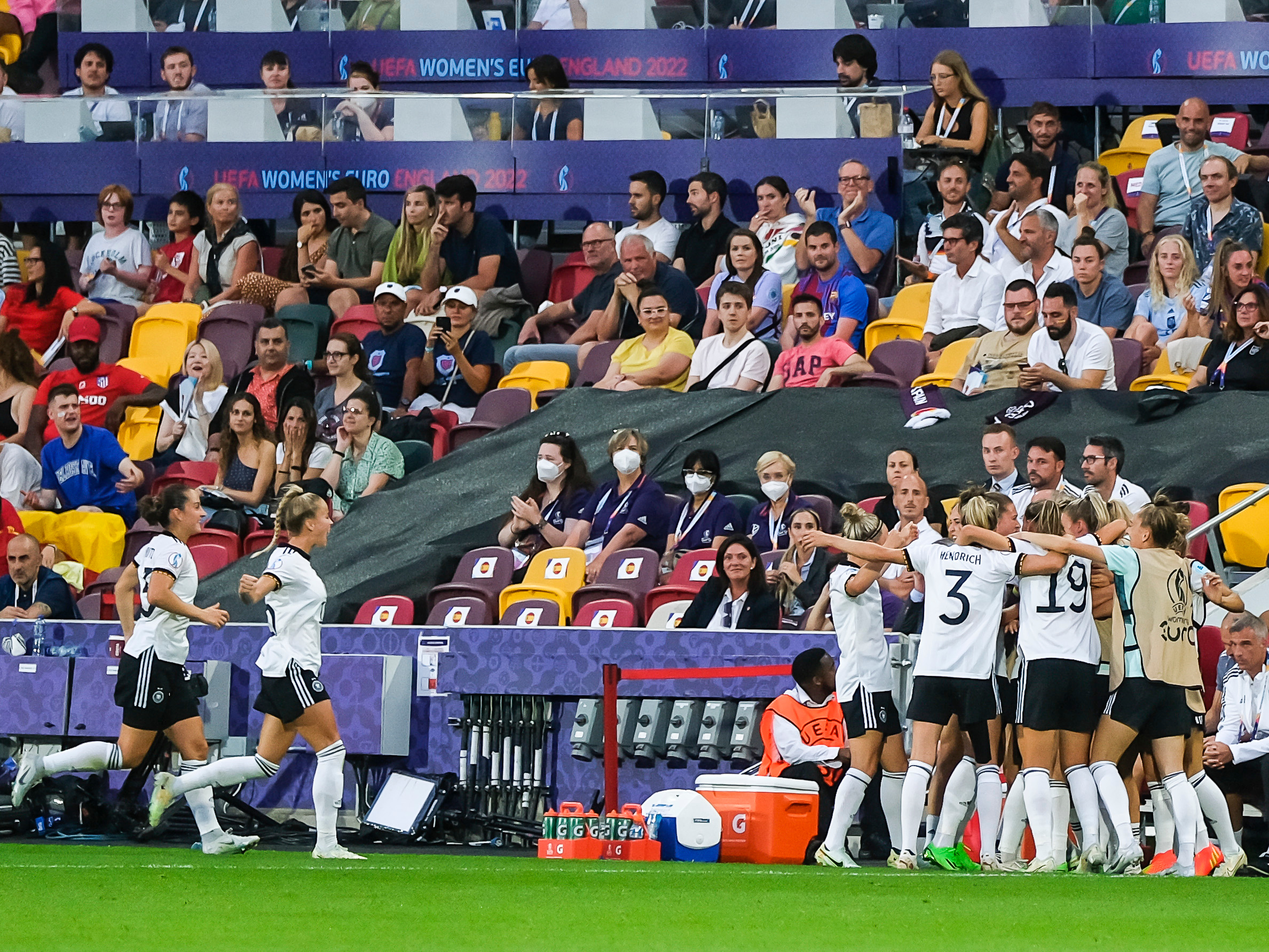 This match got off to a terrific start for the Germans but an absolutely horrendous one for Spain. It took less than five minutes for Germany to get themselves on the board through Klara Bühl when Spain simply were far too casual playing out of the back and Sandra Paños’ attempted pass out of the box was intercepted by Bühl and easily finished. This was Germany’s plan though and it worked. They wanted to press early and play physically to make Spain uncomfortable, not giving them the time and space on the ball to play their typical style.

Spain did react positively to going down early, they played well and created chances to equalize, including a 1v1 breakaway 10′ that Lucía García failed to convert. On the other hand, Germany converted their only two chances of the first half. The second came 36′ when veteran Alex Popp rose highest on a corner kick and headed the ball into the back of the net.

Spain didn’t give up but they also didn’t look particularly dangerous. Their speed of play was too slow to trouble the Germans much and the creativity was lacking despite the brilliant players they have. Their best chance came 71′ when Mariona Caldentey forced a brilliant save out of Merle Frohms, but still, Spain simply could not score.

Neither of these teams are known for scoring a ton of goals, in fact, they are known for their defense and ability to stifle their opponent’s offense. This was clear in the way the match was played as neither team really wanted to open the game up, Finland in particular was all defense all the time. Denmark created far more chances than the Fins, controlling more of the possession and tempo, as their opponents were content to sit low defensively.

The breakthrough finally came 72′ when who else but Danish superstar Pernille Harder was able to head a loose ball over the line before the Finland defense could react after her teammate had her headed attempt ricochet off the crossbar. The emotion from Denmark after scoring was palpable as either team needed to win to have any hope of advancing out of the group stages ahead of Spain. There is some worry for Denmark as their star player had to leave the game after a rough collision and could be seen holding ice on her head. Denmark will hope Harder is alright as she is undeniably crucial to them.

As the game waned into the dying minutes Finland made their final push for a goal, and they came quite close, but the young Danish keeper Lene Christensen made a brilliant save to preserve her side’s lead, and in the end the huge three points. Group B is now a race between Spain and Denmark to earn that second place spot.

Ugly wins and ugly losses: USWNT moves on as Mexico is left in misery
As Zambia nears historic first World Cup, its star is absent amid uncertainty