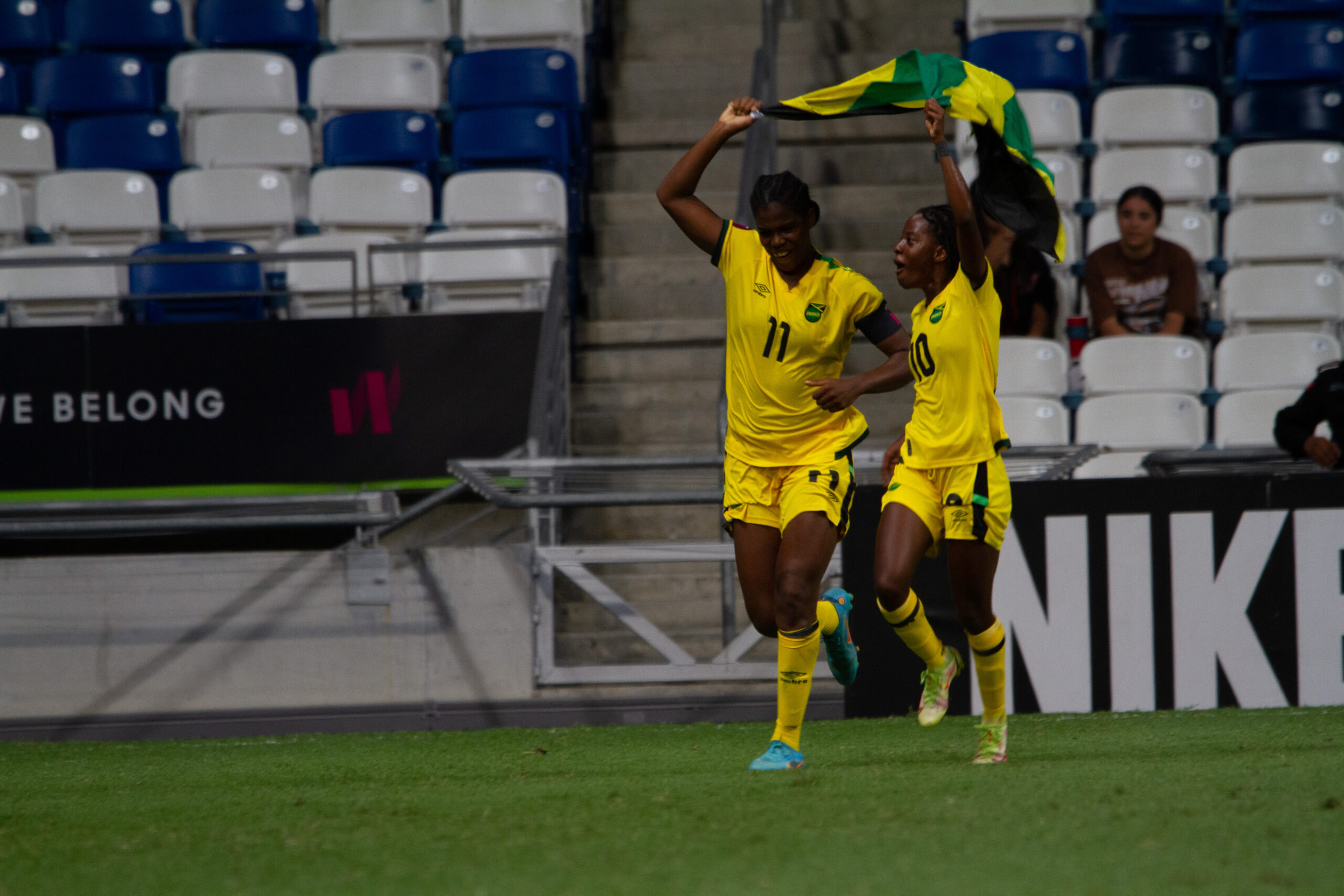 Monday night contained the final matches of the group stages of the Concacaf Women’s Championship. Canada finished first in Group B with a win over Costa Rica, who finished second – both are World Cup bound. Panama’s defeat over Trinidad & Tobago sent them to the global playoff. Jamaica stunned Haiti and secured their second ever World Cup qualification.

On Monday night, as Jamaica and Haiti prepared to face off for the final guaranteed World Cup spot of the Concacaf tournament, both countries arrived with decent chances. Jamaica, who beat Mexico 1-0 and lost to the U.S. 0-5 in the tournament, needed a win. Haiti, who beat Mexico 3-0 and lost to the U.S. 0-3, needed either a win or a draw. And all eyes were on the biggest game changers – Khadija “Bunny” Shaw for Jamaica and Melchie Dumornay for Haiti – as the performances of those two jack-of-all-trades players would likely make all the difference on the pitch.

Turns out, it would be Bunny Shaw’s night to call her own. The intense first half ended with Jamaica up by one goal, an opposite-post shot by Trudi Carter, and Haiti came out hungry and aggressive to start the second 45. But it was Shaw, not Dumornay, who jumped first to capitalize on scoring opportunities, sending a shot from outside the box into the back left corner of the goal in the 58th minute. After a handball was called on Haiti in the 70th minute, Shaw made it 3-0 for her country and earned hero status.

The final goal of the game came off the head of Jamaica’s Drew Spence in the 79th minute, and the Reggae Girlz went on to finish the game 4-0, securing their spot in the 2023 World Cup. Oddly enough, they almost – unintentionally – also helped lift Mexico to the international playoff game, a game that Mexico had a microscopic chance of qualifying for after their terrible Concacaf run. Mexico needed to not only win but also, somehow, conjure up a four-goal differential. Remarkably, Jamaica came through with the differential, but unfortunately, Mexico couldn’t secure the win; the magical storyline almost came true. Jamaica’s next stop will be a semifinal match against Canada on Thursday, July 14.

The reigning World Cup champions rolled out in an odd lineup to start this one, clearly wanting to rest some of their starters who had played significant minutes in the previous games, but this just contributed to how disjointed the team looked. The United States had several chances in the first half, the best coming in the 14th minute when Midge Purce had her shot ricochet off the inside of the post, but most were wasted. The finishing and buildup we expect from one of the top teams in the world was simply not there.

Meanwhile, the Mexico we had all been expecting this tournament finally showed up, but far too little too late. Oddly enough, the home side seemed to play their best after a red card in the 73rd minute ended the night for Jacquie Ovalle, who had only been subbed on a few minutes earlier. Her challenge on Rose Lavelle had initially gone unpunished but when VAR prompted a review it was clear the challenge deserved a red. This did seem to light a fire under Mexico, who until this point had managed to keep things completely scoreless.

As the teams trudged into the last 10 minutes of regular time both seemed to decide it was their time to push. Mexico created a couple of quality chances but weren’t aggressive enough in their attack to convert. The breakthrough would finally come in the last minute of regulation when Kristie Mewis forced the ball over the line off the goalkeeper’s save. However, the initial header that the save was made on came from Emily Sonnett, who upon replay, appeared to be offside but evidently VAR did not have a clear enough angle to suggest a clear and obvious error so the goal stood, luckily for the US. They didn’t necessarily deserve a win based on the performance but they also didn’t need one, having already qualified for the World Cup and securing advancement to the knockout stage. They will take on Costa Rica on Thursday for the right to play in the final.

Canada impress, but don’t stun, in victory over Costa Rica

Entering Monday night’s match, both Canada and Costa Rica had already qualified for the World Cup. The match still held significance, however; the winner of the match would go on to top Group B, likely face an easier opponent in the semi-finals, and potentially reach the Concacaf W final match, the winner of which gets an automatic spot at the 2024 Olympics. Needless to say, this match mattered.

Though Canada opened the scoring with a goal from Jessie Fleming in the 5th minute, it failed to capitalize on other chances near the goal, and by halftime, the game still appeared like it could go either way. But in the second half, Canada was able to bump their lead up to 2-0 with a goal from Sophie Schmidt in the 69th minute, and that score would remain true to the end, and Canada were crowned the winners of Group B in Concacaf group stage matches.

Canada did what it had to do to win, but their performance on Monday was sufficient, not inspiring. Though Costa Rica made a formidable opponent, Canada overall was not thoroughly challenged in the group stage of the Concacaf tournament, and sometimes, when a team lacks a challenge, they also lack spirit. Expect Canada to turn up the energy in the knockout round, or else their days in this tournament may be numbered.

Panama advance to inter-continental playoff with win over Trinidad & Tobago

Monday night’s match between Panama and Trinidad & Tobago was a race to see which country would qualify for the inter-continental playoffs. As neither team performed well enough in the group stage matches to qualify to the World Cup, earning the wildcard playoff spot would be both teams’ only chance at making it to Australia and New Zealand in 2024. Panama had the edge going into the game, needing either a win or a tie with Trinidad & Tobago, while Trinidad & Tobago would need to win in order to advance.

From the start, it was Panama’s game to win. While Panama didn’t necessarily dominate the game in the first half – Trinidad & Tobago had 51% possession – the Central American team looked controlled and measured, and established a 1-0 lead with a goal from Marta Cox right before halftime. The second half was all Panama. As Trinidad & Tobago started to run out of steam, all Panama needed to do was keep up the calm and control they exerted in the first half, and ultimately, that was enough to come up with the win. Panama will now advance to the inter-continental playoffs in February 2023 and hope to punch their first ticket to a World Cup.