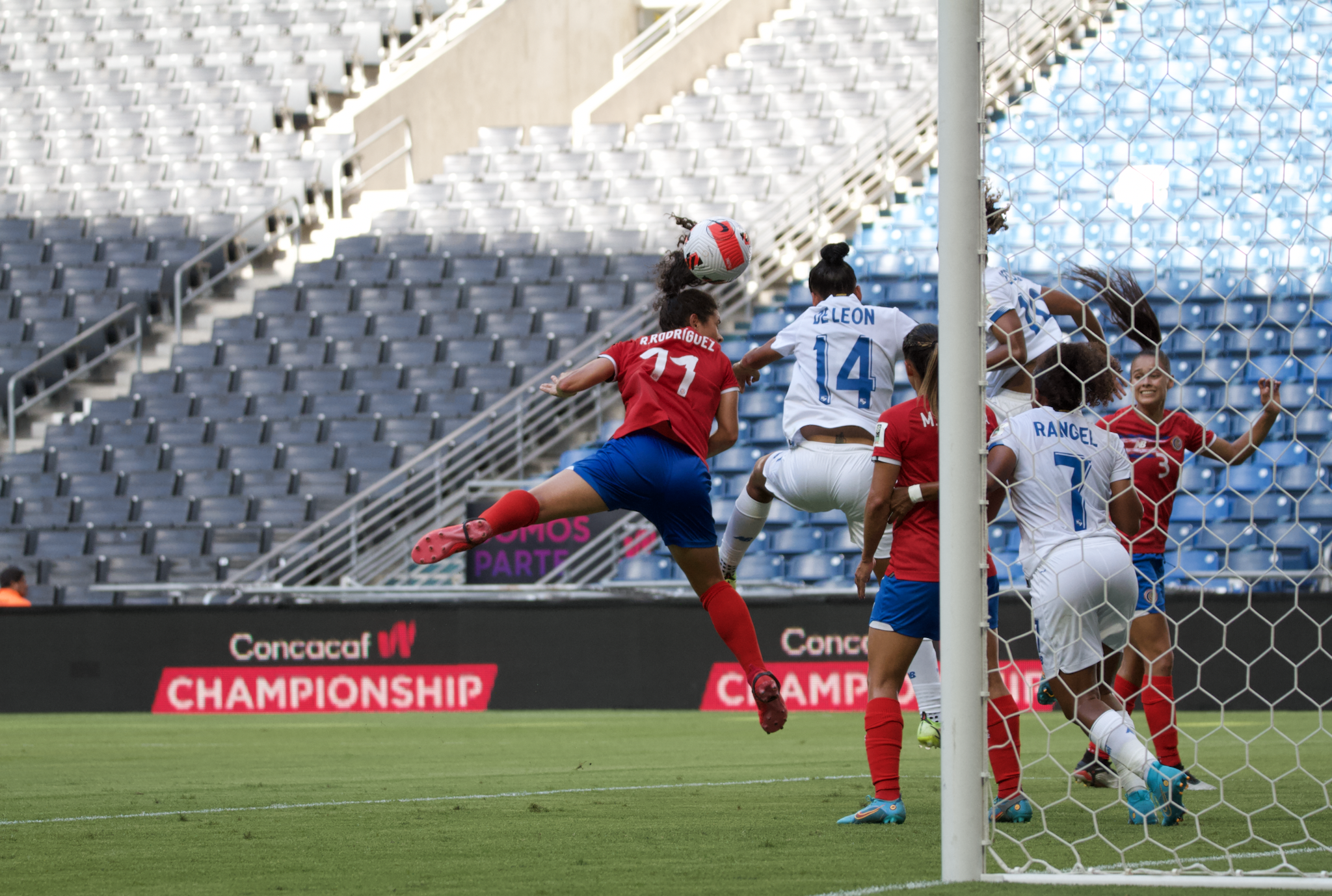 The Concacaf W Championship continued on Tuesday night, with Group B taking center stage for their first of three group stage matches. Costa Rica earned a 3-0 victory over Panama, while Canada took on Trinidad and Tobago.

Canada secured a 6-nil win over Trinidad on Tuesday night.

Captain Christine Sinclair opened the scoring in the 27th minute with a header on a whipped-in cross by Ashley Lawrence. It was Sinclair’s 190th international goal in a welcome return to the pitch for the striker, who last played on June 8th due to injury.

But even though Canada created numerous chances throughout the rest of the first half, they frustratingly couldn’t find the back of the net. And in an uncharacteristic sight, Jessie Fleming missed a penalty kick, sending it high and over the crossbar.

Canada started slow in the second 45′, and after a stagnant fifteen minutes, it was clear that some changes were needed. Coach Bev Priestman made four substitutions at once at the hour mark, and just minutes later, the floodgates opened.

Midfielder Julia Grosso scored her first – and then second – ever goals for Canada in quick succession.

Jessie Fleming, Janine Beckie, and Jordyn Huitema added three more to round out the scoring.

The Ticas of Costa Rica defeated Panama by three goals to earn a major Group B victory, and three points on the standings, Tuesday night to open up the group’s play. Costa Rica and Panama have been fierce rivals for years, from the men’s game to the women’s game. The countries are right next to each other, and the soccer history is rich in both Central American nations.

Rodriguez scored the opening goal in the 6th minute, beating out Panama defender Carina Baltrip-Reyes and heading the ball past 21-year-old goalkeeper Yenith Bailey. In the 24th minute, María Paula Salas, the 19-year-old who plays for ChievoVerona in Italy, scored the second goal, at the top of the box, after the ball bobbled between Costa Rican players and Panama failed to clear it from their penalty area.

Katherine Alvarado scored the third and final goal in the second half, after María Paula Coto drew a penalty in the box from Panama defender Katherine Castillo in the 58th minute. A VAR check confirmed that Coto was fouled inside the box.

Alvarado sent the penalty toward the low left corner, and Bailey dove the right way, but the ball snuck under her arm.

Costa Rica held off any stave of Panama attack, namely from Lineth Cedeño and Marta Cox, who plays her club soccer in Mexico for Pachuca. Starting in goal for Costa Rica was Daniela Solera, who earned the nod over Noelia Bermúdez, who started in Costa Rica’s friendlies against Haiti — including the 4-2 loss to Haiti on June 28.

Costa Rica’s victory is a big one. With Canada as the undisputed favorite of the group — although, the Mexico loss to Jamaica proves that anything can happen in Concacaf — this could be Costa Rica’s ticket to one of the top two spots in Group B.

The top two teams in each group will earn an automatic bid to the 2023 FIFA Women’s World Cup, while the two third-place sides in each group will advance to an intercontinental playoff in February 2023 in New Zealand, with 10 total teams and three spots in the World Cup up for grabs.

Costa Rica will take on Trinidad and Tobago on July 7 at 7 p.m. ET. Meanwhile, Panama and Canada will face off the same night at 10 p.m. ET.