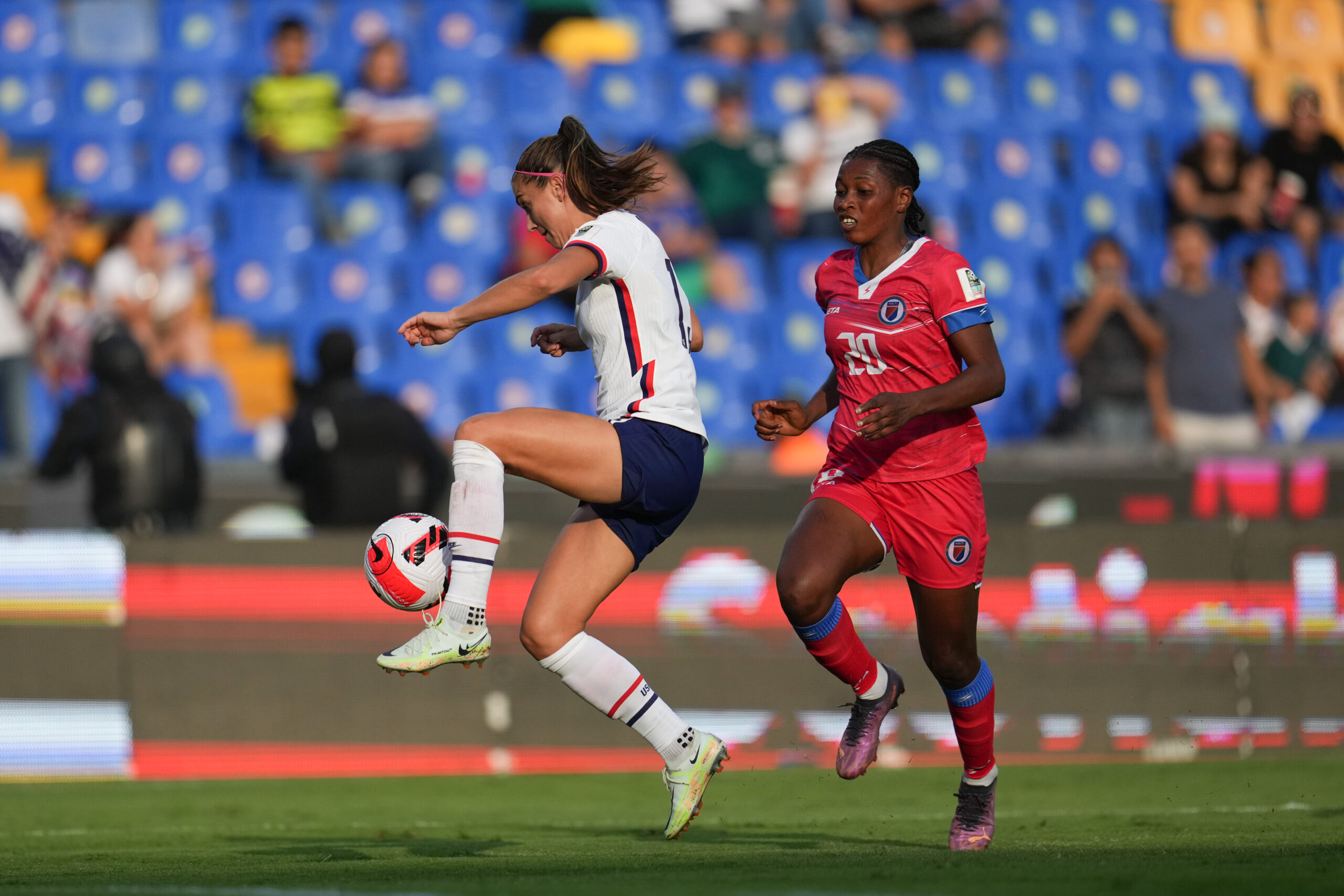 On Monday night, tournament play kicked off for the CONCACAF W Championship, with the United States taking home the first victory of the night over an improving Haiti.

On Monday night, the U.S. and Haiti opened group play in the Concacaf Women’s Championship, which is serving as a World Cup qualifier. The game was played in Monterrey, Mexico and slightly more was at stake than usual because the winner of each group not only clinches a ticket to the 2023 World Cup but also gains entry to the 2024 Olympics. Entering the game, the U.S. was the clear favorite, having defeated Haiti’s national team in each of their seven previous matchups.

But if the U.S, was looking for a cakewalk, this game would not be it. Haiti displayed aggressive offensive tactics and a formidable defense during the game’s first 15 minutes, while the U.S. struggled to make quick decisions up front and stumbled over routine functions on the back line. But in the 16th minute, Alex Morgan found the back of the net with her feet, and seven minutes later found it again with her head. The brace by the NWSL’s lead goal scorer this season, plus a penalty shot by Haiti’s Roselord Borgella that, luckily for the U.S., hit the post, sent the American women off the field at halftime with a 2-0 lead.

To some extent, the two first-half goals were overshadowed by the VAR-induced reversal of a red card handed to Borgella after she accidentally cleated U.S. full back Kelley O’Hara in the torso. The referee initially showed a red card but reduced it to a yellow after a VAR review determined there was no malicious intent on Borgella’s part. But the indent of spike marks on O’Hara’s rib cage was proof enough that, regardless of Borgella’s lack of maliciousness on the play, her kick was reckless and deserved a more serious punishment than a yellow.

The match’s second half included a handful of attempts from both sides, including a dangerous run down the left side by Melchie Dumornay, Haiti’s strongest, and most versatile player. The U.S. also had a potential penalty shot for Mallory Pugh and a goal for Alex Morgan both stamped out due to offside calls, the latter of which kept Morgan from a hat trick. Many fans, meanwhile, were excited to witness Megan Rapinoe enter the field in the 74th minute, and her dynamism was undeniable as she connected with Midge Purce 12 minutes later for the third and final goal for the U.S.

While the American women had a lot to be proud of after their opening performance of the tournament, the two things they will grapple with as they prepare for their next match are defensive strategy and player safety. The back line is normally the area of least concern for the women’s national team, but errors from U.S. defenders led to Borgella’s penalty kick and several breakaways by Dumornay throughout the evening. But while shaping up defensive strategy is an internal job, the team’s concerns about player safety can’t be solved at practice. The fact that the foul on O’Hara’s went under-punished, as did the one on Pugh (she was tripped from behind and fell on her face and no card was shown), makes one wonder how players will be protected as the tournament proceeds. If referees are disregarding dangerous tactics on the pitch, injuries among all the teams competing in the CONCACAF Women’s Championship will likely rack up.

In a head-turning result, the Mexican women’s national team, who are the hosts of this tournament, were stunned at El Volcán by Jamaica. The Reggae Girlz took three points, with the game-winning goal coming early in the first half.

The first 45 minutes saw a shocking lead obtained early by Jamaica, with Manchester City striker Khadija “Bunny” Shaw scoring in the 8th minute on a set piece play, heading the ball into the far corner of the net. Shaw, who is 6’0, got up and over her defender to head the ball down. The ball caught a friendly touch off the post and bounced in goal.

Jamaica had a chance to double their lead before halftime after a handball was called against Casandra Montero. However, Havana Solaun, who plays her club soccer for the North Carolina Courage, skied the ball over the crossbar and gave no threat to Mexican goalkeeper Emily Alvarado.

Mexico entered the locker room down by one goal in their home country, as they are the hosts of the Concacaf W Championship with matches being played at El Volcán and Estadio BBVA. Coming out for the second half, Jamaica had another key chance when Shaw chipped the ball over Alvarado on a breakaway, but the ball bounced off the post and away from goal.

Mexico, with the Solaun penalty miss and the post helping out, were given two big wake up calls. Mexico had some chances in the second half to equalize, but nothing could get past Jamaican goalkeeper Rebecca Spencer, who earned her sixth clean sheet in just her seventh appearance.

Mexico will need some sort of result against Haiti, who fell to the U.S. 3-0, and a lot to go their way to finish in the second place spot. The two sides will face off on Thursday, July 7, at 10 p.m. ET.

Genoveva Anonman’s legacy: A star who was stripped of her rights
Concacaf W Group A talking points: USWNT gets by, Mexico digs a hole, VAR confuses