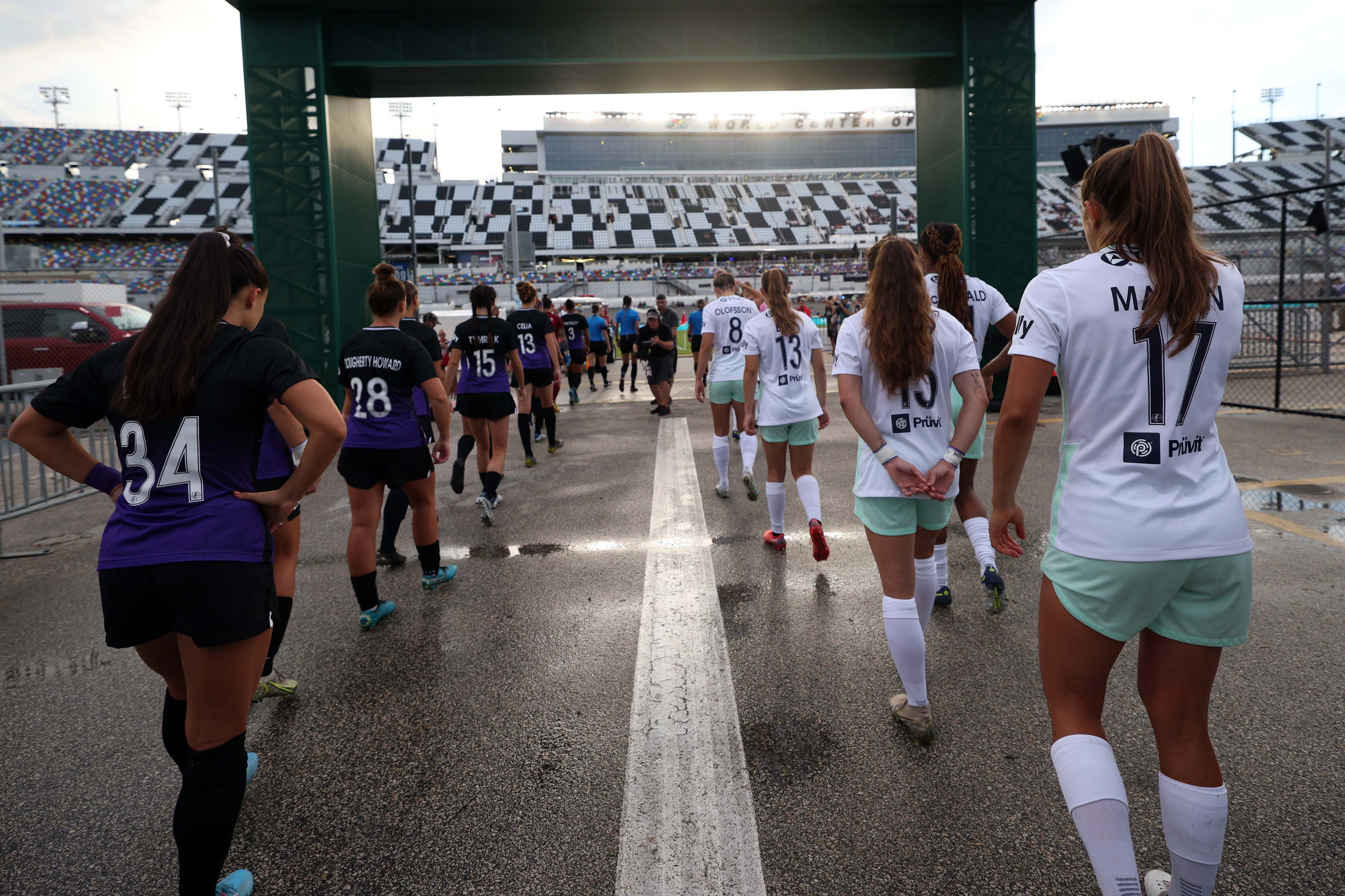 Two National Women’s Soccer League matches were played Sunday to round out a weekend of games, kicking off in San Diego and ending at Daytona Speedway.

The Skinny: Orlando rallied from 2-0 down to earn a point against Racing Louisville in the first professional soccer match played at Daytona Speedway. A temporary pitch, built in less than a week and an endeavor which organizers told The Equalizer cost $1 million, was built over pit row for a spectacle event. The match which followed was an entertaining one.

One Key Moment: Savannah DeMelo was everywhere again, as she has been all season for Racing Louisville, and she earned the free kick right on the 18-yard-line which she then buried into the top corner. It was nearly a mirror image of her rocket against league-leaders San Diego Wave FC, and on Sunday, the goal extended Louisville’s lead to 2-0 in the 50th minute. DeMelo, a rookie, is the only player in the NWSL to have scored directly off a free kick this NWSL regular season — and she’s now done it twice.

Inside the Game: Louisville’s press proved effective for large stretches and played a direct role in both goals for the visitors. Freja Olofsson forced the turnover that led to DeMelo’s dribble-drive on goal No. 2, and Emina Ekic’s goal in the 34th minute came after Racing recirculated and found space that the Pride had vacated.

Orlando’s introduction of substitutes Kerry Abello and Mikayla Cluff in the 58th minute instantly changed the game and gave the Pride a stronger presence in the middle of the park. Kylie Strom scored within a minute, curling a gorgeous shot to the back post. Darian Jenkins, now firmly the focal point of the attack as the No. 9 following the trade last week which sent Sydney Leroux to Angel City FC, assisted the first goal.

Jenkins scored the equalizer in the 69th minute. First, she checked back low and played a big switch to Celia to open up play on the right side. Celia drove at Louisville before finding Erika Tymrak, who then slipped the ball back to Jenkins for the finish.

The wonkiness of the game captured the inconsistencies of both teams. Louisville looks great and organized in stretches but struggles at times in the final third and allows pressure too often on its defensive unit. Orlando remains all over the map, yet again rallying for a 2-2 draw after trailing 2-0, as the Pride also did on May 27 against the Washington Spirit. In between that game and Sunday, Orlando suffered three shutout losses: 5-0, 1-0 and 6-0.

The Skinny: The Wave were the better side in this match, creating dangerous chances with their defensive pressure high up the field, and finishing those chances while severely limiting the Spirit.

One Key Moment: This opening goal was a beauty. Its a terrific team goal by San Diego from the backheel by Kelsey Turnbow to find the overlapping Christen Westphal, whose cross goes past the decoy runner straight to Makenzy Doniak for the thumping finish.

Inside the Game: San Diego’s defensive pressure was suffocating for Washington for most of the game. The Wave’s high pressure was continuously well organized, pushing up together as a team led by the forwards as the first line of defenders angling Washington’s attempted play out of the back towards more San Diego players who fought to disrupt passes, then win the second ball, and then counterattack. Washington even had a whopping 62% possession in that first half, but the possession was useless play along the backline instead of in attacking areas. Despite having such little possession, the Wave capitalized on their chances they created on the counter attack. What turned out to be the game winning goal was exactly that, Marlene Schimmer winning the ball and then Belle Briede with the finish.

Washington started to work out in the second half that if they switched the point of attack earlier there was a lot of open space left by San Diego’s very compact shape but it came too late to dig out of the hole they made in the first half. The Spirit would get a late consolation goal through Jordan Baggett, but overall did not create many quality chances.