Genoveva Anonman’s legacy: A star who was stripped of her rights 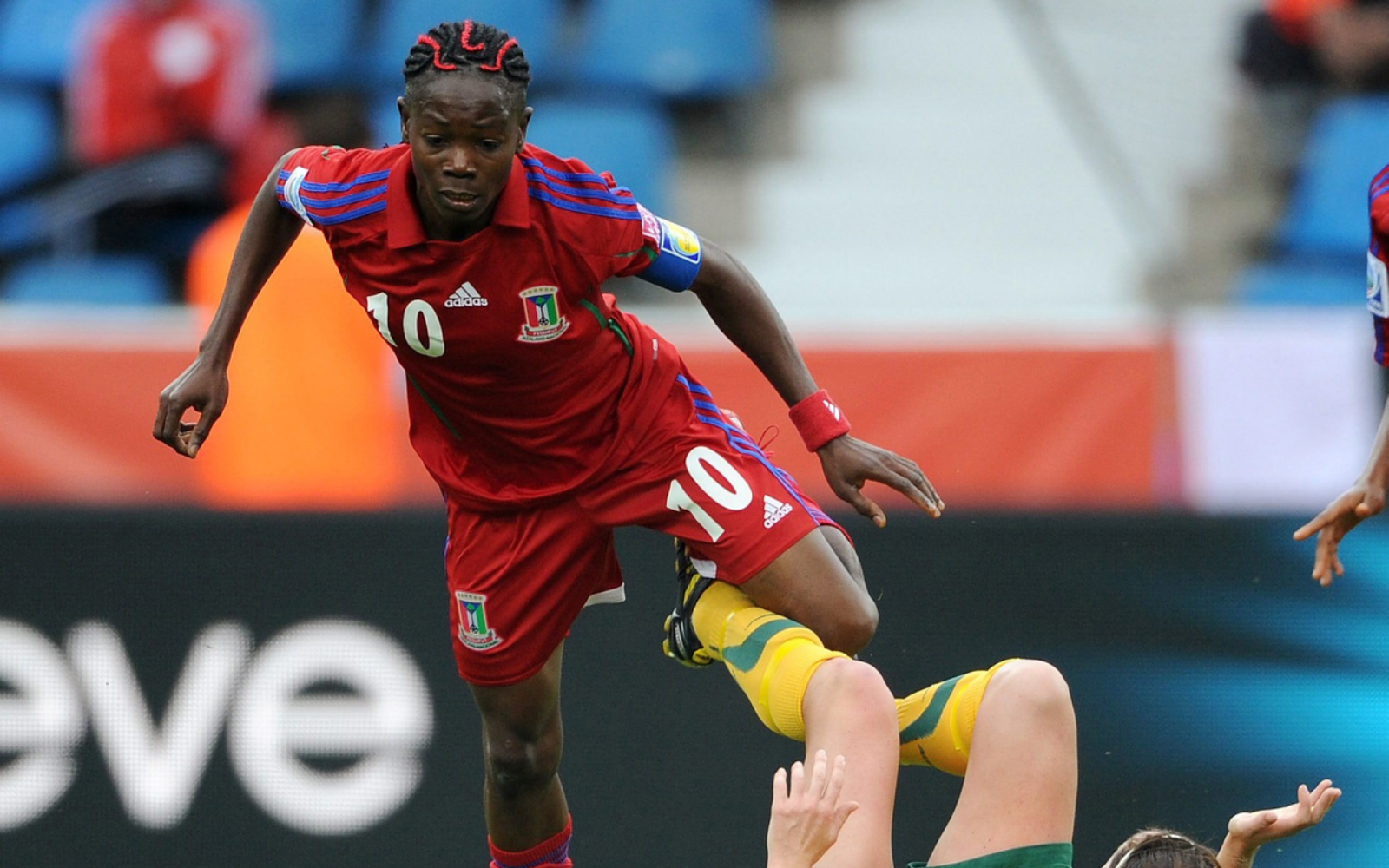 Accused of being a man in a woman’s game comes with a wave of trauma, coupled with a hunch of despondency. Ever since her feet touched the pitch during the 2006 Africa Women’s Cup of Nations (AWCON), Genoveva Anonman has been subjected to the coldest form of malfeasance.

Anoman is a native of Equatorial Guinea and was born in the southern town of Cogo. Little did she know that one day she would lead her country to its most unprecedented victory in football, and that she would shine as one of the surprise stars of the 2011 Women’s World Cup.

Nicknamed “Ayo,” Anonman started playing football when she was just five years old. Like many African girls in sports, her mother had different dreams for her. Her mother once painted on a canvas a picture of her daughter studying for a master’s degree, being a teacher who eventually helped kids. Her dad wasn’t present to have a say since he resided in a different city with another woman.

Anonman had different plans – plans that didn’t fit the paradigms and norms of African society. Going against parents’ wishes in the 1990s, especially, was unheard of where she grew up, but Anonman took her chances.

At home and in school, she was regarded as an outlier amongst her girl peers for loving football. The game was heavily regarded as a male sport and stereotypes against women who showed an ounce of interest in it were rife. For a young girl, her mental and emotional response to discrimination was admirable. This emotional guard of armor she steadily built over her childhood would come in handy when her football career began.

Her mother still wouldn’t budge for her daughter to pursue her football dreams. Anonman was later thrown out of her home because she has no place in her mother’s reveries. Broken and dejected, Anonman’s uncle extended a helping hand to her and took her in. Her uncle funded her schooling and allowed her to play football as well. In the capital city, Anonman was signed by the city’s club, Malabo Kings.

After three years with Malabo, South Africa’s Mamelodi Sundowns came knocking in 2006. During this time, Equatorial Guinea wheeled its way into the African Women’s Cup of Nations (AWCON) after beating Angola 5-4 in the first round of qualifying. They were to play Nigeria in the second round but after CAF awarded hosting rights to the six-time champions at the time, the game was called off. This gave Equatorial Guinea a direct qualification ticket. Anonman was on this historic team and she was only 17.

She scored her first goal in the AWCON against Algeria in a 3-3 draw in 2006. This was her cue to great notoriety in African women’s football. But the team couldn’t  get out of the group stages and finished third below Nigeria and South Africa.

Anonman’s stint with Sundowns ended in 2007 and her next chapter in football began in Central Europe, where she took center stage under the spotlight. She inked a contract with FC Jena in the German Bundesliga and finished as the team’s top scorer in two consecutive seasons.

From her stint in the 2006 AWCON, to FC Jena, a scandal that would taint her name was brewing underneath her flourishing career. Anonman was suspected of being a man because she was energetic, fast, and a very lethal striker. She found it offensive to be tagged as a fraud in the game she loved dearly.

In 2008, the 19-year-old led her team to clinch the most coveted trophy in African women’s football. They stunned the Nigerian powerhouse in the semifinal and walked over Banyana Banyana of South Africa to win the final at home in Malabo. Anonman scored the winning goal which broke the impeccable record of Nigeria’s winning streak in the AWCON. Anonman finished the tournament as the top scorer with six goals in five matches, and won player of the tournament.

In 2010, the young and vibrant squad almost won the continental title again but lost to Nigeria this time around, 4-2 in a dramatic final at the 15,000-seat capacity Sinoba Stadium in South Africa. This time, Anonman registered just a goal against Ghana and it was from a free kick.

After losing the final, the previous allegations leveled against Anonman resurfaced. This time Ghana, Nigeria, and South Africa filed a complaint to CAF, the continent’s governing body. They accused Equatorial Guinea of having at least two men in their squad, allegations which Anonman denied.

“I first heard these accusations back in 2006 and 2008… I have already been [gender] tested, which I find offensive,” she said at the time.

“These accusations come because I am fast and strong, but I know that I am definitely a woman.”

The coach of Nigeria alleged that Equatorial Guinea brought men to the competition in 2008 and 2010. Two other teammates of Anonman were also accused: the Simpore sisters, Salimata and Biliguisa.

Anonman said she was stripped naked in front of CAF officials to determine her gender, an experience she described as heart-wrenching and soul-dampening. FIFA introduced a detailed gender verification policy in 2011 detailing personnel entitled to make gender verification requests, and the process which would follow, including a documentation request.

If a medical officer deems it fit to carry out a further physical examination, an independent expert does this. CAF violated Anonman’s rights as a footballer and troubled her mental health with this repressive act.

“I was really upset, my morale was low and I was crying,” Anonman said in an interview recounting the demoralizing experience. “It was totally humiliating, but over time I have got over it.”

To date, she has not received an apology for the humiliation she had to endure.

FC Jena and the Equatoguinean Football Federation each defended their player, citing that these accusations were false without grounds.

The Simpore sisters were later dropped going into the 2011 World Cup in Germany. The reason for their exemption was never stated but Anonman still kept her place – and as captain. In Germany, she scored Equatorial Guinea’s only two goals at the World Cup, against Australia in Group D play. The Matildas took the lead after an emphatic finish from Leena Khamis but Anonman canceled the deficit with a fine finish in the 20th minute. Australia doubled their lead and just when they thought they had their defensive banks in check, Anonman reminded them of her supremacy. She calmly slotted the ball past goalkeeper Melissa Barbieri for another tally in the 82nd minute to make for a dramatic finish. Although Australia still won the game, and Equatorial Guinea failed to advance, Anonman made a global statement with her historic brace at the World Cup.

Anonman’s story in Germany was far from over after the World Cup. Her contract ended with FC Jena, where she scored 37 goals in 50 matches. Six-time Frauen-Bundesliga champions FFC Turbine Potsdam poached her, and she continued her fine form there as well and netted 60 goals in 79 matches.

In 2012, it was time for another African continental tournament. Anonman led her team to victory again, finishing with six goals again. That 2012 AWCON final was a repeat of the 2008 campaign. Again, Equatorial Guinea completely humbled their South African opponents. Once again, they hosted the tournament and won it. It was two in the bag for them after breaking the monopoly of the Super Falcons, who finished third that year.

Anonman was awarded the best African woman player of the year in 2012 by the same federation that stripped her of her integrity and honor. Her team, Equatorial Guinea, also won the team of the year in the 2012 Glo-CAF awards.

Anonman’s contract with Potsdam ended and she continued her illustrious career in the National Women’s Soccer League with the Portland Thorns in 2015 but the stint lasted less than a year. She has since played for Atletico Madrid, Maccabi, and a host of teams around the world including South Korea’s Suwon FC Women. Anonman currently plays for Rafelbunyol in the Spanish Primera Regional Championship.

Anonman is seen as a hero for continuing her career in football after being subjected to the crudest and unthinkable forms of abuse. Her only crime was loving football since the age of five, and one day she will have to unpack everything she has endured. From one of the smallest countries in Africa to scaling her way to the top of African women’s football, and the World Cup, Anonman is seen as a legend and a force, a true inspiration to generations to come.