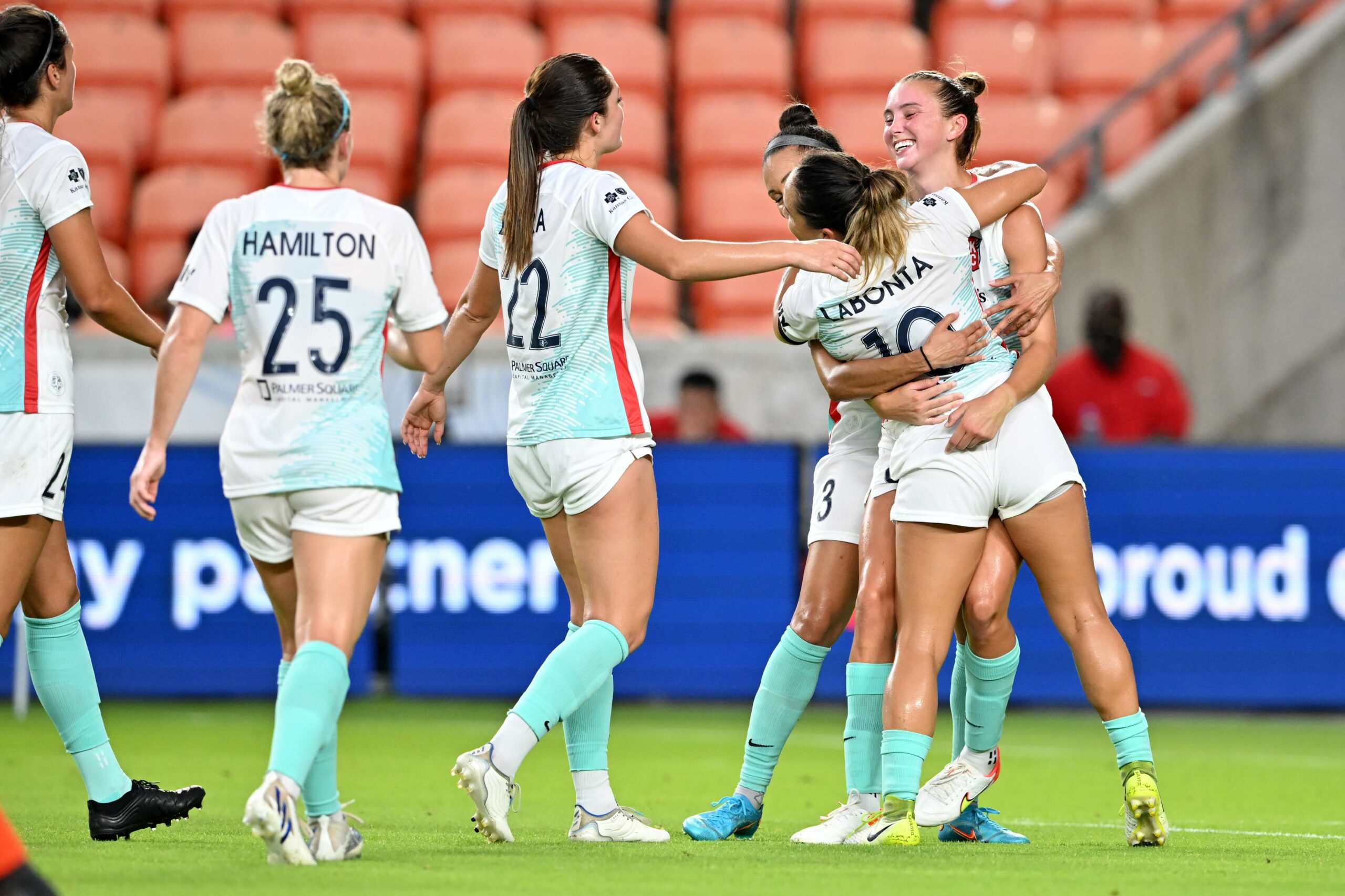 On Friday, three games were played in the National Women’s Soccer League, starting off with a convincing victory by the Kansas City Current over the Houston Dash. The night finished with a stunning comeback by Portland to force a draw with Angel City, who had held the lead for more than ninety minutes.

The Skinny: The matchup between Houston and Kansas City started out fairly even, but late first-half and early second-half goals by Kansas City gave them a lead just too solid for Houston to catch.

One Key Moment: While Kansas City was only leading by one at the end of first half, not even one minute into the second, KC’s Hailie Mace blasted the ball into the back of the net, bringing the lead to a sound 2-0. At halftime, it had still looked like anyone’s game, but by minute 46, Kansas City was the clear favorite.

Inside the Game: Leading up to Friday night’s match, both Houston and Kansas City were coming off of hot streaks. Houston’s recent defeat of North Carolina saw some of the quickest successions of goals in NWSL history, and after a slow start to the season, Kansas City was raking in points, having earned eight in their last four matches.

Unsurprisingly, the first half of the match was fairly competitive and even, with neither side emerging as truly dominant, though Houston’s Ebony Salmon – making her club debut – created some danger down at the Kansas City goal. In the 43rd minute, a questionable handball off the forearm of Houston’s Shea Groom led to a penalty kick solidly finished by Lo’eau LaBonta. While the half ended with a 1-0 lead for Kansas City, a comeback from Houston was certainly still plausible.

Until the 46th minute, that is. Within mere seconds of the second half’s commencement, Kansas City’s Mace found the back of the net from the top of the box and brought Kansas City’s lead to a convincing 2-0. The Dash did not hang their heads; however, the second half of the match was defined by Kansas City goalkeeper AD Franch’s saves, not Houston’s shots on goal. Franch remained totally reliable and unflappable for nearly the entire second half, punching balls away for 45 minutes of regulation and an additional 10 of stoppage time. An unlucky own goal by Kansas City’s Elizabeth Ball in the 100th minute ended Franch’s attempt at a clean sheet, but overall, her performance in goal made the difference for Kansas City and stands out as some of the best defense performed in the NWSL this season.

The Skinny: While this match was incredibly close in the first half, the Reign set themselves apart in the second with two almost identical goals, breaking down the defense the same way both times, to win at home on Pride Night in front of a record crowd. The energetic crowd were also treated to Kim Little’s long awaited return to the NWSL which did not disappoint.

One Key Moment: The Reign’s second goal was the one that really locked down the victory and Lumen Field was rocking!

Inside the Game: The possession stats for this game are heavily in North Carolina’s favor, but xG (expected goals data via StatsPerform) is the opposite, indicating the quality and quantity of shots the Reign took. With 50% of their shots on target and a total xG of 1.65, OL Reign performed at a level they can be happy with. They have had trouble finishing their chances this season, so despite having some wasted chances, two goals is a solid output. North Carolina, and particularly Kerolin Nicoli, were the better side with the better chances in the first half, but a halftime adjustment from the home side effectively neutralized Kerolin and therefor the Courage’s main attacking threat in the second half.

Reign’s goals did not come from slow methodical buildup, for the most part they came from what they usually do, forcing turnovers higher up the pitch and counterattacking quickly via their wingers.Unfortunately for Carson Pickett, due to Abby Erceg having an injury, she had to play center back for the first time, and the disconnect of the backline was glaring in how the two goals were conceded. Pickett is a wonderful defender, but the transition from outside back to center back is not always an easy one.

The Skinny: In a match bookended by goals, Angel City took an early lead in the 2nd minute and determinedly held onto it for until Portland scored in the 96th minute to force a draw.

One Key Moment: Portland Thorns’ midfielder Yazmeen Ryan was a threat all night with targeted shots on goal, including one that skated mere inches over the net in the first half. In the 96th minute, when Portland looked all but out of options, Ryan finally did what she hustled so hard to do all night – she found the back of the net, and equalized for her team with just 15 seconds to go.

Inside the Game: The Portland Thorns were the favorite entering Friday night’s match against Angel City, sitting at second place in the NWSL standing and having won or drawn every regular-season match since May 21st. So it was something of a shock when, just two minutes in, Angel City took the lead after a foul in the box awarded the home team a penalty kick. A fast-paced and aggressive first half ensued, and at the half, possession and shots from both sides were nearly equal.

The second half of the game would go on to gain significance not in goals but in debuts. On the Portland side, third-string goalie Shelby Hogan, playing in her first ever NWSL match, punched balls out of her face like her life depended on it. On Angel City’s end, NWSL and USWNT veteran Sydney Leroux made her debut, after joining the franchise just two days ago. And although both sides had some second-half attempts on goal, the score set in the 2nd minute remained true at the 90th.

Until Portland defender Madison Pogarch found her teammate Ryan, that is. With just about 15 seconds left to play, Pogarch sent the ball to Ryan who couldn’t have been in a better position to knock in a goal with her head. And though both teams will take home a point, the Thorns rejoiced as if they had won – sometimes, a last-second equalizer is enough to feel victorious.

NWSL after the FIFA break: Outlooks for all 12 teams as summer schedule heats up
NWSL Results: Chicago tops Gotham in Lewandowski’s final match