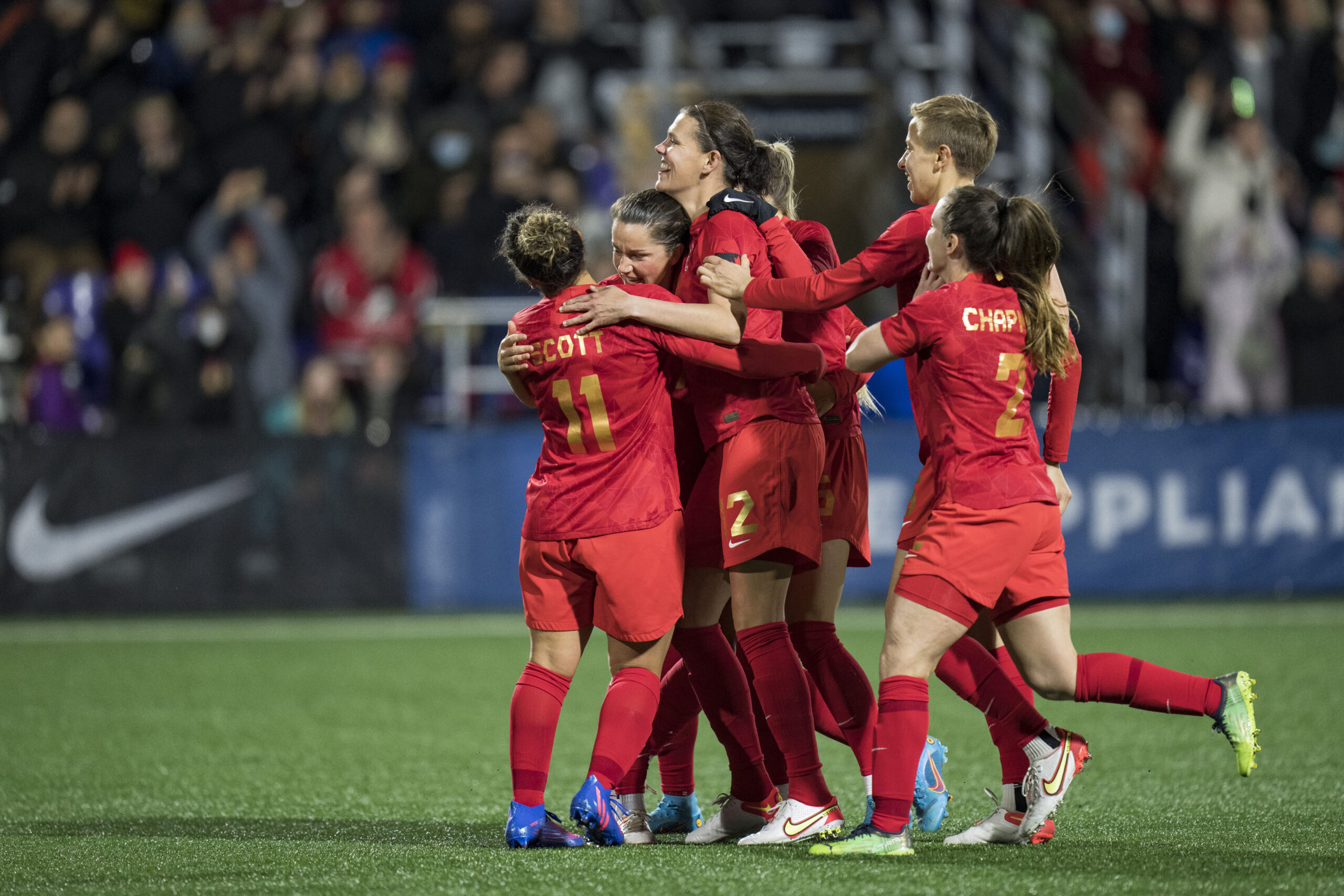 The Concacaf W Championship kicks off on Monday, July 4, but it’s not until July 5 that Group B takes the pitch for the first time in Monterrey at Estadio BBVA. The Equalizer previewed a competitive Group A, and now Group B is the focus.

There are some question marks after a friendly tune-up between Costa Rica and Haiti, while Canada remains the clear favorite. Panama and Trinidad and Tobago round out the group, eyeing up potential qualifying spots.

A reminder to check out our pieces on the tournament, including the layout that sees Concacaf W Championship as the qualifying tournament for both the 2023 FIFA Women’s World Cup and the 2024 Summer Olympics. There are four automatic World Cup spots up for grabs, and two FIFA inter-confederation playoff spots up, too. For the Olympics, only two spots belong to Concacaf, with the winner of this tournament qualifying automatically.

The reigning Olympic champions, Canada comes into the tournament as the only team to win aside from the United States. Canada took the Concacaf title in 1998 over Mexico and 2010 over Mexico again. Both matches were 1-0 victories. The location history is on Canada’s side: their 2010 win was when Mexico hosted the tournament.

Christine Sinclair leads Canada as its veteran leader and the player with the most international goals in soccer history. Sinclair’s total is up to 188, while other forwards like Janine Beckie (34 goals), Adriana Leon (23 goals) and 21-year-old Jordyn Huitema (14 goals) also provide threatening support in the attack.

With the retirement of goalkeeper Stephanie Labbé earlier this year, Kailen Sheridan, who hones her craft with San Diego Wave FC, has been the undisputed starting goalkeeper.

This calendar year has not been the kindest to Canada, though. Unlike their other Concacaf opponents, Canada only elected for one tune-up match ahead of the tournament, finishing in a scoreless draw with South Korea in Toronto last week. Back in April, while the other nations were in qualification to reach the W Championship, Canada hosted Nigeria for two friendlies, winning the first 2-0, but drawing the second, 2-2. Canada also competed in the Arnold Clark Cup, which saw them finish with one loss against Spain, one win against Germany and one draw against England, taking the third-place spot.

Canada, despite its struggles with consistency in 2022, is the clear-cut favorite in this group. Canada got matched up in a more favorable group than the United States, who have a strong Mexican side to compete against. However, Canada can’t misjudge their opponent, as Costa Rica has vengeance for not qualifying in 2018 and Panama has a full breed of young talent. Trinidad and Tobago is an up-and-coming squad looking to make noise.

The last time Canada participated in World Cup qualifying in Mexico, they won it all. Can they do it again?

The Ticas of Costa Rica made everyone turn their heads on June 28 in their friendly against Haiti — but for all the wrong reasons. Some have said that Costa Rica rested it’s core group, but Shirley Cruz and starting goalkeeper Noelia Bermúdez were on the pitch. Haiti ended up winning 4-2, after losing to Costa Rica previously on June 25, 2-1.

On the other hand, Costa Rica did have a fantastic bout in World Cup qualifying, earning clean-sheet victories in all four of their matches against Saint Kitts and Nevis, the U.S. Virgin Islands, Curaçao and Guatemala.

Either way, this is a Costa Rican side under Amelia Valverde that hasn’t experienced a lot of change. The old guard is still there and is looking to go to a World Cup maybe one more time before retirement or slowing down. Cruz is the captain of the team, and is 36, along with veteran defender Carol Sánchez. The youngest player on the Ticas‘ roster is María Paula Salas, but she is a veteran herself, already with 23 appearances.

Costa Rica will rely in the midfield on Raquel Rodriguez and another young talent honing her craft in Europe, Priscila Chinchilla, who has nine goals in 18 matches for Costa Rica. Rodriguez scored six goals for Costa Rica during qualification for the tournament, the most of any Costa Rican player. On defense, Valeria del Campo will be right at home at Estadio BBVA, where she plays club for C.F. Monterrey of Liga MX Femenil.

Costa Rica’s biggest test is going to come right out of the gate in qualifying, with a bout against Panama on July 5. One of the two sides is predicted to take the second-place spot in the group, which would see an automatic qualification to the FIFA Women’s World Cup in Australia and New Zealand.

However, should Costa Rica fall to Panama, they could very well find themselves trying to keep their head above water for a third-place spot. Ironically, an inter-confederation playoff is how the Costa Rican men’s side just punched their ticket to the men’s World Cup.

A young team jam-packed with talent, Panama made headlines in 2020 Olympic qualifying with young goalkeeper Yenith Bailey earning the nod over 30-year-old counterparts Nadia Ducreux and Sasha Fábrega. Bailey will likely get the nod over her older teammates.

A majority of Panama’s team features at the club level in Panama — with plenty of players on the roster — and in Costa Rica. That will come in handy when their big match against Costa Rica happens. Lineth Cedeño is one to watch in the attack, featuring for Hellas Verona in Italy.

In the qualification to the tournament, Panama was perfect, winning all four of their matches. However, against less strong opponents, Panama didn’t have giant scorelines like their counterpart Costa Rica and Group A sides, Haiti and Mexico. Instead, the most goals scored came from Karla Riley and Laurie Batista, notching four each. Cedeño followed behind with three goals, while four players scored twice.

This is Panama’s third time in the tournament, too, so they’re less experienced than all of the teams traveling to Mexico. Trinidad and Tobago is actually the most experienced team in the group, while Canada has nine appearances and Costa Rica seven in the Concacaf W Championship, or variations of the tournament.

The biggest test for Panama is going to be Costa Rica, but if Panama can provide an upset, then an automatic spot in the World Cup is likely theirs. If not, they’re going to have to fight Trinidad and Tobago for the third-place spot in the group.

Trinidad and Tobago is making their 10th trip to the Concacaf W Championship. The only team to advance to the tournament after drawing one of their matches, Trinidad and Tobago narrowly squeaked by Guyana, who they tied 2-2 on April 12, to claim the top spot in their qualification group.

Trinidad and Tobago earned a massive, confidence-boosting win during that W Championship qualification on April 9 against Turks and Caicos Islands, albeit an inferior team, with a 13-0 win on the road. Like Panama, though, Trinidad and Tobago does not have one player who scored an exuberant amount of goals. It’s an all-around effort from T&T, with Karyn Forbes, Asha James and Chelcy Ralph all finishing the four qualifying matches with three goals, leading the team.

Victoria Swift is the player to watch for Trinidad and Tobago, as she features for Club León in Liga MX Femenil. Swift has been with the Mexican side since 2021, making 20 appearances. A few collegiate players are on Trinidad and Tobago’s roster, too, including Ralph from Ball State, Klil Keshwar from St. Francis and midfielder James, who features for West Texas A&M.

Trinidad and Tobago has a major challenge with Group B, but don’t expect them to be tossed around. Back in 2014, Trinidad and Tobago finished in fourth place. The Soca Warriors could easily compete for the third-place spot and find themselves in a FIFA inter-confederation match.

Hyped as favorites at home, England might have too many flaws for deep EUROs run
Genoveva Anonman’s legacy: A star who was stripped of her rights