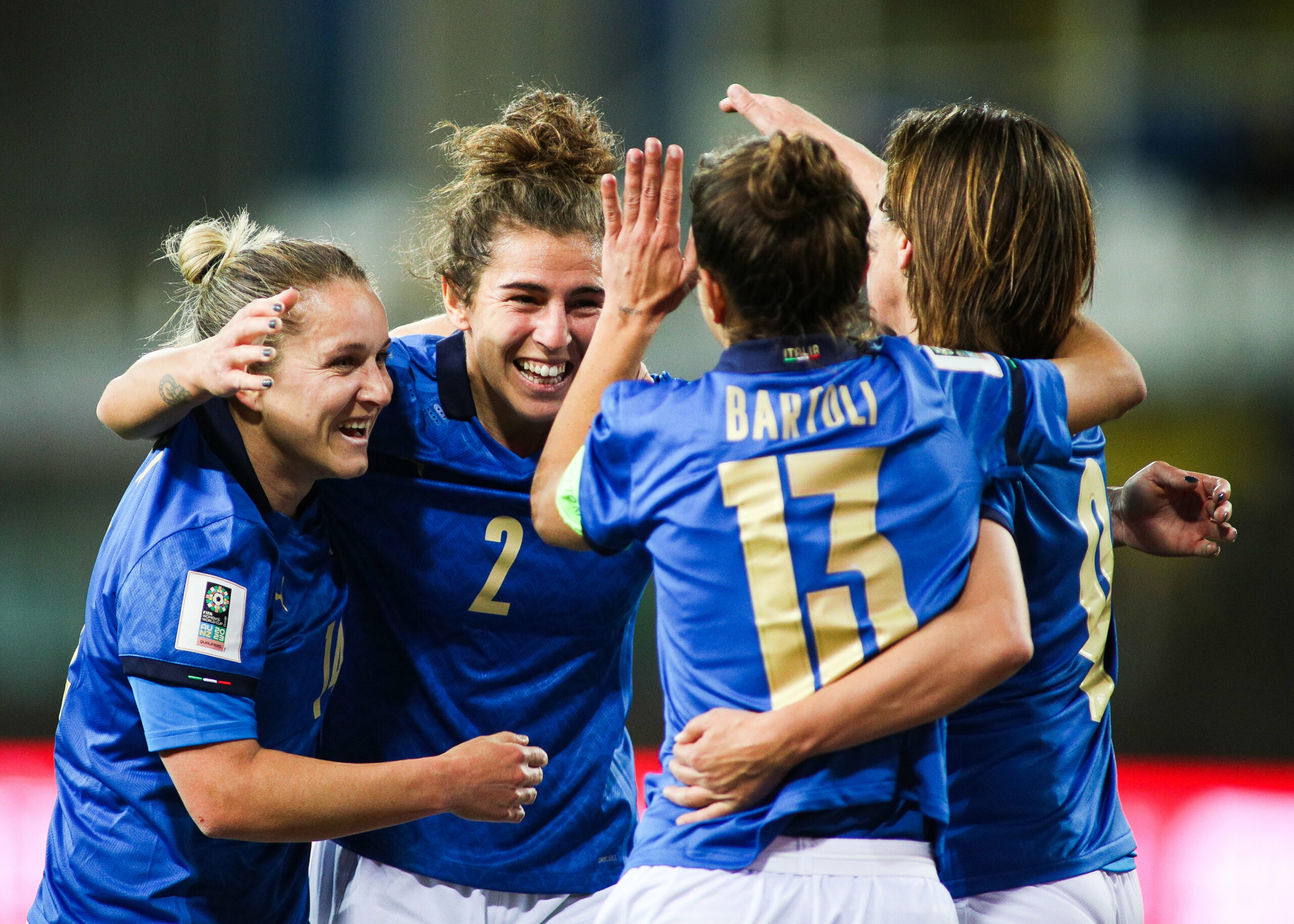 The Equalizer continues its group previews ahead of the 2022 UEFA Women’s EURO. Group D is yet another set of teams that threaten to perform with a set of intriguing and world-class players. France are by far the highest quality team in the group but Iceland, Italy and Belgium all possess players from Champions League level clubs with the ability to cause an upset on their day.

While France are expected to progress, the opportunity for an upset, and seeing two unorthodox teams qualify, is highest here. So, how does each look to shape up?

Don’t forget to catch up with Group A, Group B and Group C with our previews.

The French are polarizing figures in women’s football. On one hand, they’re blessed with top-class talent from youth to senior level with several selection headaches. On the other hand, they are plagued with controversy and resentment between coach and squad. The untimely and long-term implications of these tensions have convoluted their path to success with their golden generation. A more in-depth story on France’s issues can be found on The Equalizer later this week, but it’s worth noting that they are still considered one of the favorites to take the title.

Even with squad concerns, France have more than enough quality to take on the very best. They often line up in a 4-3-3 that relies on their attacking line to generate most of their chances. The midfield trio provides support through creativity and distribution. The basic tactical concept is to use the ball-playing central defenders to create passing opportunities into the middle before the midfield creates passing opportunities to the flanks, for the wide players to create 1-v-1 chances to create chances for mercurial striker Marie-Antionette Katoto.

Katoto is part of an attacking contingent that breeds fear and boasts one of the best counterattacking forward lines at the tournament. With Kadidiatou Diani, Selma Bacha, Sandy Baltimore, Delphine Cascarino and Katoto, France have a combination of players capable of playing in quick transitions and possess excellent technique and vision. Mostly, young players, they’re all experienced by club standards having played a regular part of their season as starters.

Further back, there is the experience of Griedge Mbock and Wendie Renard to lead their back line and ensure defensive solidarity covering the attacking Sakina Karchaoui from left back. The Paris Saint-Germain fullback has excelled this season, turning into one of the best left-backs in the world.

Iceland are the minnows of Group D, having qualified for a major tournament for just the fourth time in their history. Iceland will be looking forward to making a mark on the tournament with a talented squad. Having only progressed out of the group stages once, in 2013, they’ll be hoping to do so again. The last time they did, they reached the quarterfinals. Manager Thorsteinn Halldórsson will want to build on the performances at the SheBelieves Cup, where they finished second to the United States.

Tactically, Iceland stick to the basics and opt for route-one football. They avoid any intricate build-up patterns and look to play higher up the pitch and win second balls. In doing so, Iceland is able to progress farther up the field to start creating more clear-cut chances.

Their starting system is a 4-3-3 that complements their tactics. The long balls through the middle mean their three midfielders can converge to outnumber and win back possession. In the final third, they want to use their wide players to create goal-scoring opportunities through crosses and cutbacks. You’ll often see them played at the edge or just inside the penalty box for a late runner to shoot.

Alternatively, the long ball tactic is also used to create direct chances into the area. Their long throw-ins have given them a unique advantage in set pieces giving them a different angle of attack and one that can catch teams off guard. There’s very much a safety-first mentality with Iceland given that even in transition they look for comfort in numbers before committing players forward.

Iceland’s tactics can feel relatively primitive, but they possesses some class players who have yielded Champions League and other European domestic titles. Sara Björk Gunnarsdóttir is their highest-profile player, having played for Wolfsburg and Lyon before recently signing for Juventus. The nomadic midfielder is their talismanic figure and will feature as a box-to-box No. 8. Dagný Brynjarsdóttir is their deep-lying central midfielder anchoring the base of midfield. The West Ham star is another experienced international that will guide Iceland through some tricky fixtures.

Karólína Lea Vilhjálmsdóttir is a 20-year-old midfielder that plays her football with Bayern Munich that could give Iceland more attacking drive from midfield. Lastly, Sveindís Jane Jónsdóttir is arguably their most anticipated starlet having played a major role for Wolfsburg this season. Known for her long throws, Jónsdóttir is a quick, technical winger that drives down the flanks excelling in 1-v-1 situations.

This mixture of young and experienced gives Iceland a good blend that could see them be very difficult to beat.

Milena Bertolini came through as head coach after a series of disappointments for the Italian women’s national team. Their participation in the 2022 EURO will be more than just making up the numbers. The squad is built of some world-class players and can be considered dark horses. Le Azzurre reached the quarterfinals of the 2019 FIFA Women’s World Cup before being knocked out by the eventual finalists, the Netherlands, showing the quality they possess in recent history.

From a tactical perspective, Italy is a possession-based side that look to operate using short, incisive passes to create goal-scoring opportunities. Given that most top teams will adopt a similar strategy, Italy will have to adjust slightly but their strong squad gives them a chance to compete and dominate, especially in the midfield areas. Italy have averaged close to 60% possession in the last 12 months which supports this notion and is likely to continue.

Their midfield setup means they’re likely to use their defensive midfielder as a primary outlet and receiver. From here, the technical quality in these players is used to bypass any high presses and allow Italy to play through the thirds and unleash their explosive forwards. Manuela Giugliano is their single pivot and will be integral to their build-up phase. Aurora Galli and Arianna Caruso possess a good mix of creativity, passing and energy that should see them create enough chances and moments of progression.

Sara Gama is their defensive stalwart and will be hugely important in making sure Italy is hard to beat.

It is in attack where Italy shine, with Barbara Bonansea, Cristiana Girelli and Valentina Cernoia. The three forwards are clinical and creative playing their football together at Juventus. Bonansea is their talismanic figure and will be relied upon to burden much of the creativity. Agnese Bonfantini is a 22-year-old midfielder that is sure to be an explosive presence in midfield whether it be off the bench or from the start. The midfielder shined under Joe Montemurro at Juventus last season and will relish the chance to soak up the experience in London.

Rounding off Group D are Belgium. The Belgian Red Flames come into the tournament in good form having finished top of their qualifying group with just one loss, making their second-ever appearance. Ives Serneels will be confident in qualifying from the group if they can take points off Italy and Iceland.

Belgium’s tactical history involves them being a very hard-to-beat side that uses pace in transition to win. Often in a narrow 4-4-2 diamond, they can also play a 4-3-3 system. This formation allows Serneels to play to his players’ strengths and keep a compact central space and force teams to go wide. The 4-4-2 diamond transitions into a 2-3-5 attacking shape, giving them numerical superiority and width. The speed and creativity they possess allows them to do this effectively.

Tine de Caigny is their specialist attacking midfielder and will be the one to connect the forwards and create from a deeper position. The Hoffenheim attacker is a mobile player that can both score goals and create. However, their two standout players are striker Tessa Wullaert and midfielder Janice Cayman. The partnership between Wullaert and Hannah Eurlings is most important to overpower opposition defenses and play on the shoulder in the 2-3-5 attacking structure. Wullaert will look to operate between the spaces and latch onto deep passes through the channels.

Cayman is a versatile player capable of playing at right back, on the wings, and in midfield. Although she may start in midfield, we could see Cayman moved around as the game progresses. The left midfield spot will likely belong to Sarah Wijnants, who is their creative hub and particularly her movement from the wing will cause a major threat to opponents.