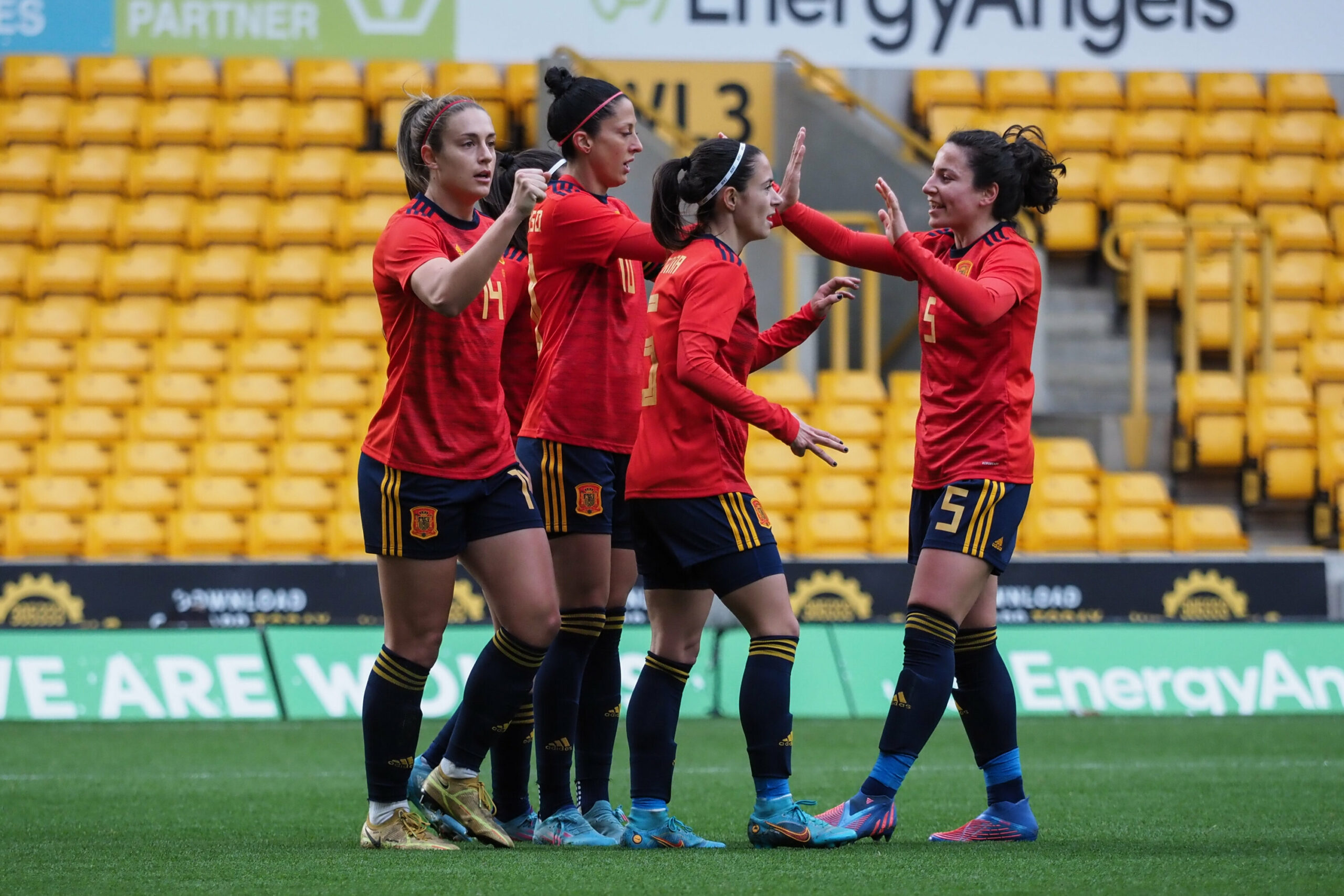 We at The Equalizer continue our preview of the 2022 UEFA European Women’s Championship by diving into Group B. Earlier this week we covered Group A, and broke down some of the players to watch this summer.

Now we move onto a group that is widely regarded as the most intriguing of the whole tournament. Spain and Germany are among the favorites for the title. They are joined by two live underdogs in Denmark and Finland. Here we analyze the outlook, tactics and key players of all four teams.

Finalists at the last EUROs in 2017 and semi-finalists in 2013, Denmark have a good pedigree in this tournament. It will be difficult to repeat those feats this time around, though, as they find themselves in the competition’s toughest group. Nonetheless, having beaten Italy to qualify, there are plenty of reasons for optimism.

Lars Sondegaard lines his team up in a 3-4-3 system that ensures balance. Denmark always have four or five players behind the ball while attacking, helping them to defend counters if and when they lose possession. Their outside center-backs are responsible for progressing play, running the ball forward or picking out the strikers and wing-backs. With lots of height in the team, the Danes will also be dangerous from set pieces.

In Pernille Harder, Denmark possess one of the finest strikers in the world, someone who can play wide or through the middle. With exceptional movement between the lines, speed on the dribble and an ability to score from anywhere in or around the penalty box, the Chelsea star adds flair to a team whose possession can otherwise be too safe and sideways.

Harder is backed up by Signe Bruun, a strong attacking focal point, and Nadia Nadim, who returned from injury in time for the tournament. There is also an exciting new generation featuring 21-year-old Real Madrid wing-back Sofie Svava, 22-year-old attacking midfielder Mille Gejl and 18-year-old playmaker Kathrine Kuhl. For Denmark to progress, Germany or Spain must fall in the group stage. It’s a tough ask, but they have what it takes to spring a surprise.

They are the bottom seeds, but Finland should not be taken lightly. They won their qualifying group, ahead of Portugal and Scotland, conceding just once in four games against their main rivals for top spot. It’s also worth noting they are led by one of the most experienced head coaches around in Anna Signeul, who previously guided Scotland to their first-ever EUROs in 2017.

Preparations for the tournament haven’t been ideal. In World Cup qualification they lost at home to the Republic of Ireland and drew away to Slovakia, leaving them with slim hopes of a playoff spot. They also suffered damaging defeats in February’s Tournoi de France, 5-0 to hosts France and 3-0 to an experimental Dutch side. Some pride was restored in the final game of that friendly tournament, however, with a 0-0 draw against Brazil underlining the qualities that got Finland to this EUROs.

Signeul likes the 4-4-2 formation and her team is compact defensively. Natalia Kuikka is a roving wingback for the Portland Thorns, but at international level she plays a key role at the heart of her team’s back four. On the ball, Finland looks to play out with passing triangles in the wider areas and always pose a threat with two good strikers up top. One of them, Real Sociedad’s Sanni Franssi, withdraws to receive the ball; the other, Linda Sallstrom, runs in behind.

Only two players in the squad operate domestically. The vast majority plays at a good level in Sweden; others ply their trade in England, France, Spain, Italy or the United States. Finland has talent and, come tournament time, should be well-organized. They might not get to the knockout rounds, but expect them to make life difficult for one or two of their Group B opponents.

Germany sailed through qualifying, winning all eight games. Since then, though, their momentum has stalled with a series of underwhelming performances. They took an injury-weakened squad to February’s Arnold Clark Cup and emerged with just one point – a draw against EURO group rivals Spain. Then, in April, came a shock 3-2 defeat to Serbia in World Cup qualifying.

The Serbia loss highlighted Germany’s central defensive issues. At times, head coach Martina Voss-Tecklenburg has experimented with midfielders like Lena Oberdorf at center-back, but that hasn’t always worked well. Against Serbia, a pairing of Sophia Kleinherne and Jana Feldkamp failed to deal with the opponent’s direct play. Marina Hegering may help, but her return comes after a season hampered by injuries in which she played just five Bundesliga games.

Dzsenifer Marozsan will miss the EUROs because of a torn ACL. This undoubtedly weakens the German roster on paper, but it could simplify things in reality. In the past, Voss-Tecklenburg has jammed as many attackers as possible into her 4-3-3 system, to no avail. When Germany met Sweden in the 2019 World Cup quarters, they fielded a midfield of natural forward Alexandra Popp alongside playmakers Lina Magull and Sara Däbritz. They were too open, and were counter-attacked out of the tournament. Without Marozsan, Voss-Tecklenburg may now be forced into fielding a more balanced line-up.

Germany still possesses one of the finest attacking selections at this EUROs. Tabea Wassmuth starred in this season’s Champions League, while 21-year-old Klara Bühl and 19-year-old Jule Brand have impressed. These players, alongside Popp, Lea Schüller and Svenja Huth, give Germany the firepower to score against anyone. The challenge will be keeping the ball out of their own net. To do that, it’s imperative that they find a working center-back partnership and a stable midfield.

Going into this summer’s EUROs, Spain are in a curious position. They find themselves the favorites, despite having never gone past the quarter-final stage. This is partly down to the emergence of Barcelona as a genuine continental superpower at club level. That team will supply the majority of the Spanish first XI, including goalkeeper Sandra Panos; center-backs Irene Paredes and Mapi León; midfielders Aitana Bonmati, Patri Guijarro and Alexia Putellas; and roaming attacker Mariona Caldentey.

With a core of that quality, it’s understandable that Spain enter this tournament as serious contenders. Yet their status is also the consequence of external factors. Simply put, this competition is wide open: the Dutch, the reigning champions, are in transition; Germany aren’t what they once were; France have been hampered by off-field controversies; and hosts England are only now recovering from two years of dire displays.

Spain has no problem keeping hold of the ball. However, the age-old problem remains: how do they break down obstinate defenses? At the 2019 World Cup, they failed to score in group games against Germany and China, and beat South Africa with the help of two penalties scored by Jennifer Hermoso. In four recent friendlies against top opposition – Brazil, England, Germany and Canada – they only won once and scored just three goals.

Hermoso will miss the EUROs due to injury. Esther Gonzalez is an able deputy, but a different type of striker. This may alter the attacking dynamic. On the wings of his 4-3-3, head coach Jorge Vilda can call on promising youngsters in Claudia Pina, Athenea del Castillo and Amaiur Sarriegi. Spain will almost certainly dominate possession in every game they play this summer, but turning that into regular goals will require end product from a frontline untested at this level.

Carmelina Moscato is ready to make her mark in Mexico
Three talking points: USWNT stumbles, then thrives in 3-0 over Colombia