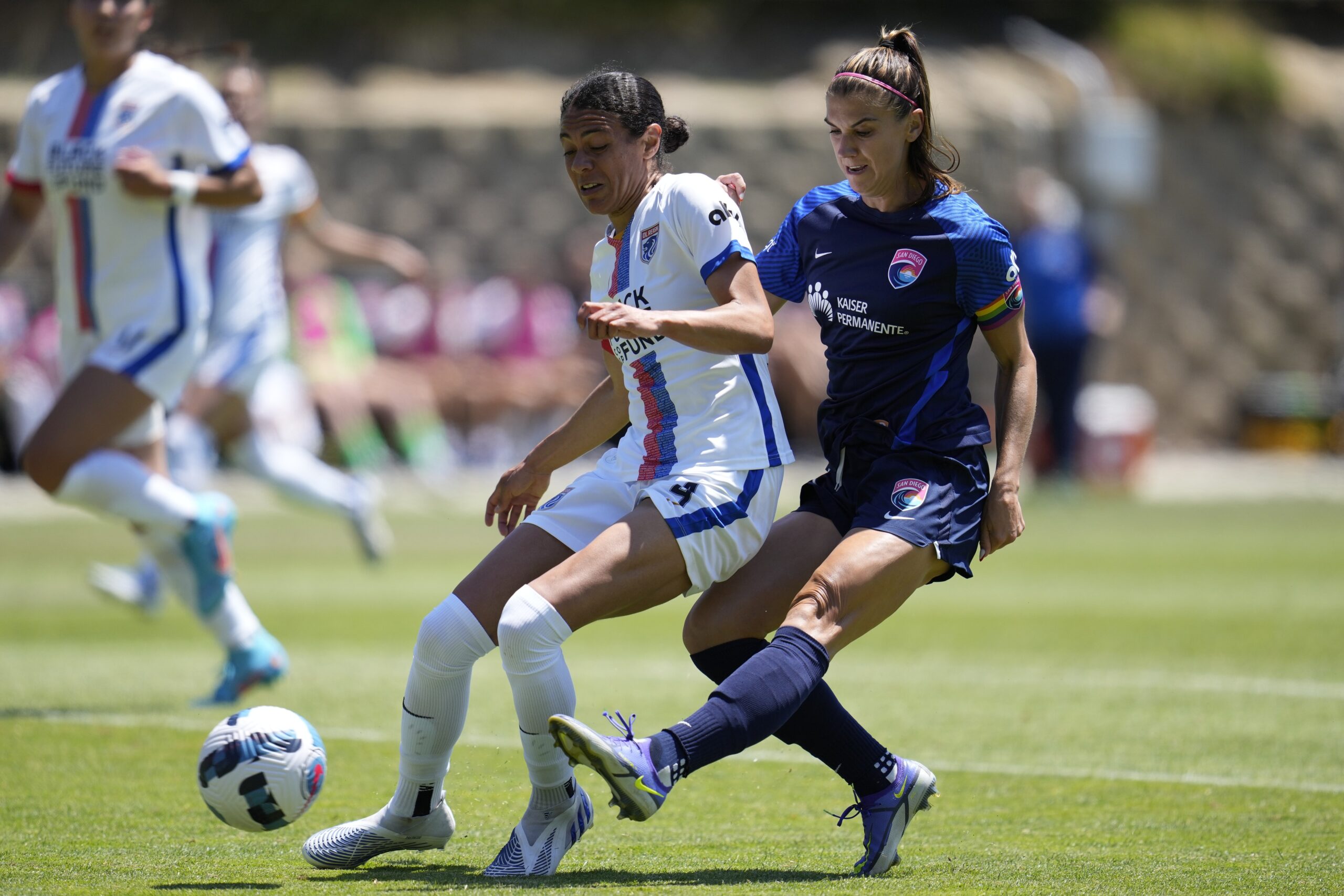 The stars were out again in the National Women’s Soccer League on Sunday. Alex Morgan extended her league-leading goal haul, Mal Pugh carried the Chicago Red Stars to another victory, and Sophia Smith dominated again as the Portland Thorns steamrolled the Houston Dash.

The Skinny: Alex Morgan scored early for her league-leading ninth goal of the season as the Wave poured on pressure to the Reign’s curiously high defensive line, but Jess Fishlock scored the best team goal of the season a few minutes before halftime to equalize. A stalemate played out in the second half between two tired teams seeing each other for the fourth time in two months in all competitions.

One Key Moment: Fishlock’s goal was the conclusion of 22 (!) straight passes from the Reign on a spectacular team goal. It was punctuated by Fishlock flicking the ball on with her heel for the third-to-last pass, then running in behind to collect Rose Lavelle’s textured through ball for the top-corner finish.

Inside the Game: San Diego jumped on the Reign in the opening minutes, with Morgan getting played in 1-v-1 with Reign goalkeeper Phallon Tullis-Joyce two minutes into the game, only for Tullis-Joyce to be quick off her line. Eight minutes in, Morgan got in behind and scored — and the Reign are not going to enjoy watching that footage back.

The Reign dropped off pressure and allowed Wave goalkeeper Kailen Sheridan time on the ball. Nothing would be wrong with that, some 100 yards from their goal, if their back line was not close to midfield, and if Morgan wasn’t allowed to slip right between Sofia Huerta and Alana Cook. Morgan said postgame that she knows fullbacks like to jump the short passes in this league, and she put her hand up for the through ball. Sheridan’s assist was just the third in league history by a goalkeeper.

Pressure only continued and the Reign’s back line looked uncharacteristically unsteady in the opening half-hour, right down to Cook being pickpocketed as the last defender by Kelsey Turnbow in the opening minutes. The saving grace for the Reign was only conceding one.

A stoppage of play in the 23rd minute for a minor injury to Morgan allowed the teams to huddle on the sideline, and the Reign regrouped from there, settling into possession as the Wave’s high pressure dropped off. San Diego brought five players in their high press to match up one for one with the Reign in the early part of the game, but that tailed off — and with it, momentum. Wave head coach Casey Stoney said postgame that heavy legs caught up with the team in the second half, and she thought the Reign did well to shift and then capture momentum late in the first half.

That lower pressure was part of the Reign’s goal, as center back Sam Hiatt was in possession nearly at midfield and still uncontested when she played the vertical pass for Fishlock’s goal. Lavelle and Fishlock found the game more in the second half, and the Reign turned a nightmare start into a respectable point on the road. San Diego is still tied for most points in the league. If they weren’t already before this, the Wave look like a team capable of hanging with anyone in the league over the long haul.

The Skinny: The Chicago Red Stars extended their unbeaten streak to six games with a 1-0 win at home on Sunday over the Orlando Pride.

One Key Moment: The match had just one goal in store, and it was a stunner by Mallory Pugh. In the 10th minute, Pugh collected the ball from Bianca St. Georges, ran at the penalty area, and ripped a shot from distance that Pride keeper Erin McLeod had no chance of reaching.

While Pugh’s golazo is certainly the highlight of the night, let’s rewind about 10 seconds to see how the sequence began. Orlando’s Kylie Strom had possession and chose a poor passing lane to try to fit the ball, giving up the turnover to St. Georges, who immediately lifted her head up and took advantage of the space in front of her to find Pugh. It was a poor turnover to concede, especially with Pugh on the opposing attacking line.

Inside the Game: What can we say about Pugh that hasn’t already been said? Her spectacular strike on Sunday night bumps her total to five goals so far this season, and puts her second behind the Wave’s Alex Morgan. But it’s not just Pugh’s ability to score that makes her so dangerous. On Sunday she also displayed her skill as a connector, frequently dropping back to pick up the ball for her squad in the middle of the park to get things going offensively.

But it wasn’t all positives for the home side. Chicago center back Kayla Sharples went down with an apparent knee injury in the first half and after being checked by trainers, had to exit the match.

Meanwhile, the Pride registered nine shots, but only one landed on target throughout the 90 minutes. It was that sort of day for the visitors; they often had no trouble getting the ball close to their opponent’s box, but once there, couldn’t quite put the final passes together to get a good look on goal. Orlando’s bright spot was Abi Kim, who they often tried to find in transition to no avail.

The Skinny: Sunday night’s face-off between the Houston Dash and the Portland Thorns was nothing short of a drubbing, as the Thorns handed the Dash a 4-0 blowout with goals in every style.

One Key Moment: In the 74th minute, Portland’s Olivia Moultrie made history by becoming the youngest person to ever score in NWSL history. This was not only a historic landmark for the Thorns – and the league – but also the moment when the Dash gave up on any real attempt to make a comeback.

Inside the Game: Both Houston and Portland entered Sunday’s match confidently, with the Dash unbeaten in their previous six matches and the Thorns unbeaten in their last three. But with the Dash lacking star Rachel Daly (out on international duty) and the Thorns pulling veteran Christine Sinclar at the last minute due to an injury in warm-ups, it was hard to predict which side would prevail.

Until the first minute, that is. Before the clock even counted a full 60 seconds, the Thorns were already on the board with an own goal by the Dash’s Katie Naughton, and the pendulum would never swing back in the Dash’s direction after that. The Thorns controlled the first half, but their performance wasn’t anything extraordinary. A penalty kick taken by Sophia Smith gave the Thorns a 2-0 lead by the half, but both sides probably entered halftime feeling like the match was far from settled – an own goal plus a penalty kick doesn’t exactly feel like guaranteed insurance.

In the second half, however, the Thorns ironed out their wrinkles. Sophia Smith and Moultrie started to connect on the front line, and in the 74th minute, Moultrie nabbed her first NWSL goal, making history as the league’s youngest scorer ever. From there, one more Portland goal – a messy volley that initially looked like an own goal but was later credited to Smith – established the game as an official flaying of the Houston Dash.