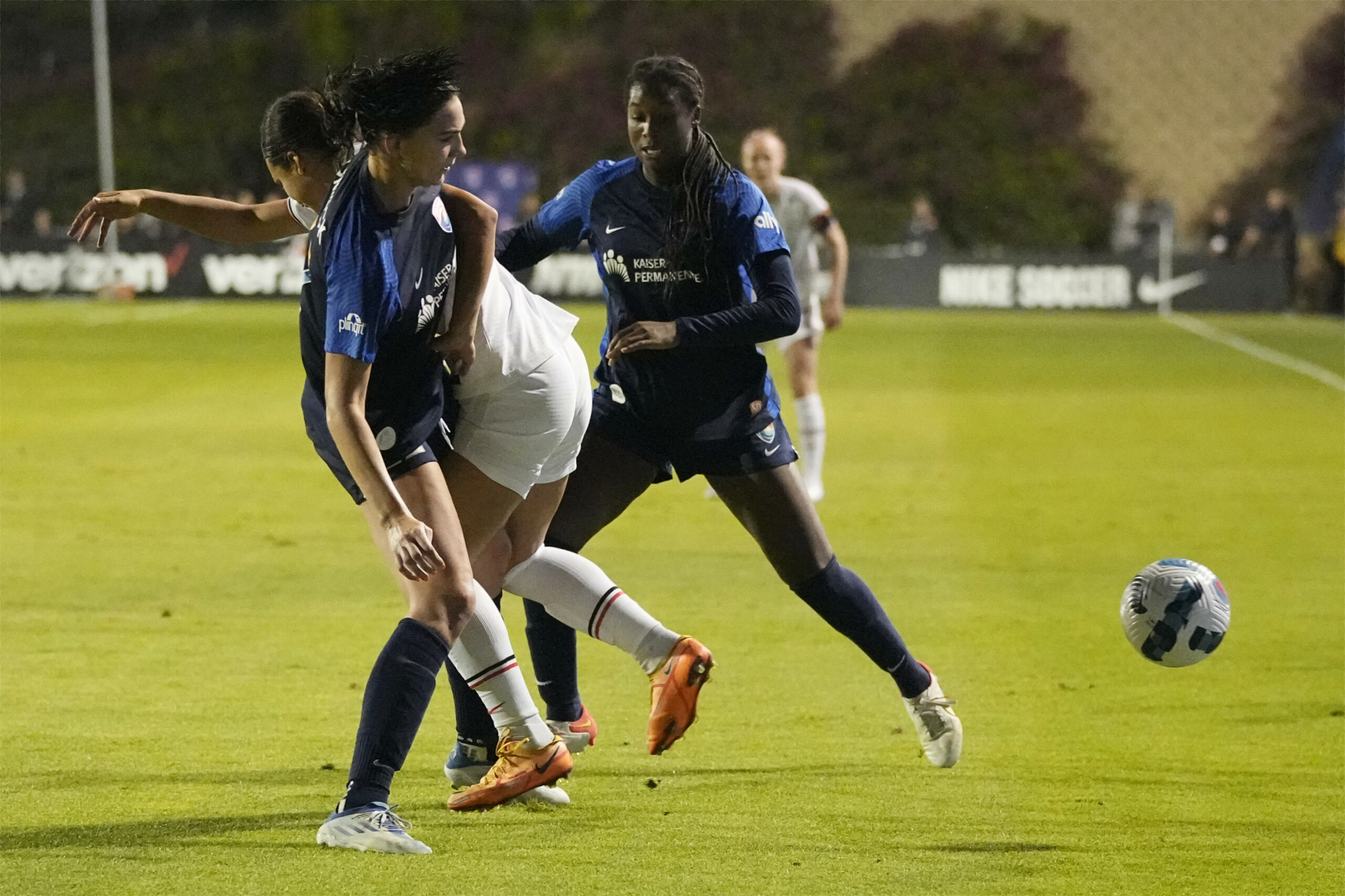 The Skinny: Some key refereeing decisions did not go San Diego’s way in the first half on Wednesday night, but the Wave managed to claw back from a two goal deficit to draw Portland. Thorns captain Christine Sinclair celebrated her 150th NWSL regular-season appearance with a goal.

One Key Moment: After withstanding wave after wave of adversity – including conceding a soft penalty, and having a ball appear to cross the line, only to not be counted – the San Diego Wave completed a second-half comeback in the span of seven minutes thanks to Taylor Kornieck. Her second goal – the equalizer – was beautiful from start to finish, as Kornieck was able to rise to meet Christen Westphal’s perfectly placed cross.

Inside the Game: This match had true NWSL After Dark energy.

Right out of the gate, a fairly soft looking penalty was called when Raquel Rodríguez went to ground after a challenge by Kristen McNabb, and Thorns forward Sophia Smith made no mistake with the conversion.

The Wave’s bad luck continued midway through the first half, when a shot by Sofia Jakobsson appeared to cross the goal line, but was not called as a goal. Of course, without goal line technology, we only have the replays we are given and we can’t be one hundred percent certain, but Wave players sure made their case to the referee to no avail.

But the Wave didn’t stand down. They actually outshot the their opponents 21-9, and took advantage of some sloppy defending in the box that was on display earlier in the match from Portland. Kornieck’s first goal was the direct result of Portland’s inability to clear a corner kick, and she was virtually unmarked for her equalizing header.

The Skinny: In a busy match for goalkeepers Alyssa Naeher and Aubrey Kingsbury, the Chicago Red Stars and Washington Spirit split the points with a scoreless draw in Illinois.

One Key Moment: Technology will always surround the NWSL — or, we should say, the lack thereof. Early in the second half, the Washington Spirit came out firing on all cylinders, with a link-up play between Ashley Sanchez and Trinity Rodman. Chicago goalkeeper Naeher made a diving block against Rodman, who entered the match with Sanchez at the half. A few minutes later, Washington had another chance where it looked as if the ball went over the line, but was credited as a save to Naeher and pushed out of play.

Inside the Game: Between the goalkeepers, Kingsbury had the busier night. The Spirit goalkeeper made five saves to deny Mallory Pugh (twice), Yuki Nagasato, Ava Cook and Sarah Luebbert, who made her second consecutive start since returning to Chicago from Liga MX Femenil, where she was on loan at Club América. Meanwhile, at the other end, Naeher made three saves to deny Rodman, Sanchez and Ashley Hatch.

Since the beginning of June, Washington has already played three NWSL matches. They recently pulled out of the Women’s International Champions Cup — who announced that C.F. Monterrey would take the Spirit’s place, along with Chelsea, Lyon and the host team, Portland Thorns — due to scheduling concerns. And Washington has another short rest ahead of them, facing off against the North Carolina Courage at home on Saturday, June 11.

Chicago is in the same boat. The two sides recently met on June 1, and just like Washington, Chicago also played a match this past weekend, defeating OL Reign at home, 1-0. Chicago gets an extra day of rest, facing the Orlando Pride on Sunday, June 12.

This match, notably, was the rescheduled home opener for the Chicago Red Stars. Both sides were dealing with injuries, as Washington is still missing Kelley O’Hara and Andi Sullivan, while Chicago was without Morgan Gautrat and Bianca St. Georges.