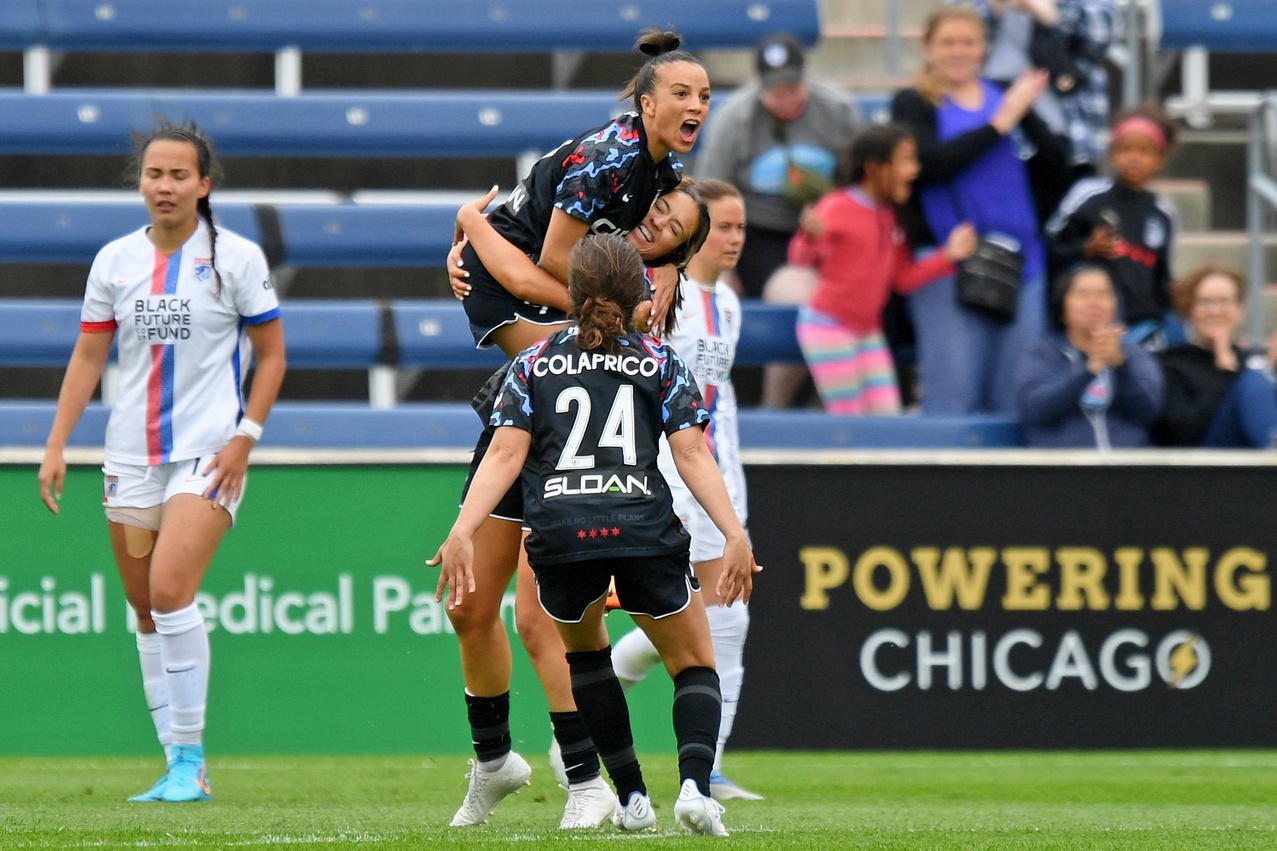 There were four National Women’s Soccer League games on Saturday. Here’s what went down.

The Skinny: Mallory Pugh continued her red-hot start to the season as the Chicago Red Stars leapfrogged OL Reign and extended their unbeaten streak to four games.

One Key Moment: Pugh showed ice-in-her-veins composure to cut back in a tight space and bury the ball in the top corner.

Inside the Game: The goal is the main highlight, but Pugh found herself in behind the Reign’s back line several times on the night, including three other incidents in which she forced Phallon Tullis-Joyce into a 1-v-1 save at the near post. Pugh is front and center in the conversation for the best forward in the league right now, alongside Sophia Smith and a few others. For those two, in particular, every moment on the ball is one which requires an observer to hold their breath.

Chicago’s three-back continues to work well, and credit again goes to Tatumn Milazzo. In the past eight days, she has faced an onslaught of 1-v-1 battles against Smith, Trinity Rodman, and the Reign’s multi-faceted attack. Rodman had some moments of success, but Milazzo was largely great against Smith and solid overall. On Saturday, she had Vanessa DiBernardo and Danielle Colaprico in front of her in the double pivot. Sarah Leubbert was dangerous roaming the right side as the wingback role as she reintegrates with the team following a successful loan with Club America.

The Reign’s unbeaten run stops at five games with a trip to current league-leaders San Diego on tap next week.

The Skinny: NJ/NY Gotham FC have their first win streak of 2022 following a 1-0 win over the Washington Spirit on Saturday night at Red Bull Arena. Midge Purce accounted for the scoring in the 21st minute. The goal itself was little more than a tap-in after Ifeoma Onumonu got in behind the Spirit defense and found Purce unmarked inside the six-yard box. Gotham improved to 3-2-0 (9 points) while the Spirit fell to 1-2-4 (7 points) and are winless in six regular-season matches since opening with a win over OL Reign.

One Key Moment: After being badly outplayed for most of the opening half, the Spirit had a golden opportunity to go into the break on level terms. Bayley Feist, who earlier nearly helped concede a second after a communication issue with Sam Staab, made a perfect read to win possession in midfield and played in Ashley Hatch. It looked like Hatch could have shot from distance and beat Michelle Betos who was out of position and scampering back. But Hatch took some extra touches and eventually shot to Betos’ left. The veteran keeper lunged left and made a fine save, then narrowly beat Feist to the rebound to bring the match to halftime with Gotham in the lead. Betos was strong during the 2nd half as well to earn her first win and shutout in a Gotham kit.

Inside the Game: An already banged up and fatigued Spirit side were without Trinity Rodman for the first time since the 2020 Fall Series (Rodman was drafted in 2021) due to COVID-19 protocols. Her absence was palpable. Not only did the Spirit lack their safety blanket down the right side of the attack, but they clearly missed Rodman’s aptitude at tracking back defensively. Yet it was on the opposite side that the Spirit ran into trouble early. Purce was hardly marked at all during the first quarter of the match and missed on a header from close range not long before she put Gotham in front. The Spirit eventually cleaned that up but paid the price for their inability to find an answer for Purce in the early stages.

The Skinny: Alex Morgan continues to be the main source of San Diego’s offense, but that worked out okay for the Wave today as the veteran striker scored her 7th and 8th goals of this regular season. Kansas City played well at home, exploiting the Wave’s set-piece defending to take the lead twice, but were ultimately unable to hold on to those leads.

One Key Moment: This 90th-minute equalizer, and Morgan’s eighth goal of the season, was an important morale boost for the Wave. The tally came in open play, something San Diego have struggled with, and in crunch time. It will also hopefully get their star Swedish signing Sofia Jakobsson going after providing her first NWSL assist with tricky accuracy.

Inside the Game: This was the first-ever meeting between these two expansion teams and it did not disappoint thanks to some difficulty defending on both ends. The first goal came early on from Kristen Hamilton on a rehearsed corner kick that the defense failed to adjust to quickly enough. After that goal, it seemed Kansas City could successfully absorb the pressure from the Wave, but after numerous corner kicks, they failed to make the initial clearance and ended up conceding a penalty kick off a handball. Obviously, Alex Morgan converted to tie things up, making her a perfect 4-for-4 from the penalty spot this season.

The Current would take the lead once again thanks to the rookie Elyse Bennett, who is having a fantastic first NWSL season. Similar defensive issues to the first goal, allowed Kansas City to take advantage of one of their few chances, though it takes nothing away from the setup and finish.

And AGAIN, it seemed Kansas City would successfully absorb the attacks of the Wave, but they had a lapse in one of the most dangerous points of a game, the last five minutes. The Current will feel they should’ve won that game, but the persistence of San Diego paid off when the home team couldn’t hold on.

The Skinny: North Carolina earned its first win of the regular season in emphatic fashion, with Debinha setting up the first goal and finishing the third in Louisville.

One Key Moment: A Courage victory was just on the day, but the 3-0 score was harsh, in part because Racing had a would-be goal from Jess McDonald incorrectly called back for offside. That would have cut North Carolina’s lead to 2-1 with a half-hour to play. Maybe, just maybe, this result goes a different way if that goal stands.

Inside the Game: Kerolin returned from a three-week layoff after being on the receiving end of that brutal Sam Staab tackle in the Challenge Cup final on May 8, and the Brazilian attacker picked up with the same momentum she had been building in that competition. She paired up top with Diana Ordonez, who scored an important goal for the second straight week.

Defender Kaleigh Kurtz opened the scoring in the fourth minute, heading in a cross from Debinha after a recycled corner kick, and the Courage never looked back. Kurtz said postgame that she was especially happy with the team’s press, which she felt they finally got right in a way they had not most of the season (she particularly credited the dual Nos. 10 Debinha and Brianna Pinto). The Courage dropped off at times and allowed Louisville’s fullbacks to set a wide shape, but the visitors also found that vacated space on the counterattack.

Nadia Nadim returned to the field for Louisville nine months after tearing her ACL. She entered the game in the 67th minute. Savannah DeMelo and Alex Chidiac showed flashes of danger in Louisville’s midfield, and McDonald rang the woodwork in the first half in addition to the incorrect offside call which stripped her of a goal. McDonald was also frequently isolated up top with a significant gap to the next-closest teammate. The system has worked at times this year for Louisville, and it is relatively effective in mitigating areas of exposure…it just also isn’t one for chasing a game. Will it be sustainable?