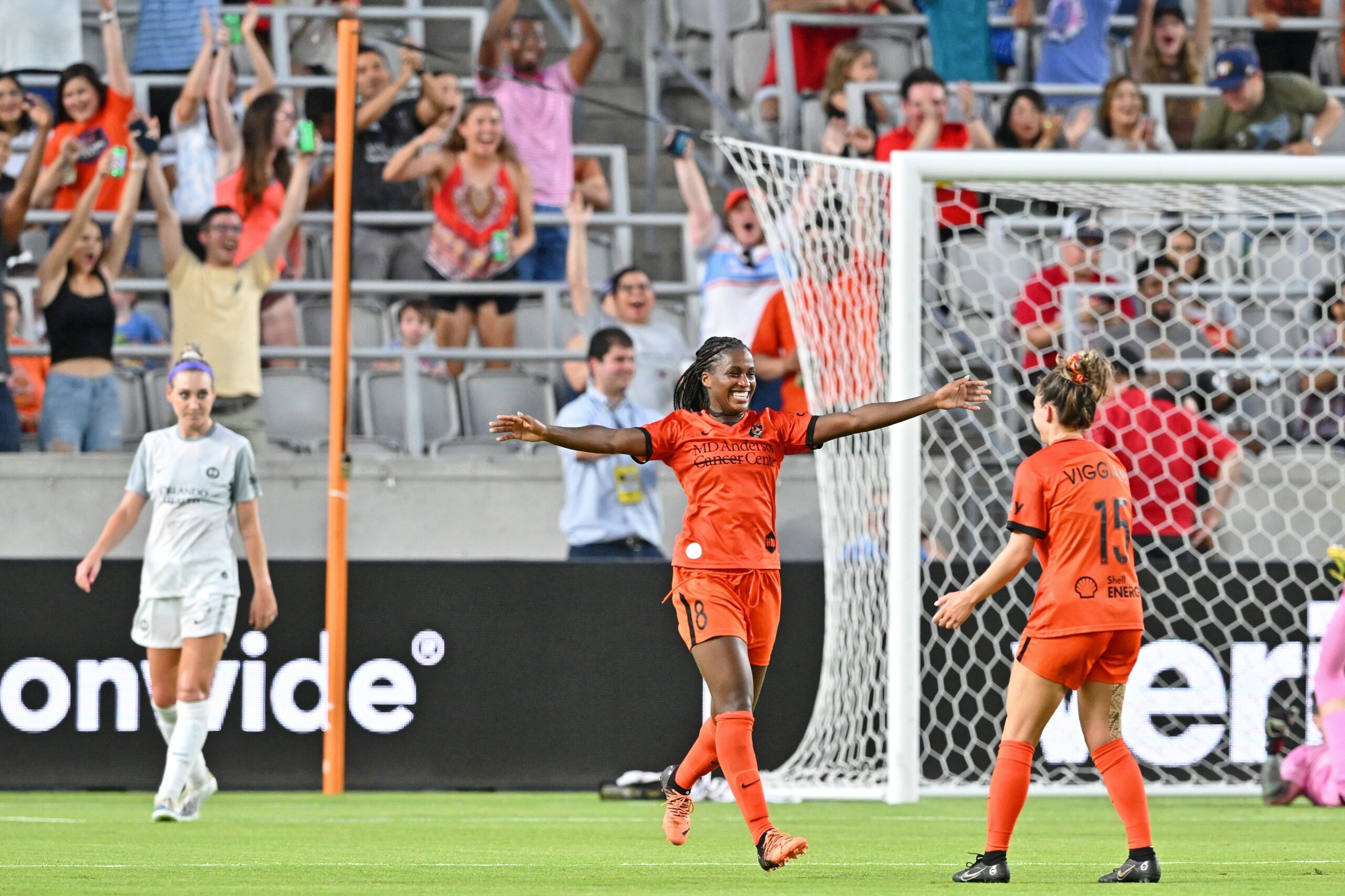 Friday night brought fireworks in the National Women’s Soccer League, starting in Houston and ending in Portland. Here’s what went down:

The Skinny: Nichelle Prince scored the first hat trick in Houston Dash history in a whooping of the Orlando Pride. The Dash are now unbeaten in five straight games since an opening-weekend loss to the San Diego Dash.

One Key Moment: Prince’s third goal, which came four minutes after halftime, was the real backbreaker, but the highlight of the night was Rachel Daly’s diving header and the amazing assist from Maria Sanchez.

Inside the Game: Take a bow, Nichelle Prince. And please join her, Sarah Lowdon.

Prince scored the first hat trick in Pride history in spectacular fashion, and it was a culmination of what has been an impressive season thus far from the Canadian forward. Her first two goals were solid finishes which showed impressive individual effort at the end of a nice team buildup. Prince’s third goal was a brilliant take, pure and simple. She chipped Erin McLeod from close range and at the back post to complete the hat trick and cool off any thoughts that Orlando had about getting back into the game after halftime.

At team level, the Dash are clicking in a way they have not since the magical 2020 Challenge Cup run, which felt like lightning in a bottle under the extreme circumstances of a COVID-19 bubble tournament — especially in retrospect, after a disappointing 2021. Under acting head coach Sarah Lowdon, however, the Dash look like a team with intent and belief. How often have we been able to say that about Houston?

“Unbelievable. I think that was the best we’ve ever played, collectively,” Daly said.

Friday brought another shift back over to the three-back system which earned the Dash a 2-0 win in Portland two weeks ago (they played a 4-2-3-1 last week against the North Carolina Courage). Maria Sanchez plays deeper than expected as the left wingback in that setup, but she was influential in this match as the Dash possessed with a purpose and changed points of play quickly. Daly was everywhere on the day as she dropped into deeper central areas to act as a playmaker, and she had a significant role in four of the five goals.

Orlando entered the match dealing with significant absences due to injuries and COVID-19 protocols, and the Pride’s setup began to show its weaknesses after a decent first 10 minutes or so in the match. Head coach Amanda Cromwell clearly conceded that at halftime (at which point the Pride already trailed 3-0) by making two changes to the back line in addition to changing the system. It didn’t improve the outcome, though, as Prince scored her third only four minutes after the restart. Sydney Leroux and Darian Jenkins remain as points of optimism for Orlando, but there’s no getting around it: this is one of the biggest blowouts we’ve seen in this league.

The Skinny: A very classic Portland Thorns performance, led by the club’s all-time leading scorer in Christine Sinclair, ended in a victory against visiting Angel City.

One Key Moment: Portland’s first goal is simply a thing of beauty. Sophia Smith takes corner kicks now and the service is on point. This was also Kelli Hubly’s first professional goal in 6 seasons with the Thorns, and we are all for center-backs scoring goals here.

Inside the Game: In this case, a classic Portland Thorns performance means, they did not need control of possession throughout the match to win. In fact, they often prefer to strike with a quick counterattack. Angel City controlled roughly 60% of the possession in this game, but when it came to the final third they were lacking as only 2 of their 13 total shots were on target. Portland comparatively created 19 chances, with over half on frame. If you look at just the possession-based stats it seems Angel City should’ve won this game, but the poor quality of their chances tells a different story.

Angel City got hit with a quick one-two punch early in this one as Hubly’s goal 15 minutes in was followed up just two minutes later with another score. Christine Sinclair’s first goal of this match is a great example of how Portland didn’t need to build up through possession. Instead, Hina Sugita steals the ball in her attacking third and immediately sets off the counterattack. Angel City are then out of position defensively and it’s an easy finish for a goalscoring great like Sinclair.

The defense was an issue for the visitors to Portland, and it was costly again in the second half. The third goal is a result of Janine Beckie hustling after a stray pass and delivering the service in so quickly that Angel City are once again caught off guard. So Sinclair got a brace and moved even with Lynn Williams on the all-time NWSL regular season scorers list, each with 57 goals.