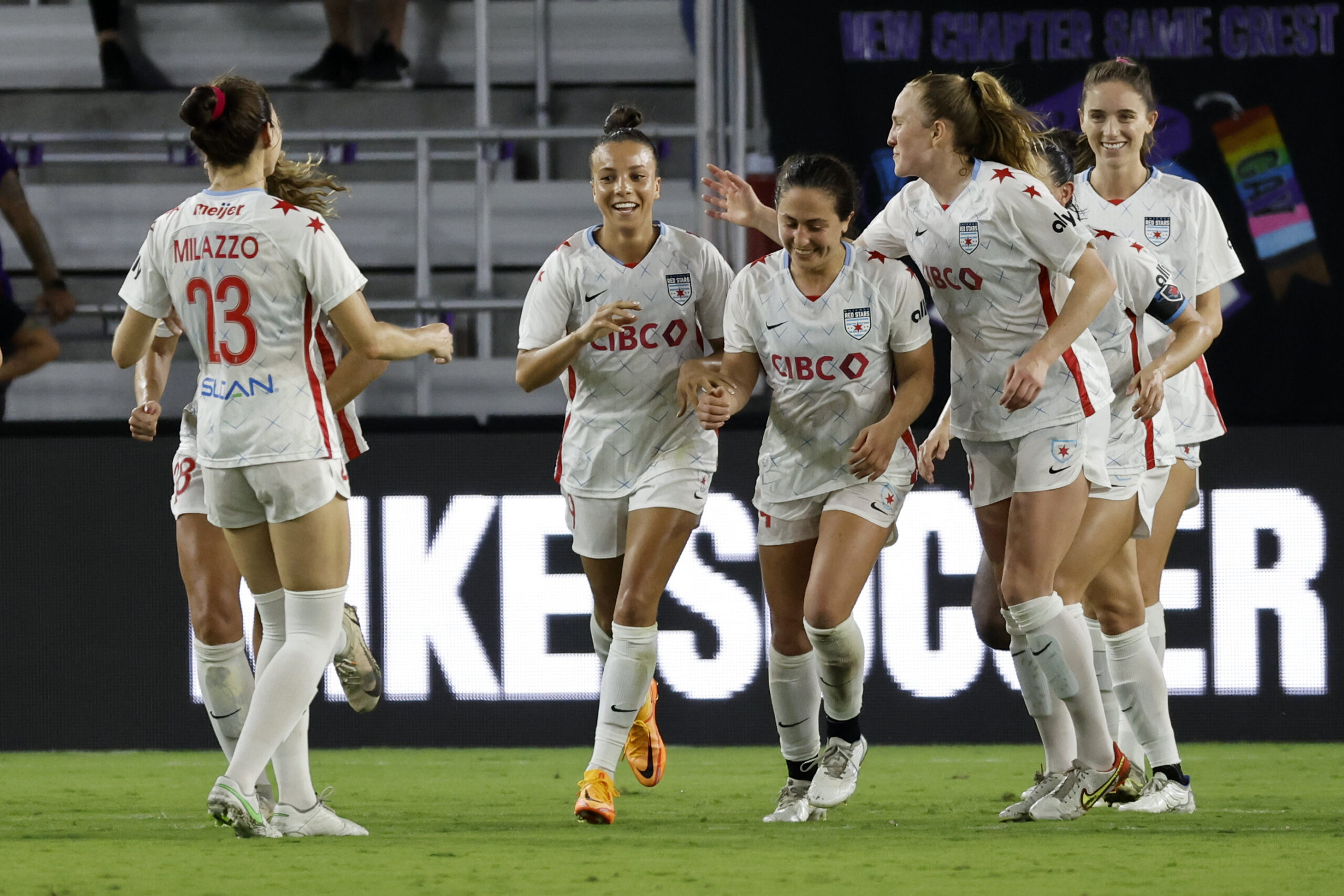 On Sunday, the National Women’s Soccer League continued a soccer-filled weekend with four matches. First, the Wave traveled to North Carolina, where they won on an Alex Morgan classic. Shortly afterwards, Racing Louisville beat Gotham to notch their second win in a row.

The Skinny: The Chicago Red Stars started strong on Sunday night and – despite a late push from their opponents – didn’t look back, as they won 4-2 in Orlando. The win continued the visitor’s dominance over their Floridian counterparts, as Chicago has now won five straight games on the road against Orlando.

One Key Moment: Mal Pugh – who returned to the field on Sunday after being out for over a month with a concussion – made an impact quickly after being subbed on in the second half. When Ava Cook forced a turnover, she fed the ball to Pugh, who made a cheeky through-the-legs pass to Bianca St. Georges, who finished for Chicago’s second goal. Orlando’s carelessness with the ball that plagued them throughout the match is clear in this moment.

Inside the Game: Chicago dictated the tempo early. Momentum from Sarah Griffith’s early goal carried into the second half, when St. Georges and Pugh scored two more goals to put the visitors up by three.

With things all but wrapped up for Chicago, Orlando seemed to wake up with just ten minutes to play. The Pride earned a penalty in the 80th minute, and while Sydney Leroux’s attempt was saved by Red Stars keeper Alyssa Naeher, Orlando got the sniff at goal that they needed. Just a minute later, the Pride earned a free kick, and Amy Turner – who was left completely wide open – managed to head it into the back of the net to make things interesting.

Back at the other end, Pugh scored her second minutes later, when she knocked in her own rebound after Erin McLeod made the initial stop on Pugh’s penalty kick. Orlando then got on the board again – this time a clinical finish from Leah Pruitt after a well-worked feed from Abi Kim – bringing them back within two goals.

But time ran out on the Pride’s attempted comeback, and they had to settle for a loss at home.

Along with the three points, Pugh’s triumphant return must be a sigh of relief for Red Stars fans. The forward finished the match with an assist and two goals in just 45 minutes of play.

The Skinny: Louisville took the early lead and played a calm and organized game, managing to not only shut out Gotham but also win two matches in a row for the first time in club history.

One Key Moment: In the 13th minute, Lauren Milliet found the back of the net after receiving a solid assist from team captain Jessica McDonald. This sharp and early goal showed Louisville’s strength, and set the tone for the majority of the game.

Inside the Game: Going into today’s match, both Louisville and Gotham were thinking about streaks – Louisville was trying to create a winning one for the first time in franchise history, and Gotham wanted to avoid a second loss in a row. Gotham, who has faced some challenges (Covid and otherwise) early on this season, was especially keen on turning the ship around, but from kickoff, it was Louisville who held control.

That control was cemented in the 13th moment, when Milliet scored on a combination play involving at least five of her teammates. From there, Gotham played an uninspiring remainder of the half, until a seven-ish minute sequence right before halftime in which three of Kristie Mewis’s shots on goal hit the crossbar. Unlucky as they were, those last few shots before halftime demonstrated that Gotham had something to prove.

But whatever spirit Gotham found at the end of the first half, they were never quite able to recapture it for the remaining 45. They had a few more shots on goal, including two more that somehow also hit the crossbar, leaving fans wondering if witchcraft was somehow involved in today’s game. But ultimately, the game was Louisville’s for the taking, and they leave New Jersey triumphant, while Gotham continues to struggle to reach their potential.

The Skinny: Despite creating twice as many shots as the Spirit, OL Reign were unable to make those chances count on the scoreboard and this one ended as a hard-fought tie.

One Key Moment: It is difficult to point to just one moment in this game because there was no one big moment. There were instead several medium moments that could’ve won OL Reign the game. This shot from Sofia Huerta in the dying minutes of the game was just one of those moments.

Inside the Game: The home team were undeniably the stronger side in this match, but their inability to convert the numerous chances created will have them feeling they’ve left points on the board for the second game in a row. It wasn’t just the number of chances, which was 20 with 8 being on target, but also the quality of the chances which added up to an xG (expected goals) of 1.78 based on the StatsPerform model. Sofia Huerta was a large part of that success, affecting the offense with her advanced positioning and quality crossing. Credit must be given to Emily Sonnett and Sam Staab who did well to cut out some of the 29 attempted crosses, as well as Aubrey Kingsbury who once again came up huge in net for the Spirit, making 9 saves.

Special mention should be given to Reign’s defensive game plan which severely limited Washington’s chances, particularly the play of Trinity Rodman. NWSL veteran Lauren Barnes, who hit 15,000 career regular-season minutes in this match, had the main task of containing Rodman. Barnes has nowhere near the speed of Rodman, but with her ten years of experience, and some help from her attackers, she was able to deny the service to the young attacker and have her moving backward anytime she received the ball, not allowing her to make any of those runs in behind that are always so dangerous. Alana Cook and Sam Hiatt in the center also played very well to deny Ashley Hatch and any long ball attempts.

The Skinny: In the first-ever matchup between these two clubs, the expansion side earned the victory thanks to Alex Morgan’s goal and effective shutdown of the high octane Courage offense.

One Key Moment: The game-winning goal is an easy choice here. The tally is Morgan’s sixth of the regular season as she continues her red hot start. The initial winning of the ball by Taylor Kornieck in the midfield is demonstrative of the central midfield pressure by San Diego that regularly forced turnovers and disrupted North Carolina.

Inside the Game: The game began slowly as both sides worked to figure each other out but after the first half hydration break both came out with some effective changes. San Diego made a major adjustment in their press that seriously frustrated the Courage by clogging the central areas of the pitch, which particularly limited the crucial play of Denise O’Sullivan and Debinha. This central pressure forced the turnover by Debinha that led to the goal.

The Courage came out stronger in the second half, engaging their high press which left them vulnerable in behind but the Wave were unable to take advantage. The home side created some good chances of their own by Kailen Sheridan was there every time to preserve her third clean sheet of the season. As frustration mounted, and legs got more tired, the Courage simply couldn’t get any control in the last 10 minutes to find an equalizer so San Diego will travel home with all 3 points.