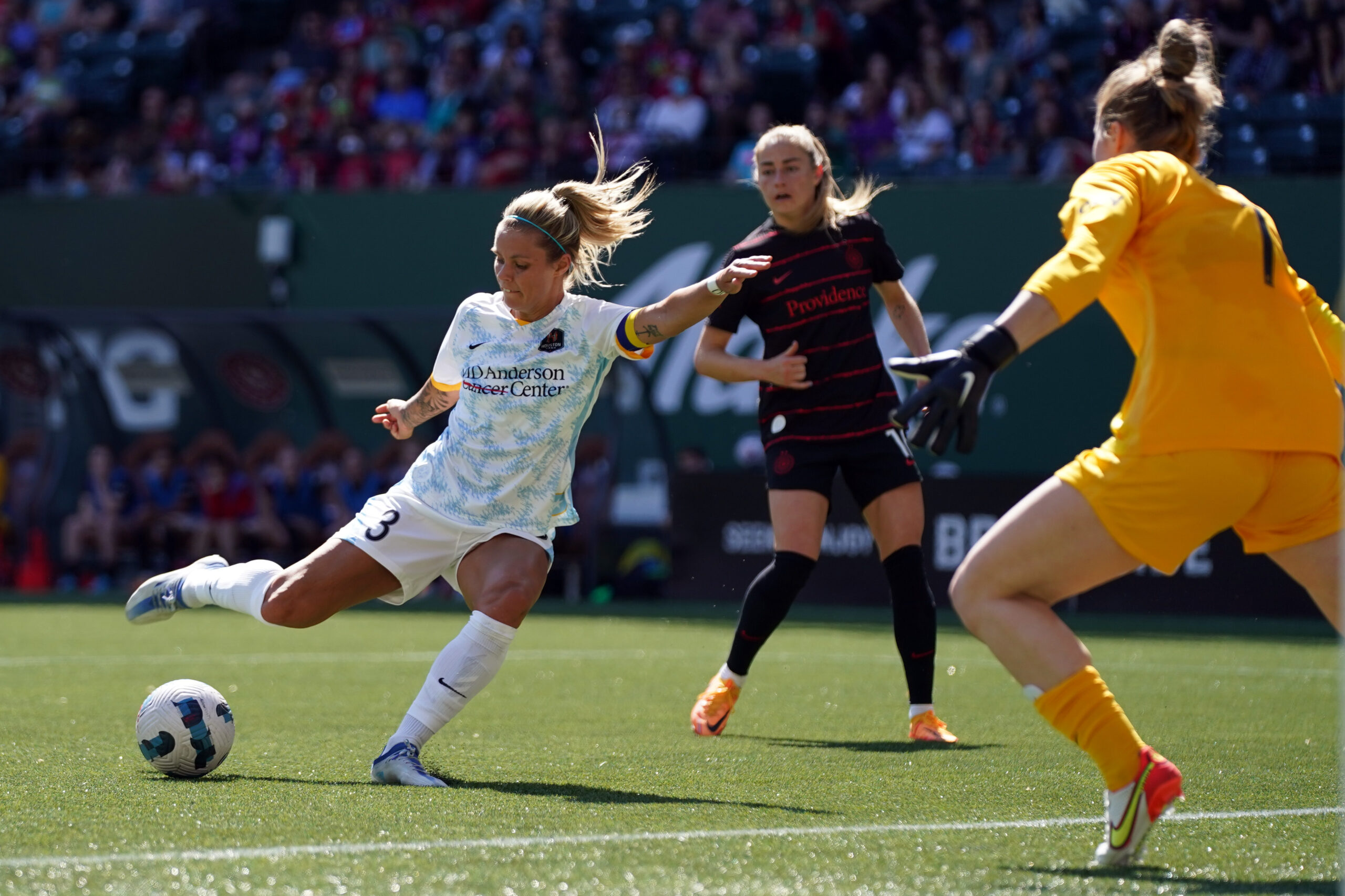 After a thrilling weekend internationally with the UEFA Women’s Champions League Final, the National Women’s Soccer League continued with the soccer-filled day on Saturday, with the Houston Dash surprising the Portland Thorns and Angel City FC taking on the KC Current for the first time ever.

The Skinny: The Houston Dash surprised the Portland Thorns at Providence Park with a rare upset within the fortress, scoring two goals and keeping a clean sheet on the road.

One Key Moment: Both goals were solid, but Sophie Schmidt’s goal took the cake for goal of the game. Schmidt flew down the right side and cut back, passing the ball off to Haley Hanson. After a quick run behind Canadian teammate Christine Sinclair, Schmidt found herself wide open and fired a shot off a tough angle past Bella Bixby.

Inside the Game: The first half was fairly back and forth from both sides. Portland rolled out an unusual lineup to start, Natalia Kuikka and Sophia Smith starting on the bench. They ended up joining the match in the 46th and 65th minute, respectively, for Madison Pogarch and Raquel “Rocky” Rodriguez.

The first half was close to finishing with zeros on the board, but Rachel Daly scored a first-half stoppage time goal. Daly ran into the box and cut her run back, sending Thorns defender Emily Menges flying and face down on the ground. Daly then forced Bixby off her line a little and shot low to the left side of the net.

The Dash picked up a major three points on the road in one of the toughest places to play in the NWSL. Houston is riding a three-game unbeaten streak, tying with Racing Louisville last weekend and topping the Kansas City Current on Sunday, May 8.

Meanwhile, the Thorns have not picked up three points since their April 30 win over the Current. Portland drew in their last two matches against OL Reign and the Washington Spirit.

The Skinny: Angel City earned another hard-fought regular-season win thanks to an unfortunate own goal that came after Kansas City had managed to frustrate the home side for most of the game.

One Key Moment: This own goal is unfortunate and happens to even the best defenders, but credit must be given to Christen Press. The goal was earned by her work rate to go to ground to win the ball, get back up to cross it before it goes over the end line, and have made the defense so unorganized by her attack that they made a costly mistake.

Inside the Game: This game started out fairly even, with the Current’s initial high press causing problems and forcing turnovers. While, Angel City found Simone Charley in behind with long balls over the top, bypassing the press. Kansas City had the better of the first 15 minutes of the match, earning a foul right outside the box. The ensuing free-kick was struck well by Alex Loera and saved by Didi Haracic but also their only on target shot in the entire match. Angel City weren’t allowed to get into a rhythm but Charley caused constant problems as she battled Elizabeth Ball, beating her twice to take high-quality shots inside the box that were well saved by Adrianna Franch.

Kansas City continued to disrupt play and limit Angel City’s chances, but they couldn’t create good chances of their own once they got the ball into the attacking third. After the LA side took the lead they began to dominate the match more and more. They slowed down any attempted transition and used the clock to their advantage while creating a couple more good chances. In the end, the own goal stood as the winner for the expansion side who have now won 3 of their first 4 regular season matches.

Sarah Luebbert on coming back to the Red Stars, NWSL and what she learned in Mexico
NWSL Results: Pugh returns in Red Stars win; Wave shock Courage with victory