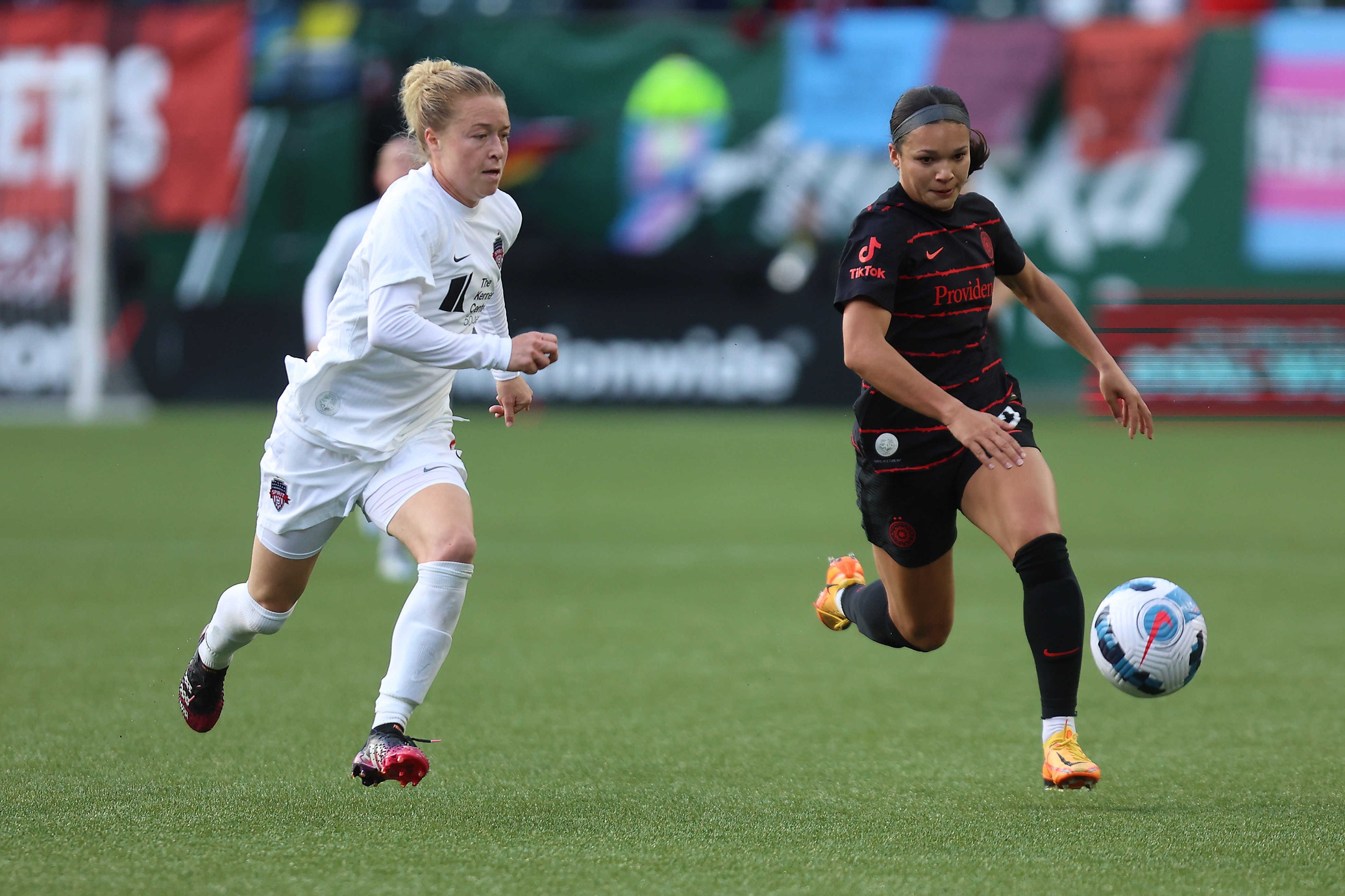 Midweek action commenced in the National Women’s Soccer League on Wednesday night, with Racing Louisville and the Orlando Pride earning surprising wins, while the Washington Spirit ventured out to Providence Park to take on the Portland Thorns, resulting in a draw.

The Skinny: The way Portland and Washington played on Wednesday, you’d never believe this was a regular season game. A 1-1 draw is an accurate depiction of the near-even possession, talent, and hustle from both sides that was demonstrated tonight, making this game an instant classic.

One Key Moment: Sophia Smith’s goal for Portland in the 57th minute was a feast for the eyes, but it was Ashley Hatch’s equalizer for Washington in the 63rd minute that really turned the game from steady and focused to fired up. Though ruled offside, Emily Sonnett’s would-be goal for Washington just moments later showed how much Hatch’s goal changed the tone.

With Portland’s combination of vets like Christine Sinclair and newcomers like Sophia Smith, and Washington’s dangerous attacks from Hatch, Trinity Rodman and Ashley Sanchez, this match was slated to be great nighttime television before it even kicked off. Nothing too dangerous took place in the first 20 minutes – save for a Christine Sinclar shot that hit the crossbar – and by the half, the match still belonged to anyone.

And it would stay that way; however, the intensity would not. In the 57th minute, Sophia Smith found the far left corner and netted a stealthy goal, giving Portland the momentum they needed. But Washington didn’t back on their heels and responded just minutes later, when Hatch sent an equalizer over keeper Bella Bixby’s head. It was still anybody’s game, but for the last 30 minutes, it became a different game. Each side sprinted, hustled, and fought like there was a ring at the end of the game, and the enduring mentality for both sides was simply: GO.

Portland and Washington fought until the very end, but ultimately the match ended in a draw – a result that is both an understatement of how much talent was on the field, and a testament to how well matched these teams were on Wednesday. They both remain in the middle of the NWSL standings and won’t meet again until August 10 – and for true fans of top-tier soccer, that day can’t come soon enough.

The Skinny: Orlando came out of the gate early, scoring and holding the lead through the full 90-plus, and managed to squash a strong comeback attempt by the Courage in the final few minutes.

One Key Moment: In the 86th minute, Brianna Pinto – perhaps one of the NWSL’s most agile players – employed some impressive footwork to net a goal just behind Orlando goalkeeper Erin McLeod and generate what turned into an all-hands-on-deck comeback attempt. Ultimately, the Courage could not equalize, scoring two would-be goals in stoppage time which were called back for offside violations. Pinto’s goal demonstrated that not only do the Courage have a lot of fight, but that the Pride have the power to still see out a result.

Inside the Game: The Challenge Cup, exciting as it may be, clearly creates problems for clubs in the early days of their regular seasons. Because everyone has played so hard so recently, injured lists are full, rosters are shaken up, and COVID-19 still threatens to cancel a game on a minute’s notice. So, in true post-Challenge Cup fashion, the match between North Carolina and Orlando got off to an unexpected start, with Orlando not only seizing the lead with a 4th-minute goal from Sydney Leroux, but doubling their lead by the end of the first half on a beautiful Leroux-Mikayla Cluff combo. Despite some impressive attempts by North Carolina’s Debinha, the Courage finished the first half looking half as capable as they did when they won the Challenge Cup just a few weeks ago.

The majority of the match’s second half featured more or less of the same – a decent amount of back-and-forth action, with impressive runs by both Leroux and North Carolina’s Carson Pickett — who made her 100th NWSL appearance — sprinkled in. There wasn’t too much to write home about until the Pinto found the back of the net in the 86th minute.

Suddenly, the Courage turned their engines on, and the final four minutes of regular time plus six minutes of stoppage time turned into utter chaos. For 10 minutes, the Courage played the offensive game reminiscent of their Challenge Cup performance, and ultimately had two attempts ruled offside before the final whistle blew.

Although the result may come as a surprise to NWSL fans, it’s too early yet to see if it was a fluke. Orlando will have another chance to prove itself against Chicago this weekend, and North Carolina has a few days to rest before they take on league-leaders San Diego.

The Skinny: Racing Louisville earned their first win of the NWSL regular season with a 1-0 victory over the San Diego Wave, courtesy of a game-winner from Savannah DeMelo.

One Key Moment: If the words “gorgeous soccer” were in the dictionary, this goal would be the definition. Savannah DeMelo scored off a rocket of a free kick, but the best part was the trickery that got the San Diego defense and goalkeeper Kailen Sheridan. Louisville midfielder Jaelin Howell skipped over the ball to fake taking the kick, and DeMelo fired the ball toward goal. Sheridan got a fingertip on it, to her credit, but there was too much power on the ball to not find the back of the net. This goal is highlight-reel worthy.

Inside the Game: DeMelo’s goal is only the second San Diego has given up so far in the regular season. Granted, it’s early, but a win for Racing over a team that has come out of the gate with plenty of promise — the Wave — is a big deal. Racing head coach Kim Björkegren has some promising young talent on this roster, and he’s going to build and grow that talent throughout the year.

Both goalkeepers were busy throughout the evening, with Sheridan making five saves while Louisville’s Katie Lund had four saves to her name. San Diego’s best chance came late in the second half off an attempted header that went just wide of Lund.

The match was as even, with Louisville having the slimmest possession advantage of all time: 50.1% in their favor.

Of note for San Diego were a few lineup changes — due to the midweek action — and some personnel on the field and on the sideline. Head coach Casey Stoney missed this match due to a positive COVID-19 diagnosis. Rich Gunney, an assistant, served as the acting head coach in Louisville. Meanwhile, Tegan McGrady had to come off in the 17th minute with an unknown injury, and Mia Gyau took her place.

Anatomy of a Goal: How not to defend Christen Press
Sarah Luebbert on coming back to the Red Stars, NWSL and what she learned in Mexico