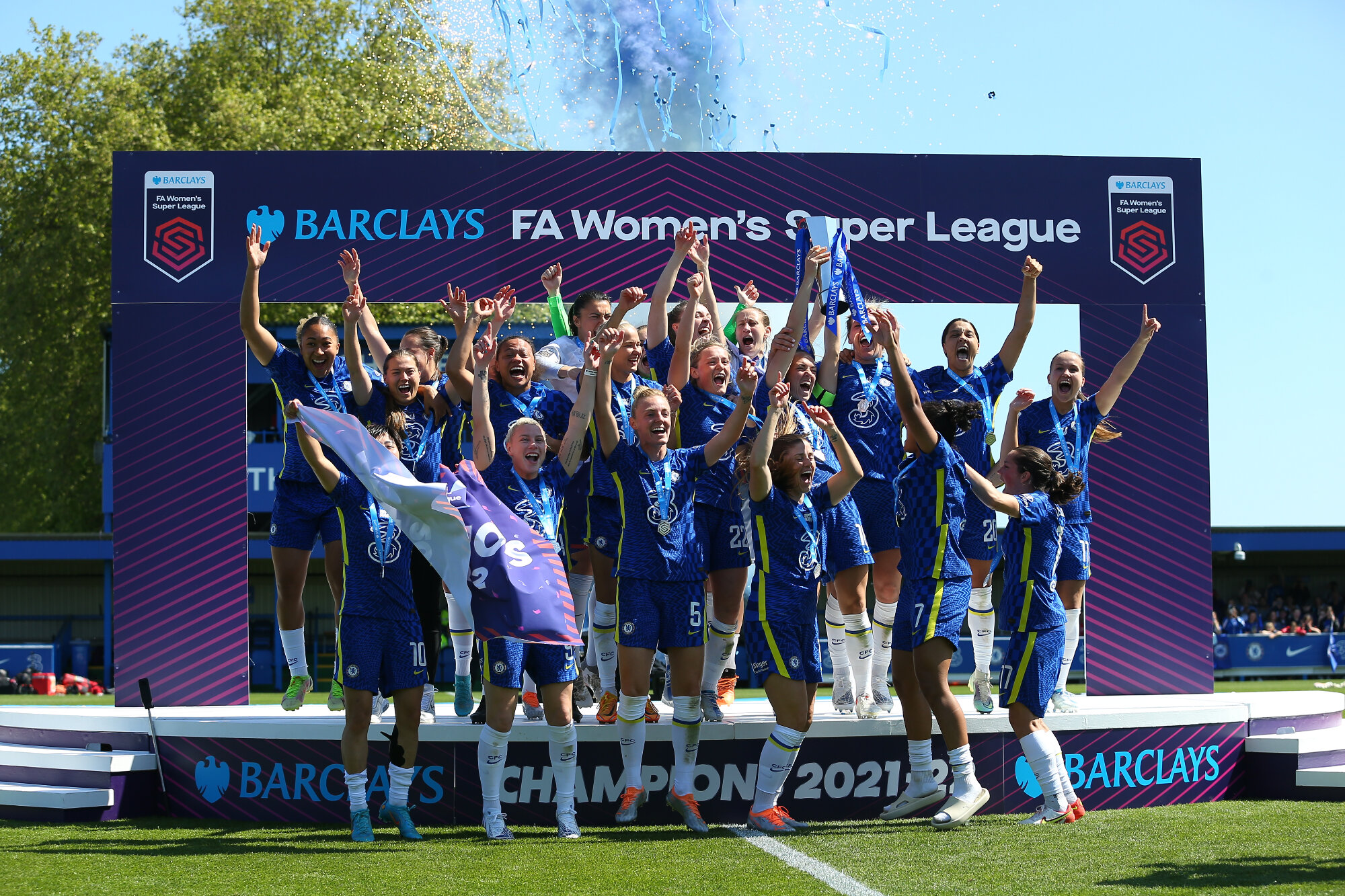 Chelsea are FA Women’s Super League winners for the third year in a row!

With Chelsea leading Arsenal by just one point coming into decision day (and Arsenal ahead on goal differential), the Blues needed a win to be crowned as winners.

But they didn’t make it easy early, as Manchester United lead the match on two occasions at Chelsea’s Kingsmeadow Stadium before the Blues roared to a comeback.

Catch up on all of the highlights and news from the dramatic last day of FAWSL action.

Manchester United took the lead just 13 minutes into the match on Sunday, when a header by Martha Thomas beat Ann-Katrin Berger.

Chelsea equalized quickly through a superb strike by Erin Cuthbert, but a first-time volley by Ella Toone put United back into the lead before halftime.

As things stood at the halftime break, with Chelsea losing and Arsenal level nil-nil with West Ham, the Gunners would have captured the title. But back at Kingsmeadow, Sam Kerr and Guro Reiten had other ideas.

Just 45 seconds into the second half, Sam Kerr opened the floodgates for Chelsea. United couldn’t clear an errant ball into their box, and Kerr’s acrobatic volley landed perfectly on target for the equalizer.

With Arsenal now leading West Ham 1-0 back in London, a draw for Chelsea wouldn’t be enough.

But just five minutes after Kerr’s equalizer, Guro Reiten came to the rescue and put the Blues ahead for the first time on Sunday. A lovely through ball from substitute Ji So-Yun fed Pernille Harder, who crossed to Reiten for the tidy finish in front of goal.

Finally in the lead, and in position to secure the title, Chelsea scored one last insurance goal, and it was Kerr once again. Saving her best bit of skill for last, Kerr brought the ball down with her chest, and – while turning towards goal – volleyed it up and over an out of position Mary Earps.

Chelsea now firmly had their hands on the FAWSL trophy and soared to the 4-2 victory. As for Kerr, she finishes the season as Golden Boot winner, with 20 goals in 20 matches played.

Arsenal turned on the charm in the second half with goals by super sub Stina Blackstenius (her first touch of the match!) and a rocket from Steph Catley. The win secured Arsenal three points, but Chelsea’s win meant it wasn’t good enough for the title.

With her contract up and no trophies to show from the season, Gooners have been left wondering if Sunday was the last time they will ever see Vivianne Miedema in an Arsenal shirt.

Goals from Lauren Hemp, Bunny Shaw, Ellen White, and a penalty by Alex Greenwood earned Manchester City the 4-0 win over Reading on Sunday, and secured third place – and the much coveted final Champions League spot for next season. After a disastrous start to the season that saw City sitting in ninth place in week seven, the Citizens will be pleased with their months-long comeback.

Tottenham Hotspur 1, Leicester City 0 — Spurs finished the season on a high on Sunday at Tottenham Hotspur Stadium, when Ashleigh Neville got her head on the end of Jessica Naz’s cross for the second half winner. Neville was crowned Spurs Player of the Season after the match. Though they fell short of the goal of a Champions League spot after challenging early in the season, Tottenham’s fifth place finish is their best ever in the FAWSL.

Brighton & Hove Albion 1, Everton 1 — Brighton and Everton traded goals during a five minute period in the second half on Sunday. A powerful strike into the upper 90 by Nathalie Björn gave Brighton the lead, but Aileen Whelan knocked in a rebound off of the crossbar to equalize for Everton shortly after. Both squads finish this season lower than they finished the last, with Brighton slipping one spot to seventh, while Everton’s fall – from fifth last season to tenth today – was much more dramatic.

Aston Villa 0, Birmingham City 1 — Birmingham, who are set for relegation to the Championship, finished off their time in the FAWSL with three points over Aston Villa. Veatriki Sarri had the decisive goal.