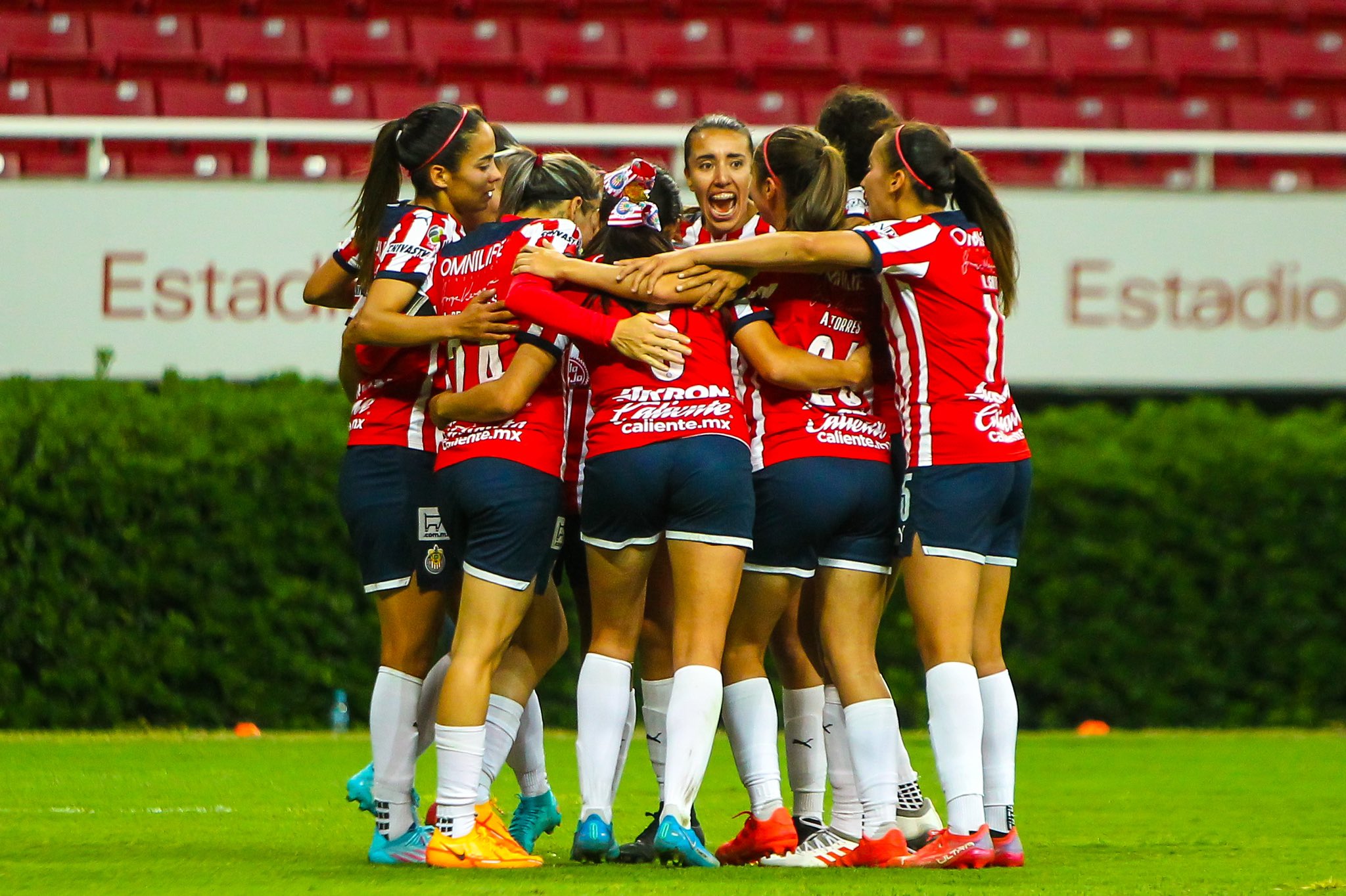 The Liga MX Femenil playoffs are set! The Liguilla kicks off tonight at 6 PM ET with Atlas hosting Tigres. There are eight clubs taking part in the tournament, looking to dethrone C.F. Monterrey, who won the Apertura in the fall.

We’ve been covering the league all season, keeping you up to date with all the ups and downs, and, of course, all of the goals. Take a look at the eight teams competing and what their chances are in the Liguilla. We will start from the bottom, with the eighth place side, Tijuana.

In the Week 17 recap, I wrote that Club Tijuana has been the wildcard team this entire season. Tijuana finished the regular season with a 4-4-9 record, with a staggering nine points coming from draws. They essentially limped their way into the playoffs with a last-second win against FC Juarez on Monday night.

Uncharacteristically for Tijuana, Mexican women’s national team striker Renae Cuéllar did not crack into the Top 10 in the Golden Boot race. Cuéllar finished the Clausura with seven goals in 15 games. Tijuana has also struggled in the back, at times, and are adjusting to having Alejandra Gutiérrez in goal to replace Itzel Gonzalez, who is on loan in Spain with Sevilla.

Tijuana fits the category of teams that are great when they are playing good, but downright bad when they’re off. Xolos making the playoffs by the skin of their teeth made for great entertainment. Can they provide the upset, once again, over C.F. Monterrey?

This matchup gives Tijuana a bit of hope. Yes, they are facing off with the defending champions, but Tijuana and C.F. Monterrey took on each other back on March 21, with Tijuana giving Rayadas their first loss of the season. The two legs could hurt or help Tijuana, but Xolos remembers that Week 12 match where they silenced the league.

Pumas was the other team that had to claim their playoff spot in Week 17. They certainly did themselves a favor with a win over Toluca. Pumas actually knocked Toluca from seventh place to 10th place. Pumas finished the regular season with a 6-7-4 record, posting the most losses from any of the eight playoff teams.

Stephanie Ribeiro led the way for Pumas with five goals. Pumas’ effort in front of goal hasn’t been smooth sailing this year, with forwards scoring a combined nine goals — the other four being scored by four different players. The pressure of offense has laid on the shoulders of Ribeiro. However, Aerial Chavarin has led the way in the midfield, and defender Marylin Díaz has provided plenty of offensive support.

Pumas will have their hands full taking on Chivas — especially with Golden Boot winner Alicia Cervantes facing down the defense. However, if Ribeiro can find her footing and net a goal or two in the first leg, and keep Cervantes off the scoresheet, it could provide Pumas with a much-needed boost.

If you would have told me Atlas would qualify for the Liguilla in the beginning of this Clausura campaign, I would have shuddered at the thought. Good on Atlas for proving me, and a lot of other cynics, wrong. The departure of Alison González was always going to hurt the team — she joined Club America during the small transfer window, but hasn’t played yet due to injury.

However, Atlas managed to score 27 goals this season, with Adriana Ibarra leading the way with nine. Claudia Ibarra Muro followed behind with four goals. Verónica Pérez is the leader of this Atlas team, and has four goals this Clausura season.

Atlas has been a fairly consistent side this year, starting their campaign strong with a flurry of wins and draws. They finished with a 7-4-6 record and have been a quiet team this season, with no real standout superstar like Gonzalez was. Atlas didn’t get a friendly matchup in the first round, taking on Tigres. However, don’t be surprised to see Atlas, who host the first leg, give Tigres some frustration.

Charlyn Corral has been a wonder for this team. She joined Pachuca for her first stint in Liga MX Femenil after spending her career overseas in Finland and then in Spain with Levante and Atlético Madrid Femenino. In her first full season in Mexico, Corral has been a revelation for Pachuca, and even finished the season with 13 goals and second in the Golden Boot race.

Pachuca, just like Atlas, quietly slid up the table. In the Apertura, Pachuca finished just below the playoff cut off, being edged out by Cruz Azul. This time, the script was flipped and Pachuca finished in a much higher position, in fifth place, with a record of 9-5-3.

But after a hot start to the season, Pachuca has faltered in their last few matches. Pachuca’s last win came against Mazatlan on March 28. Since then, the team has dropped points in two draws and had two big losses against C.F. Monterrey (5-0 for Rayadas) and Club América (4-0 for América).

Heading into the playoffs, Pachuca will take on Club América once again. All eyes will be on the first leg, where Pachuca hosts, to see if they can use their home field advantage and score goals. Keep an eye out for forward Esbeydi Salazar, who scored four goals during the regular-season, as América will likely put heavy coverage on Corral.

Club América picked up Katty Martinez and Alison Gonzalez in the small break between the Apertura and the Clausura. It’s quite incredible that a team picked up two of the most prolific goal-scorers in Liga MX Femenil. During the regular-season, Martinez scored her 100th goal in Liga MX Femenil competition — and she’s only 24-years-old. Now, Martinez has 109 goals to her name, with 14 coming during the 2021 Apertura and 2022 Clausura.

As mentioned, Gonzalez is out with injury, but when Club América gets her back, look out. But, right now, we’re focused on this season and Club América’s fourth-place finish. Liga MX Femenil is a tough league. When you look on paper, you would think that Club América would be a first-place team. Club América did improve by one spot, as the club finished in fifth place during the Apertura.

América has had issues this season with injuries, as Sarah Luebbert was out for a period of time and recently returned. Their manager, Craig Harrington, has also found himself in controversy this season after berating players from C.F. Monterrey. Club América ended the Clausura with a 11-2-4 record.

On the field, Club América has looked strong. Martinez finished the Clausura with nine goals, while Scarlett Camberos stunned the Golden Boot table with 11 goals. Needless to say, there’s no question that América is lethal in front of goal. On defense, a few own goals have plagued Janelly Farias, but the tandem of Farias, Jocelyn Orejel, Kimberly Rodríguez and Karen Luna have been stalwarts, only allowing 14 goals.

The four-time tournament champions, Tigres was stunned in last year’s Clausura final by Monterrey, giving Rayadas their second title. This year, Tigres showed that they really can be human. Although they didn’t lose any games, Tigres did have six draws, finishing with a 11-0-6 record.

Tigres had a tough stretch down the final few matches, drawing with Monterrey and Club America. However, this is still a dominant Tigres team. They will be without star defender Bianca Sierra in the first leg, as she has been suspended by the league for a foul against Martinez in the Tigres-America Week 17 draw.

However, this is a team jam-packed with talent. Stephany Mayor scored 11 goals in the Clausura while Nigerian international Uchenna Kanu — who joined Tigres in January as the “replacement” for Martinez — scored 10 goals. Tigres also benefited from American prospect Mia Fishel joining the club after being drafted by the Orlando Pride. Fishel made an immediate impact and scored eight goals.

Tigres is a tough team, but losing Sierra will certainly hurt the defense in Thursday’s match against Atlas. Depending on what Atlas does in Leg 1, this could turn into a major slugfest.

Bow down to Alicia Cervantes. The 28-year-old has been on fire for both club and country, and took the Golden Boot trophy with 14 goals. Cervantes is clearly the player to watch as Chivas heads into the Liguilla, but she’s not the only one with a knack at scoring goals.

Joseline Montoya and Susan Bejarano will be heavily relied on to take some of that pressure off Cervantes. Teams know by now to put two or three players on the leading goal scorer. Caro Jaramillo was the player who scored the game-winning goal against Monterrey in Week 17 to stun the Apertura champions. Jaramillio had four goals this season as an offensive midfielder.

On defense, Chivas has been stellar this year, only allowing six goals past Celeste Espino. That’s the fewest goals allowed in the Clausura and the only team to have single-digit goals scored against them. Chivas joined Tigres as one of two teams to not lose any matches this season, with a 13-0-4 record.

Chivas is a fun team and Cervantes weaves her way into space like she’s invisible. Of course, Pumas is going to flank a ton of defenders around her. Goals are what teams need in the playoffs, and Chivas will need some of their other attacking midfielders and forwards to pick up the load if Cervantes can’t edge out her defenders.

Monterrey was so close to notching a perfect season. Rayadas finished with this season with a 14-2-1 record. The two losses came against Tijuana and Chivas, both playoff-bound teams. The Chivas result is a little less shocking, with Guadalajara being dominant and giving Monterrey a good fight for the first-place spot all spring. Meanwhile, the Tijuana loss came at a shock. Turns out the big teams can lose every once in a while.

Mónica Desiree Monsiváis was the top Monterrey goal-scorer this season, with nine goals. In the Clausura, Rayadas scored a staggering 51 goals, with Tigres being behind them with 43 goals. The goals were all spread around, as Christina Burkenroad scored seven goals, Daniela Solís netted six goals, Aylin Aviléz tallied five and Diana Evangelista notched two goals — just to name a few.

Alejandría Godínez has been a top goalkeeper and made headlines with her penalty saves against Tigres in the Apertura final. Monterrey will need her to be on top of her game against Tijuana, especially on the road in Leg 1.

Will the two legs benefit Monterrey against Tijuana, the team who gave them their first loss of 2022? Or will Tijuana find the right spots to frustrate and expose Rayadas?

There are the eight team-by-team previews ahead of the Liguilla! Who do you think will lift the Clausura trophy? Let us know in the comments!

*All Times in Eastern Time. Games will air on VIX streaming.

Thursday, May 5: Pachuca vs. Club America at 8 PM

Sunday, May 8: Club America vs. Pachuca at 1 PM