FAWSL Week 21 Roundup: Chelsea one win away from WSL title 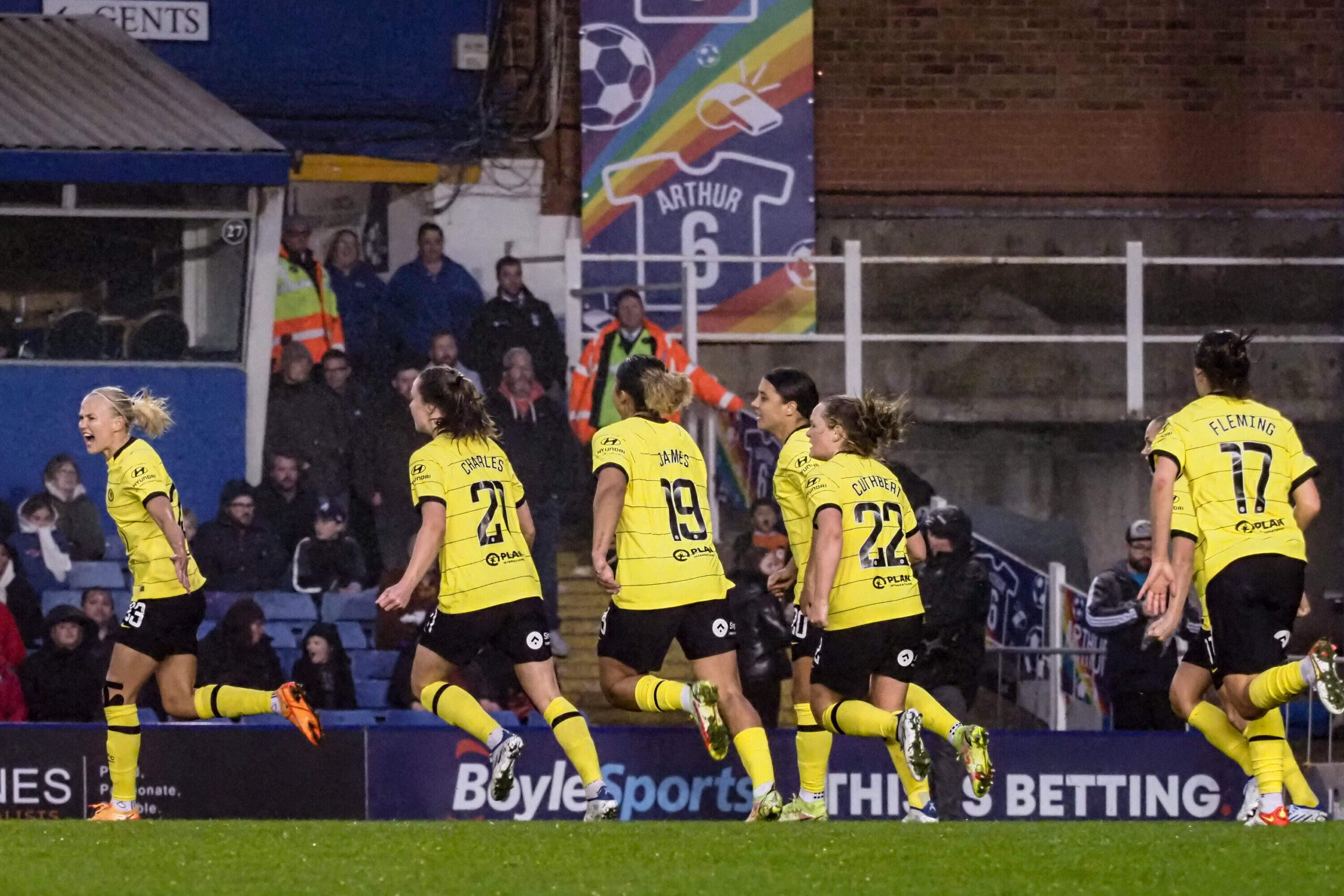 The penultimate weekend of FA Women’s Super League action saw Chelsea squeak out a late win against Birmingham to remain on course to win a third-straight WSL title.

All eyes will be on the top two this week. Arsenal, who sit four points behind Chelsea with two matches to play, still need the leaders to falter in their last match against Manchester United to have a chance. If Chelsea win, they will hoist the trophy in front of their home fans.

Read on for all of the week’s results and player news.

Chelsea were not at their best on Sunday but managed to earn the three points late to stay in the driver’s seat.

Some resolute defending from Birmingham – and a good bit of luck too – kept the match scoreless through 70 minutes, though Chelsea weren’t without chances. Pernille Harder sent a driven shot just wide of goal in the first half, and a Sam Kerr attempt pounded off the crossbar shortly after.

But drama ensued mid-way through the second half. Jonna Andersson hit a cross through Birmingham’s penalty area, where it was redirected towards goal by Niamh Charles. But the ball hit Birmingham defender Lisa Robertson’s hand, and the referee signaled to the spot. Though there was quite the debate over the penalty call, a defender just can’t have the ball hit their outstretched hand like Robertson did and not expect the whistle to be blown.

Harder made easy work of the penalty, hitting it cleanly into the bottom corner past keeper Emily Ramsey for the win.

Ji So-Yun departs Chelsea — South Korean superstar Ji So-Yun will leave Chelsea at the end of the season after eight years with the club. The midfielder was the first South Korean to play in the WSL, and made 208 appearances for Chelsea, scoring 68 goals. Chelsea’s release noted that Ji expressed interest in “heading back to South Korea to be closer to home following the end of her contract.” In a tweet on Sunday, teammate Fran Kirby said that Ji is “the best player I’ve ever had the privilege of playing with.”

Anita Asante announces retirement — In more player news, England legend and current Villa defender Anita Asante announced her retirement on Tuesday. Asante earned 71 caps for England and featured in two World Cups, three European Championships, and an Olympic Games, and captured numerous club trophies around the world. We could describe all of her achievements in the game here, but we’ll let you hear from Asante herself on the impressive list:

Fran Kirby’s on her way back — After being out for a number of months with undiagnosed fatigue, Fran Kirby’s return to the field seems to be on its way. The encouraging news came from Chelsea boss Emma Hayes after the team’s win on Sunday. Speaking with Sky Sports, Hayes said: “She’s feeling better, and finding a little more strength every day, and managing that fatigue. So she’ll be on the grass next week. I think that’s progress, and certainly gives us optimism for the future, and I’m so delighted for her because it’s been a tough time.”

Manchester City 7, Brighton & Hove Albion 2 — Bunny Shaw put four goals past Brighton on Saturday en route to City’s 7-2 victory. Brighton managed to score two of their own in the first half, but couldn’t keep pace in the second 45′.

Manchester United 3, West Ham United 0 — Goals from Martha Thomas and Leah Galton (and a West Ham own goal) earned Manchester Untied the three points on Sunday. With the win, Untied are still hanging onto third place (and the final Champions League berth), but Manchester City are just one point behind, and have a game in hand. It all comes down to the final week!

Arsenal 7, Aston Villa 0 — Arsenal put together an impressive performance on Sunday at home to rout Aston Villa 7-nil, with Nikita Parris scoring her 50th WSL goal en route to the win. But enthusiasm for the victory was dampened late in the match, as substitute Jordan Nobbs only lasted 12 minutes on the pitch before she had to exit due to an injury. She was in tears as she left the field applauding to fans.

Leicester City 0, Reading 0 — Leicester earned an important point on Sunday against Reading. The nil-nil draw gave Leicester additional breathing room away from the relegation zone, as they now sit in second last place, but have five points on last-place Birmingham. Birmingham will now need a win from both of their final matches – against Manchester City and Aston Villa – to have a chance of staying in the WSL, assuming Leicester pick up no additional points.

Chelsea 2, Tottenham Hotspur 1 — Three first half headers told the tale last Thursday at Kingsmeadow in London. A Bethany England header opened the scoring for Chelsea early, but Kerys Harrop brought things level in the 44th minute when a header of her own beat Chelsea keeper Zecira Musovic. But just moments later – in first half stoppage time – Sam Kerr got on the end of a cross from Pernille Harder for the winner.