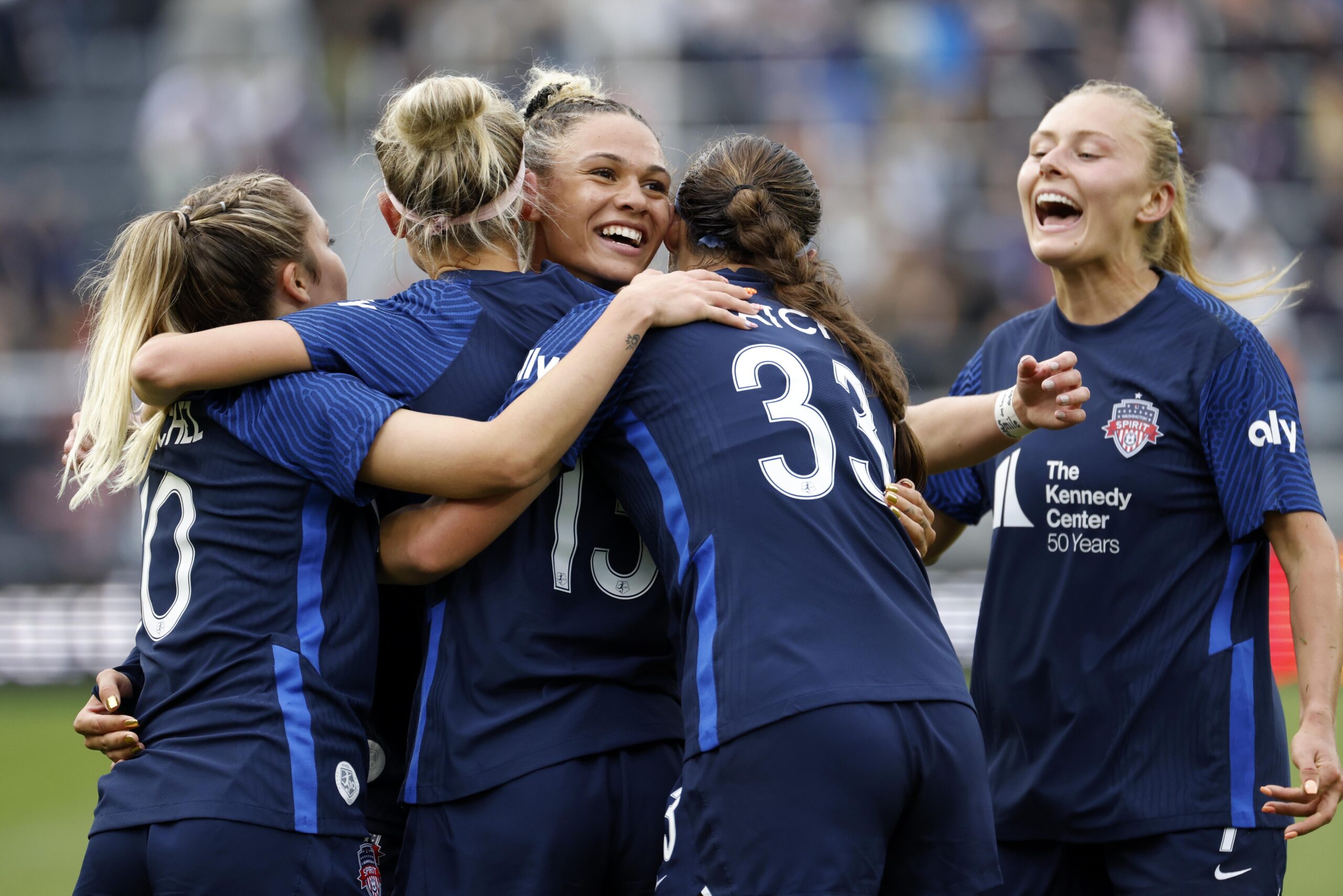 Championship rings were dished out on Sunday in Washington, D.C., and the regular season officially arrived to kick off a bizarre week even by the National Women’s Soccer League‘s standards. The Washington Spirit defeated OL Reign, 2-1 in the first of two meetings in four days, ahead of Wednesday’s Challenge Cup semifinal.

The Skinny: Ashley Sanchez and Ashley Hatch each scored for the Spirit to extend their unbeaten streak to 19 games, all since Kris Ward took over as acting coach in August (and minus the two forfeits last season for COVID-19 protocol violations).

One Key Moment: Hatch came through again for a game-winner that gets the Spirit off to the start they needed this season, and set the tone for Wednesday. It’s no small feat that Hatch beat Alana Cook to that ball like she did, either.

Inside the Game: Even accounting for Rose Lavelle seeing her tame penalty kick saved in the 9th minute, OL Reign was lucky to get to halftime only down 1-0. Reign goalkeeper Phallon Tullis-Joyce made nine saves in the first half, several of them spectacular, to keep her team in a game in which they were dominated through the opening 45 minutes and most of the full 90. The Spirit set the tone, winning the ball back in high areas as the Reign tried to play out, and forcing the visitors’ midfield and back line to make low-percentage passes. It was a masterclass performance from the defending NWSL champions. The biggest criticism was they only finished one of their several great opportunities, but Tullis-Joyce deserves credit there.

The Reign started the match with Quinn on the bench, no doubt in anticipation of Wednesday’s Challenge Cup semifinal, and that was at least a small part of why the Spirit found so much success in midfield. But Ward implemented some mild rotation of his own and didn’t start captain Andi Sullivan in midfield. Still, the Spirit’s depth was on display.

Hatch, Sanchez and Trinity Rodman were their usually dangerous selves in that fluent attacking trio, and Anna Heilferty played a significant role on Sunday, too, assisting Sanchez’s opener as part of intuitive movement among the Spirit. Sanchez was electric on the day, consistent with her performances over the past eight months which have led to her getting significant looks from Vlatko Andonovski for a place with the United States.

Lavelle redeemed herself by scoring the equalizer eight minutes after halftime, but the 2-1 result was flattering to the Reign on the day. The Reign and Spirit are the two best teams in the league right now, and Washington made the gap look pretty significant for at least one day. Wednesday will likely tell a different story, regardless of the result.

The Skinny: Gotham shrugged off their rough Challenge Cup performances to start the regular season with a bang, while Orlando continued to have the same struggles that plagued them since March.

One Key Moment: The first goal of the match scored by McCall Zerboni set off a quick scoring spree from Gotham that made an Orlando comeback impossible. While the service from Kristie Mewis was quality, the Pride did not defend the set piece well.

Inside the Game: The Pride had a fairly strong showing in their home opener but couldn’t put away their chances, while Gotham’s scoring magic returned. This is highlighted in the match stats, as Orlando attempted 16 shots with only 25% landing on target, while over half of Gotham’s shots were on target and only one didn’t result in a goal. If you look at the xG (expected goals) based on StatsPerform model, Gotham should’ve barely scored a goal, but instead they remarkably scored some low percentage chances. Part of that was Orlando’s defending which continues to be a weak spot for them.

Shortly after the restart from the first goal, the Pride attempted a high press to win the ball in their attacking half, but this left ample space in behind which Margaret Purce took full advantage of. It was skillful on her part to round the keeper and finish as she did, but when playing a team with Ifeoma Onumonu and Purce up top you can’t allow those balls into space.

The third goal was once again good skill by the goalscorer, Kristie Mewis, but how she had so much space in the opposition box to settle a lofted cross and then take several touches before shooting is a mystery.

Orlando created lots of chances, but were simply unable to take advantage of the opportunities they created, even inside the opposition box.

The Skinny: Though the Dash recorded more shots, a late goal gave the Wave their first regular-season win in franchise history on Sunday night in Texas.

One Key Moment: Just as the match looked to be headed for a draw, some savvy off the ball movement from Jodie Taylor gave San Diego the win. In the 86th minute, Wave substitute Mia Gyau sent in a cross towards the penalty spot where Katie Johnson managed to rise above her defender to redirect the ball towards the back post. Taylor – who expertly slipped behind defender Katie Naughton – volleyed the ball past Jane Campbell for the winner.

Inside the Game: Despite missing captain Abby Dahlkemper – who stayed in California due to a COVID all-clear that came too late – San Diego managed to grind out the result on Sunday.

As for the Dash, the late loss continued a rough week that started with head coach James Clarkson’s suspension on Tuesday night. With assistant Sarah Lowdon at the helm, the Dash managed a number of good chances on goal, but the finishing was notably lacking. Rachel Daly’s chance before halftime was the clear standout in this department. Unmarked on the penalty spot with most of the goal open, Daly rung her shot off the crossbar. It was that kind of night for the Dash.