Liga MX Femenil, Clausura Week 16: And then there were six! 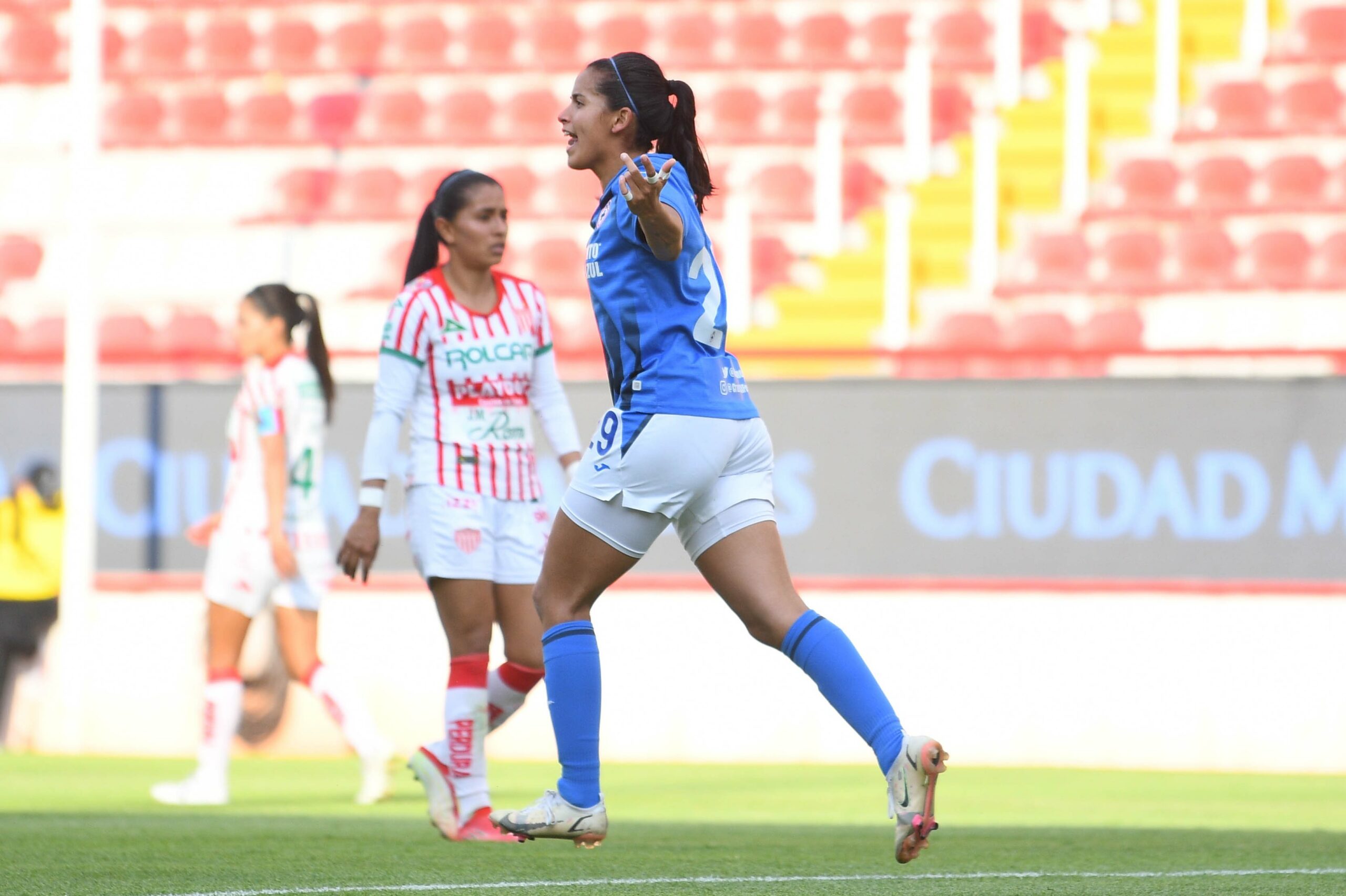 Just like that, the Liga MX Femenil season has one more week left in the Clausura regular-season. It’s down to six teams — Toluca, UNAM Pumas, Club Tijuana, Cruz Azul, Querétaro and Atlético San Luis — for the final two playoff spots after some shuffling occurred on the table this weekend.

Toluca didn’t do themselves any favors with a draw against Club Leon — in a match they should have won — while Club Tijuana potentially ruined their chances of a playoff spot with a loss to Mazatlán.

Take a look at what happened this weekend and playoff scenarios for the final two spots.

Sonia Vázquez, take a bow. The 25-year-old midfielder scored the lone goal in a much needed 1-0 victory over Puebla. Vázquez tapped in the goal after her teammate Mariana Díaz Leal did most of the work, collecting the ball off a throw-in and edged out her defenders to cleanly slip the ball over to Vázquez. Querétaro hasn’t performed positively in the last few weeks, but they still remain in playoff contention. This was a massive three points for Gallos as they prepare for a big match against Atletico San Luis.

Querétaro Playoff Scenario: This one is a LONG shot, but it can happen (technically). Gallos can clinch a playoff spot if Pumas loses, Tijuana loses, Cruz Azul loses and Atletico San Luis loses. Right now, Querétaro has the worse of the goal differentials (-11), so they would need a lot of results going their way.

Talk about a comeback — in more ways than one! After losing their last two games, Cruz Azul earned a big three points over Necaxa, putting them in the 10th place spot with a chance for the playoffs. Ana Lozada kicked things off with a goal on the road in the 10th minute, scoring off a free kick as the ball went up and over Necaxa goalkeeper Valeria Martinez and found the foot of Lozada.

Necaxa quickly equalized in the 14th minute, with Luciana Garcia putting away a penalty kick. After a scoreless 70 minutes, Cruz Azul found a late game-winner, courtesy of Claudia Cid. The defender converted a penalty kick of her own, giving Cruz Azul a life-saving three points on the table.

Cruz Azul will take on 17th place Puebla in Week 17.

Cruz Azul Playoff Scenario: Another long shot, Cruz Azul sits in 10th place with 18 points. They would need losses from Toluca or Pumas (since they play each other), along with a Tijuana loss. If Cruz Azul and Querétaro are tied with 18 points, as of now, Cruz Azul would advance due to their better goal differential.

Pumas has not had the friendlies stretch of matches in the last two weeks — taking losses to Tigres and Chivas — but they earned a major victory over Atlético San Luis, another team vying for a chance at the playoffs. Those chances still exist for San Luis, but they are slim.

Pumas took three points at home, scoring both of their goals in the last 10 minutes of the match. In fact, it was San Luis that got on the board first, with Itzia Tenahua scoring in the 78th minute off a breakaway and chip over Pumas goalkeeper Melany Villeda. In the 85th minute, Aerial Chavarin equalized for Pumas, picking up a rebound and firing from the top of the box.

The game-winner was scored in the 90’+4′ minute by Natalia Macías Valadez after goalkeeper Ivette Alvarado dove to try to pick up the ball from Lucia Rodríguez. After missing the ball — and the player — Rodríguez passed to Valadez for the easy goal on an empty net.

It’s a major blow for San Luis, but they are still technically in the hunt for a playoff spot — although a lot of dominoes would have to fall. Pumas will take on Toluca in Week 17, and San Luis is facing Cruz Azul, making for prime matchups for battling playoff contenders.

UNAM Pumas Playoff Scenario: This one is a little easier — Pumas needs to win and they are in. Or, if Pumas draws, they need to hope that Tijuana, Cruz Azul or Querétaro don’t win, as they would be up on points. If those teams were to all lose and San Luis would win their game against Querétaro, Pumas would likely advance as their goal differential is 0 to San Luis’ -8.

Atlético San Luis Playoff Scenario: Talk about needing teams to lose. There is no way that Pumas could top Toluca, as the goal differential is too substantial for them to sneak into seventh place. However, eighth place is a long shot, but possible. Atlético San Luis must win against Querétaro, and then cross their fingers that Tijuana, Cruz Azul and Pumas all lose. The only team, right now, that San Luis would top on goal differential if those sides would draw is Cruz Azul (-10 GD).

Club Tijuana is the club of the season that makes you go, “huh?” A team that has most of its points on draws — nine draws makes for nine points — beat C.F. Monterrey, giving the defending champions their first and only loss of the Clausura in Week 12. Tijuana has been slowly climbing back into a playoff spot, but this 2-1 loss at the hands of Mazatlán could ruin their chances.

Connie Caliz scored the opening Mazatlán goal in the 32nd minute, firing a direct free kick into the upper corner of the net. Mazatlán doubled their lead in the 89th minute, with Norma Gaitan picking up a poor clearance and bobble from Tijuana goalkeeper Alejandra Gutiérrez. However, Xolos didn’t permit Mazatlán to have a clean sheet victory, as Inglis Hernández scored off a corner kick in the 90’+8′ minute — after plenty of rebounds and no attempts from Mazatlán at clearing the ball.

Tijuana needs to be careful about facing last-place FC Juárez on Monday. They are the last team to play a Week 17 match, so it all depends on what Pumas and Toluca do in their games.

Club Tijuana Playoff Scenario: The loss to Mazatlán certainly didn’t help their case, and now Club Tijuana needs some extra help. If Tijuana gets a win, and Toluca beats Pumas, they are in, and vice versa (if Toluca would lose to Pumas and Tijuana would win). However, Tijuana also needs Cruz Azul and Queretaro to lose, as all three teams have 18 points. If Tijuana draws, they would be out, due to Pumas’ goal differential. Needless to say, their match against Juárez just became win or go home.

Toluca has been riding a hot-streak in recent weeks. In the last five matches, Toluca has compiled a 3-1-1 record, helping them climb up the table at the death. A road victory would have helped them secure a playoff spot, but the single point leaves them for a (slim) chance of being knocked out.

Patricia Jardón got the visitors on the board first, shooting from outside the box in the 39th minute. Club Leon equalized after halftime, with Daniela Calderón scoring off a tap-in after two Toluca defenders collided while trying to clear the ball. However, Toluca managed to grab the lead once again, with Destinney Duron outrunning her defender and then chipping the goalkeeper in the 79th minute. But, in chaotic fashion, Calderón wasn’t finished, and equalized one more time with a penalty kick conversion.

Toluca Playoff Scenario: A win and they are in, that’s the easy. A draw would also get Toluca through, as their goal differential is -2 — better than the other teams below them (except for Pumas, but they already sit in a playoff spot). If Toluca would lose, they would be in a little bit more trouble, as they would need Tijuana, Cruz Azul and Querétaro to lose as well.

Monday, May 2: Santos Laguna vs. Mazatlán at 8 PM