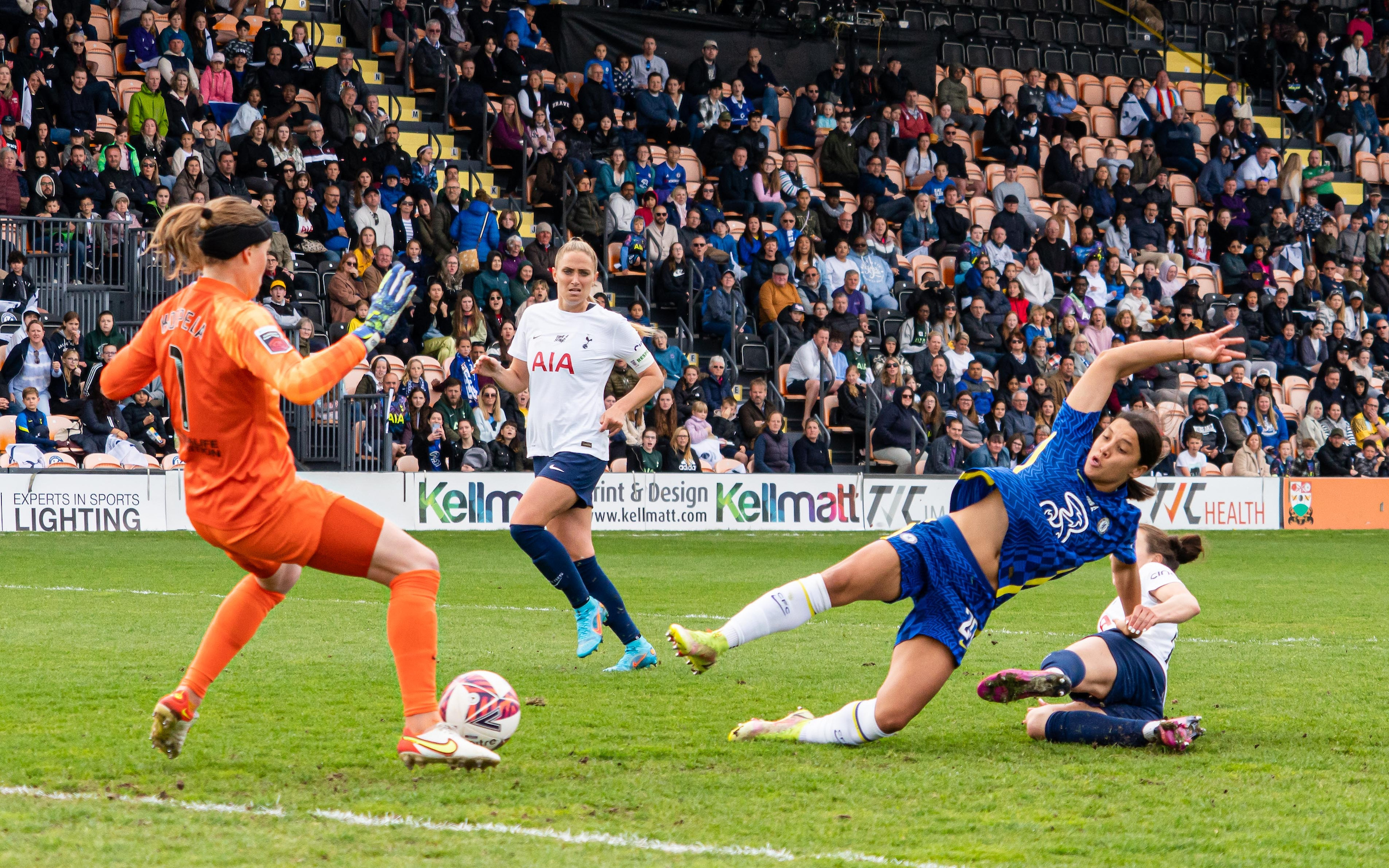 All eyes were on Chelsea this past weekend in the FA Women’s Super League, as the holders continue their pursuit of becoming champions for the third season in a row. Meanwhile, the battle for Champions League spots, as well as the battle at the other end of the table continues to be as tight as ever.

In the face of some stiff adversity, the Blues bounced back to take the win over Spurs on Sunday to stay in control of their title destiny.

An own goal by Chelsea wasn’t the start the visitors had hoped for. Just 15 minutes into the match, a Spurs corner kick hit the post and stayed out, but the ball deflected off of Sophie Ingle and into the back of her own net.

Guro Reiten managed to equalize for Chelsea ten minutes later with a superb sequence of skill. She took Ashleigh Neville on 1-v-1, then – from a very tight angle – managed to chip Tottenham keeper Tinja-Riikka Korpela for the tally.

But the momentum swung back in Spurs’ direction shortly after the equalizer when Chelsea keeper Ann-Katrin Berger came out of her net to challenge Rachel Williams for a loose ball. Disaster struck once again when Berger completely missed the ball and instead sent Williams to the ground. As the last defender back, the keeper was shown a red card, leaving Chelsea with ten players on the pitch. The only saving grace for the Blues was that the foul occurred outside of the area, so only a free kick ensued.

Both sides had chances to go ahead after the sending off, but it was Chelsea who finally scored at the 71st minute mark when a Sam Kerr header came to the rescue. Kerr managed to lose her defender near the Spurs penalty spot and got her head on a cross by Jonna Andersson, beating Korpela.

With Arsenal still hoping for a slip up, Chelsea will play Spurs again on Thursday, before facing bottom of the table Birmingham next Sunday, and Manchester United to finish the season.

Lotte Wubben-Moy signs unique new contract — Gunners centre-back Lotte Wubben-Moy signed a new contract with Arsenal last week, and it seems she had more than money and timing in mind. As part of the England international’s new deal, she “has also committed to working closely with Arsenal in the Community” at the Arsenal Community Hub near Emirates Stadium. Over at The Guardian, Suzanne Wrack reports that Wubben-Moy has “drafted into her contract a 12-week programme that will run four times a year, inspired by her passions and aimed at women and girls in the communities in which she grew up.”

Emma Harries sustains ACL injury — Reading’s Emma Harries will be out for an extended period, as the striker sustained a posterior cruciate ligament injury in England’s recent U23 match against the Netherlands. Harries has notched three goals and one assist this WSL season.

FA Cup Final set — After Chelsea defeated Arsenal, and Manchester City topped West Ham, the FA Cup Final is set! Chelsea and City will duke it out for the trophy on Sunday, May 15 at Wembley. 20,000 tickets have already been sold for the match.

Everton 0, Arsenal 3 — Arsenal’s 3-nil defeat over Everton on Sunday featured milestones for two of the club’s long standing players, as both Beth Mead and Jordan Nobbs recorded their 50th WSL goals on the day. And that’s not all. With her assist on Nobbs’ goal, Mead also became the WSL’s all time leader in assists with 36, surpassing Karen Carney, who previously held the record.

Tobin Heath did not feature in the match after picking up an injury in training.

Manchester City 4, Leicester City 0 — Goals by Caroline Weir, Lauren Hemp, Julie Blakstad, and Alex Greenwood propelled City to a 4-nil win over Leicester on Sunday. It was Blakstad’s first goal for the Citizens after joining the club in January.

Reading 1, West Ham United 2 — Despite a 95th minute goal by Reading, West Ham managed to hang on to the three points on Sunday. It was Hammers defender Kate Longhurst’s 100th appearance for the club.

Brighton & Hove Albion 1, Birmingham City 3 — Birmingham City captain Louise Quinn scored two late goals on Saturday to ensure the three points for her side over Brighton. Quinn – a centre back – now has five goals this WSL season. Most importantly, the win tightens things at the bottom of the table, and gives Birmingham some much needed hope as they fight to avoid relegation. Birmingham are currently in last place, now with 8 points from 19 matches, while newcomers Leicester City sit one place above with 12 points from 20 matches. With just a handful of games to come, the relegation battle looks like it’ll come down to the wire.

United States and Mexico drawn in same group for Concacaf W Championship
Liga MX Femenil, Clausura Week 16: And then there were six!