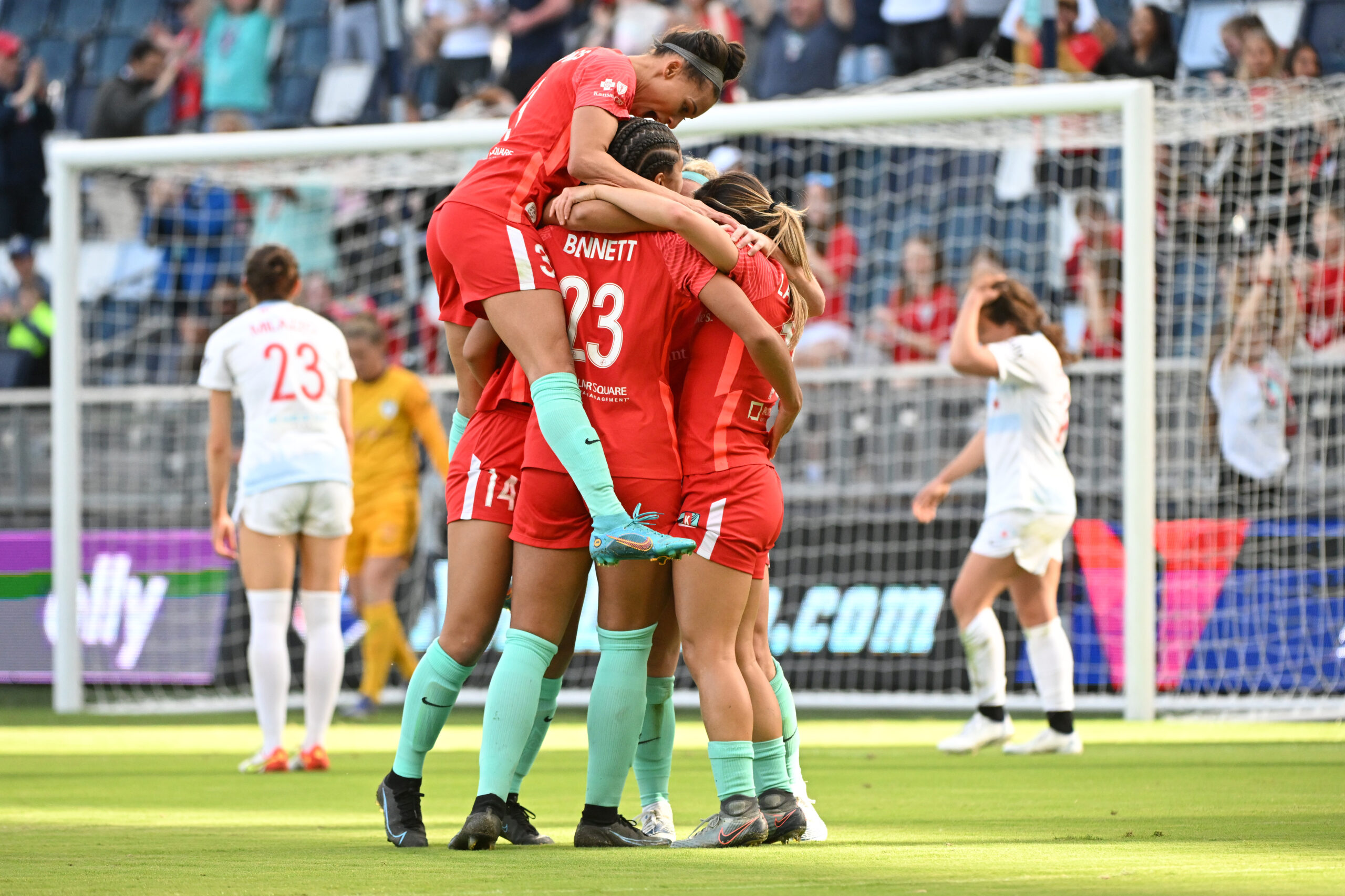 Sunday saw NWSL Challenge Cup matches in the Central and West Divisions kick off, with more semifinal implications. Read on for the day’s results:

The Skinny: The Current only needed one point to advance, but they managed to snag three with a 2-1 win at home over the visiting Red Stars. The win ensured they top the Central Division, and will host a semifinal against North Carolina.

One Key Moment: Rookie Elyse Bennett continued her impressive run of form in the Challenge Cup on Sunday, as she tallied assists on both of Kansas’ goals. The second goal featured a Bennett nutmeg through the legs of Chicago’s Tatumn Milazzo before the ball was crossed to Kristen Hamilton, who beat both Zoe Morse and Alyssa Naeher to the ball for the tap in.

Inside the Game: Speaking of rookies, the Current’s Alexis Loera hit a rocket of a shot past Naeher for the opening goal – her first as a professional. The confidence displayed from both Loera and Bennett on the day are a great sign for this Kansas City side.

On the flip side, Chicago’s equalizer just minutes after the opener came from Bianca St. Georges, who is slowly making her way back into Chicago’s side as a regular. She’s already played more this Challenge Cup (350 minutes) than for the entirety of the last NWSL season (185 minutes).

But Chicago were noticeably missing Mallory Pugh on the day, who is out with a concussion after getting hit in the head last week with a free kick. Besides a chance that was cleared off the line in the 70th minute, they didn’t threaten much for the win.

As for Kansas City, topping the group courtesy of strong rookies performances – while missing two of their star recruits in Sam Mewis and Lynn Williams – is an impressive feat. Their four wins this Challenge Cup already top the team’s three total wins from the entirely of the 2021 NWSL season. Talk about a turnaround.

The Skinny: Angel City earned their first-ever win in franchise history behind a penalty kick conversion by Christen Press. It was arguably their best performance since joining the league and it also knocked the depleted Thorns out of the Challenge Cup.

One Key Moment: This one is quite obvious, it is the game-winning goal. But don’t forget about Vanessa Gilles, who won the penalty kick as a center-back running into the box.

Inside the Game: To start this match, Portland were missing five players and their head coach to COVID protocol, while needing a win or tie to advance to the knockout round. Considering that, they still put a pretty strong eleven out on the field but the cohesion, and finishing ability of Sophia Smith, weren’t there. The Thorns also abandoned the 3-5-2 shape they had used throughout the challenge cup for a more traditional 4-3-3, but still found most of their success through their outside backs. The visitors came out of the gate on fire with five shots in just the first 15 minutes. After that, the craziness died down and Angel City settled into how they wanted to play out of the back despite Portland attempting a high press.

The goal came half an hour in thanks to Angel City’s quality recycling of service into the box, continuously putting the ball in dangerous areas and forcing the Thorns to react. Another great example of this came five minutes later when Gilles got on the end of a cross from Savannah McCaskill. The goal was called back for offsides but the service was dangerous and the numbers in the box were there because Angel City’s players were able to stay higher up the field as they recycled the attack.

It was a strong game from the home side overall. Their midfield of Dani Weatherholt, Cari Roccaro, and McCaskill did a good job of disrupting Portland’s usually a very strong midfield, as well as setting plays in motion, particularly finding their players out wide. One of those wide players, in particular, Simone Charley, had a fantastic game. She had to come off late in the game after a knock so hopefully, for the LA side, she is alright. Their defense was strong, particularly in the second half when they only allowed one shot and were able to clear the rest of Portland’s aimless crosses. Lastly, the expansion side created numerous quality chances for themselves and got them on target. There was some lack in the finishing as they probably could’ve scored 1 or 2 more but they have shown major improvement throughout the Challenge Cup and this is a great result for their morale heading into the regular season.

The Skinny: The Houston Dash took home the 2-1 win over Racing Louisville in a game that featured all three goals in an 11-minute spurt, but was otherwise nothing to write home about.

One Key Moment: The momentum of the game almost shifted in the 71st minute, when Lauren Milliet netted a would-be equalizer for Racing Louisville that was somewhat controversially called offside. Though neither team seemed to react too passionately to the call, commentators and tweeters alike disagreed on the ruling. If the goal had been allowed, there likely would have been a burst of energy to amp up an otherwise-dull second half.

Inside the Game: Going into the game, neither Houston nor Louisville had a chance to advance to the Challenge Cup semifinals, so it felt a bit like a bronze-medal match – but there is mild investment in the outcome. With the Challenge Cup being a preseason tournament, however, there’s still a lot to take away from a game where no one advances. One major takeaway from Sunday’s matchup was the, err, sloppiness from both sides in the first half, and particularly from Louisville.

Houston opened up scoring in the 24th minute when Nichelle Prince capitalized off of a blunder on Louisville’s defense, and Ally Prisock’s goal in the 35th minute looked so close to an own goal that she wasn’t even given credit for the tally until minutes later. This came as a bit of a surprise, as Louisville’s defense was looking pretty solid as of late; leading up to tonight, they’d only let up one goal in their last three games.

It wasn’t all bad news for Louisville, however. Jaelin Howell’s goal in the 29th minute was the first of her NWSL career, and it follows her first goal of her United States national team career, which she scored just two weeks ago in an exhibition game against Uzbekistan. Louisville is set to open their NWSL regular season on Saturday against the Chicago Red Stars, and one would imagine that strengthening their defense will be a top priority.

Although the Dash – who have had a poor start to their year – can take home a morale-booster with tonight’s win, they didn’t play the cleanest game, either. Many of the challenges they’ve endured throughout this Challenge Cup, like defending set pieces, were present Sunday, but they held on, much to the credit of goalkeeper Lindsey Harris, who made a few memorable saves. But, despite finishing on top, Houston still ends their Challenge Cup run in last place in the Central Division. NWSL regular season play begins for the Dash on Sunday, May 1, when they host the San Diego Wave at home. Simply put, they’ll need to be better in the season ahead.