NWSL Results: Three draws see Courage atop the East and OL Reign atop the West 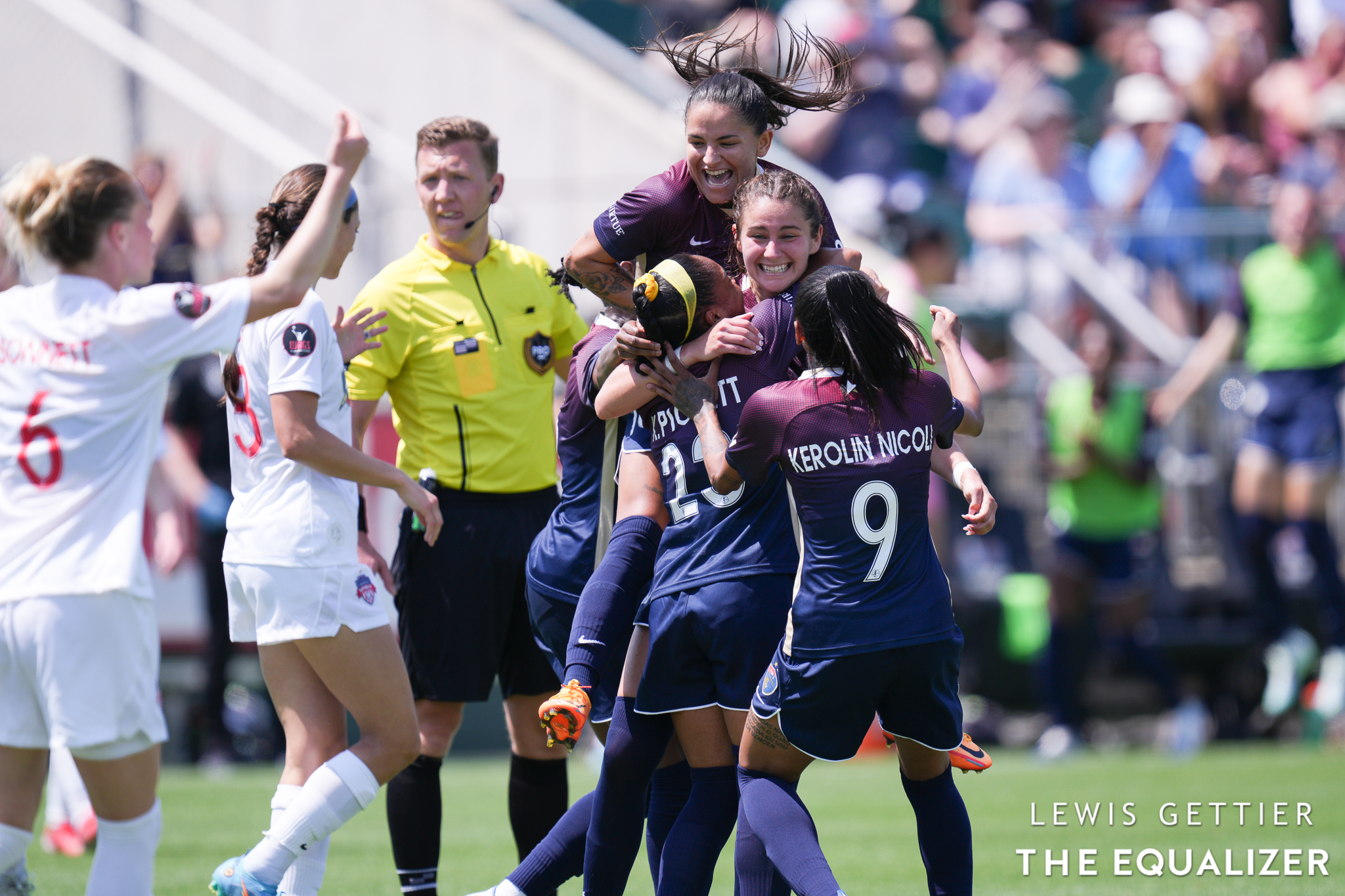 The last weekend of NWSL Challenge Cup group matches kicked off on Saturday, with many important implications regarding who will advance to the competition’s semifinals.

The Skinny: This end-to-end matchup to decide the winner of the East Division was an entertaining one, perfect to be featured on CBS’ main channel. The Spirit needed a win to automatically advance, and looked good at the start, scoring the opener. But as the Courage midfield got more involved, they put themselves on top. Washington was able to equalize late on the night’s third penalty call (the first two going to the Courage) but the draw wasn’t enough. As a result, the Spirit will have to wait for the rest of the divisions to shake out to determine if they will make it through as the top second seed. North Carolina clinched a spot in the semifinals.

One Key Moment: This strike from Malia Berkely is not just gorgeous, but it’s also her first NWSL goal and the tally that earned the Courage the draw and subsequent advancement.

Inside the Game: Alright, strap in because this was a doozy of a game. It’s fair to say that, despite losing some very important starters in Sam Staab and Andi Sullivan, the Spirit came out of the gate hot and the better side. Both teams are high pressers who like to force turnovers when their opponent attempts to play out of the back, and this game was no different. This tactic benefitted Washington first when Ashley Hatch pounced on a poor distribution from the Courage keeper and calmly finished for the opening goal.

After scoring the opener, Washington faded somewhat, keeping their numbers farther back and not pushing as hard offensively. Trinity Rodman in particular was doing a lot of defensive work when they would’ve liked to have her up top to release pressure. Twenty-five minutes in they lost another veteran presence on the field when Kelley O’Hara came off as a precautionary reaction to hamstring tightness. That being said, the Courage played well and grew to control the game with their own high pressure and midfield play. In her first NWSL start, Kerolin wreaked havoc, including earning the penalty in first half stoppage time that tied the game up, and as she continues to get to know the team I have a feeling she will get even better. Debinha converted the penalty earned by her compatriot to show North Carolina’s resurgence in the game on the scoreboard.

After the halftime break, the Courage came out firing and were able to take the lead through Berkely’s terrific goal. They had a chance to double their advantage when Kerolin earned yet another penalty in the 72nd minute, but Debinha’s shot was saved this time by Aubrey Kingsbury.

Only three minutes later, Rodman earned the night’s third PK, Washington’s first, when Katelyn Rowland came out of her net and missed the ball but collided hard with Rodman. The Spirit’s all-time scoring leader further cemented her spot at the top with her second goal of the night by converting the spot kick. The Courage made some sloppy mistakes after this that could’ve cost them the game but in the end they were able to hold on to the point that earned them the advancement.

The Skinny: This match was the epitome of NWSL After Dark. Those watching the stream didn’t get to see Ally Watt’s opener — her first professional goal — but we did see her get called for a handball that may or may not have happened. Regardless, that handball gave San Diego the PK that leveled the score in first-half stoppage time. And it just got chippier from there.

One Key Moment: There is no way to avoid talking about it, the stream was a mess. There was no feed for the first 20 minutes, which means we all missed this incredibly important sequence 13 minutes in. Then, when there was a feed, the quality was low and there was a good portion of the near sideline that for some reason could not be filmed at all. And don’t forget when the production team cut to the stoppage time board instead of showing OL Reign threatening in the 18-yard box off a free-kick. Simply put, this is unacceptable production quality for a professional sports league trying to be taken seriously. But do please enjoy Watt’s first NWSL goal because she seriously earned it after almost two years rehabbing an ACL injury that occurred 13 minutes into her debut back in 2020.

Inside the Game: Other than Watt scoring, we know Kailen Sheridan was given a yellow card for the very bad tackle on Bethany Balcer as she assisted the opening goal. Several players went down from tackles early on and some players felt from the beginning of the match that the ref had no control. Balcer was the hit the hardest, and the most times, so had to be replaced just before the halftime whistle which could be a concern for the Reign, though there were no updates post-match about the injury.

Now, let’s talk about the gameplay we did see. Under Casey Stoney, the Wave are a team that wants to build out of the back through the thirds. The Reign like to press high and force turnovers, like they did when they forced the opening goal. This press was stifling at times for San Diego, who struggled to keep possession but found some success with long balls over the top and when their fullbacks pushed higher up the field. Near the end of first-half stoppage time, the Wave were awarded a penalty kick that was subsequently converted by Alex Morgan. The spot-kick was well taken but the call that led to it is unclear. The handball was called on Watt, who said after the match that the ball hit her face, and looking at the replay it’s a questionable call. All credit to San Diego, who fought hard and created good chances, even probably deserved a goal, but the reffing in this league continues to come into question and both teams expressed their issues with it post-match.

The second half saw the tie hold but there was still plenty of drama. Kelsey Turnbow was issued a yellow card in the 69th minute — one her head coach disagreed with — then 10 minutes later she was issued a second yellow card. The challenge was very late and deserving of a card, but maybe also play should’ve been stopped when the ball hit the ref. It’s a gray area in the rules but either way this left the Wave to close out the match with ten players.

Despite being down a player, the home team played very well and even looked the better side while the Reign hunkered down, looking for the tie that would see them win the division. This game was mostly chaos, but in the end, OL Reign clinched the top seed in the West and San Diego put in a strong performance after their thrashing in Seattle.

The Skinny: Though Gotham looked to be in the driver’s seat in the second half on Saturday at Red Bull Arena in New Jersey, they couldn’t pull out the win against the visiting Orlando Pride and the points were shared.

One Key Moment: Pride keeper Kaylie Collins, in her debut, made the stop of the match in the 78th minute to deny Gotham the three points. With the home side giving Orlando hell throughout the second half, Collins came up big a number of times, most notably with this fantastic, diving reaction save on a flick by Kristie Mewis.

Inside the Game: Gunny Jónsdóttir’s tenth minute goal gave the Pride their first lead of the NWSL Challenge Cup on Saturday. But it wouldn’t last for long, as Toni Pressley took down Ifeoma Onumonu in the box just over a half an hour later, and the referee (rightly) pointed to the spot. Mewis’ calmly taken penalty served as the equalizer and the momentum swung in Gotham’s favour.

Gotham had every opportunity to take the lead in the second half, but couldn’t find the back of the net. The laundry list of their chances included a shot by Kumi Yokoyama that was deflected, the aforementioned Collins stop on Mewis, a crossbar by Paige Monaghan, and one last late chance by Mewis that sailed across the goal mouth but stayed out. But the Pride – to their credit – weathered the storm, and had a moment or two themselves where they nearly stole the game. Most notably, keeper Ashlyn Harris came up big with a kick save after the hour mark to deny Kerry Abello’s shot in front of goal.

With the draw, Orlando snaps their four match losing streak, while – despite having little to show for their efforts – Gotham should come away pleased with their second half display, which was their best of the Challenge Cup.