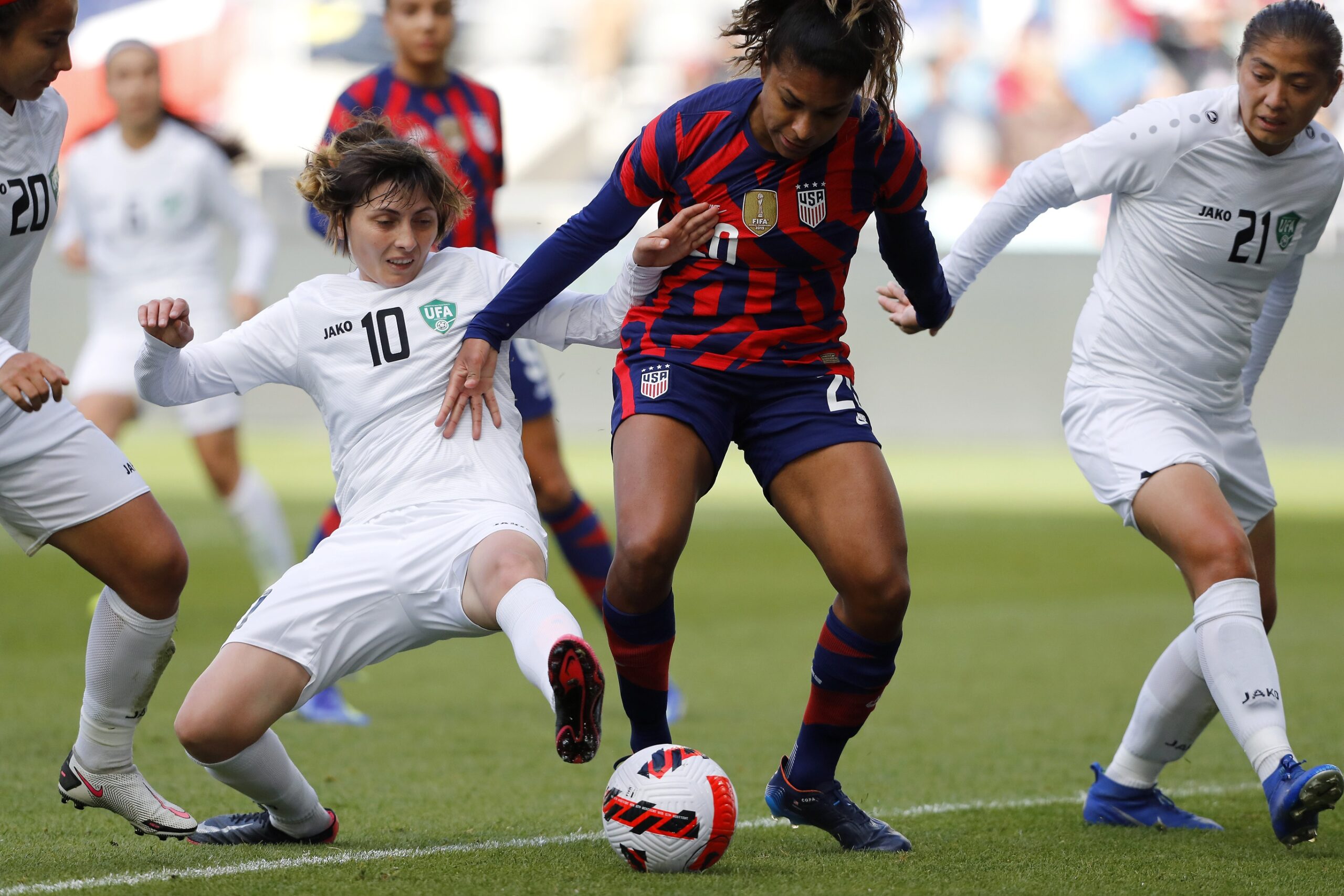 The United States women’s national team defeated Uzbekistan, 9-1 on Saturday in Columbus, Ohio, in the first of two meetings between the teams in four days. The result was never really in question, but there were some surprises in how things played out, from Uzbekistan’s bold defensive approach to a notable defensive lapse from the Americans.

Uzbekistan commits to the high back line

Many teams – especially those overmatched on talent – sit in low blocks against the United States. They absorb pressure and try to force the Americans to creatively find solutions on the ground. Traditionally, the U.S. has struggled to do that, and thus it is a useful tactic for both fellow world elites – see Sweden at the 2016 Olympics – as well as underdog teams. The Czech Republic played that system to perfection at the SheBelieves Cup, earning a scoreless draw against a United States team still trying to figure out relationships with so many new players.

Uzbekistan didn’t even think about that. The visitors set up a high defensive line and frequent offside trap from the start, and they did not relent from it. In theory, it worked for 25 minutes as the Americans tried to figure things out, but the signs were there early that it was a bad idea, and the floodgates eventually opened. Once they did, there was an inevitability to each U.S. attack as Mallory Pugh, Sophia Smith and Catarina Macario ran at space behind. Uzbekistan goalkeeper Tilovova Laylo regularly had to come outside of her box to sweep behind her back line, and on several occasions, she was punished.

That Uzbekistan set up that way – and stuck to it despite its clear shortcomings – was the most surprising part of the night. Will they do that again on Tuesday?

We knew coming into this game that there would be some caveats to any great performances, but the front three of Macario, Smith and Pugh showed again not only how much collective talent they have, but that they can play off each other intelligently and that they are developing strong relationships.

Smith tallied a hat trick, and that was in part a direct benefit of the play of Pugh, who assisted two of Smith’s goals on top of a third assist and scoring a goal of her own. At the SheBelieves Cup, the budding relationship of interest was Macario and Rose Lavelle, who played almost like free-flowing, interchanging 9s and 10s. On Saturday, we saw more of how Macario leading that line looks with Smith and Pugh on the flanks, and it is promising. All three of those players are in form right now for their clubs and country.

Aziza Norboeva will never forget the goal she scored against the United States, and nobody should take anything away from her moment. From a U.S. perspective, it is also a goal not to be forgotten in the short-term when it comes to training and film. Goals conceded are learning moments, and this will serve as one for a relatively young U.S. team. Norboeva was left unmarked inside the six-yard box after the near-post flick on a corner kick. Was that a lost mark or a failure of the U.S.’ zonal system?

Jaelin Howell and Ashley Sanchez each scored their first international goals in the victory, each off the bench. Howell’s, in particular, was a great finish.

We said in the preview that the center-back combination would be an area to watch, especially with only three players rostered for the position. Alana Cook and Abby Dahlkemper went the full 90 on Saturday, meaning Naomi Girma’s international debut had to wait. They did not have a lot to do defensively (although they will be part of the discussion about the breakdown on Uzbekistan’s goal), book Cook had a pair of assists on knock-down headers. Combined with what she is doing for OL Reign, Cook is proving particularly valuable in the air offensively.