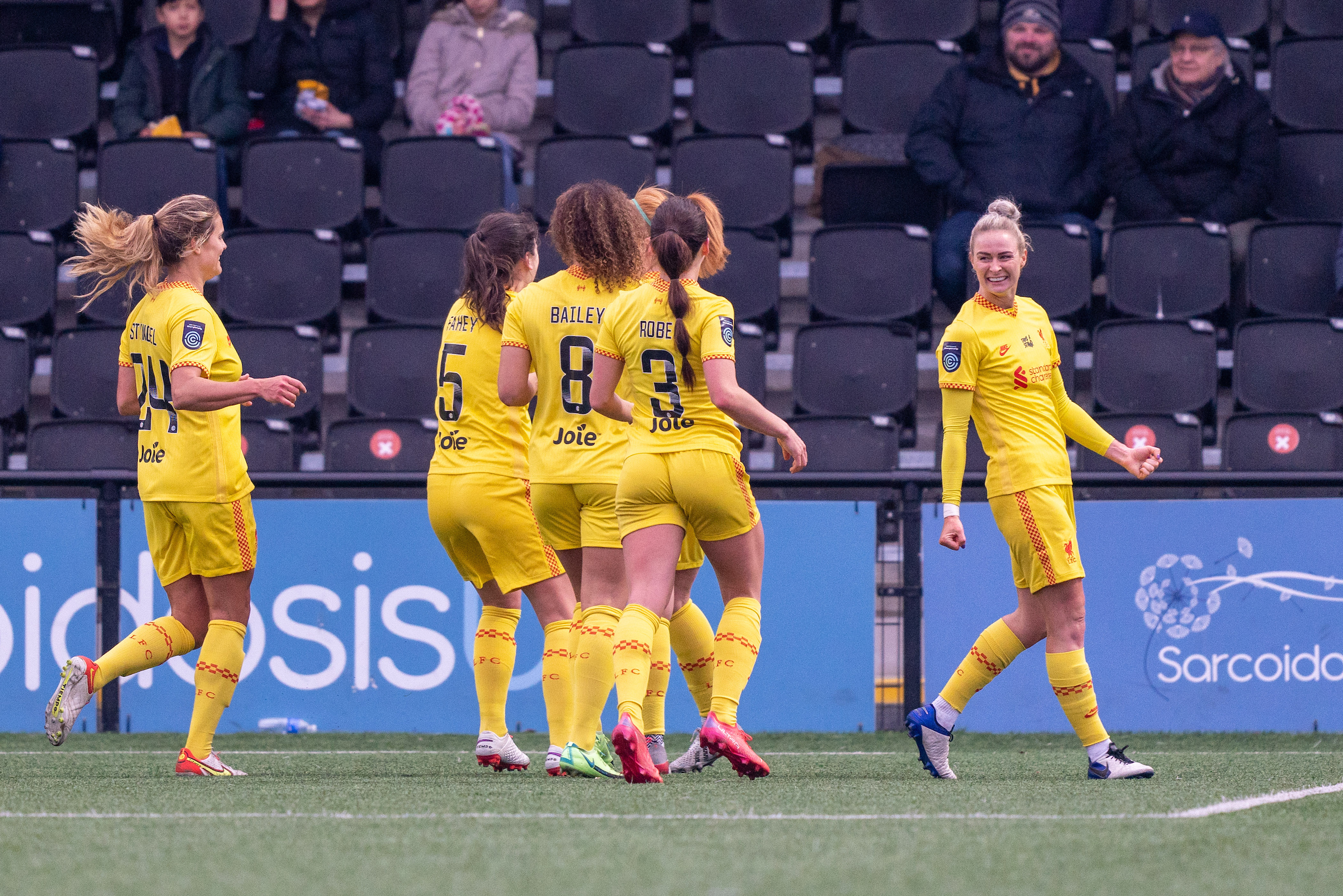 The Reds are back!

Meanwhile, Chelsea won to keep their hold on the title position, and Manchester United kept their edge on City for the all important third Champions League spot.

The biggest result of the week in England came not in the WSL, but in the FA Women’s Championship, the second division of women’s professional soccer in England.

Liverpool – who were famously relegated after finishing last in the WSL in the COVID-shortened 2019/2020 season – defeated Bristol City on the road by a margin of 4-2 on Sunday to earn promotion back to the top flight for next season.

Coached by Matt Beard, Liverpool opened the scoring in the 13th minute, when captain Niamh Fahey got on the end of a loose ball in the box for the lead. But just a minute later, Bristol equalized when keeper Rachael Laws – off her line – was chipped from a wide angle by forward Aggie Beever-Jones.

Liverpool went on to take the 3-1 lead with a close range shot by Jasmine Matthews and a volley by Katie Stengel before the hour mark.

Abi Harrison brought things close once again, finishing a cross to pull one back for Bristol ten minutes later, but Missy Bo Kearns sealed the win for Liverpool with ten minutes to go when she scored her side’s fourth of the day.

After losing the very first match of the season, the Reds went on a 19 game unbeaten streak (15 wins and 4 draws) to clinch the title.

One of the most storied names in the women’s game, Liverpool have won the WSL twice since the league’s inception in 2011. Once hailed as the first club in England to offer their players full time, professional contracts, the club was heavily scrutinized for its lack of investment in their women’s side after being relegated two seasons ago.

Arsenal knocked out of UWCL – A 2-0 defeat to Wolfsburg last Thursday in Germany (3-1 on aggregate) brought Arsenal’s Champions League campaign to an end. An early goal by ex-Gunner Jill Roord put the Gunners behind early, and an unfortunate late own goal by Leah Williamson snuffed out any hopes of a comeback.

100 Days until the Euros – Last Thursday also marked 100 days to go until the 2022 Women’s European Championship. After tickets went on general sale, the final – set to be played at Wembley Stadium – was sold out in less than an hour. Over 350,000 tickets were sold in the pre-sale window, already surpassing the existing record of 240,000 total tickets sold at the 2017 tournament.

Valérie Gauvin signs for North Carolina — After two seasons with Everton, Valerie Gauvin signed with the North Carolina Courage of the NWSL on Thursday. The striker played in 15 WSL matches in the 2020/2021 season and scored five goals, and she appeared in 12 matches this 2021/2022 season.

Chelsea 5, Reading 0 – It took Chelsea forty minutes to open the scoring against Reading on Sunday, but once the first found the back of the net, four others followed. Jessie Fleming got the opener before the halftime break, and Bethany England and Sam Kerr both earned braces in the second half. Chelsea remain one point ahead of Arsenal in the WSL lead position.

Aston Villa 1, Tottenham Hotspur 0 – An 87th minute header by Ramona Petzelberger secured the three points for Villa on Sunday against Spurs. The loss further separates Spurs away from the coveted third place spot.

Arsenal 5, Leicester City 0 – A goal 90 seconds into the match by Beth Mead, and four second half goals (Vivianne Miedema x2, an own goal, and Tobin Heath) secured the win for Arsenal over Leicester.

Manchester United 1, Brighton & Hove Albion 0 – United squeaked out a late win over Brighton on Sunday, courtesy of a Leah Galton goal. It was a hugely important goal to keep United in the race for third place and the final Champions League spot. They own the spot currently, but are just three points up on fourth place City, who have a game in hand.

Manchester City 2, West Ham 0 – Goals by Georgia Stanway and Bunny Shaw earned the win for City on Saturday over West Ham. City’s Chloe Kelly was back in the squad for the first time since May 2021 after suffering an ACL injury.

Birmingham City 0, Everton 0 – Birmingham and Everton played to a scoreless draw on Friday. Birmingham still firmly holds the bottom spot in the WSL table with just five points, while Leicester are one spot above them with 12 points.