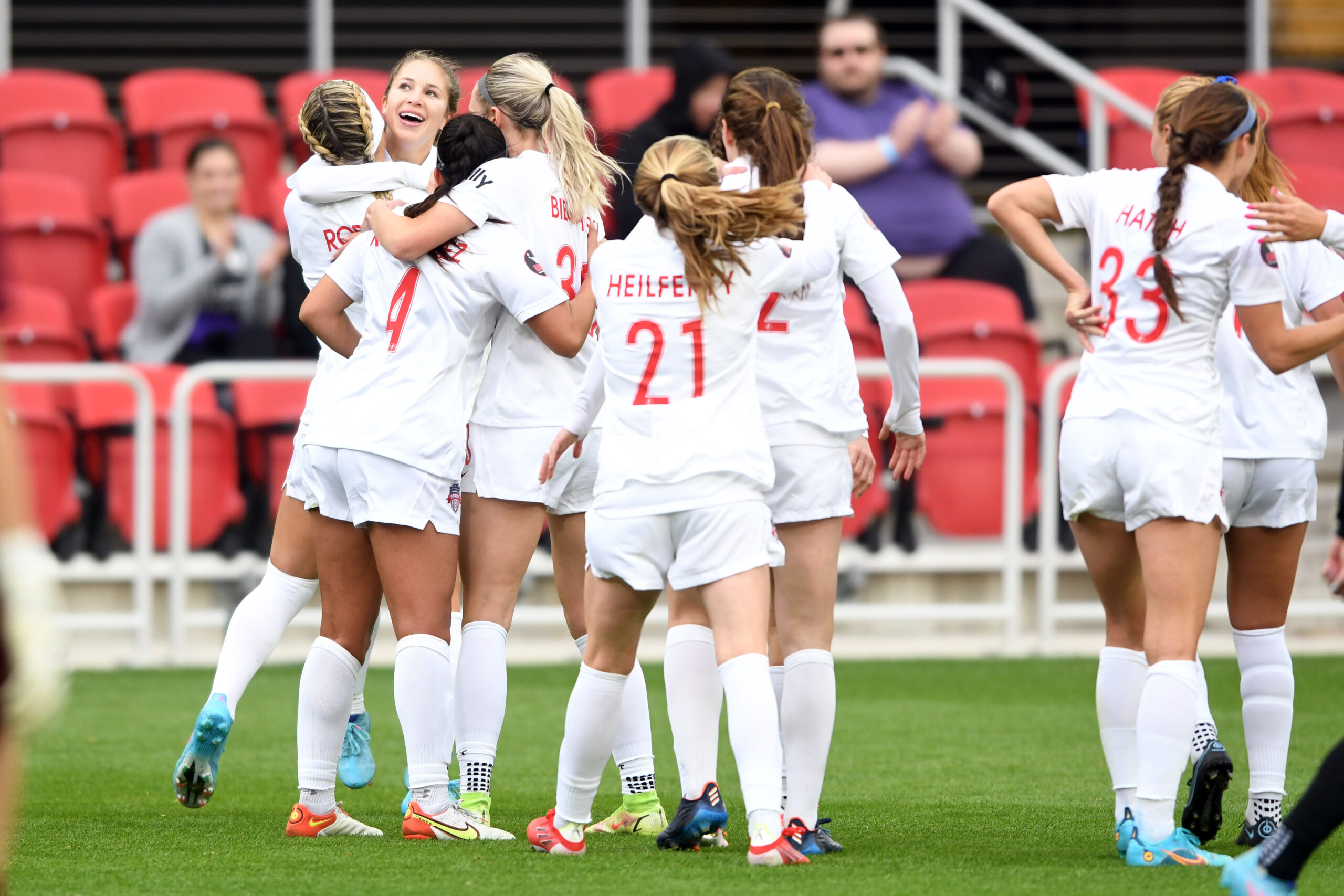 Sunday brought two more games in the NWSL Challenge Cup before the April international break, both in the East Division.

The Skinny: Lifted by a standout performance from 2021 Rookie of the Year Trinity Rodman, the Spirit scored four goals to comprehensively defeat the visiting Pride. The visitors were unable to take advantage of most of their chances, but did finally score their first goal of 2022.

One Key Moment: Washington’s first goal of the match was a well worked team goal, emblematic of how they found success in this match. Their first three goals were very similar, with a turn in the midfield leading to a pass out wide, but only around the edge of 18-yard box, and then an assist across the face of goal.

Inside the Game: Through 40 minutes, this match was very close, with neither side able to capitalize on the opportunities they were creating. Orlando found some success, particularly in between the young center back pairing of Karina Rodriguez and Sam Staab, but simply were not clinical enough when those chances came. The Pride were desperately missing Sydney Leroux’s threat in behind and goal poaching skills as she was unavailable through injury.

On the other side, Washington created many more, and higher quality, chances than the visiting Pride. As per usual the home side were terrific in transition with the interplay of Andi Sullivan, Ashley Hatch, Ashley Sanchez, and Trinity Rodman, who also all scored. The positional movement between these players, combined with their quickness, really caught the Pride sleeping at the end of both halves as well as the beginning of the first. Andi Sullivan’s late run out of midfield to score the second goal, and Rodman’s assist from the opposite side for the first goal, is a great example of their fluidity.

The third goal of the night came similar to the first two, with some wider play on the flanks. The combination of Gunny Jónsdóttir and Meggie Dougherty Howard for Orlando effectively clogged the center of the park, forcing Washington to find the majority of their success down the wings, which they did again here.

Just five minutes later, Jónsdóttir would score the Pride’s very first goal of the year. She was everywhere in this game, disrupting play, creating chances, and in this case, sliding in to poke home the cross from Darian Jenkins.

To cap off a very strong offensive performance, the Spirit added one more goal courtesy of Rodman. This time, the play was more direct, with Kelley O’Hara sending a lofted ball in behind which Rodman finished deftly. With over half their shots on target, and four goals off of those twelve chances, the Pride are perhaps lucky their opponents didn’t score more.

The Skinny: Ifeoma Onumonu headed home an equalizer in the 84th minute to salvage a point for Gotham in their 2022 home debut at Red Bull Arena. Debinha had given the Courage the lead 25 minutes into the match on a spectacular free kick from just outside the 18.

One Key Moment: The aforementioned free kick was vintage Debinha. Just watch and soak it in.

Inside the Game: The Courage came out on the front foot, controlling the center of the park with their signature box midfield against Gotham’s midfield three, who were without McCall Zerboni due to yellow-card suspension. Kristie Mewis went the full 90 for Gotham and delivered the assist to Onumonu via a corner kick. Estelle Johnson was everywhere for Gotham defensively, making several tackles which denied dangerous opportunities.

Kerolin made her NWSL debut for North Carolina in the second half and nearly got on the scoresheet right away, hitting the post from close range. Rylee Baisden started up front for North Carolina, with Meredith Speck slotting into the other No. 6 role alongside Denise O’Sullivan.

Margaret “Midge” Purce also missed a tap-in at the back post in the first half which would have served as an early equalizer. Gotham pushed on for a winner following Onumonu’s late tally, with head coach Scott Parkinson saying that he wanted to practice what they preach about “fearlessness,” a word he used several times postgame.