UWCL: Barcelona advances to semifinals in front of 90,000-plus at Camp Nou; PSG top Bayern in extra time 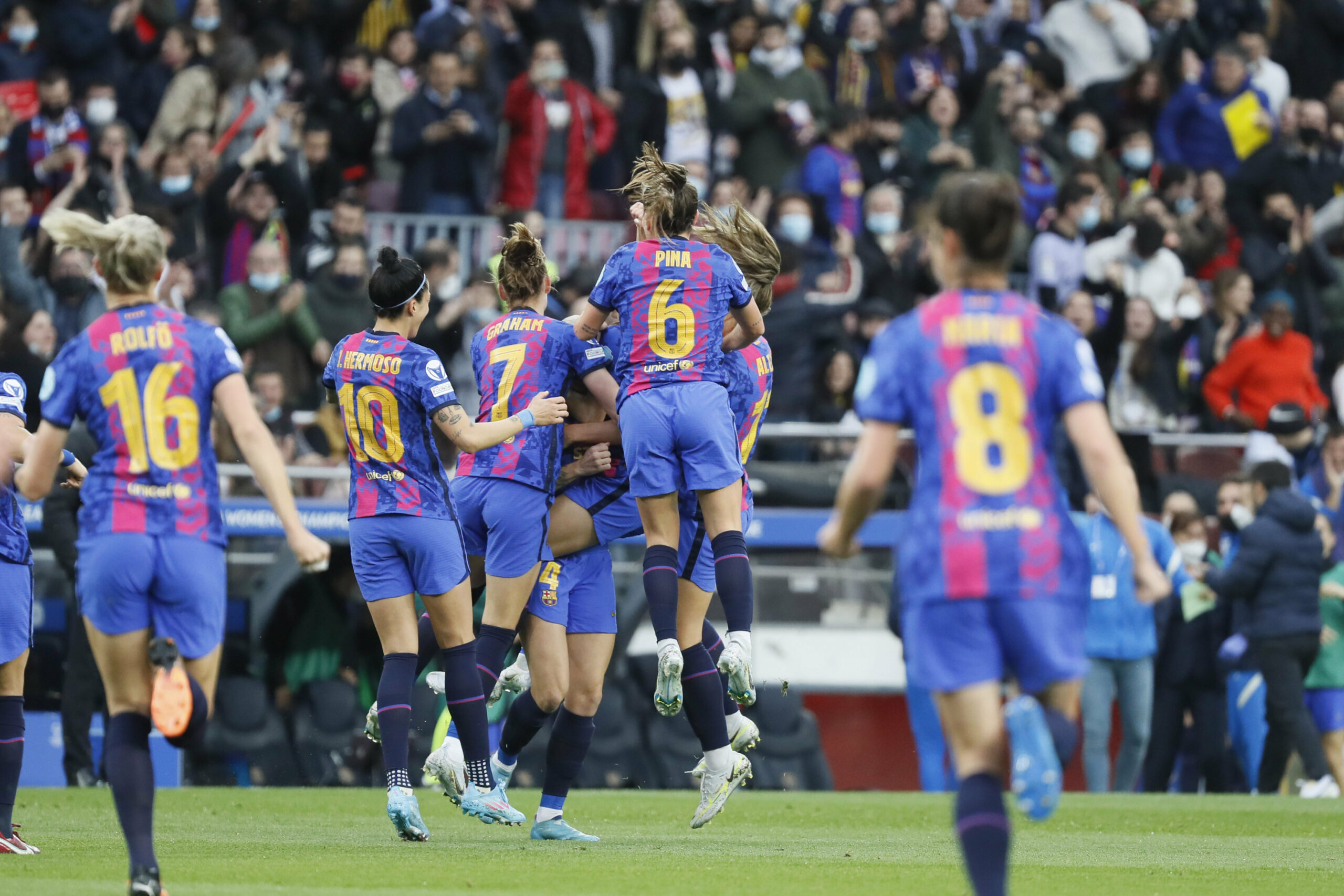 Barcelona advanced to the UEFA Women’s Champions League semifinals in dramatic fashion over Real Madrid on Wednesday. Meanwhile, Paris Saint-Germain punched their ticket to the semifinals with an extra time win over FC Bayern Munich. Here’s what went down as the first two semifinalists were determined:

Reigning UEFA Women’s Champions League title-holders FC Barcelona advanced to the semifinals of the 2021-22 competition on Wednesday with a wild, 5-2 victory over rivals Real Madrid in front of 91,553 fans at Camp Nou. The emphatic victory saw Barcelona advance 8-3 on aggregate after winning the first leg. The crowd is a record for a women’s professional club soccer game.

Barcelona center back Mapi Leon opened the scoring eight minutes into the match on a mishit cross which turned into a stunning strike, but Olga Carmona scored from the penalty spot eight minutes later to get a goal back for Real Madrid. The score stayed that way — 1-1 on the day and 4-2 on aggregate — until halftime. Then came the magic.

Claudio Zornoza scored one of the best goals of the competition just three minutes after halftime to briefly give Real Madrid hope. Zornoza caught Barcelona goalkeeper Sandra Panos off her line from some 40 yards out.

Real’s hope lasted only four minutes, however. Aitana Bonmati equalized for Barcelona, and then Claudia Pina scored a stunning goal of her own to put Barcelona ahead on the day and likely out of reach on aggregate.

Ballon d’Or winner Alexia Putellas added a fourth goal for Barcelona in the 62nd minute, and Caroline Graham Hansen finished the scoring in the 70th minute.

Barcelona will play either Arsenal or Wolfsburg in the semifinals.

The 91,553 fans on hand for the match in Barcelona bested the attendance for the 1999 Women’s World Cup final in Pasadena, California, which saw 90,185 fans witness the U.S. lift the title. Prior to the FIFA era of sanctioned women’s soccer, a women’s world championship in Mexico drew 110,000 fans to the final, in which Denmark defeated the hosts.

Paris Saint-Germain hosted the second leg of their quarterfinal clash with FC Bayern Munich. Bayern came into the match with some players out of commission due to a COVID outbreak. However, Bayern put up a big fight against PSG, forcing the match to go to extra time. PSG, in extra time, managed to score in the last 15 minutes, preventing penalties.

Entering the match, PSG was up on Bayern, 2-1, on aggregate. Sandy Baltimore gave PSG a cushion with a goal in the 17th minute at home, shooting from outside the box and close to the touchline — all on a tough angle.

Bayern pulled one back, almost immediately, in the 19th minute, courtesy of Saki Kumagai. The Japanese international picked up the rebound after Barbora Votíková made a diving save on a free kick chance. Bayern then equalized the match on aggregate, with Klara Bühl firing inside the box and past Votíková.

PSG got the last laugh, though. After the match ended with a 3-3 aggregate scoreline, the teams took to the pitch for 30 more minutes of action. After a scoreless first 15 minutes, the second half of stoppage time produced the game-winning goal, courtesy of 93rd minute substitute Ramona Bachmann. The 31-year-old from Switzerland dribbled through four defenders, inside the box, and then fired past Janina Leitzig.

PSG will go on to face the winner of tomorrow’s Juventus vs. Lyon match. The Italian side currently boasts a 2-1 aggregate lead.

Still no deal: US Soccer, USWNTPA hopeful for new CBA in April
Lyon, Wolfsburg advance to UWCL semifinals with victories over Juventus, Arsenal