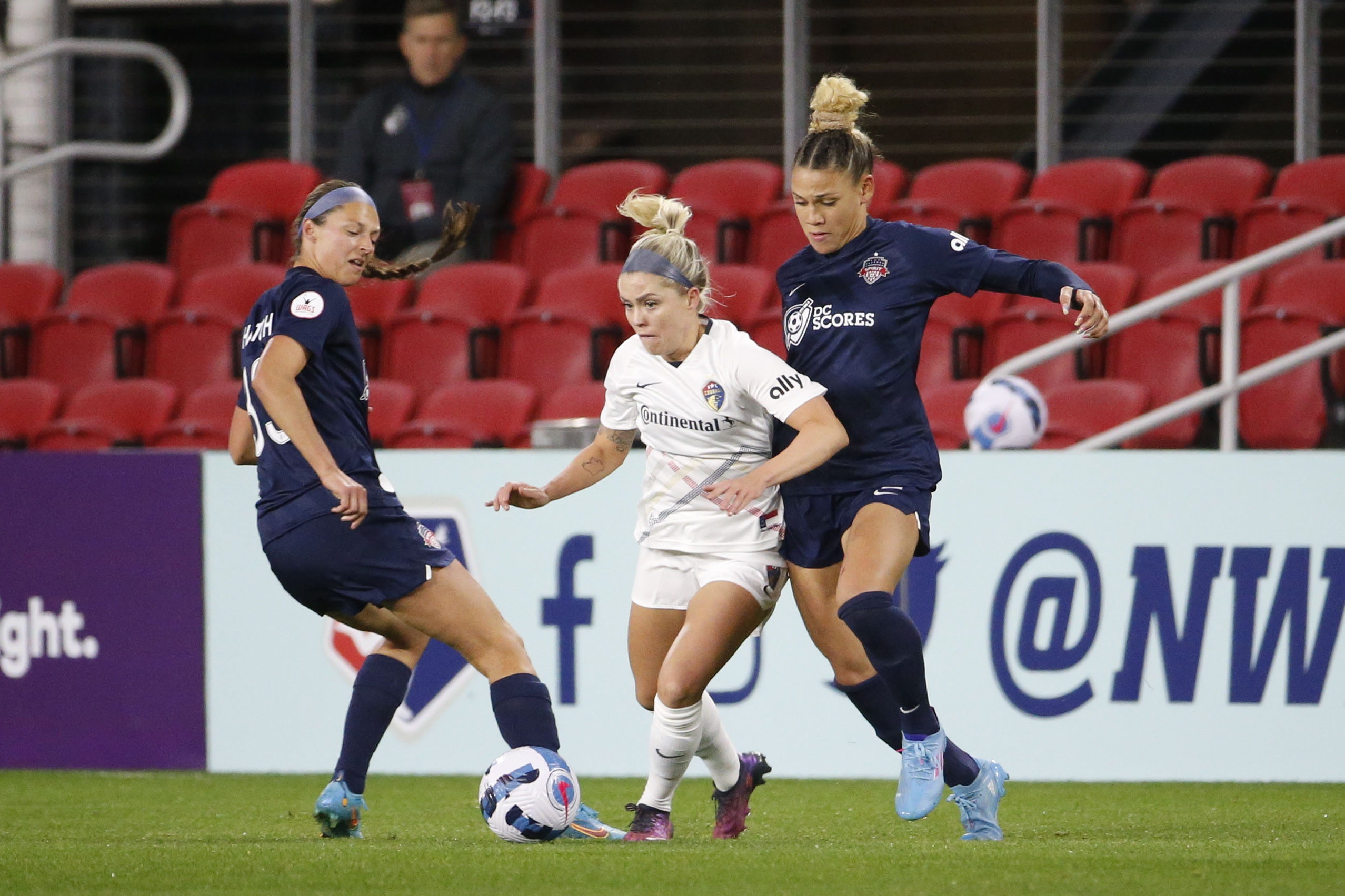 The Skinny: North Carolina scored twice early in a quest to win a third game in a row to start the 2022 NWSL Challenge Cup, but the Spirit scored twice in the second half and nearly found a winner late.

One Key Moment: Trinity Rodman’s goal in the 58th minute started the comeback for Washington. Courage defender Merritt Mathias backed off to give Rodman ample space in the box for the finish.

Inside the Game: The Spirit came out flat and got exposed in transition, with the back line sitting too high, on multiple occasions in the first half. Debinha stepped in after missing North Carolina’s last match and scored in the opening minutes on a rebound, but Taylor Smith’s 26th-minute goal better exemplified the Spirit’s issues. Kelley O’Hara’s pass to Anna Heilferty put Heilferty in a tough spot and led to a turnover. Carson Pickett quickly picked her head up and found Smith in a pocket between Washington’s stretched line.

Washington turned things around in the second half with better energy and wide play. Rodman began to take control of the flanks, and the Courage didn’t have much of an answer. What had been a resolute defensive performance from North Carolina deteriorated as the game went on, as evidenced by the Spirit’s equalizer. Julia Roddar had a significant amount of time on the left flank to pick out Ashley Hatch with a cross, and Hatch buried it for the equalizer 10 minutes after Rodman’s tally.

The Skinny: Kansas City jumped on Houston early and never looked back, securing the team’s largest margin of victory in the Current era.

One Key Moment: Taylor Leach set the tone early with the fastest goal in Challenge Cup history, volleying a driven corner kick from Hailie Mace in the 2nd minute.

Inside the Game: Kansas City, on the heels of the disappointing news that Lynn Williams is out for the season — and also missing Sam Mewis on the night — rolled out a five-back which appeared to rattle the Dash. Elyse Bennett had two assists on the night in her start up top and was unlucky not to get on the scoresheet. She also got in behind in the first half and saw her 1-v-1 shot denied by Dash goalkeeper Jane Campbell, who handled the ball outside the box to make the save but was not whistled for an infraction. Houston was lucky not to play most of the match with 10 players.

Lo’eau LaBonta continued her hot start to the season with a goal in the 60th minute that sealed the result from Kansas City. The Dash moved Sophie Schmidt back into the midfield and started Julia Ashley alongside Katie Naughton at center back, but defensive issues remained. Three games into the Challenge Cup — which Houston won in 2020, the inaugural edition — the Dash have conceded eight goals.

The Skinny: Three of the Thorns’ first-round picks from the last three NWSL Drafts scored in this match to defeat Angel City in Portland’s first game of the year at Providence Park.

One Key Moment: Sophia Smith has now scored back-to-back game-winners. She has cemented herself as the present and future of Portland’s attack, and her goal in the 31st minute shows why.

Inside the Game: Angel City, similar to their last match, started promisingly, creating good chances through their wingers and wreaking havoc with Christen Press. When they had possession, June Endo created confusion for the Thorns defense with her movement in the half-space, capitalizing with her creativity. Despite this strong start, Smith opened the scoring half an hour in for Portland.

Portland’s current go-to 3-5-2 continued to cause problems for teams trying to penetrate centrally. Their superior central numbers and high-playing wingers made it incredibly difficult for Angel City to play out of the back like they wanted to. Natalia Kuikka in particular continues to be essential to Portland, offensively and defensively in this setup. It was her shot that was bobbled in the 53rd minute, allowing Yazmeen Ryan to blast home the Thorns’ second goal of the night.

The home side continued to dominate the match and added a third goal in the 78th minute to guarantee the victory. Morgan Weaver, who was drafted second overall behind Smith in 2020, scored from outside the box.

The Skinny: Despite a strong home showing, the Pride were beaten at the end by Midge Purce’s late goal.

One Key Moment: This brilliantly worked game winner, from the throw in, gave Gotham their first win of the 2022 Challenge Cup.

Inside the Game: Wednesday’s match in Orlando was a close one until the final moments. Both sides created numerous chances but the breakthrough wouldn’t come until almost the end of regulation time. The Orlando Pride had a strong showing, controlling a majority of the possession, creating more chances and winning twice as many duels as their opponents. Sydney Leroux in particular caused problems for the Gotham backline, as they had to drop back to account for her speed, which left space between the lines for the Pride midfielders to drive into. But in the final third, creativity and problem solving were missing on the day. Orlando’s lack of clinical finishing was apparent, as just two of their 23 total shots landed on target.

Gotham had similar issues in the final third, with their best chances coming on the counterattack. But through some intelligent play from Gotham’s forwards, a quickly taken throw-in caught the Orlando defense too high up the pitch, leaving just enough space in behind for Purce to run into and brilliantly finish past an onrushing Anna Moorhouse.

The Skinny: The Chicago Red Stars and Racing Louisville played 90 minutes in the rain, and neither side found a goal on Wednesday night, splitting the points.

One Key Moment: Right before the halftime whistle blew, Emina Ekic had the golden opportunity of the match. However, her shot smacked off the crossbar and out. Chicago goalkeeper Alyssa Naeher was nowhere near the ball, so if the shot was aimed a little further down, Louisville would have all three points.

Inside the Game: Naeher was busier than Louisville goalkeeper Katie Lund, but both players managed to keep a clean sheet. Naeher faced five shots on goal, with three of those coming from English international Ebony Salmon. Meanwhile, Chicago had two shots on goal, with Sarah Griffith and Yuki Nagasato – who played for Racing Louisville in 2021 – threatened goal.

For the most part, the match was relatively back and forth. Nagasato was given a yellow card in the 21st minute, but that was the only disciplinary action from head referee Calin Radosav.

Lauletta: Injuries take center stage at NWSL Challenge Cup
Lauletta: How the Current made all the winning moves against Houston