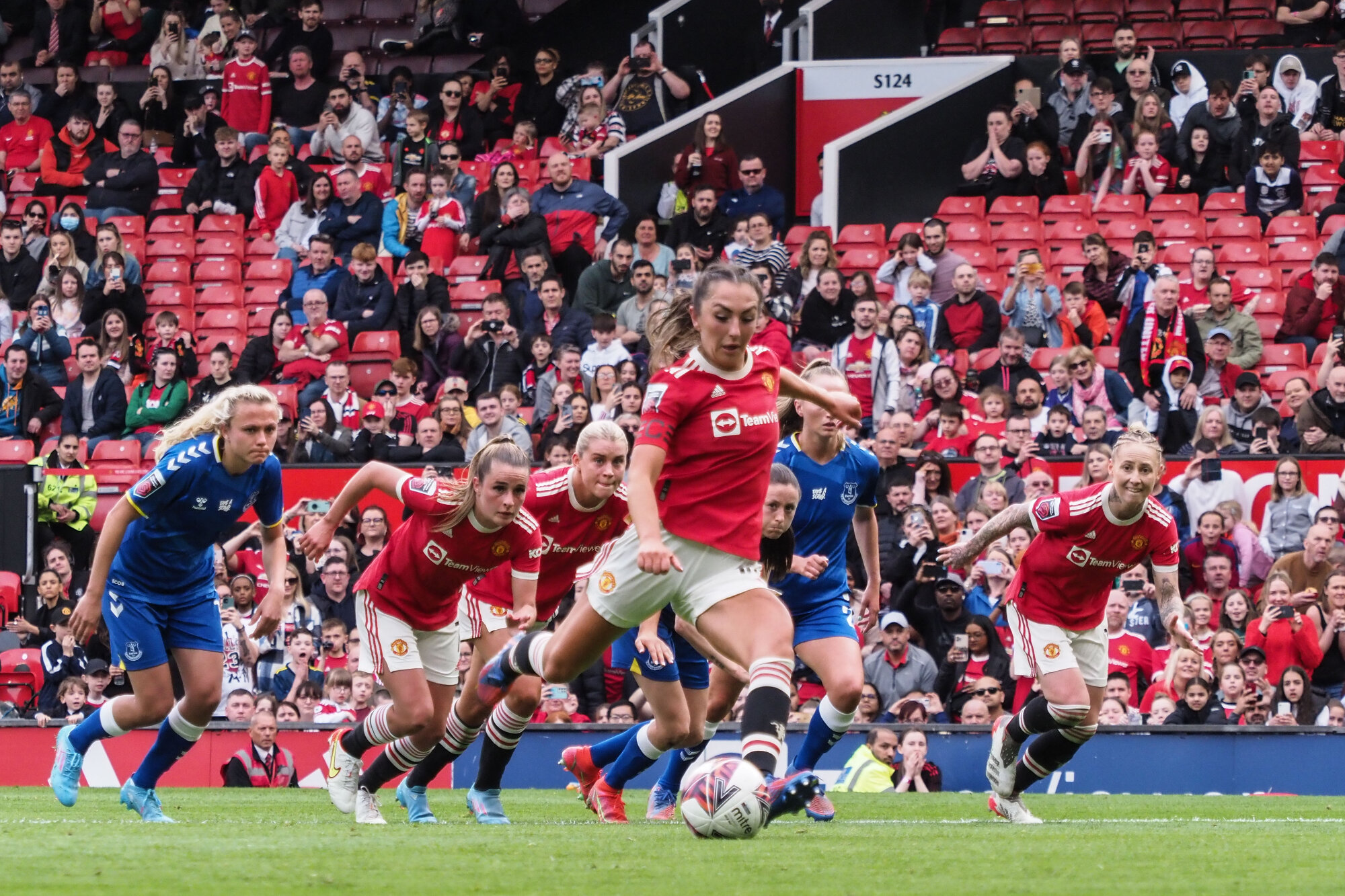 After seven months of FA Women’s Super League action, Chelsea are on top of the table for the first time this season.

A thorough defeat over Leicester City saw the defending champions climb to the top of the WSL standings for the first time this season. After making up a number of matches, the Blues now lead Arsenal by one point, and both squads have just five matches remaining.

Meanwhile, Manchester United and Manchester City are still neck-and-neck for the remaining Champions League birth. Read on for all of the week’s news and highlights!

Chelsea shocked Leicester on Sunday by putting four goals away in the first 11 minutes of the match. Player of the match Guro Reiten kicked things off early just minutes after the whistle with a superb free kick that bent around Leicester’s wall and beat a diving Demi Lambourne. The flood gates opened from there, with goals from Sam Kerr (x2), Bethany England (x2), Aniek Nouwen and Lauren James (their first goals for the Blues), a second for Reiten and a final goal from Jessie Fleming, bringing the total on the day to nine.

Everton shocked the home fans early, when Claire Emslie raced down the wing on the counter and snuck in a low shot past Mary Earps. Emslie’s knee-slide in front of United’s 20,241 fans was a fitting celebration for the day.

But after Everton’s goal, United knocked on the door for a half hour before equalizing. Ona Batlle sent in a cross towards the goal area, and Alessia Russo rose above her defenders to float a header over Everton keeper Sandy MacIver.

Captain Katie Zelem put United went ahead after the halftime break when she calmly converted a penalty kick after Lucy Graham fouled Martha Thomas in the area. And it was Russo who added a second with her head just minutes before the full time whistle.

Arsenal draw Wolfsburg in UWCL action — Arsenal rescued a late draw on Wednesday in Leg 1 of the Champions League quarterfinals. Tabea Waßmuth scored early to give Wolfsburg the edge, but a dramatic 89th minute equalizer by Lotte Wubben-Moy saved the day for the Gunners. The match was played at the Emirates Stadium in London in front of a disappointing turnout of 5,018 fans. Leg 2 will be played this coming Thursday in Germany.

Brighton & Hove Albion 2, West Ham United 0 — Aileen Whelan’s calm finish gave Brighton the early lead on Sunday against West Ham, and Inessa Kaagman put a second away in the 81st minute to secure the win. After working through a rough patch from mid-November through to mid-February (six losses and one draw in this period), Brighton have gotten themselves back on track, recording three wins and one loss in their last four WSL matches.

Aston Villa 1, Reading 1 — Villa and Reading earned a point a piece on Saturday, with each team recording second half goals. Reading’s Justine Vanhaevermaet converted a penalty kick with ease shortly before the 70 minute mark, but Villa tied things up just minutes later with a lovely back-post header from Ramona Petzelberger.

Manchester City 4, Everton 0 — An own goal by Simone Magill, and goals from Ellen White, Alex Greenwood, and Laura Coombs secured the 4-nil win for Manchester City over Everton in mid-week WSL action.

Chelsea vs. Tottenham Hotspur (Wed. Mar. 23) — Postponed due to COVID positives in the Spurs squad

Arsenal vs. Tottenham Hotspur (Sat., Mar. 26) — Postponed due to COVID positives in the Spurs squad

Manchester City vs. Birmingham City (Sun., Mar. 27) — Postponed due to COVID positives in the Birmingham squad